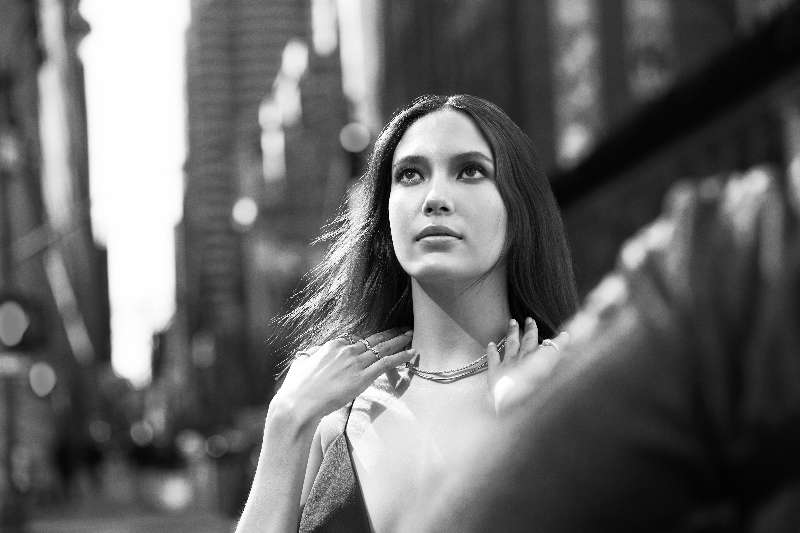 Grit meets glamor in Tiffany & Co.’s latest — and perhaps most unique — collection. Named the Tiffany Knot, sleek curves intermingle with jagged angles to create bracelets, rings, necklaces, pendants, and earrings in 18k yellow and rose gold. The hero piece is a stunning double-wrap choker that is handset with more than 300 diamonds, a testament to the brand’s design ingenuity.

In a nod to New York, the collection draws inspiration from an unlikely source: the chain-link. Whereas some see a symbol of division, Tiffany reclaims the structure to represent strength, rebellion, and unshakable bonds. Here, the American jeweler transforms the industrial shape into something classy and captures the tenacious spirit of its hometown.

But how does Tiffany then take this unapologetically New York-flavored collection and market it to China? The answer lies in its ambassadorial appointments and the timing of the campaign launch. On February 8, tens of millions of people rushed online to celebrate freestyle skier Eileen Gu winning her first gold medal and recognized the Tiffany rings that she wore during the Games. This sensation brought Tiffany terrific organic traffic overnight.

On February 23, with the end of the Olympics closing ceremony, Tiffany officially released its new campaign featuring the champion skier, in which she navigates the bustling streets of the Big Apple decked out in the new products. The campaign has been seen on all mainstream social platforms — including UGC content and digital media coverage — on Weibo, WeChat, Douyin (the Chinese version of TikTok), and Xiaohongshu. Thanks to the online discussions accumulated during Winter Olympics, the grand launch scored positive feedback from local audiences. After being posted on Weibo, the video garnered over 20 million views, within two days.

Signed as an ambassador last summer, Gu builds on the brand’s message of bold individuality. Below, Jing Daily breaks down the success of Gu’s appointment and Tiffany’s broader celebrity endorsement strategy in China.

Getting ahead of the curve

At just 18 years old, Eileen Gu already has an enviable list of accolades, from taking home three medals at the Winter X Games Aspen in 2021 to fronting the cover of Vogue China’s Gen Z publication Vogue Plus. Born to a Chinese mother and an American father, the Asian American teen is beloved by both Chinese and American fans. It doesn’t hurt that she has runway model looks and is fluent in Mandarin.

While many companies want to work with Gu now — in fact, she currently endorses at least 23 labels — Tiffany gained major benefits by being the first luxury name to jump on the opportunity. Since June 2021, the popular Gen Zer has starred in the jeweler’s “Give Me the T” campaign and showcased various pieces on her Instagram. As such, when she later won her first Olympic gold medal on February 8, it was Tiffany that saw a surge of traffic to its social media channels, highlighting its foresight in discovering emerging talent.

Even before the post of Gu wearing the Knot Collection was officially published in China, it had circulated widely online via her Instagram account. This, plus a collaboration with fellow Tiffany brand ambassador Jackson Yee in their Beijing Winter Olympics campaign video, has helped the jeweler go viral. Jackson Yee is also a Chinese A-list celebrity dedicated to music, dance, and acting, with over 89 million followers on Weibo. When the brand finally dropped Gu’s Knot campaign assets earlier this week, netizens ate it up: on Weibo, the campaign hashtag #TiffanyKnot has racked up 170 million views while Xiaohongshu is flooded with UGC posts sharing Gu’s style choices.

Looking ahead, Tiffany’s collaboration with the freestyle skier should continue to do well as China ramps up the growth of its winter sports market. In January 2022, the country reportedly smashed its target figure of having 300 million engaged in snow and ice activities. In fact, Trip.com noted that from last November to January, booking for ski resorts nationwide jumped by a staggering 363 percent compared with 2020, reiterating this newfound enthusiasm. With Gu’s name synonymous with the industry, fans will be looking to her for both skiing and styling inspiration, which is sure to keep Tiffany in the spotlight, too.

No matter the industry, Tiffany has a knack for picking out trailblazers. In addition to Gu, the brand has also teamed up with Anya-Taylor Joy, star of The Queen’s Gambit, to also promote its Knot collection. Although the hit Netflix show is not officially available in China, the campaign video featuring Joy has garnered over 22 million views since it was released on Weibo, with netizens gushing over the beauty of the actress and the accessories.

Ultimately, Tiffany demonstrates the continued importance of celebrity partnerships for boosting publicity and strengthening emotional ties with consumers. Through Gu, the Knot collection will not only reach a larger audience in China, but also deliver a universal narrative — one that celebrates a strong sense of self.