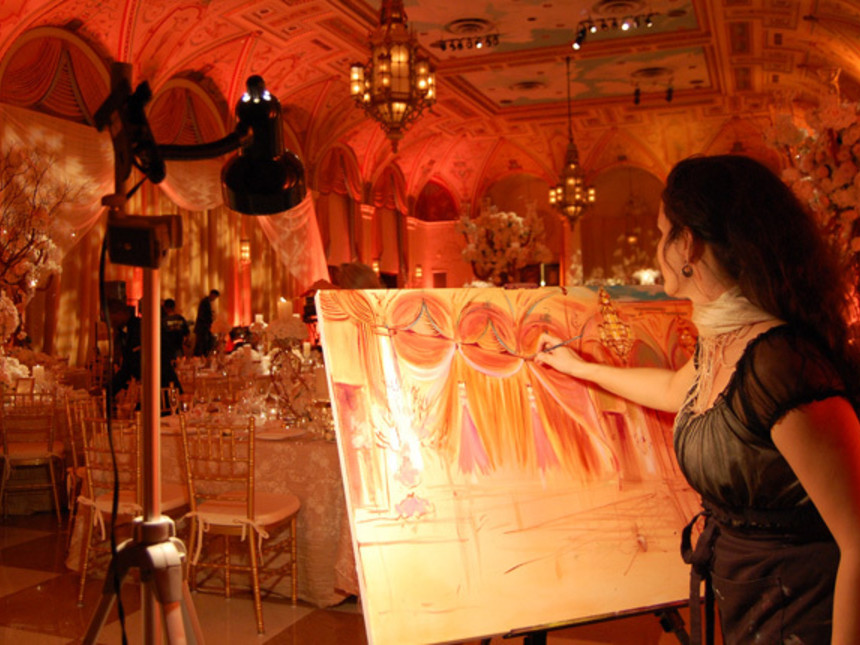 Getting married in Italy in the ‘80s was easy. I mean organizing the event was easy, not finding a husband or wife. There were a few elements: dress, invitations and participations, church, gift registry, reception, wedding favors (bomboniere), and that was that. The big dilemma was whether the parents or the couple announced the wedding but apart from this, choices were simple and required a short preparation time that went from a few months to a year.

Even “the most important day” unfolded with always the same cadence: hairstylist, make-up artist, photos at home, arrival at the church, ceremony, photos, reception, wedding favors, everybody home.

In the USA it is a whole different story, made of hundreds of small and big things, a process starting even before the engagement and proceeds like an avalanche. In all rom-com we see a man hiding the box with the ring and then surprises the girl with the fateful question in which, after the declination of her complete name – so it will be more binding and certain? – he asks her to marry him. The girl opens her eyes wide, expresses at least one: “Oh my God”, followed by: “Yes yes yes” (at least three times) and then a sweeping embrace.

The foreign spectator, however, does not know that, in reality, the ring has not been purchased by the now fiancé unbeknownst to the girlfriend. As soon as she perceived there was a proposal in the air, she gave exact directions on size, mounting, cut, and color and some, just to be sure, accompany their boyfriend shopping for the ring. If In Italy the man received a watch in exchange – maybe a warning of future regulated days? – in the USA he receives nothing but a kiss from his girlfriend. From that moment, the girl starts a subscription to a nail salon to be ready for the awaited moment of a proposal.

Once the ring is purchased, often a true economic investment, if some are happy proposing during a romantic dinner, other resort to a flash mob: a group of people, from a few dozens to a few hundred, all of a sudden get together in a public place, from a shopping mall to a beach to a square, and perform a synchronized dance and, at its peak, he pops the question. This high-impact event has a relevant cost of several thousands of dollars but relatively easy to organize because these groups can be hired online through agencies which also offer photo and video work of the event. Like all fads it is losing ground to trips and travels to places like the spur of a mountain in a national park, an exotic beach or iconic locations like the London parliament or the Eiffel tower for elaborate proposals in which the bride to be is “surprised” with the presentation of the ring amid photographers’ flashes and videographers. The fiancé will have made sure they are both elegantly dressed from head to toes, she had a manicure that very day, and every detail was cared for as one of the photos will likely be used on the Save the Date cards which are mailed even a year in advance so that guests can put the date on their calendar.

From this moment begins a series of engagements. The first option is whether to use a wedding planner or organize everything on one’s own. The choice is often for the first because the future bride has a full-time job and, most of all, she wants everything to be just perfect. To this regard, in 1995, journalist Diane White, combining the word bride and the name Godzilla (the big lizard monster), coined the term Bridezilla to describe the efficient and demanding bride, obsessed with every tiny detail to each of which she dedicates hours and hours so that the event that will see her as the protagonist is just perfect. In recent times, there are also some groomzillas, future grooms just as obsessed with the event. The first choice to be made, location. Will it be a destination wedding somewhere in the world, from Fiji to Florence, or a local event on the beach, among sequoia trees, or underwater?

Having chosen time and place, it is time to set up a registry on the couple’s website. Until not many years ago, the registry was usually set up in a brick and mortar store and was just a little of possible presents. Today the registry, with all presents to be purchased online, also includes photos of the couple, details on their love story, as well as information on what to see and do in the city for guests coming from out of town. At the same time, the bride will start looking for her dress (es). Shops overflow with tulle and laces, dresses that go from a few dozen several dozens of thousands of dollars, to satisfy the purse and the whims of each bride.

Bridal shops are huge, often with a runway where the future bride can walk in front of her mother and her best friends. She can try on all the dresses she wants, all the veils, gloves, tiaras and accessories she desires. It almost looks like a little girl game. Once she decides she has found the dress, her eyes will tell, it will be an explosion of laughter and tears among her friends who will lift the usually pink and gold paddles supplied by the store and, among wows and giggles, they will scream She said yes to the dress! Just like in the famous tv series. Her dress will be delivered a year later together with the dedicated special box that will keep the dress white forever.

After the dress, it is time to select bridesmaids and groomsmen. Through this possibly hard-to-do selection, the couple will decide which friends will stand next to them at the altar or before the officiant, usually only men next to the groom and only women next to the bride. These special friends will organize the bachelor and bachelorette parties and will help and support the future bride and groom in all planning details. The bridesmaids will all wear the same dress and the grooms the same tuxedo, even though the wedding takes place in the morning or early afternoon, with a bow tie matching the ladies’ dress color. The bridesmaids will pay for their dress while, more practically, men will rent their tuxedos.

The bachelor and bachelorette parties are no ordinary events but a 3-4 day trip with lots of activities that include a hangover. The top destinations of the moment are Las Vegas, Nashville, and Miami and never like in this case is valid the saying that what happens in the trip, stays in the trip!

Following, approximately one month before the wedding, the mother of the bride, helped by girlfriends and women relatives, organizes the bridal shower, an event limited to women which usually includes lunch and playful activities. One of these is the new trend of having some handsome manservants, instead of strippers, who, wearing the uniform selected by the host, will wait on the bride and her friend’s hand and foot making them feel like princesses (prices start at $300 per servant for two hours).

After the bridal shower, there is a pause until the day before the wedding when the rehearsal takes place. It is like the theatre dress rehearsal of a show. In addition to the bride and groom, there will be the parents, the wedding party, the officiant and the flower girl and ring boy. It takes place at the wedding venue and it is driven with a stopwatch precision by the planner or wedding director who manages times and ways. Once rehearsal is finished, all participants party together at dinner.

So we get to the long-awaited day that, for a wedding taking place at 5 pm, will start at around 9 am. The bride and the mother of the bride will arrive at the wedding venue and where a suite has been reserved for the group of the women (mother, mother in law, bridesmaids) and one for the men (groom, groomsmen, father of the bride and of the groom). The first is provided with mirrors, tables and chairs for make-up and hairstyling, comfortable couches, and a dining table with all sorts of drinks, tea, coffee, champagne, fruits, desserts, sandwiches, and salads. Once that all the ladies of the wedding party have arrived, they will wear a robe which the bride has gotten for them and they take turns for make-up and hairstyling. These are among the most pleasant hours of the day, made of complicity, laughter, and joy. In the meantime, in the men’s suite, they follow the sports of the day on a big screen while they get ready for the event.

At this point, bride and groom whether they want “first look” photos, bride and groom are all dressed up and ready in a few moments of alone time before the ceremony. If they don’t, the wedding will take place according to tradition, be it in a religious place or a beach or a forest, according to the precise order of entrance and exit.

Once the ceremony is over, the reception will start with the Grand Entrance of the wedding party in the hall at the sound of their favorite music. And according to the style of each of them, so much so that at times it seems to be at a Broadway show. The last to enter are the bride and the groom who stop on the dance floor for the first dance, often choreographed and performed during many dance lessons.

Once everybody sits down at the table, during dinner, parents and friends will toast to the bride and groom. These are not simple toasts but real speeches, with anecdotes and praises, that try to cause laughter alternated with tears of emotions. After the toasts, the minutes of pure emotion of the dance of the bride with her father and, right after, the groom with his mother. At the center of the dance floor, father and daughter will twirl in a waltz or will go wild in a line dancing in a pure far west style never leaving anything to chance and instead of following choreographies learned over the course of the time before the wedding.

Once the checklist is finished according to a precise schedule, there comes the time of tossing the bouquet and the garter, right after cutting the multi-tier cake. It is a new tradition keeping the top tier intact, freezing it and eating it on the first year anniversary.

We are in the US and at midnight sharp, like in Cinderella, according to local regulations, music stops and kisses and hugs begin to say goodbye to friends and family often coming from far away, some from the Wisconsin cornfields, some from Texas and some from the California golden beaches. The bride and groom say goodbye without the Italian wedding favors distribution ritual and, while the Dj plays the last song, the newlyweds make their grand exit to start their honeymoon. To remember this day, instead of just photos, some will decide for a painting of a scene of the wedding by an artist who live paints.