An interview with Barbara J. Zitwer 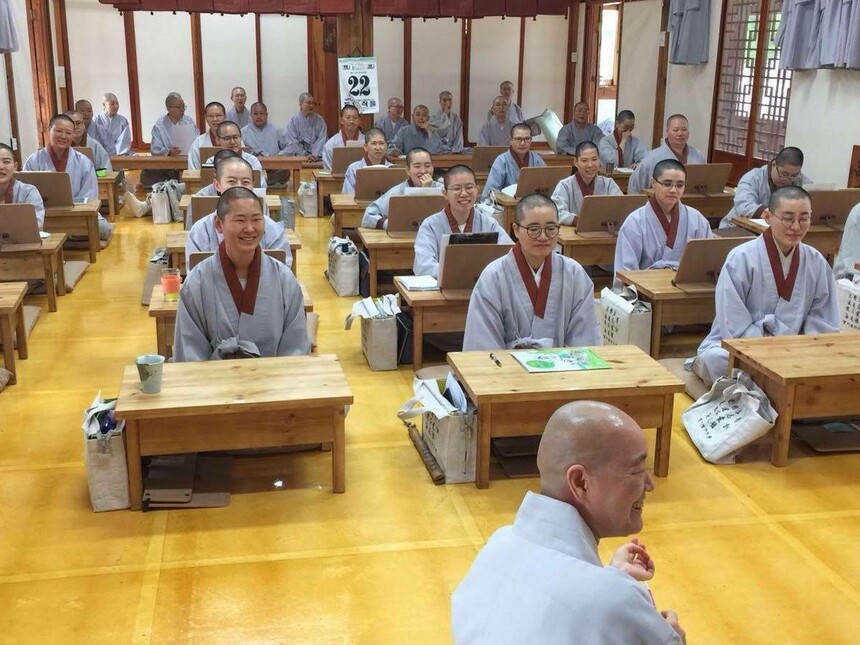 An interview with Barbara J. Zitwer

Much has been said, recently, about South Korea. A country that is arousing increasing collective enthusiasm. A new volume (The Korean Book of Happiness) by international producer, playwright and literary agent Barbara J. Zitwer unveils its secrets and allows us to discover more in the following interview.

Zitwer investigates the reasons for this fascination, analysing all the different aspects of a sui generis civilisation, riding the hallyu, i.e. the Korean wave that has swept over her as a visitor and as a promoter of local writers; inviting us not only to visit it but to understand its culture, in order to create our own personal, in-depth reflection.

The Hallyu (Korean wave) swept you over as soon as you arrived in Korea. What immediately struck you upon arriving in South Korea and prompted you to investigate the country, further?

Actually, I discovered Korean literature almost fifteen years ago and since then I have been working with Korea and have visiting several times. The first time I visited, I was the only American and no one was talking about Korea, visiting and it is was pre-Hallyu wave – before BTS and K dramas and Parasite and Squid Games broke globally. At the beginning, I discovered Korean through its literature and I visited to meet the Korean authors I represented as a literary agent. My first visit was life changing! I visited a Buddhist temple overnight and went to the DMZ. I have been a world traveller always and love to discover new places. So, when I first visited Korea, I organized to visit places that interested me and I thought would be very important to understanding Korea… After staying at a temple overnight and meeting a young monk and listening to his profound thoughts, and going to the DMZ; the site of the army base between North and South Korea which was scary and sad and made me think so much about what the country had suffered, I began to feel Korea in my heart and mind. I revelled in the new and healthy, delicious foods like ginseng chicken soup which I ate at a country restaurant in the middle of a field of lotus flowers. We sat on the floor without shoes and I was so happy and comfortable. The people I met were so welcoming and every meeting and meal I enjoyed was more and more special, fun, and fascinating… I wanted to discover what makes Korea “tick” – what makes Koreans so special and different… so natural, intelligent, hardworking, sincere, unpretentious and unique. I was only able to stay for two weeks on my first visit and I left wanting to return soon.

And then I did return and went to more exotic and amazing places throughout the country, always being astounded that I seemed like the only foreigner there. I watched over the years as Korean culture because discovered by the world and now I think many people want to visit Korea. For me, at first, it was the unknown, mysterious and beautiful that drove me to discover more and more. But I can say now, that as much as I have learned about Korea, the more mysterious it seems. I can never figure it out… it’s a mystery within a mystery within a mystery. And that makes Korea ever fascinating. I can never get enough!

What aspects of the culture did you choose for your book as best exemplifying South Korea?

I tried to give an overview of all aspects of culture including home, food, shopping, Greetings and communication, family, etc. because there were no books about Korea that offered the kind of information for global readers that I was looking for. So, I wrote the book myself – a book that would give an overview and understanding of the country, culture, history and customs for readers. I wanted to take readers to the Korea I love without them having to leave their sofas! I wanted to make readers understand the core Korean sensibilities and ways of being so that they could more fully appreciate the films., K Drama, music and literature. If we know the where, why, how, etc. about a people and country, we can more fully appreciate their culture. I also wanted to show the common threads that bind us – our global brothers and sisters together. By learning about Koreans, we become closer to them and I wanted ever reader to make a friend of Korea by reading my book – it will make for a more harmonious world I believe.

How did you go about your research and what discoveries did you come across, while writing?

I researched the book as I went out my business as a literary agent and visited Korea several times. Over the years, I didn’t think about writing a book. I was just having the most unforgettable experiences like visiting an old female Buddhist monastery/university in the mountains many hours from Seoul. I went there with my client and friend Kyung-Sook Shin. We were invited to tour the grounds and I was overcome with a “natural high” – something I had never experienced before. I couldn’t stop laughing and dipped my bare feet in the cold waters of the small stream and spent the day meeting young monk students…. When I was listening to Kyung-sook lecture in a huge room with many students, all with bald heads wearing grey robes and in rapt attention, I felt that it was the highlight of my work as a literary agent. The most unique author-reader event I had every attended and I knew then that it was the most unique event I would ever attend in my life. It was astounding! The power and love of books had brought me way up high in the mountains to a remote monastery in Korea! Never in my life, could I imagine this. So, my imagination expanded in Korea – it grew – I realized I had new dreams.

The natural way of life – as simple as women always wearing flat shoes for instance was a revelation! No one wears high heels in Korea. The fashion is for flats… that in itself is life changing and all women know what I am talking about! I discovered the power of simplicity and that was the best way to live – going to Korea, confirmed some of my habits that seemed out of sync with my western, NYC life. I have always love to sit on the floor but got scolded as a child. In Korea, sitting on the floor is proper etiquette and good for your back and your body. Taking off your shoes inside is a must in Korea. Not so, in the west although that is starting to change. Freeing your feet to be healthy and comfortable is key to wellness I think. There are so many discoveries I made!

What do you think underlies the West’s fascination with South Korea today, and what are the fundamental differences between the two cultures?

I think that the West is discovering now what I did twelve years ago. Korea was very private and the Koreans did not promote themselves or their culture much until BTS and streaming and covid. While everyone was forced to sit at home, and streaming services started showing Korean dramas and films, BTS’ music exploded all over the globe, and Korean books were translated more and more, the West got exploded to Korea in all its brilliance and we want more and more and more. For the West, it was discovering a completely new culture and people and that is quite unique these days. If not for the internet and streaming, this would not be possible.

When the West watched Parasite, it won Best Picture at the Academy Awards, a huge first and unheard of before that a foreign film with sub-titles could and did win an Academy Award. The freshness, newness and brilliant of the film was undeniable.

We in the west are still discovering Korea. We have only heard music or watched TV shows or read a book, but there is so much more to the country and people. There is a rich, rich, rich fertile world to uncover… And there is a lot of beauty that attracts us. We in the west are always looking for something new to excite us. We are inundated with social media and bombarded with media all the time. But there was really nothing much new until Hallyu and the Korean wave broke over our shores. So, there is so much to discover that excites us in the West. Korean content is different than ours.

It is very difficult to say what are the fundamental differences between us and Koreas because I always look for the similarities that bring us together… we are all humans after all. But there are many differences in that Koreans very much adhere to the historical and cultural ways that have been around for thousands of years. I think probably the biggest difference between Koreans and the West is that Koreans have a profound sense of love of their country and each other as Koreans and they put their country above their personal needs. They are bonded by their duty and obligations for their country. And then in turn, they are very family oriented, still today. They are a people who revere the sense of togetherness and they see the value in bonding together to succeed and to live. In the West, we are very independence-oriented and everything is me. In Korea, everything is “we”.

May I ask you about the current projects you are working on?

There are two projects I am working on now…. I am deciding on what should be the subject of my next book of happiness! I so much enjoyed writing the Korean Book of Happiness and weaving personal stories to illuminate facts about a country and people … this style of a memoir. Travelogoue, book filled with recipes and anecdotes from my Korean friends was a challenge and joy to write. This book is my first non-fiction book. I have previously written novels. I found writing a non-fiction book had its own challenges but it was easier to write… I knew my subject very well through years of personal experience. So, I would like to try and do another book of Happiness for a different place. I also think that I am basically a simple and happy person and I am very optimistic. I always see everywhere I go as fabulous! I see the wonder in everything first… so, I think my approach of optimism is important to put out there because the world is going through such a difficult, awful time now… Most people are very negative or juts feel like they are just getting by. But even though life is very difficult and painful at this time, I kind of have the natural ability to always see the sun shining and to view things through a pretty lens. I search for that and I always find that. The beauty in a place, a people, a food, a puppy! I think we need to read more and see more and feel more of all kinds of books, movies, TV, plays, etc. that nourish positivity.

And then, I’m always thinking in the back of my head about a new novel and what they will be! So, both projects are in the germinating stage right now…

The author: Barbara J. Zitwer is an international literary agent. She graduated from Columbia Film School and produced films before working in publishing. She lives with her husband and their two dogs in New York, where BJZ Agency, her literary agency of more than twenty years, is also based. She discovers established authors in their home countries and helps them to succeed globally. It all started in Korea.

adidas and Prada Unveil Their Slick and Sporty Re-Nylon Line