‘Arachnophobia’ Telling the time with two hands and eight legs 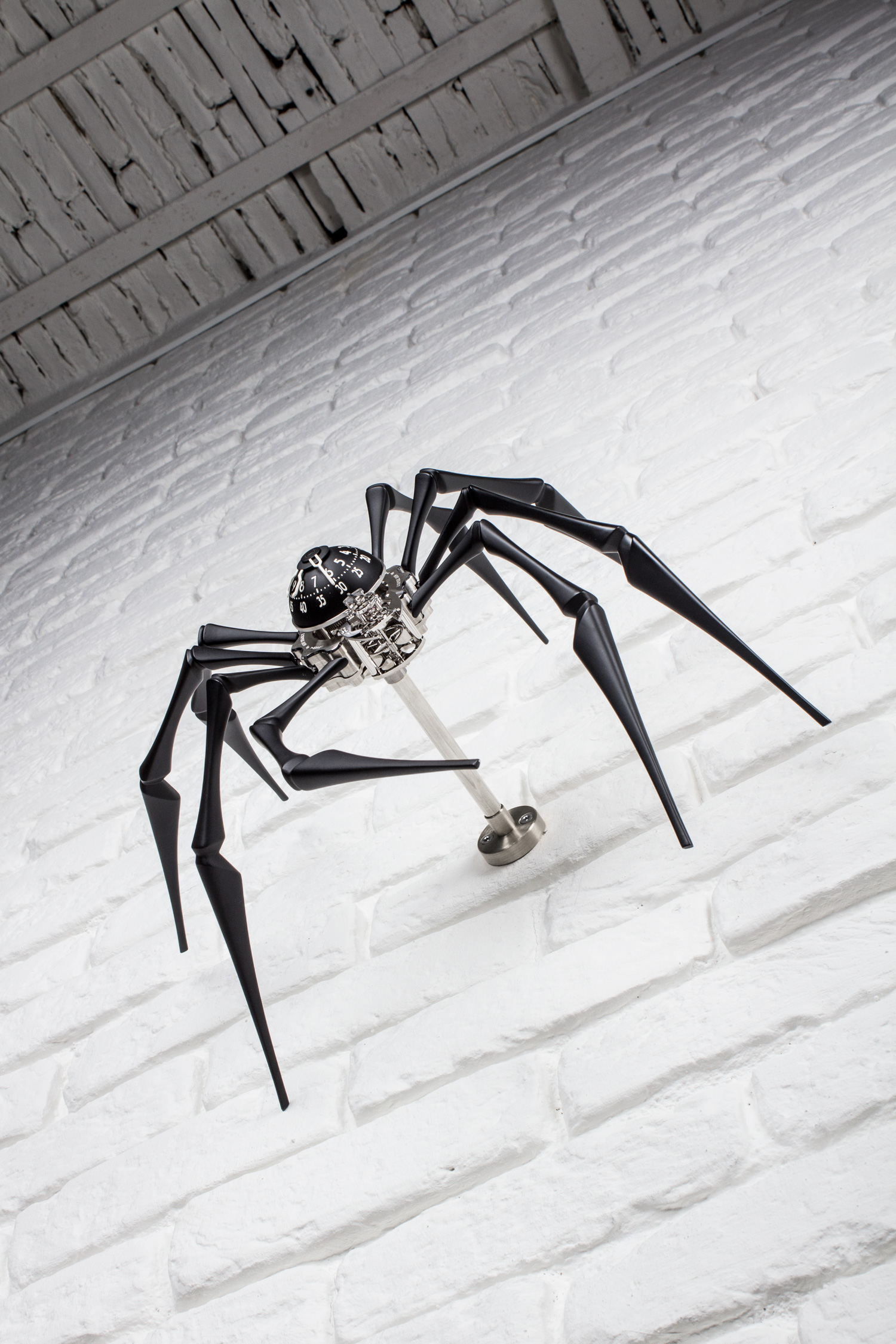 ‘Arachnophobia’ Telling the time with two hands and eight legs

Founded in 2005, MB&F celebrates its tenth anniversary in 2015 with the motto “A creative adult is a child who survived”. 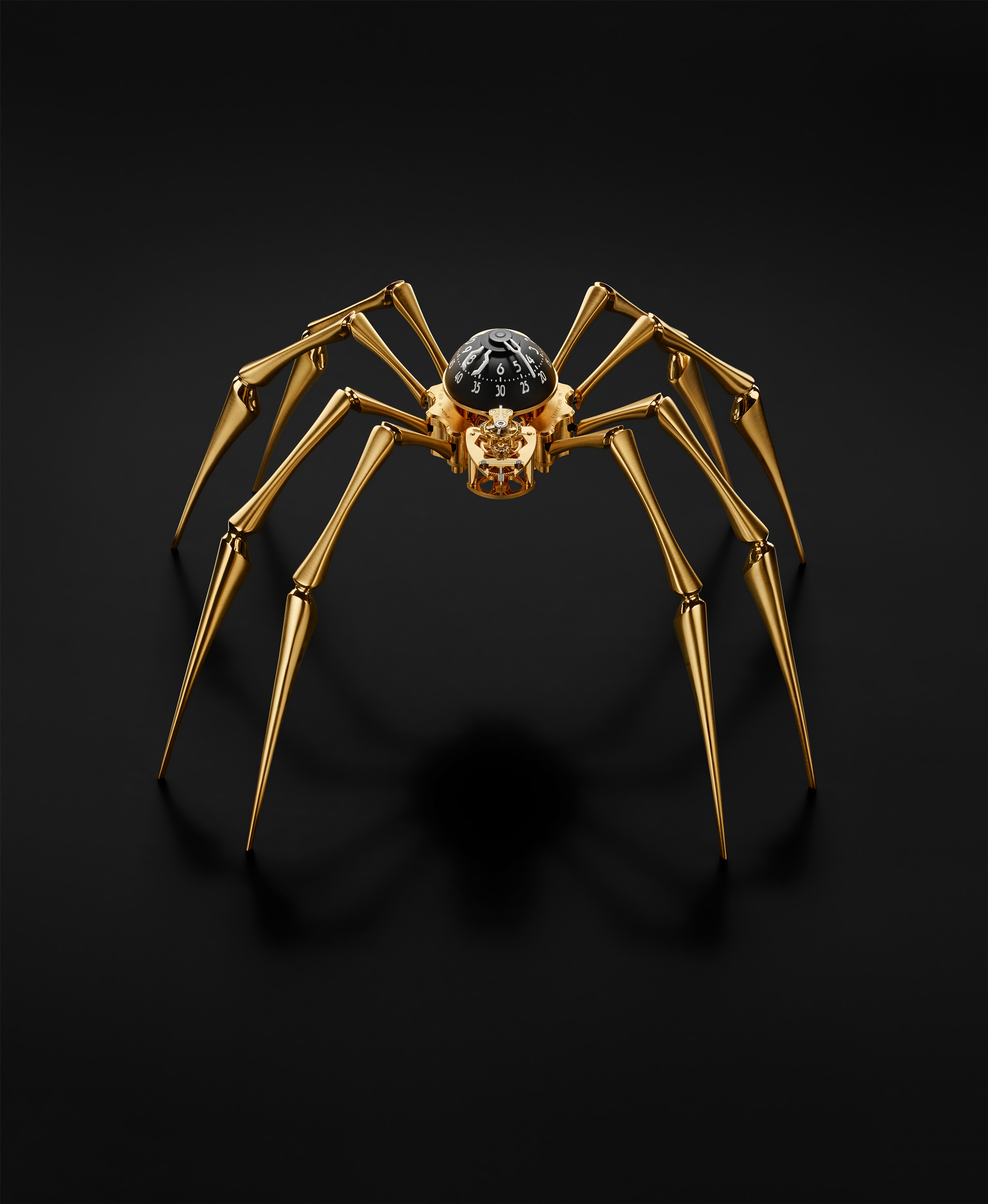 In its first decade, the Geneva-based creative lab has presented some very extreme machines, and the visually powerful Arachnophobia is as extreme as they come. Despite Arachnophobia’s intense appearance, the eye-catching three-dimensional sculpture is also an impeccably finished table (and wall) clock.

Conceived and developed by MB&F, and engineered and crafted by L’Epée 1839 – Switzerland’s only specialised high-end clock manufacture – Arachnophobia is the result of MB&F founder Maximilian Büsser’s overactive imagination blending with his appreciation of art.

Arachnophobia was inspired by a giant spider sculpture called Maman that Büsser had seen in both Geneva and Doha. Maman (mother in French), was created by Louise Bourgeois (1911 – 2010) in bronze, stainless steel, and marble. Measuring 9.27 x 8.91 x 10.24 metres (more than 30 x 33 feet), the monumental sculpture has been installed in a variety of locations around the world.

Büsser developed the highly unusual concept with L’Epée, selecting a high-end L’Epée clock movement and re-imagining it as the mechanical head and torso of a spider. The body is outfitted with a black dome with white numerals depicting the hours and minutes. The araneae’s self-sufficiency is to be admired, for the finely-finished, highly-visible movement boasts a power reserve of eight days.

At either end of Arachnophobia’s time-displaying abdomen, important mechanical processes take place: the head houses the regulator with its oscillating balance wheel (and a set of jaws in case it gets peckish at night), while the other end contains the mainspring barrel, which powers the movement. Attached to the abdomen are eight, visually enticing legs articulated where they join the body by ball-and-socket joints. The legs can be rotated so that Arachnophobia can stand tall on a desk or splayed flat for wall mounting. A third position provides an optical treat for fans of large arachnids: the front legs can be moved forward while the six others maintain the standing position, an interesting and alarming posture that says, look out!

Arachnophobia is available in two colours, black or yellow gold. While individual tastes will vary, the black version is more realistic-looking and may be even intimidating to some; the gilded model has a more sculptured artistic appearance.

While Arachnophobia is not nearly as large as the sculpture that inspired it, at 405 mm in diameter with the legs fully extended, or hanging on a wall, it is certainly large enough to make a real impression. Whether that impression is positive or negative depends on how much you enjoy creepy-crawlies.

Arachnophobia is available in black or 18k yellow gold-plated editions. 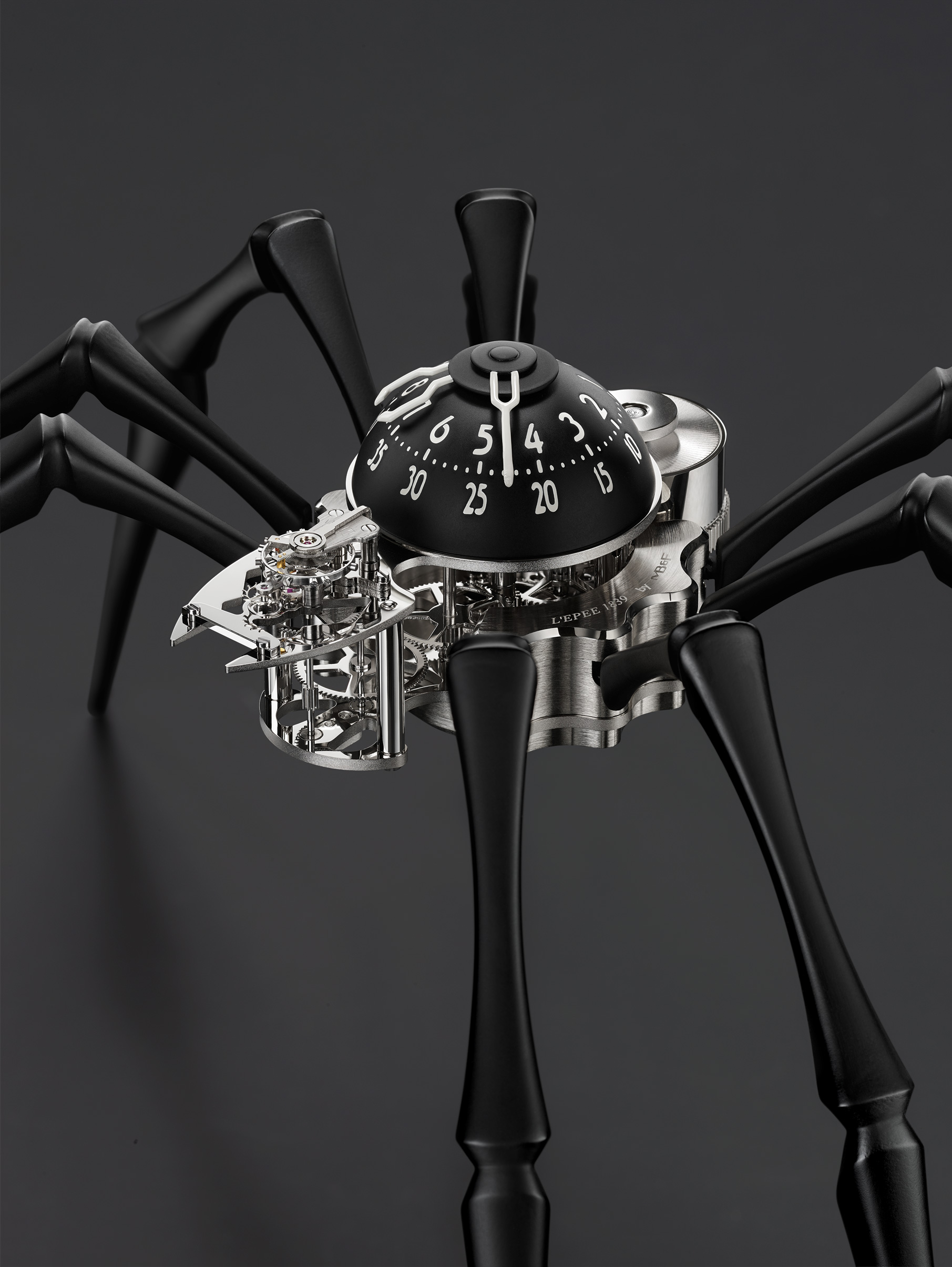 Arachnophobia comprises no fewer than 218 components, each one (except the jewels) machined and finished at L’Epée’s Swiss atelier.Manufacturing realistic legs to faithfully replicate MB&F’s unusual design was no easy task. L’Epée had to find a solution for the legs that ensured that they would be both realistic-looking and articulated. The legs also had to conform to the standards of high watchmaking in that they could be nicely finished by hand. L’Epée came up with the novel solution of injection moulding metal to obtain the precise geometry needed. Injection moulding is a process of manufacturing components by injecting material (in this case metal) into a mould. The material is first subjected to high heat, then forced into the mould cavity. It then cools to the desired shape before being removed from the mould. While this is a very common process for shaping plastics, it is less common for shaping metals.

Arachnophobia is available in two colours, yellow gold and black, which required two different metals for the legs. The gold-coloured edition features gilded brass legs, while the black version’s legs are made of injection-moulded aluminium, which is hand-finished and lacquered black.

“When the legs come out of the injection mould, they are really rough and need a lot of attention to be as nicely finished as they are in the end,” says L’Epée CEO Arnaud Nicolas. “All of the finishing is accomplished by the hands of master finishers, who grind, satin-finish, polish, and then plate or lacquer the legs depending on the version.”

Finishing techniques used on the clock’s “body” and legs include anglage, mirror polishing, satin finishing, circular satin finishing, sand-blasting, and polishing. “The most important thing was to play with light on each one of the spider’s parts,” Arnaud Nicolas continues. “Some of the parts were sandblasted to continue the light play.”

The eight legs are connected to the clock “body” by ball-and-socket joints. By rotating them the legs can be made to go flat; turning them around again allows them to stand up high like the Bourgeois sculpture that inspired them. The front legs can also be pushed forward while the six others maintain the standing position. “This makes the spider look like it will bite something,” Arnaud Nicolas laughs.

To really make a statement, L’Epée has also developed a system enabling Arachnophobia to be hung on a wall. An innovative catch underneath the movement hooks on to a stainless steel wall bracket.

“Making this clock was an adventure; it is the first time we went so far on a design,” Arnaud Nicolas explains. “In fact, the clock was made in two steps. The first one was the spider itself, and the second took place in the middle of a meeting when I was presenting it and had the spider in my hand near a wall. I was explaining how incredible this new clock was when the idea of hanging it on the wall popped up in my mind.”

“Working with the energetic MB&F team is always a pleasure,” Arnaud Nicolas continues. “Once again we went to a place where no one has gone before, and this is what I like about the MB&F team. Nothing is impossible; they have great ideas and incredible talents.” 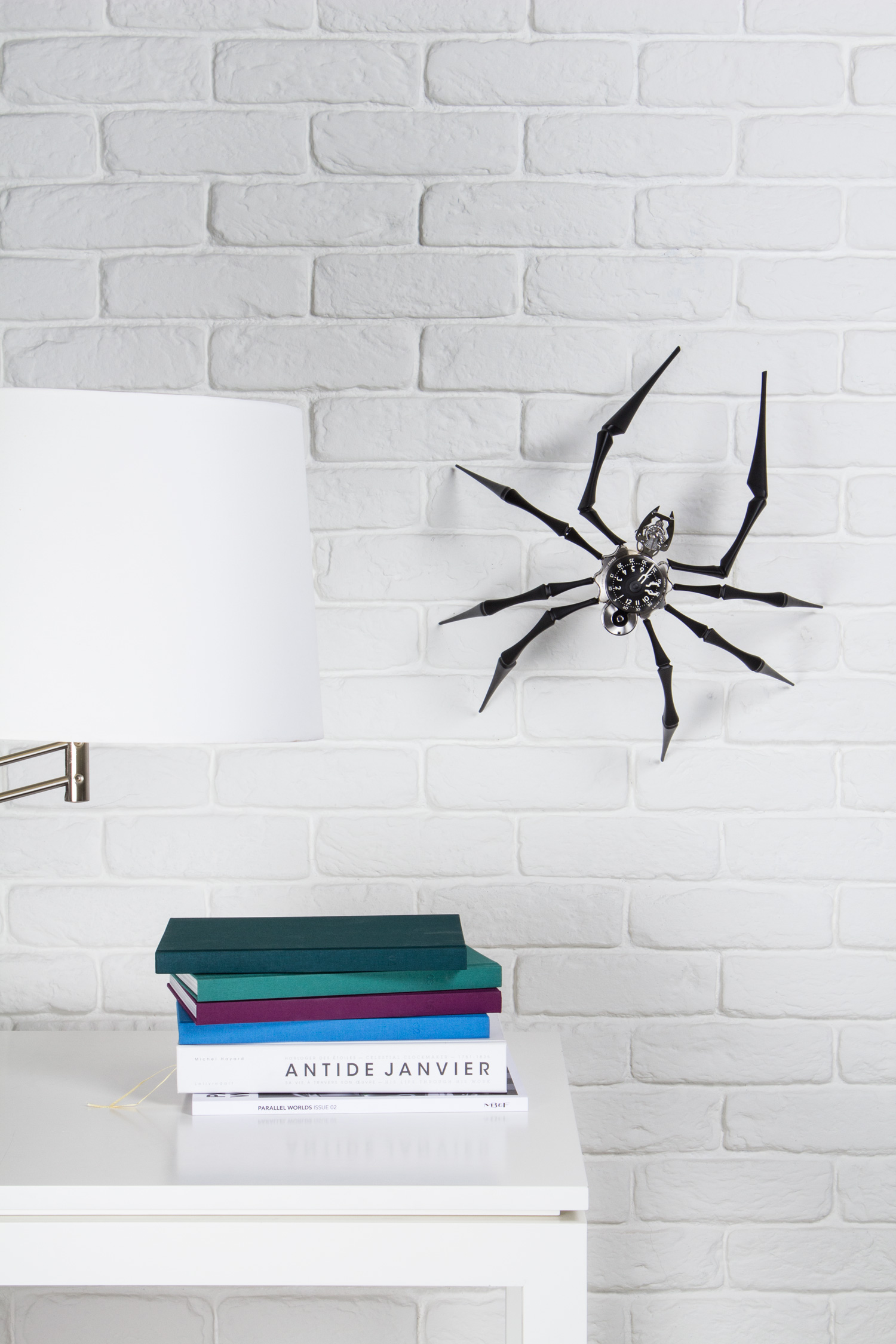 In creating Arachnophobia’s highly visible movement, L’Epée had to transform its eight-day movement to look more like a spider body. The palladium-plated main plates were redesigned as was the layout of the gear train to fit the design. The escapement was rotated 90° to better represent the head.

The movement’s regulating organ features an Incabloc shock protection system, which minimises the risk of damage when the clock is being transported. This type of shock protection is generally only seen in wristwatches. The index mechanism for fine-tuning the timing, along with the other components of this all-important high-precision subassembly, are clearly visible on the head.

The movement features superlative fine finishing of the type generally found on the finest wristwatches, including Côtes de Genève, anglage, polishing, sand-blasting, and circular and vertical satin finishing. However, finely finishing a clock movement is far more challenging than finishing a wristwatch because of the greater surface areas of the larger components. L’Epée CEO Arnaud Nicolas explains: “It’s not simply a case of double the size of the components, double the time it takes to finish them. The complexity increases exponentially. For polishing, for example, you need to apply the same pressure as when finishing a watch movement but on a bigger surface – and any variation in that pressure is visible.”

The underside of the spider is the key (quite literally) to winding and setting Arachnophobia. The owner must interact with the clock in an intimate manner to wind and set the time of this precision instrument, thereby building a close relationship with it.

Arachnophobia is available in black and 18k yellow gold-plated editions.

Winding: key winding and setting on underside of clock 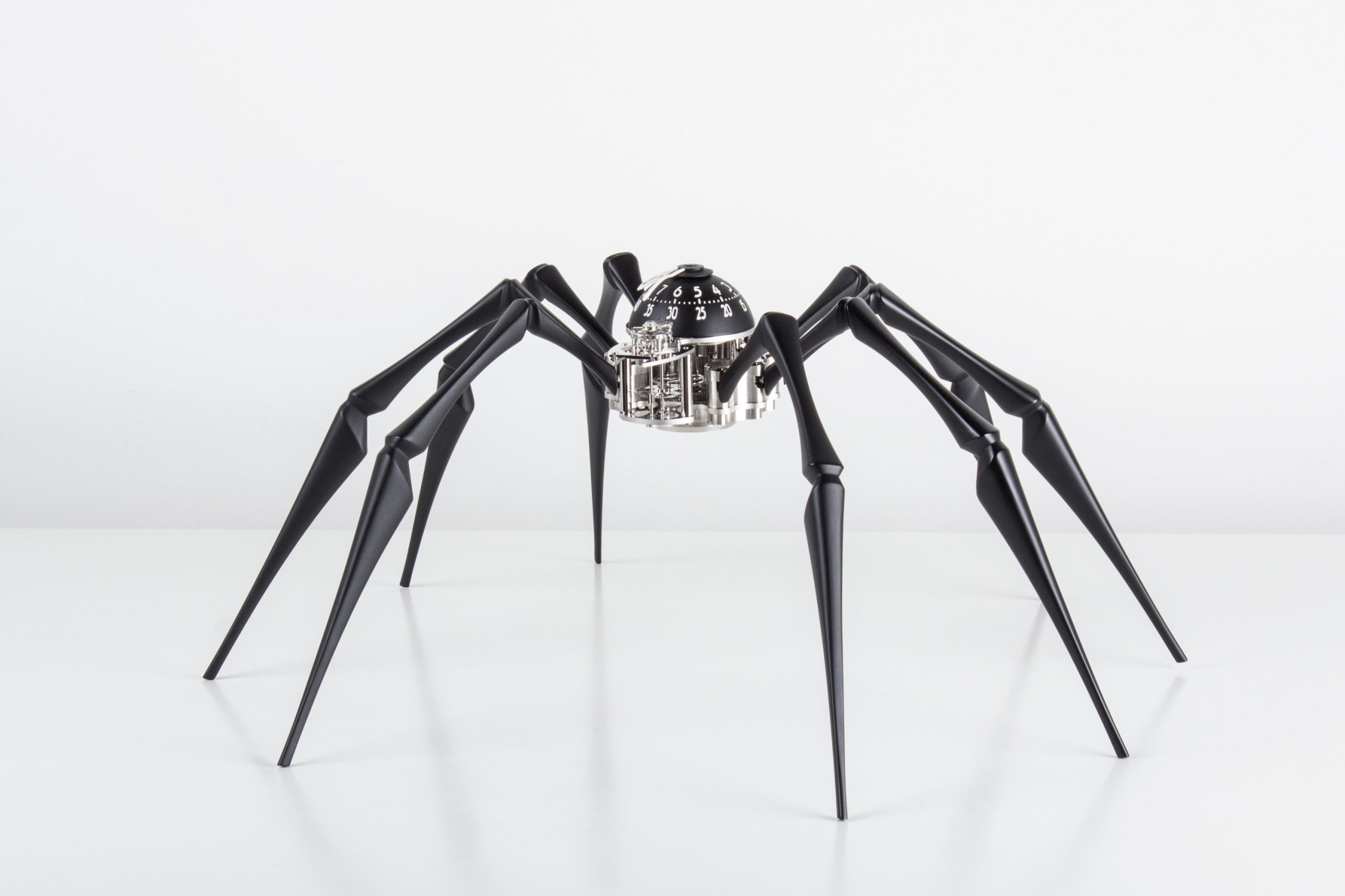 In 2015, MB&F celebrates its 10th anniversary and what a decade it has been for the world’s first ever horological concept laboratory: 10 years of hyper-creativity; 10 remarkable calibres forming the base of the critically acclaimed Horological Machines and Legacy Machines for which MB&F has become renowned.

In 2011, MB&F launched their round-cased Legacy Machine collection. These more classical pieces – classical for MB&F, that is – pay tribute to 19th century watchmaking excellence by reinterpreting complications from the great horological innovators of yesteryear to create contemporary objets d’art. LM1 and LM2 were followed by LM101, the first MB&F Machine to feature a movement developed entirely in-house.

Since then, MB&F alternate between launching contemporary, resolutely unconventional Horological Machines and historically-inspired Legacy Machines.And there have been distinguished accolades to remember along the journey so far. To name a few, at the Grand Prix d’Horlogerie de Genève in 2012, MB&F were awarded the Public Prize (voted for by horology fans) and the Best Men’s Watch Prize (voted for by the professional jury) for Legacy Machine No.1. At the 2010 Grand Prix, MB&F won Best Concept and Design Watch for the HM4 Thunderbolt. Last but not least, in 2015 MB&F received for the HM6 Space Pirate a “Red Dot: Best of the Best” award – the top prize at the international Red Dot Awards. 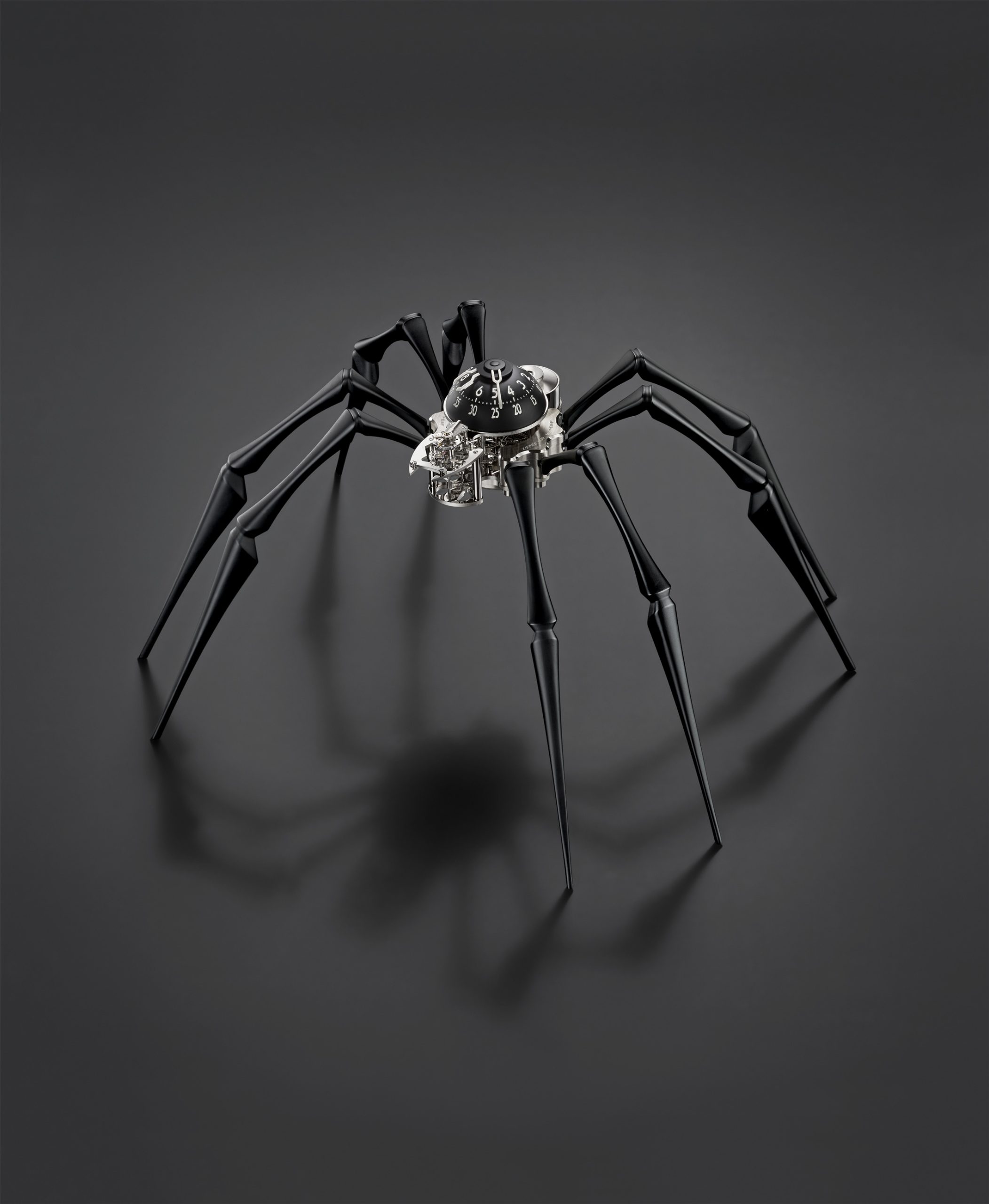 For over 175 years, L’Epée has been at the forefront of watch and clock making. Today, it is the only specialised manufacture in Switzerland dedicated to making high-end clocks. L’Epée was founded in 1839, initially to make music box and watch components, by Auguste L’Epée who set up the business near Besançon, France. The L’Epée hallmark was that all parts were made entirely by hand.

From 1850 onwards, the manufacture became a leading light in the production of ‘platform’ escapements, creating regulators especially for alarm clocks, table clocks and musical watches. By 1877, it was making 24,000 platform escapements annually. The manufacture became a well-known specialist owning a large number of patents on special escapements such as anti-knocking, auto-starting and constant-force escapements and the chief supplier of escapements to several celebrated watchmakers of the day. L’Epée has won a number of gold awards at International Exhibitions.

During the 20th century, L’Epée owed much of its reputation to its superlative carriage clocks and, for many, L’Epée was the clock of the influential and powerful; it was also the gift of choice by French government officials to elite guests. In 1976 when the Concorde supersonic aircraft entered commercial service, L’Epée wall clocks were chosen to furnish the cabins, providing passengers with visual feedback of the time. In 1994, L’Epée showed its thirst for a challenge when it built the world’s biggest clock with compensated pendulum, the Giant Regulator. At 2.2m high, it weighs 1.2 tons – the mechanical movement alone weighs 120kg – and required 2,800 man-hours of work.

See The Sky Above