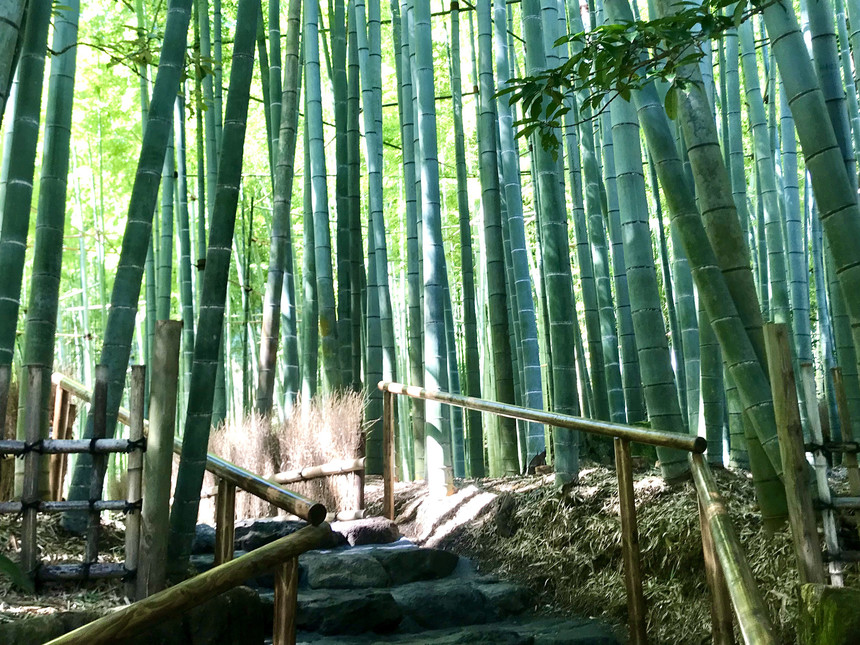 Just about 50 kilometers southwest of Tokyo, Kamakura remains to be a favorite easy getaway from the metropolis. Apart from its beaches off the Sagami bay in Enoshima island, the coastal town bears important historical significance. It established the base for the powerful Minamoto clan, which dominated Japan between 1192 to 1333. During the Kamakura period, the town’s surrounding mountains and sea served as strategic protective barriers against military rebels. Various sects of Zen Buddhism were also developed during this era; thus, required the establishment of many temples, which exist till today.

One of the enchanting temples in Kamakura is the Houkokuji Temple, which is also referred to as a bamboo forest temple. The splendid bamboo groves encircling the premises make this destination quite unique from the other temple gardens around the city.

Bamboo has always carried an auspicious relevance in Japanese culture. It symbolizes prosperity, purity, and innocence. In the past, Japanese people used to run towards bamboo trees during an earthquake. Its simplicity and strong-rooted features have given the material the expression “Take o watta youna hito” meaning a man like a fresh-split bamboo and signifies someone with an honest nature.

Houkokuji was established in 1334 to commemorate Ashikaga Ietoki, the grandfather of Ashikaga Takauji, who was the first Ashikaga Shogun. In the same year, Houkokuji Kaisan, the French Zen Master, built a hermitage on this location to be used for training.

The entrance to Houkokuji is soon swarmed by luscious trees and bushes, leading to a sloped approach. A delightful Japanese moss garden curves along the path. Then, the line of hovering bamboo trees begins its parade. A variety of bamboo known as Mōsō grows around this temple, with over 2,000 trees scattered around the temple grounds. The main enclosed bamboo thicket truly renders a stirring emotion, keeping one almost at a standstill.

There is a lingering sense of mystery wrapped around the bamboo trees in varied shades of green while one peeps through the slits between them—like an opening revealing another opening. Some people feel the towering presence exaggerates the smallness of humans and the human world where tangible matters become less significant. Others may feel the overpowering height of the trees and the glaring sunlight filtering through them that seem to protect and cradle people in a secured basin. Additionally, the closeness of the bamboos may also exude a sensation of intimacy, reassuring one is never alone. These mixed impressions may explain why bamboo trees emanate peace, calmness and revitalization of energy at the same time.

Next to the main bamboo grove is a wonderful teahouse where one can sip a bowl of soothing matcha tea accompanied by Japanese sweets. Savoring the green tea in your cupped hand while gazing at the throng of bamboos proves ultimately pacifying.

As one strolls leisurely around the garden and the pond, a vision of a tomb cave comes to light, which shelters the remains of the Ashikaga clan.

The main temple building rests next to an exquisite Japanese sand and stone garden with a picturesque pond, guarded by the thick mountain trees behind. Time seems to stop from this view and compels one to withdraw from the present passage of activities, in order to submit completely to the force of nature.