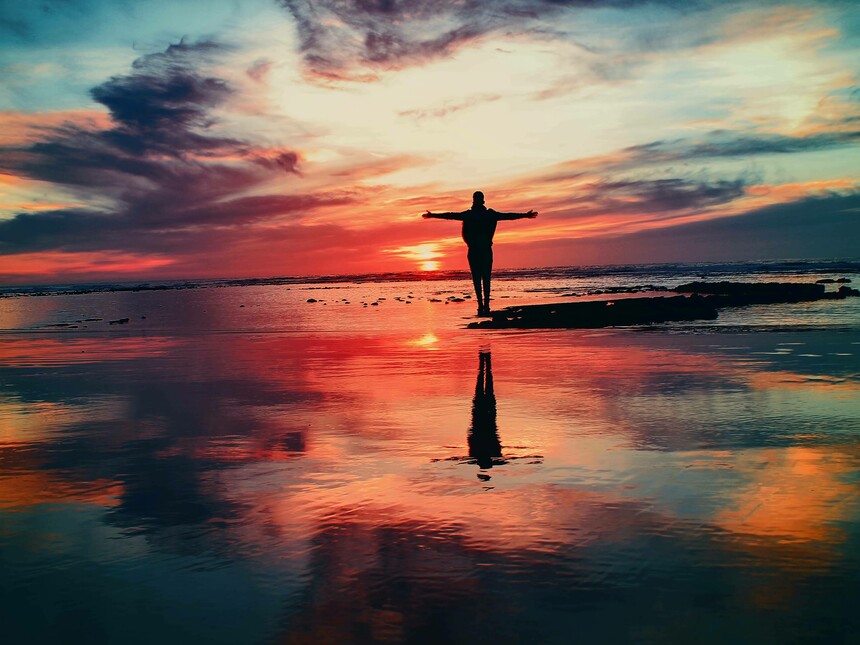 To penetrate the essence of all being and significance, and to release the fragrance of that inner attainment for the guidance of others, by expressing in the world of forms- truth, love, purity, and beauty – this is the sole game which has any intrinsic and absolute worth. All other happenings, incidents and attainments can, in themselves, have no lasting importance

I must have drunk some good wine last night, or maybe an angel crossed my room surreptitiously, but this morning upon waking, I had a feeling that somewhere bliss had escaped, wild, without discipline. It was a wonderful morning. It was raining intensely, so it was hard to say whether it was morning or afternoon, daybreak with its game of light was not the cause of the magic. Time seemed to have melted psychedelically, in purple hues. I brewed some coffee and decided to watch the TV news.

Wow, I became aware of the flat images flying on the square screen. Standard voices, disseminating information in a strange blend of wars, homicides, massacres, vanities, greed, and the latest weather. It was scary to watch, as two-dimensional faraway places exploded, while commentators raised their eyebrows, in sympathy, or judgmental admonition, and predicted scenarios, or explained causes.

At that moment, and for no reason at all, save for that wild escape of bliss perceived upon waking up, a thought crossed my mind, that there were so many fundamental happenings being missed by the breaking news, such as:

Smiles, I thought, as I smiled, which like leaves, would turn yellow and brown, and fall. To become again smiles, tears, and things. In endless cycles of life. In the incessant, inexplicable, unpredictable cycles of life.

Yes, every single moment is magical and full of miracles, albeit modestly disguised in clothes of ordinariness. And they are all missed by the breaking news. They miss the symphonies of faces, rounded up with eternity’s yearning, when they smile in colors, like rainbows, as our presences interact in space-time, sharing the luminescence of our soul journey. They miss every point where the universe is being created, every instant of sublime projection, and the love essence potential, painting itself in expression, as it glows and rolls every wave and drop.

Yes, there is an inebriating essence that lies hidden, in the shyness of explosions. Well beyond our imagination, way in there, impossibly near, hiding behind what has never been lost, beyond words and languages, the one song. The joy of pure being!

We have to stop our hectic consumption and assertion races, our constant attention to headlines and breaking news, so we can see the shining of everything. Only then we are able to focus our awareness on that song profound, that is being played all around, and that we miss as we focus on our immediate fears or escape thrusts, in short-lived excitement games, that veil the eternal magic that surrounds us.

It is in this ‘now’ moment where we can seize, the music forms that are being painted everywhere as we reveal each other to each other, as we go through this manifestation of life, and our galaxies merge, in sentiment and occasion. Universes expand in heartbeats, as we meet and greet and recognize, the vastness of every moment that passes by. And we recreate each other. From vantage points that flash in the sky, in multiple reflections and apparitions of Beauty, which are registered in laughter, compassion, words of guidance, ancient maps, new frontiers, silence, mantras, and meditation, hinting at the intimations of who we really are.

Women and men of all flavors and dispositions live extraordinary moments, witnessing in every second the recreation of worlds of beauty, imagination, and sense. The magic extraordinaire of each ordinary moment in this creation! Light forms come out of nowhere as we bond and sing this ancient song that now bursts from inside and blossoms, every time we stand still, in our inertial imaginary motion of day to day, and become inspired by the joy of just being there, in that Now that contains everything.

Space, time, and personality, plus belief systems and mindset, fragment the flow of beautiful diversity patterns and create the exquisite and terrible tensions that challenge the discovery, amongst the multiplicity, of the common denominator of Being, that connects us beyond the garden of many.
As mind time travels, memory compiles the moments, the frozen images of past interactions, of our collisions in free-falling, our convergences, our suspicions, our embraces, our graces, and the ill-intentions based on ignorance of depth, as we moved in the foamy surfaces of separation, frothing our integral ‘oceanity’ into a bubbly of waves.

Love, the binding energy, pulls us silently and secretly, like gravitation, despite all. And sometimes for an instant, we notice it, deep within, resonating in song, a symphony, a joy, amid our differentiation and diversity, our multiple assertions of points of view. This push-pull between the binding forces and the centripetal energies enables the romance of finding ourselves in the other.
In this life, as I momentarily thrive as me, I meet you, and we celebrate, disagree, embrace, dance, laugh, growl, kiss, despise, adore, praise, blame, forgive, judge, and other action and reaction verbs between two. What a great thing brother and sister other, that we have met one another, in whatever level of foam we did and do.

We should treasure each of these moments, like a collection of photos spread in the attic of our passing by. Let us sit down now, as time passes with its assortment of nights and days, as our bodies and mind gather the rounds of intelligence and experience, to continue the puffing and huffing, of dissolution and aggregation, of these magical dusts enlivened by the consciousness that we are.

As I sipped my morning coffee on this magic morning, glowing perhaps with the wake of the angel surreptitiously passing through the room last night, I thank you all for shared moments, lodged at different times in this guest house of me. I bow down to all of you, who have sculpted the boundaries of myself, who have opened windows of grace, who have danced or struggled with me briefly or intensely, in this push-pull rhythm that gradually shakes the foamy stuff. Until the ocean that fills each of our vessels, with the same water of life is revealed. That would be real breaking news.

Sell your cleverness and buy bewilderment

Inventing a national style in Baku