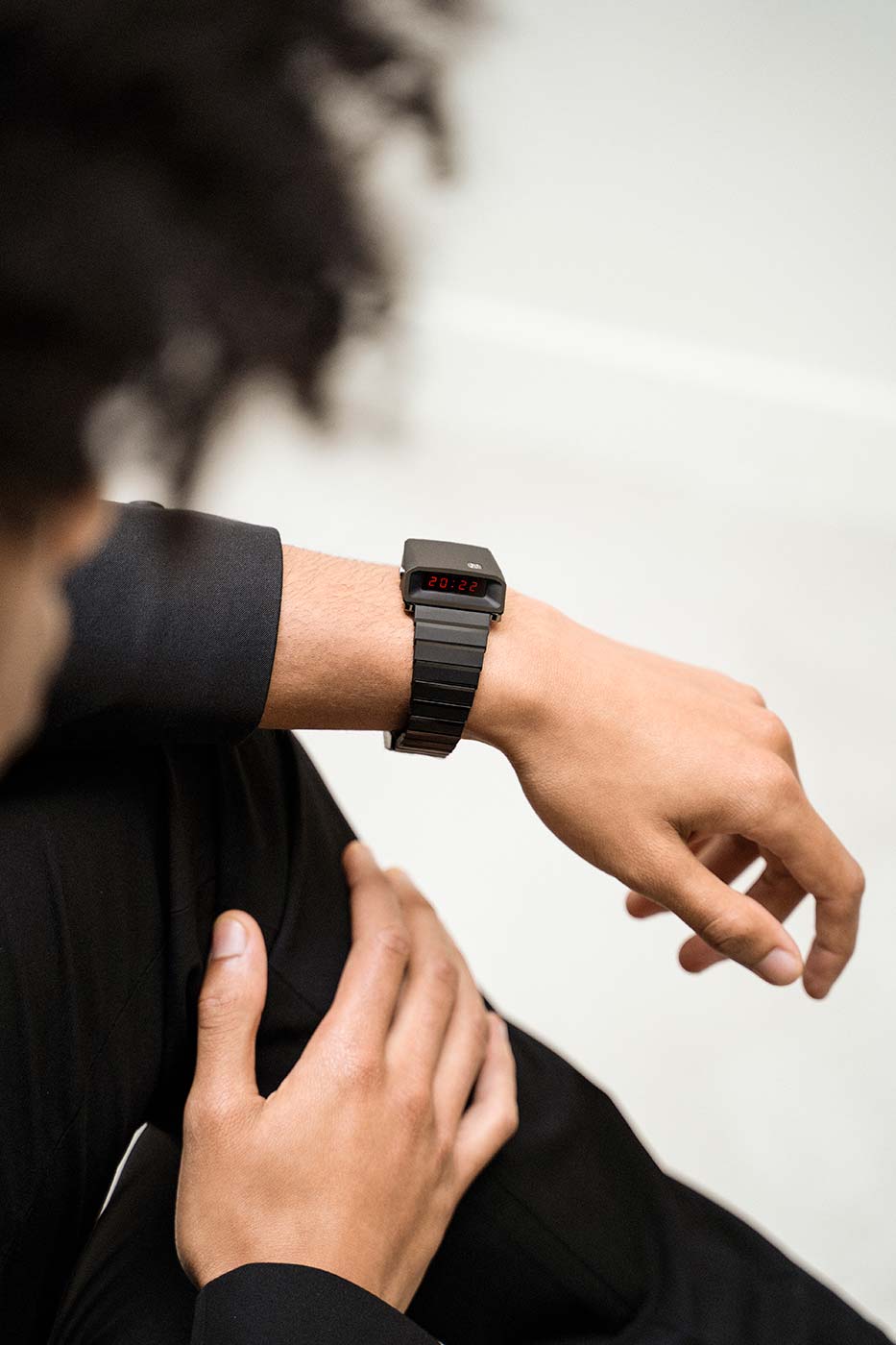 La Chaux-de-Fonds: The original Casquette was produced from 1976 to 1978. During that period, Girard-Perregaux made 8200 examples of this innovative quartz watch. Over the years, it has become much sought after by watch aficionados and style conscious wearers. Now, the Casquette is back! Named the Casquette 2.0, this new model upholds the design language of the original but is now encased in ceramic and Grade 5 titanium. Moreover, it features a new quartz movement with additional functionality. Lastly, with its ergonomic case, the model’s size and design make it suitable for all.

The birth of the Casquette 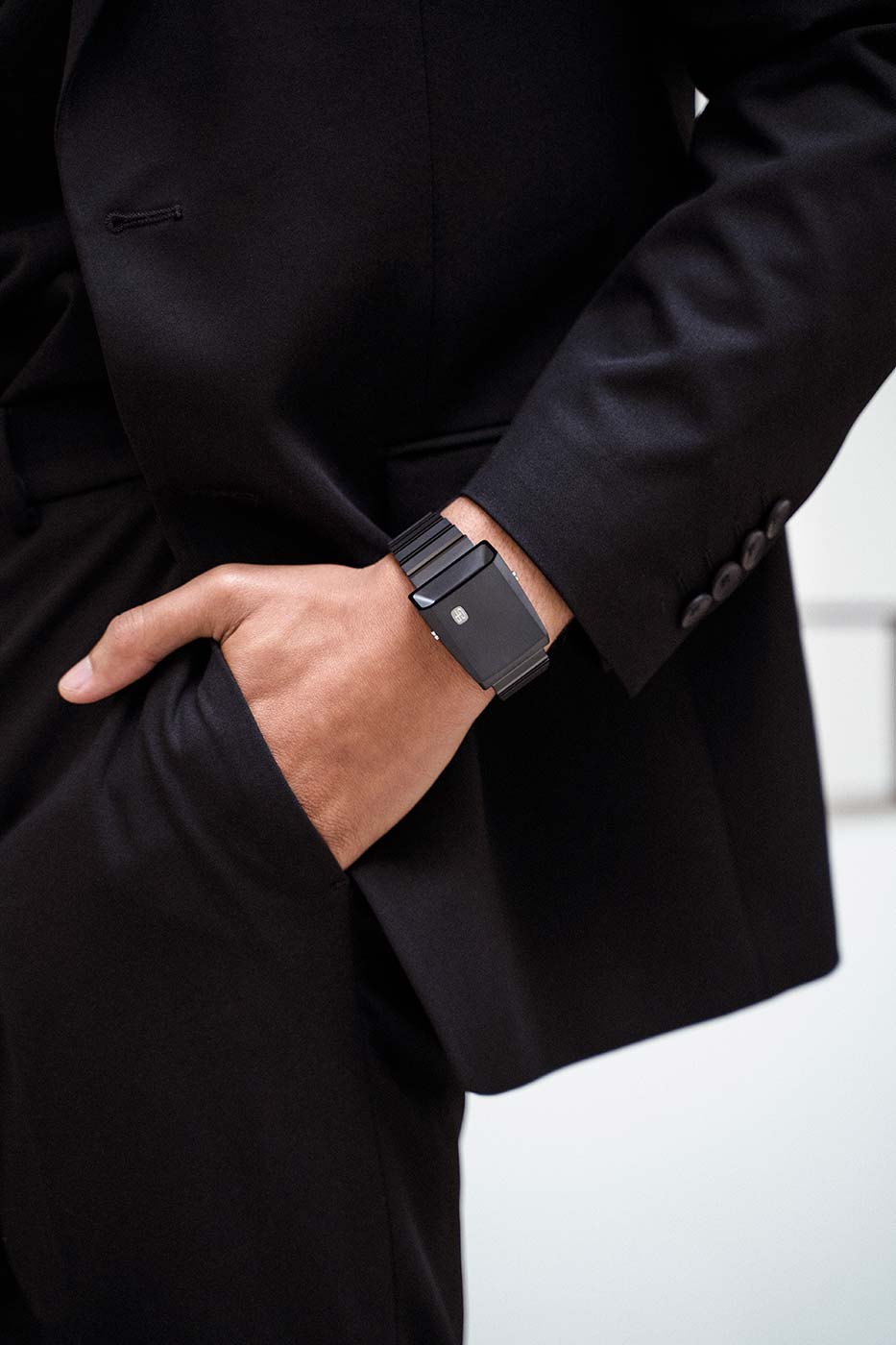 In 1976, Girard-Perregaux unveiled the Casquette, a cutting-edge timepiece endowed with a tubular LED display. Powered by a quartz movement, tapping into the horological zeitgeist of the 70s, the watch looked very different from the traditional two-handers of the time. Interestingly, Girard-Perregaux, the Manufacture founded in 1791, was at the vanguard of quartz timekeeping. Indeed, the frequency of 32,768 Hz was set by the Maison and subsequently adopted as the universal standard for quartz watches.

This ground-breaking watch was not officially called the ‘Casquette’. Instead, the watch was marketed using a reference number. However, watch collectors began to affectionately nickname the watch ‘Casquette’, a soubriquet which has remained part of horological parlance.

The original displayed the hours, minutes, seconds, day and date with its quartz movement delivering a high degree of precision. Moreover, while many rival firms merely swapped a conventional display for a circular panel featuring a series of LEDs, Girard-Perregaux looked at the Casquette’s design with a fresh set of eyes. The tubular LED display was not only functional, its appearance sidestepped convention, contributing to its avant-garde styling. Indeed, at the time, the watch was likened to a 70s muscle car with its LEDs resembling taillights.

Throughout its history, the Maison has repeatedly shown its design expertise. When designing a watch, the brand views each element not only in isolation, but also as part of a cohesive whole. Back in the 70s, the brand embraced the idea of equipping watches with integrated bracelets. Moreover, the company has always shown a predilection for different case shapes while paying due consideration to ergonomics, practicality, and readability.

The Casquette was produced from 1976-1978 and offered in three case variants, Makrolon® (polycarbonate), yellow gold plate and, lastly, steel. Over subsequent years, the Casquette has become much sought-after by watch collectors and fashionistas alike. Its ‘retro futuristic’ design language continues to proffer much appeal which has never waned. 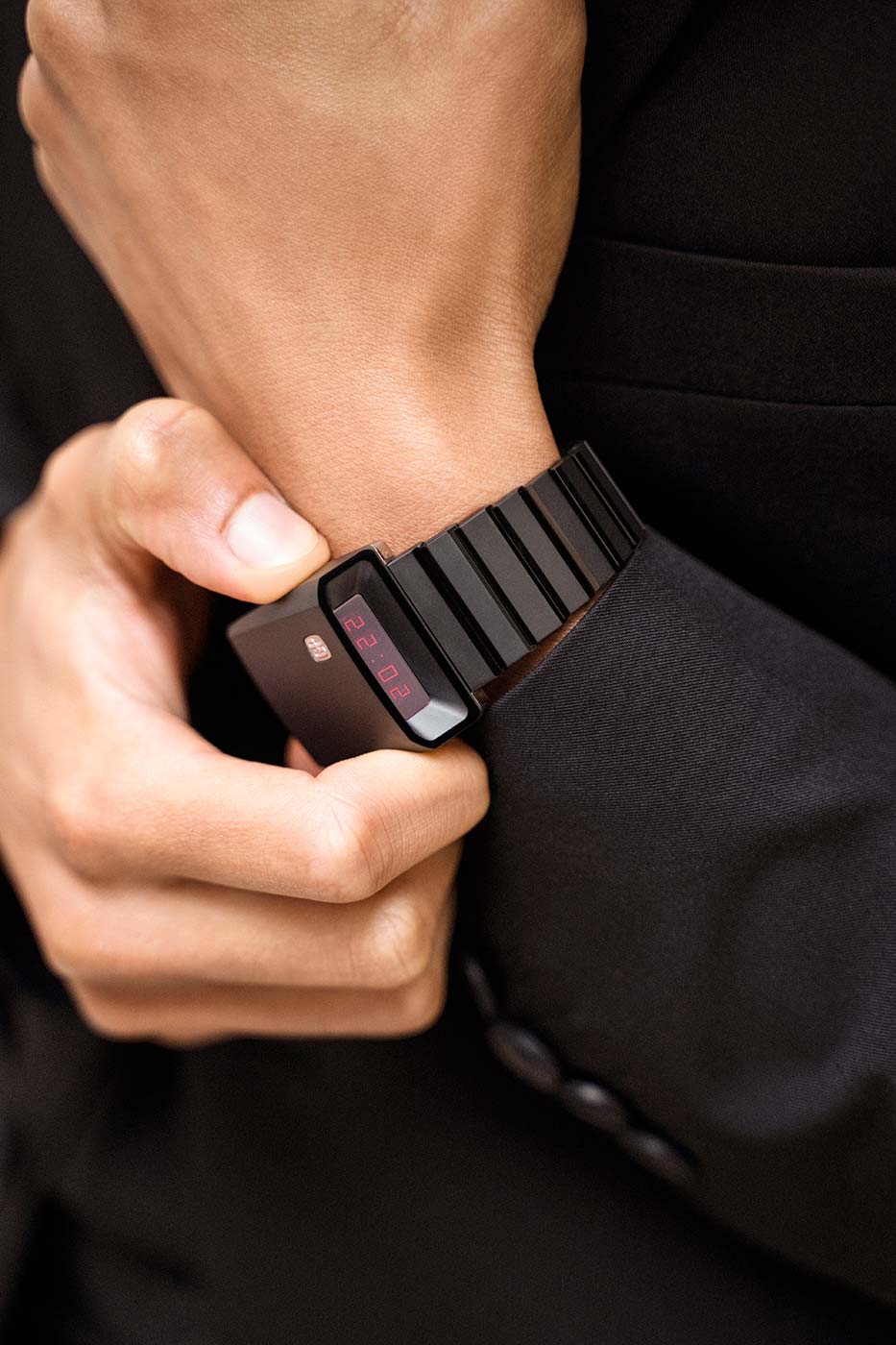 Now the Casquette is back! This time, officially adopting the original moniker, it has been named the Casquette 2.0. It is housed in a scratch-resistant ceramic case and features a Grade 5 titanium caseback. Both the titanium and ceramic are hypoallergenic and light. Indeed, it has an exceptionally low mass of 107g, helping to augment wearer comfort. In fact, the new Casquette is more comfortable than ever. Rounding off this lightweight ensemble are titanium pushers and a titanium badge which is positioned atop the watch head and emblazoned with a period GP logo.

In 2021, Girard-Perregaux, in collaboration with Bamford Watch Department, created a pièce unique in support of the charity auction, Only Watch. Based on the original Casquette of 1976, the watch was encased in forged carbon and titanium and endowed with titanium pushers. The watch sold for CHF 100,000, raising
much needed funds for research into Duchenne muscular dystrophy. At the time, some keen-eyed observers noticed that the Casquette Only Watch Edition featured a new movement, the Calibre GP03980, and enquired why the Maison had produced a new movement for just one timepiece. Now, that same movement, the Calibre GP03980, sits at the heart of the new Casquette 2.0.

Patrick Pruniaux, CEO of Girard-Perregaux, remarks, “Not all watches retain their looks and desirability with the passage of time. However, since production of the original Casquette ceased in 1978, the interest in this watch has never diminished. We regularly receive enquiries and have witnessed these models attract much attention, fetching 10x their original sales price on the pre-owned market. If only everything we bought increased in value in such a way! Quite simply, the original Casquette serves to further validate our reputation for designing watches with lasting appeal. We are delighted to welcome the Casquette back – a stylish watch that promises a lasting allure.”

In common with the original Casquette, this latest watch displays the hours, minutes, seconds, day, and date. However, the new movement comes with some additional functions, including the month, year, chronograph, second time zone and secret date. This latter function allows the wearer to save a memorable date of the wearer’s choosing. The secret date (date, month and year) can be shown each day at a time specified by the wearer e.g., a wedding anniversary.

The Casquette allows the wearer to view the time on demand, preserving battery life. In fact, assuming the pushers are pressed on average 20 times per day, the battery should last for 2 years. The watch is supplied on a ceramic bracelet with a rubber interior which proves more flexible and comfortable than its counterpart fitted to the original Casquette. The bracelet it now paired with a folding titanium buckle.

During the lifetime of the original Casquette, 8200 pieces were produced. Inspired by this latter figure, GirardPerregaux has chosen to limit the production of the new Casquette to just 820 pieces. The Casquette 2.0 is keenly priced, siting within a new segment for Girard-Perregaux.

In 1976, the Casquette was bought by so-called ‘early adopters’ resulting in many ‘laggards’ missing out. If you are the former, simply pre-order your Casquette 2.0 exclusively on the brand’s e-commerce site from 22.02.2022 to 7.3.2022 to avoid disappointment. Subsequently, the watch will be available in select Girard-Perregaux retailers around the world.

Founded in 1791, Girard-Perregaux is one of the oldest fine watchmaking manufactures still in operation and is appreciated by those in the know. Indeed, the firm’s history is dotted with exceptional creations that skilfully blend aesthetics and functionality. These models include the iconic Laureato, born in 1975, as well as the legendary Tourbillon ‘With Three Gold Bridges,’ a watch that made the invisible visible, transforming bridges from just a technical element to an integral part of the timepiece – a first in watchmaking. Girard-Perregaux’s place at the vanguard of horological innovation is confirmed by over one hundred recorded patents together with numerous prizes and distinctions. It remains one of the few watchmakers to retain Manufacture status for over two centuries by mastering all the required horological skills in-house and making watches infused with a notable degree of authenticity. While Girard-Perregaux respects its heritage, it continues to look ahead, embracing new technologies, state of the art materials, and fresh takes on iconic shapes.

Girard-Perregaux is part of the Kering Group, a world leader in luxury apparel. 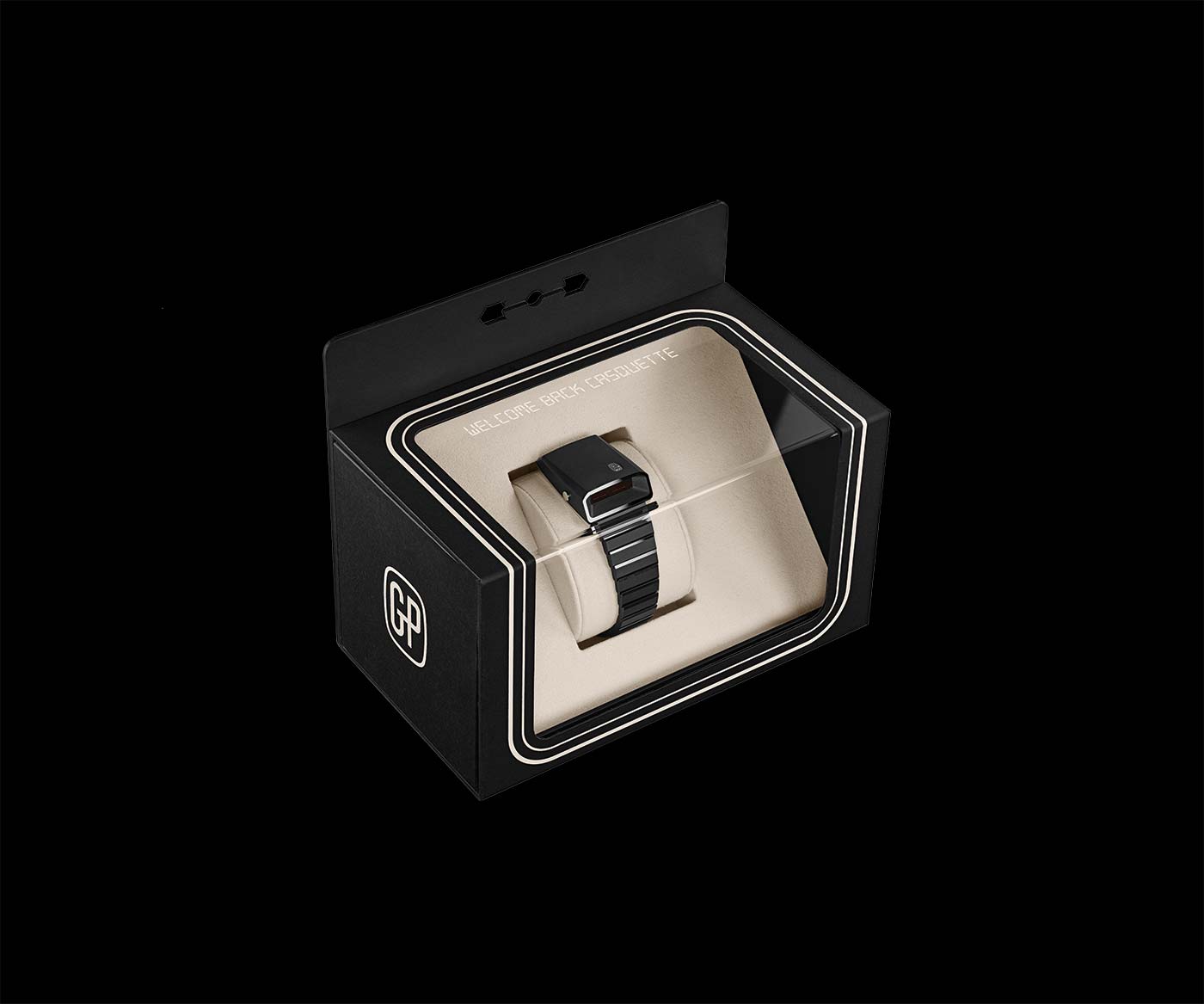 This is Our Story

A Sparkling Afternoon With Maison Messika

In The Aftermath Of The Pandemic, Wellness Is The New Luxury | Jing Daily