Chelsea win their 6th English Premier League title and pay tribute to John Terry at the Chelsea FC «PLAYER OF THE YEAR AWARDS». 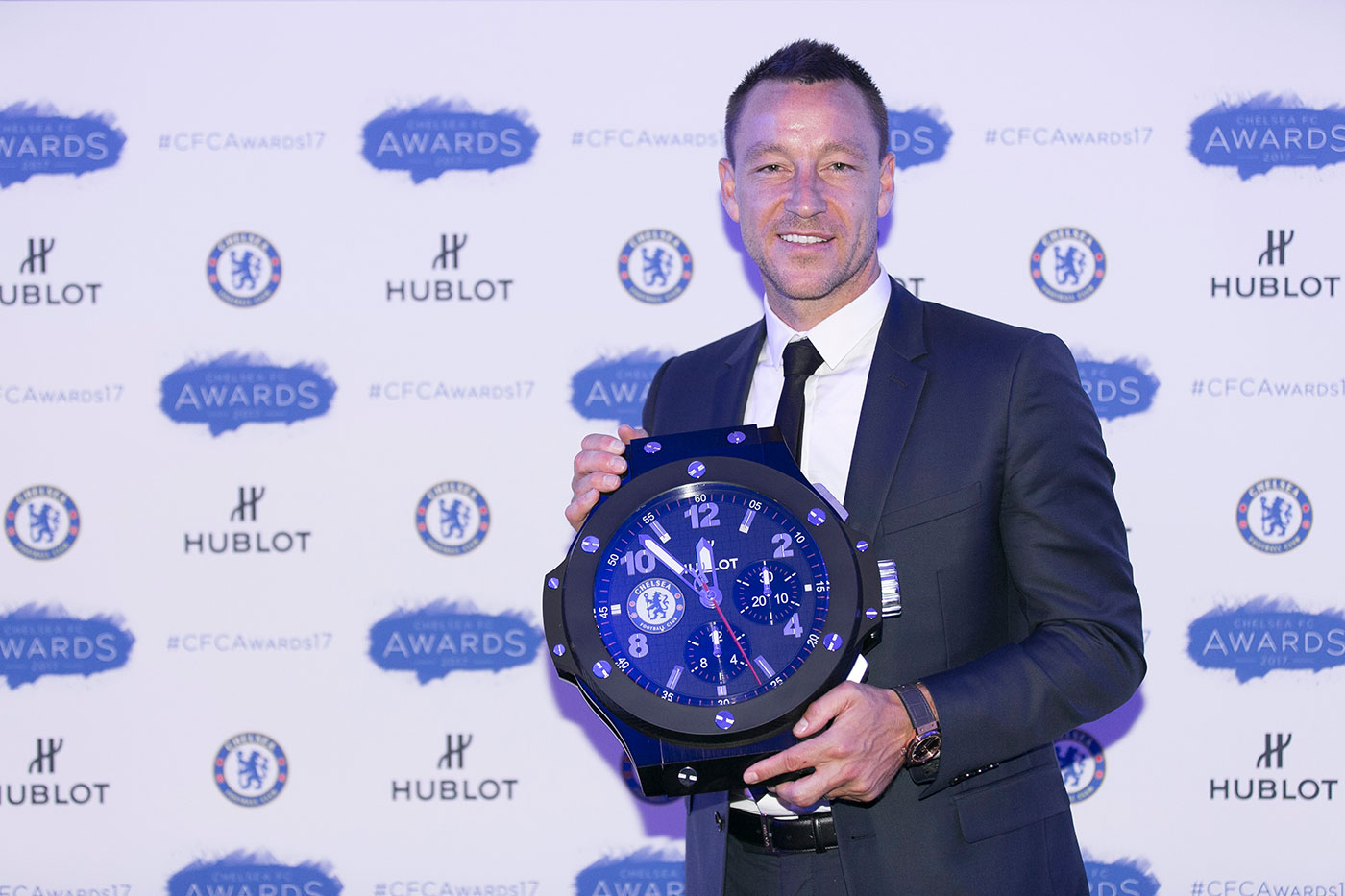 Chelsea win their 6th English Premier League title and pay tribute to John Terry at the Chelsea FC «PLAYER OF THE YEAR AWARDS».

Having dominated English football this season, Antonio Conte’s side are proud holders of a host of titles. The Blues have recently made history. Chelsea have just won their sixth English league title.

At the close of the season, the 51st edition of the Chelsea FC « PLAYER OF THE YEAR AWARDS » 2017 was the perfect opportunity to celebrate this victory as a family. Every year at this time, the Blues unite their players, staff and fans at a gala dinner. The highlight of the evening was the “Player of the Year Award” which, as expected, went to Eden Hazard, who has enjoyed a stunning 2016/17 season. Eden was also designated as the Goal of the Year. On this occasion, a Classic Fusion Chelsea FC was
offered to the Player of the Year. 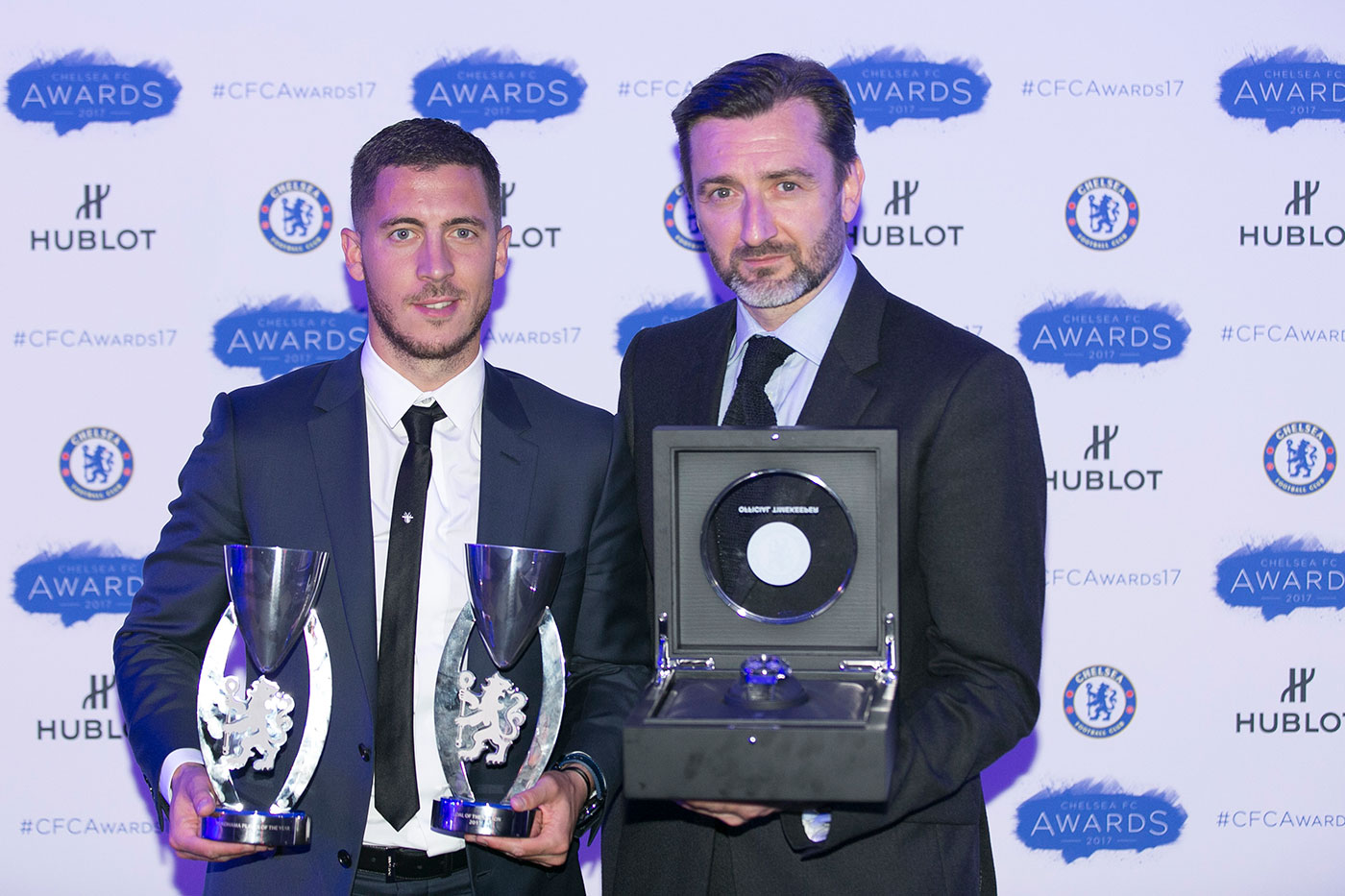 The event also saw tribute paid to John Terry, the club captain who now departs after 22 years of service. Since making his debut in 1998, he has played more than 700 matches for the Blues, captaining them to every major domestic and European honour.

The Hublot Classic Fusion Chronograph is the first watch made in partnership between Hublot and Chelsea, and will be limited to just 200 exclusive timepieces. It features a 45 mm satin-finished and polished titanium case and bezel, and is powered by a calibre HUB1143, an automatic chronograph movement that provides the watch with twin counters at 3 and 9 o’clock, a date window at 6 o’clock and a 42-hour power reserve. The decorated movement can be admired through the watch’s sapphire crystal
case back. The Chelsea lion logo is featured at 12 o’clock, and also on the crystal case back, bringing it as close as possible to the heart of the wearer as it literally touches their pulse.

Hublot and Chelsea have been a team since 2015. Together they have recorded victories and celebrated feats. Football and the measurement of time, making history together.

Chelsea FC is one of the biggest football clubs in the world. Champions in 2014 and 2015, Chelsea won the UEFA Champions League in 2012 and the UEFA Europa League in 2013. Founded in 1905, Chelsea is the most central of London’s clubs. The team plays at the iconic Stamford Bridge ground. The Blues have won the English Premier League six times. Their achievements also include 7 FA Cup titles, 5 League Cup titles, 2 UEFA Cup titles, 1 UEFA Super Cup title and a Football League Championship title in 1955. Chelsea’s victory in the UEFA Europa League makes them the first English club to win the three major UEFA competitions and the first ever club to simultaneously hold the Champions League and Europa League titles. As well as a team of charismatic players, Chelsea has as its manager Antonio Conte, one of the most highly respected figures in international football. 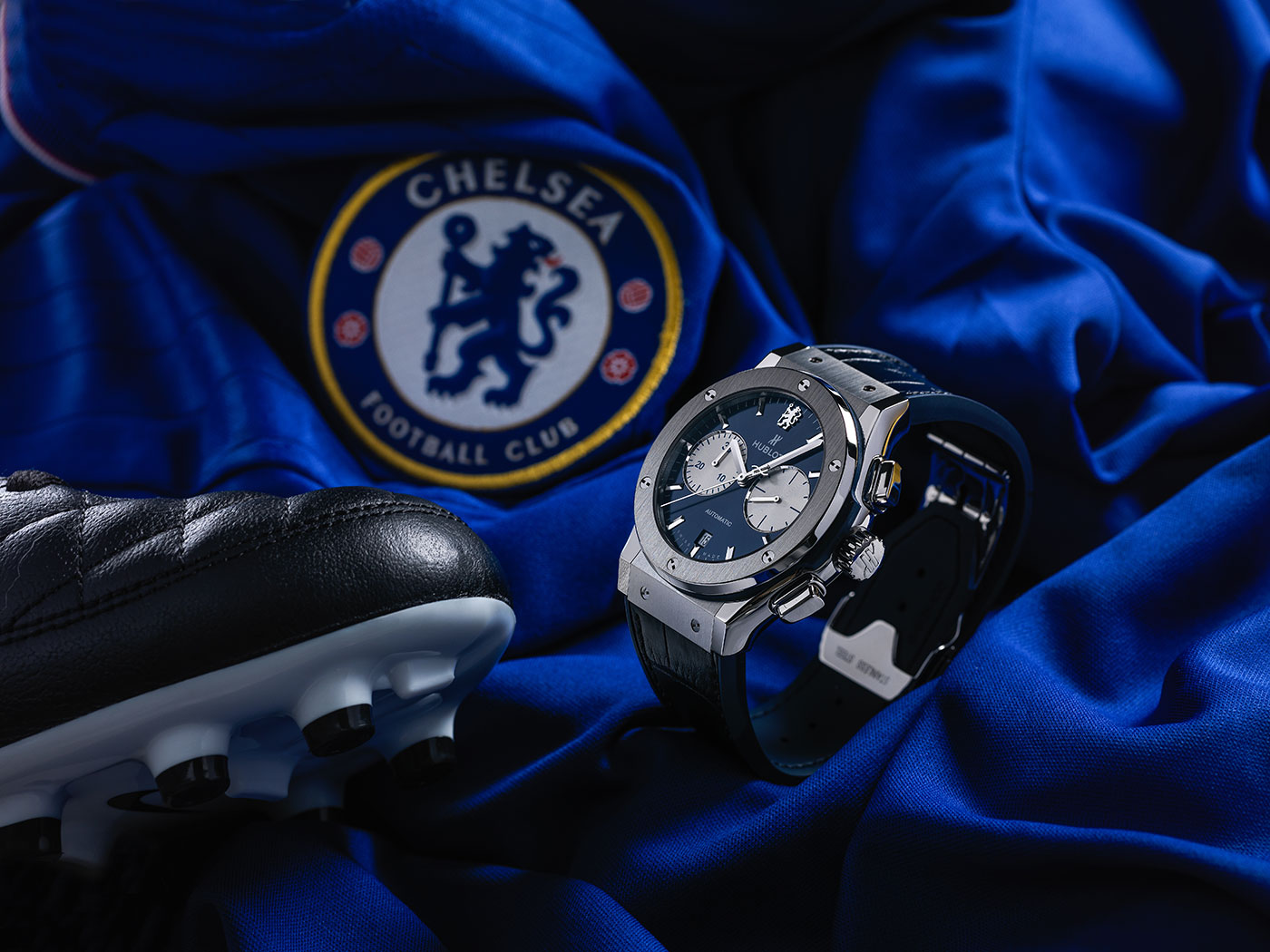 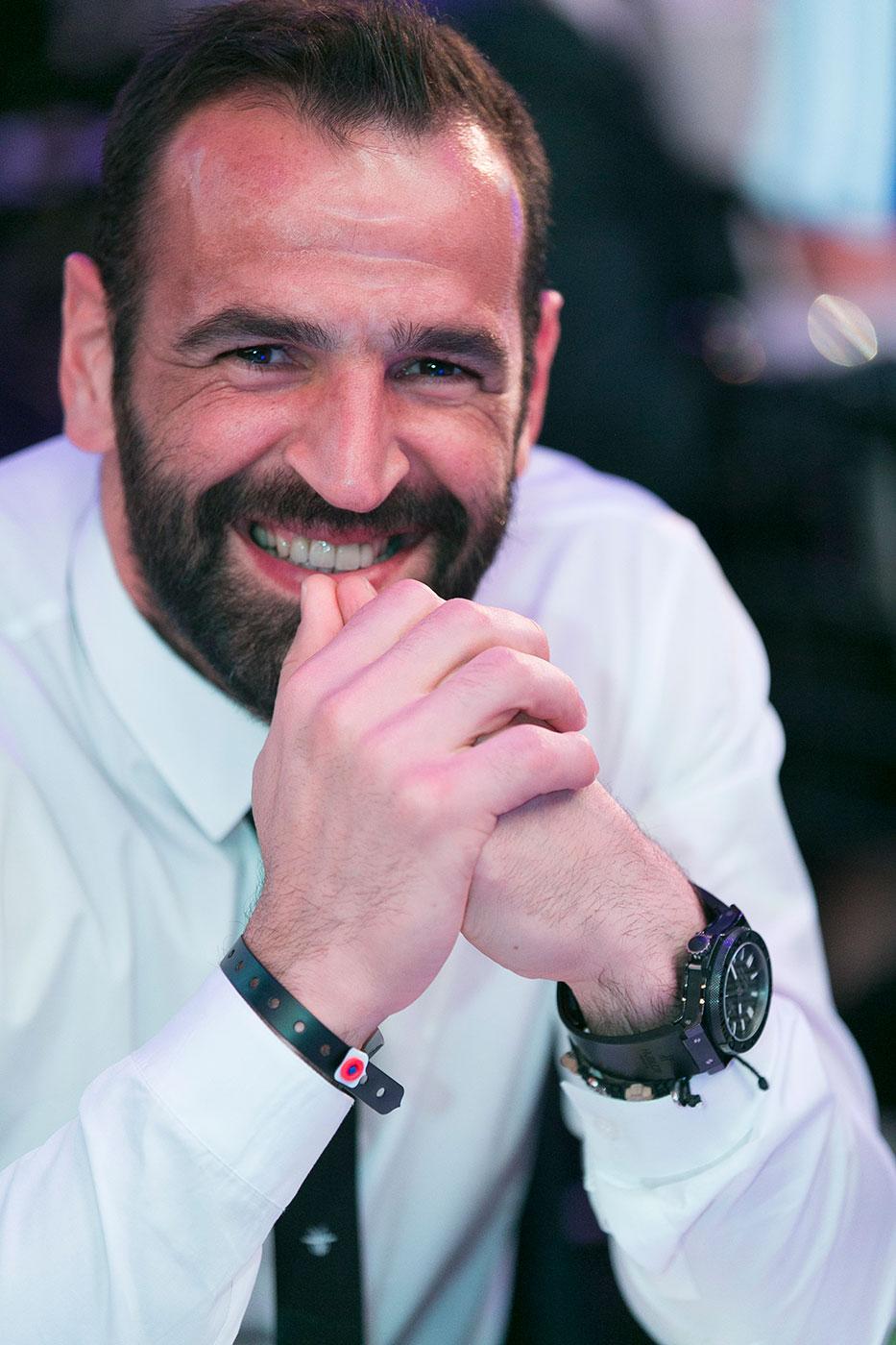 Chelsea Football Club is one of the world’s top football clubs and current Premier league champions. UEFA Champions League winners in 2012, the club followed that success by lifting the UEFA Europa League trophy in 2013. Founded in 1905, Chelsea is London’s most central football club, based at the iconic 42,000-capacity Stamford Bridge stadium.

Nicknamed ‘the Blues’, Chelsea are five-time English Premier League champions and have also lifted the FA Cup seven times, the Football League Cup five times, the UEFA Cup Winners’ Cup twice, the UEFA Super Cup once and the Football League Championship once, in 1955. The Europa League triumph saw Chelsea become the first English club to win all three major UEFA competitions, and the first club ever to hold both the Champions League and Europa League at the same time. In addition to possessing some of the world’s most recognisable players and head coach Antonio Conte, the club has also invested in its future with a state-of-the-art Academy and training centre in Cobham, Surrey. Since its opening in 2007, Chelsea have lifted the FA Youth Cup trophy six times and the UEFA Youth League twice. The Chelsea Ladies team also won the FA Women’s Super League and FA Women’s Cup Double in 2015.

Additionally, the Chelsea Foundation boasts one of the most extensive community initiatives in sport, working in 30 countries around the world, helping improve the lives of more than 900,000 children and young people each year.

“Hublot – « A different way to progress » say those who know this unique Swiss luxury watch company, where each and every moment moves forward to create the future at breathtaking speed. A dream, initiated and developed by Hublot’s Chairman Jean-Claude Biver with CEO, Ricardo Guadalupe, these two men are responsible for turning the Hublot brand into a genuine success story in which the Big Bang, Classic Fusion, Spirit of Big Bang and Manufacture Pieces represent the symbols of a constantly evolving tradition. From watch complications and revolutionary materials to world class collaborations such as FIFA World Cup™ and Ferrari, Hublot characterizes itself through the “Art of Fusion” philosophy, bringing tradition into the future. On a commercial level, the network of stores currently stands at more than 80 exclusive boutiques around the world (Geneva, Cannes, Saint-Tropez, Paris, London, Berlin, Moscow, New York, Miami, Beverly Hills, Las Vegas, Atlanta, Singapore, Shanghai, Beijing, Hong Kong, Dubai, Abu Dhabi, Kuala Lumpur, Ginza, Frankfurt, Zermatt…). For more
information, visit www.hublot.com