For a number of years now, the Scandi style with its minimal, monochrome aesthetic has been cultivating a strong following in China. It’s little surprise then that, this season, the Jing Daily Fashion Week Score traveled to Scandinavia’s most sought-after fashion capital, Copenhagen.

From February 1-4, Copenhagen Fashion Week was largely back to normal, but still took a hybrid form: 21 physical showcases, two digital screenings with events, seven digital premieres, events, talks, activations, and two trade fairs. And with the announcement that all domestic pandemic restrictions would be lifted, there was a sense of excitement at the event. Copenhagen Fashion Week’s CEO Cecilie Thorsmark stated in her opening speech, “Today is a very special day. Not only is it the first day of Copenhagen Fashion Week, but it is also the first day in a very long time that things are back to normal here in Denmark.”

Still, due to ongoing travel limitations in China, few local KOLs and celebrities attended. There were, however, some familiar faces: fashion entrepreneur Betty Bachz, stylist Declan Chan, and Chinese blogger Nuria Ma. There were more Chinese models on the runways too, among them the popular face Jiao Jiang, who appeared in nine shows, including presentations by Skall Studio, (di)vision, and Saks Potts.

Given the demand for niche cult names in China, Copenhagen offers this point of interest for the country’s youthful fashion eyes. “You’ve got well-versed brands that have already gained widespread recognition worldwide like Ganni, Stine Goya, and Cecilie Bahnsen,” Bachz enthused. “Judging by the CPHFW AW22 runways, I’d say that Holzweiler and Samsøe Samsøe are perhaps most ready to scale up their business and equipped to take the Chinese market next.”

Here, Jing Daily focuses on the Scandi brands already familiar to Chinese consumers but are looking to expand in China’s market. We used the following parameters to access our scores:

Who doesn’t want to be a #GanniGirl on social media? And who hasn’t been? The creative couple behind this brand, Ditte and Nicolaj Reffstrup, never disappoint the market by continually producing the unexpected.

When taking over the dormant company in 2009, they didn’t even bother to change the name. But today, it is the easiest brand to define. Ganni is the one brand that has a worldwide cult following, continuously raises the bar for sustainable fashion, and always redefines the so-called Scandi style.

After its official launch on Tmall in June 2021 (and with a full presence already on Chinese social media platforms Weibo, WeChat, and Xiaohongshu), the brand announced its full entry into China. In its eight months in the country, #GanniGirls has accumulated more than 770,000 views and discussions on Xiaohongshu while Chinese customers have seen numerous local celebrities wearing the brand, including Zhou Xun, Nana Ou-Yang, Dilraba Dilmurat, and Song Yanfei. Just in time for the Chinese New Year, the brand also launched a limited edition capsule collection celebrating the occasion. Soulland was founded in 2002 by founder and creative director Silas Adler as a small streetwear collection serving the local artistic, skateboarders, and graffiti community. But it grew into a contemporary fashion brand dedicated to a socially just and environmentally responsible future. Notably, this collection (known as Original Memory) was shown at a former railroad workshop called Lokomotivværkstedet, where the Chinese model Erica Duong walked the show.

The only collaboration with a Chinese brand at the event was an impressive one: Soulland & Li-Ning. As a continuation of their partnership project Pre-Inter-Post, the brands put the sport of running in the spotlight. The three-chapter collection showcases styles meant for use before, during, and after running. While the previous collaboration focused solely on INTER, this new drop had PRE and POST as its focal points. Netizens on Weibo went wild for the collab which secured the brand a high ranking. The partnership has attracted an impressive amount of attention from press and fashion bloggers leading to a remarkable social reach of 12 million netizens in total. When Barbara Potts and Cathrine Saks established the brand in 2014, they were trying to create unique and high-quality outerwear that they would want themselves but couldn’t find. Now, it’s the answer to winter coats for Kendall Jenner, Kylie Jenner, and Cardi B. While the niche label had no presence in China until recently, Chinese actress and singer Esther Yu helped change that when she wore its blue fur coat in 2020, generating 14,000 likes and 274 comments on Xiaohongshu. Since then, Saks Potts has become one of the go-to names for outerwear and down jackets — a highly competitive sector on the mainland.

Bachz told Jing Daily: “It’s no surprise the brands like these have gained this much traction with their focus on functionality and sustainability. Scandinavian design is first and foremost wearable: a no-frills, no-fuss fit for the lifestyle of a modern woman. It is about getting maximum impact with minimum effort.” An international fashion brand rooted in Scandinavian simplicity, Samsøe Samsøe has been around for nearly three decades. Simple design and premium quality, as well as effortless shapes and silhouettes all factor into its hard-won popularity — especially among its large number of Chinese professionals that favor business casual.

CEO Peter Sextus described 2022 as an exciting year for the brand, one in which it is focusing on expanding in the Asian market (Korea, China, and Japan). And even without Chinese social media, it has generated attention for its recent marketing campaigns. In its Pre-Spring 2022 unisex capsule campaign, the brand featured couples as its models; this unique initiative created an approachable atmosphere and attracted a wide range of discussions online.

The theme of this season’s show — Past Present Future — was low-key and sharp as usual but with more lively and dynamic colors. Perhaps this message points to a new direction? According to Bachz, these “relaxed, oversized silhouettes and concepts” from the new head of womenswear (Meme Marta Fagiuoli) show confidence in the domestic market. Marimekko was one of the first Scandi brands to set its eyes on China. Its first official foray into the market came in 2012 with the opening of its first standalone retail store in Hong Kong. Now, after ten years of growth locally, there are around ten Marimekko stores in Greater China, “a Marimekko online store on T-mall, [and] official presences on WeChat, Weibo, and Xiaohongshu,” Sanna-Kaisa Niikko, chief marketing officer, stated.

Marimekko has been a lifestyle brand from the outset, combining fashion, bags and accessories, and home products into an expression of joyful living. “These form the core values that make our designs distinctively Marimekko and differentiate us from the other brands in the highly competitive fashion market in China,” Niikko added.

The long-established Finnish textile & clothing design house — renowned for its use of printmaking — captivated Chinese customers with its timeless patterns and its no-boundary presentation when it comes to product categories. The label has been actively collaborating with local brands, KOLs, bloggers, and creatives since launching its social media in the country. In 2021, it worked with specialty coffee chain SeeSaw for a limited-edition gift set and accessories. 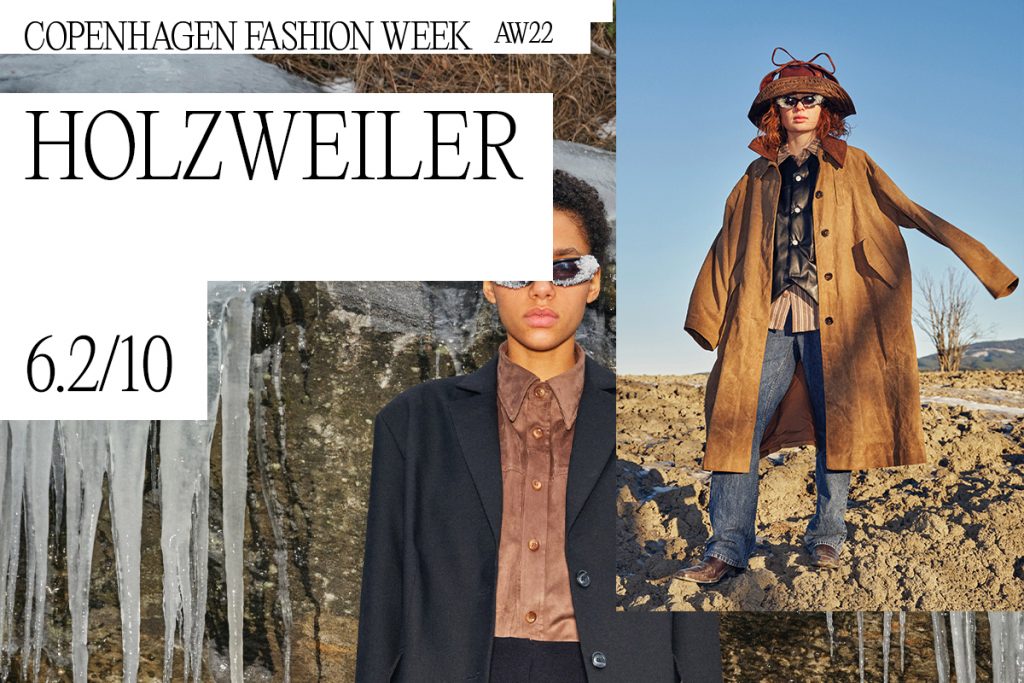 For Holzweiler’s digital presentation this season (called Weathering), a team of young, Scandi friends went on a road trip in chunky but fashionable winter clothes, wearing, of course, great scarves. Long before its official presence on Weibo in 2019, savvy Chinese consumers were already comparing their wool scarves with the prices and textures of those from another well-known Swedish brand, with Holzweiler winning their hearts in the end.

In September 2020, it moved its special exhibition collab with the Norwegian spatial designer Ali Gallefoss from Paris to Beijing, placing it in a Holzweiler popup at Dover Street Market. This domestic market trial continued with another popup in the newly opened SKP-S Beijing, making it the first Scandinavian brand to enter the SKP-S. For the occasion, it collaborated on a line exclusively for SPK-S customers.

Although its China expansion plan has been put on hold since then, the brand still garners a good amount of social media attention — around 7,000 followers on Weibo and 600 discussions on Xiaohongshu. “Holzweiler has in a short period achieved a level of success that few family-driven brands have ever seen,” Bachz stated about the company’s rosy outlook on the mainland. “Their unwavering focus on ‘basics with a twist’ and quality fabrics has gained them a die-hard fanbase, and I could easily see this effortless, streetwise aesthetic gaining favor with the Chinese consumers.” China is ready for the Scandi invasion.