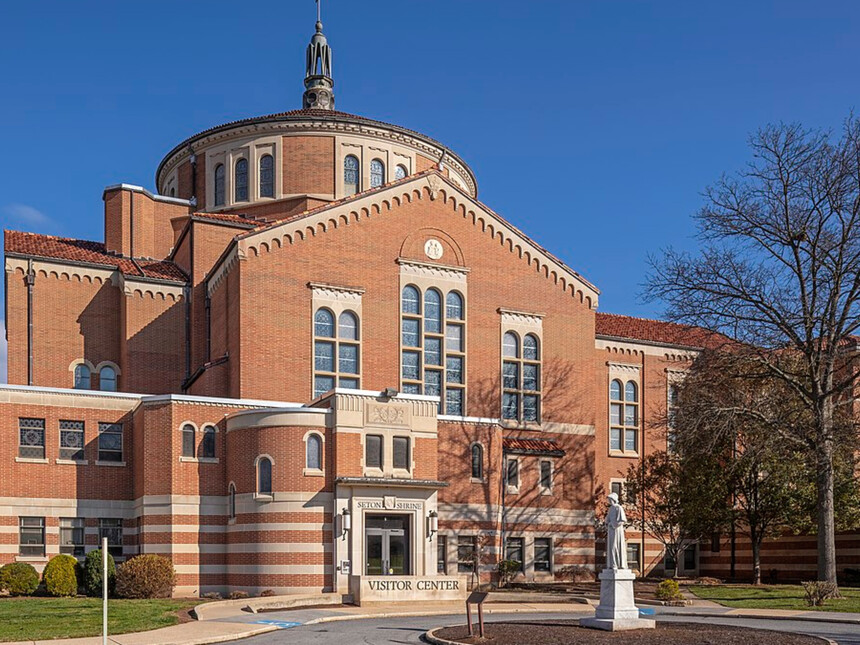 Nestled in the rolling hills of Emmitsburg, Maryland is Seton Shrine, the home of Seton Basilica and the final resting place of Mother Seton. She is the first American saint of only three in the Catholic Church’s history.

Mother Seton was born Elizabeth Ann Seton in New York City in 1774, two years before the American Revolutionary War would conclude. It’s thus fitting that hers was a pioneering spirit, serving her well at a time when Catholics and independent women faced extreme discrimination.

Seton became a widow at age 29 and was left to care for five children under the age of eight. In addition to burying her husband, Seton would also bury two daughters in her 46 years of life.

Seton and her children relocated from New York City to Baltimore in 1808, four years after Seton’s conversion from the Episcopal faith to Catholicism. They then moved approximately 75 miles up the road from Baltimore to Emmitsburg so that Seton could start the Sisters of Charity of St. Joseph’s, which attracted women from around the young nation.

Wealthy sanitarian Samuel Cooper gifted the 23-acre property upon which the Sisters of Charity of St. Joseph (now, the site of Seton Shrine) sat. Cooper and the Church handpicked Seton to mold the area’s impoverished young women into the nuns and wives of the next generation. Seton’s St. Joseph’s Academy would become the first parish school in the US. At the time of Seton’s death in 1821, up to 70 underprivileged girls were either boarders or day learners.

In addition to their work managing the school, Seton and the Sisters established two orphanages outside of Emmitsburg, in Philadelphia (in 1814) and New York (in 1817).

The Catholic Church recognized Seton’s contributions and reported miracles and declared her the first American saint on September 14, 1975. She’s also considered by the Church to be the patron saint of Catholic schools, widows, and seafarers.

Almost 50 years later, the expansive Emmitsburg property and its various exhibitions are accessible daily to visitors. At the White House (Seton’s residence once she outgrew the smaller Stone House), guests are treated to a live immersive experience. Women and girls in 1800s garb likewise speak in 1800s lingo with 1800s English-influenced tonality as they showcase the home’s schoolroom, chapel and sleeping quarters. The actresses refer to Mother Seton in the present tense even as cell phones ring and delighted patrons (like this one) giggle in amusement.

Walking through the White House and Stone House brought me back to Denmark’s Open Air Museum, which likewise offers a glimpse at life in the 1800s. The Open Air Museum, part of the National Museum of Denmark network, is a short and scenic train ride outside of Copenhagen. I remember staring into the eyes of a lamb while on the property and rethinking my tendencies to enjoy a lamb chop – until the next time I went to a Middle Eastern restaurant.

Back to Mother Seton. For most, the highlight of their time at Seton Shrine is worshipping in the grand Basilica. Completed in 1965, the cathedral seats into the hundreds of people and just as many votives. It provides a taste of European-style architecture in the middle of an otherwise rural, somewhat isolated area.

My personal favorite part of the Seton experience is the Marian Room, which houses interpretations of the Virgin Mary from around the world. The tens of icons, from Portugal, France, Cameroon, Angola, Korea, Japan, China and places in between, logically vary in facial features, dress, and materials. As someone who grew up in a home with Eastern Orthodox iconography, I couldn’t help but appreciate the multicultural Marian Room in this otherwise American setting.