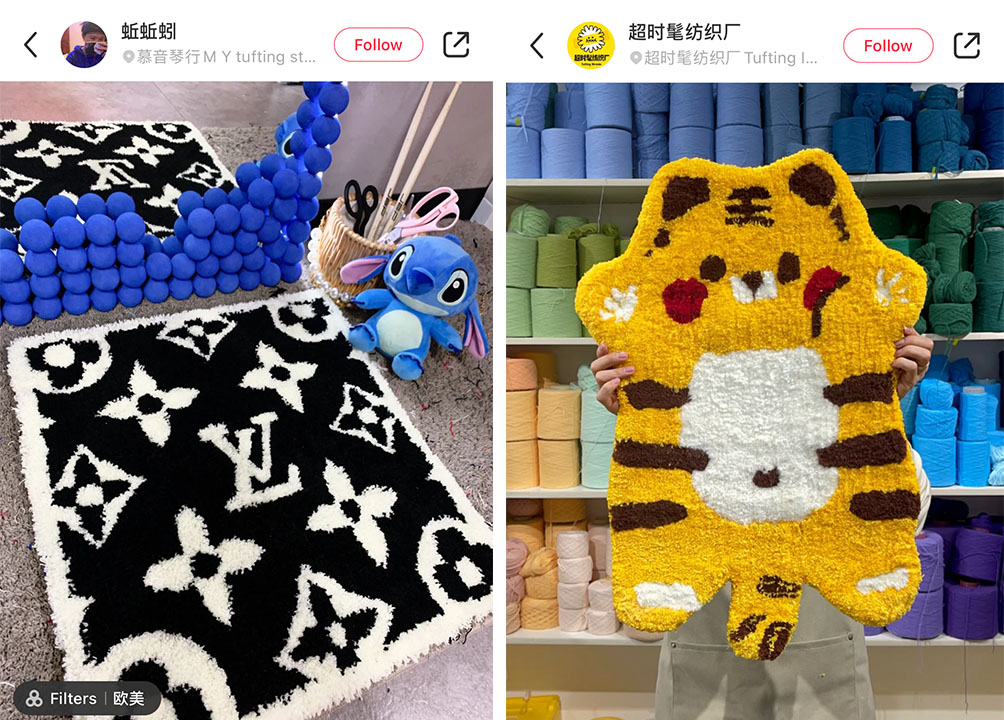 It’s official: According to the local lifestyle app Xiaohongshu, “tufting” has become one of China’s most popular indoor activities for both white collar workers and college students. In the first quarter of 2022, searches for “tufting” have increased by an astounding 566 percent quarter on quarter on the platform while related posts have received over 73 million views.

Tufting’s ability to relieve people’s stress as, especially now, during China’s rolling lockdowns, as well as pride in showcasing often up to five-hour-long results on social media have been the main drivers behind the trend’s virality. Given the hype, more and more “tufting” laboratories have recently opened in China.

However, it’s still hard to predict whether the craze is here to stay or not. Most people join “tufting” workshops with a FOMO or “打卡” mentality. But right now, its popularity is undeniable. Perhaps luxury could tap the fad by offering “tufting” experiences in their pop-up installations or as an in-store activity to replicate the vast interest the trend is gaining from Gen Z consumers.

The pandemic has served as a vector for the rise of both artisanal and DIY activities. “Tufting,” called 簇绒 in China and meaning traditional rug-making, is the latest trend suddenly gaining popularity with local Gen Zers. After drawing an outline on a cloth, people can use a tufting gun to play a coloring game with a wide variety of wools.

For the past few months, domestic urban youths have been meeting up with friends at ‘”tufting” workshops, where they spend 4-5 hours creating their own unique carpets, bags, or phone covers. Making a whole rug demands a significant time commitment, but it is highly creative and has become a preferred way to spend the weekend.

DIY activities have been going viral in China. According to Xiaohongshu, the number of “tufting” UGCs released on the lifestyle platform in Q4 2021 increased by five times, month-on-month.

This trend reinforces how local Gen Zers and Millennials are very different from their previous generations. Social media has contributed massively to the spread of these niche trends, and people now express their unique personalities online through their one-of-a-kind creations. Arnold Ma, the founder of the marketing agency Qumin, said, “They are more focused on themselves and less so on the collective. There are lots of opportunities [for luxury brands] here.”

He continued, stating that brands could leverage “the trend of self-expression and the Creator Economy by asking consumers to create their own interpretation of a brand logo or asset.” Anaïs Bournonville, head of the luxury division at Gentlemen Marketing Agency, agreed, adding that “luxury brands have a card to play by including their customers in the creative process.” She suggested that Maisons could tap into the social aspect of this trend by launching “tufting contests on social media.”

In an era when young Gen Zers seem glued to their phones, they also, paradoxically, enjoy experience-driven activities at popups and workshops. Today, luxury houses must think of a customer “not just as a purchaser but as a co-creator,” states Bournonville. Therefore, actively encouraging consumers to participate in the creative process can be one way to attract young shoppers to your brand long term.

Son of the Sky