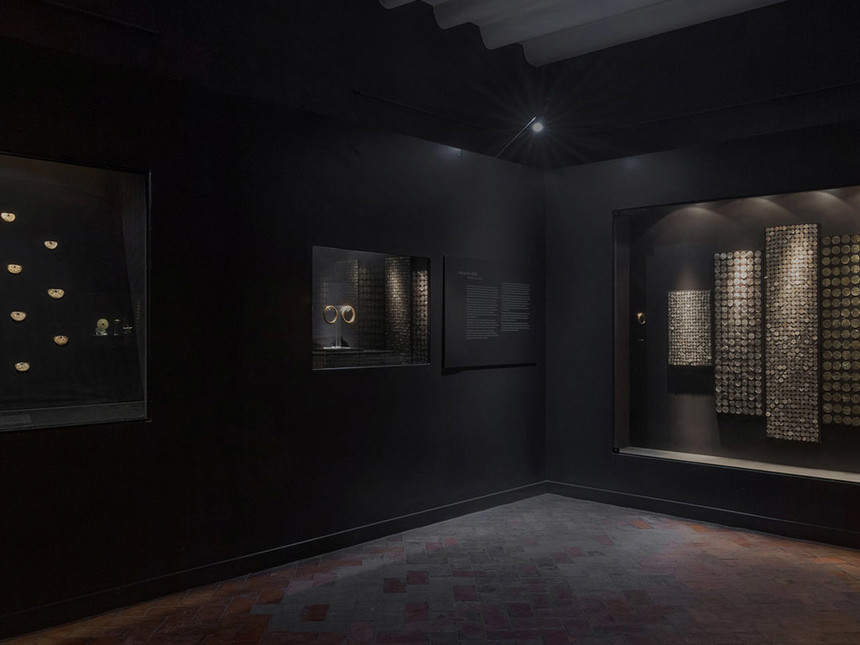 Gold is a ductile, incorruptible and malleable metal believed by these societies to originate in the divinities and that must be returned to them as an offering that the most skilled craftsmen transformed to the maximum degree of ceremonial beauty. While on the one hand aesthetics reached their maximum expression in the work of gold ritual objects, on the other, the attires worn by the elites, made with precious metals, jewels and accessories, sought to reinforce the connection between the different worlds.

Complementary duality was the social, political and administrative organizing principle of the Inca Empire: the worlds above and below, man and woman, gold and silver, day and night. The forces that animate the world are opposite and at the same time complementary, the energies that govern the evolution of the universe and whose dual nature creates an aesthetic harmony-based approach to the creation of artistic objects.

The high technological specialization of pre-Hispanic silversmiths was evidenced in a marked sense of proportions and balance. Stylized designs of natural elements or synthesized expressions of their environment were an integral part of their metallurgical production. These gold earrings feature a simple yet elegant design of concentric circles, with possible connotations associated with the expansion from a center. Several modern Western artists have underscored the high level of abstraction present in the art of ancient peoples.

In pre-Hispanic societies, those who used the imposing gold costumes, both in ceremonies and in elaborate funerary furnishings, symbolically appropriated the powers of the species that the jewels represented. These gold earrings show designs of seabirds, which had the ability to link the world above with the marine world, in a sequence of perpetual cyclical repetitions, a universal resource of art.

ZENITH AND FELIPE PANTONE COLLABORATE TO CREATE THE MANUFACTURE’S FIRST WATCH DESIGNED WITH A CONTEMPORARY ARTIST: INTRODUCING THE DEFY 21 FELIPE PANTONE, A HIGHLY CHROMATIC AND VISUALLY STRIKING TIMEPIECE THAT BRINGS A DIFFERENT NOTION OF ART TO WATCHMAKING.

Why Chinese Men Want to Be Beautiful | Jing Daily