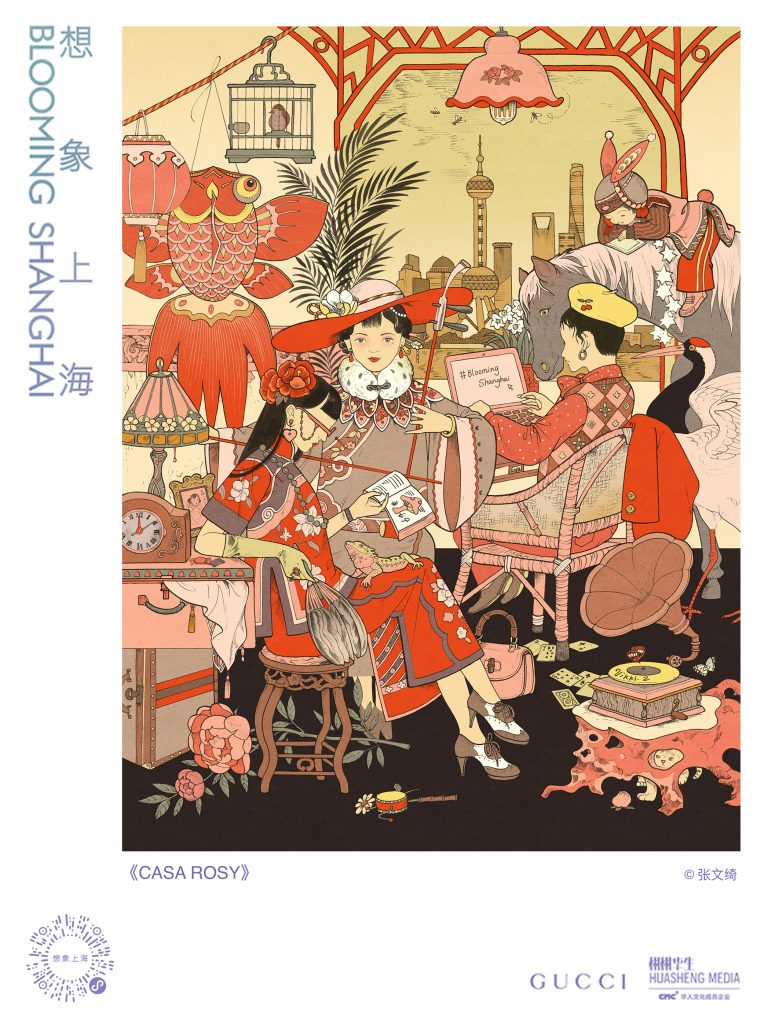 Shanghai — also known as China’s Modu (meaning Magic City in Chinese) — is being celebrated with a dynamic call out to the capital’s 25 million dwellers. Gucci and local media powerhouse Huasheng Media Group are launching “Blooming Shanghai,” a cultural artwork project that is open to everyone who feels connected to the metropolis, regardless of where they live, and asking them to explore its infinite possibilities and beauties.

In addition to holding a leading position in China’s economic development, Shanghai is the country’s most populous city. Its scale and complexity has not only allowed it to become the ultimate luxury hub in China, but also inspired global brands to embrace its rich culture and modernity. As a large-scale public artistic creation program on “city imagination,” “Blooming Shanghai” perfectly leverages this idea.

Here, Jing Daily takes a closer look at the “Blooming Shanghai” project, its timing, and the importance of Shanghai in the house’s strategic map.

On rolling out the inclusive project, Robert Triefus, executive vice president for brand and customer engagement at Gucci, commented: “We are proud to support this inspiring call to create and help shine a light on the city of Shanghai and its beauty.” The company has also partnered with its brand ambassadors including Ni Ni, Xiao Zhan, and Lu Han, to send out virtual invitations via their Weibo accounts. These have generated over 500 million views for the campaign hashtag #BloomingShanghai within one week.

The role public art plays in the collective memory of communities has been well documented in modern and contemporary art. Therefore, collective memories are commonly seen in localization campaigns in order to resonate with audiences. “With modern Shanghai as the backdrop we have a deeper faith in diverse creativity, community cohesion, the magic of art, the narrative of beauty, and the value of exploration,” said Feng Chuxuan, founder and editor-in-chief of Huasheng Media. And, as “Blooming Shanghai” is multidisciplinary, it welcomes all forms of art such as literature, painting, photography, and installation.

Finally, the city itself will be used to contextualize the creators: curating displays of works in a public space will fuse the branded project with the city landscape. One of the selected pieces will then be realized on the Gucci Art Wall –  the only Gucci Art Wall in Mainland China – located in Fengsheng Li, a retail block transformed from the historic shikumen lane houses. Additional works will be exhibited in other cultural spots of Shanghai, drawing visitors into an imaginative universe inspired by the city’s beauty.

A selected artwork “Casa Rosy” by Zhang Wenqi. The artist draws inspiration from Haipai School (referring to the “East Meets West” culture that emerged in early 20th century) and depicts modern Longtang (a distinctive residential building in Shanghai) that pooled the ideas in different times. Photo: Courtesy of Zhang Wenqi

Shanghai has always been an inspiring axis for Gucci

Gucci’s love of Shanghai is obvious. Its centennial exhibition “Gucci Garden Archetypes” arrived here in June last year — the first stop of the immersive multimedia exhibition’s global tour following its debut in Florence. The show even included an exclusive room for local visitors dedicated to the city. The Italian luxury house presented the Aria collection through a special fashion show held at the Shanghai Exhibition Center. Recreating the set and atmosphere of the Gucci Aria film, co-directed by Floria Sigismondi and Alessandro Michele, the event featured never-before-seen runway looks.

Whether it’s creating exciting and exclusive experiences for Shanghai residents or unveiling a public art program, Gucci is embracing a new customer relationship that allows consumers to be vocal and visible while consolidating the brand’s creative DNA.

Though Shanghai went through difficult times over the past three months, the city holds an irreplaceable position in the Chinese market for leading luxury houses like Gucci. With this in mind, re-engaging local consumers (not only physically but emotionally) is critical for brands in one of the largest regional markets. So far, Gucci’s effort gets top marks.

The Wish List: Let The New Bohemian Be Your Style Inspiration This Week