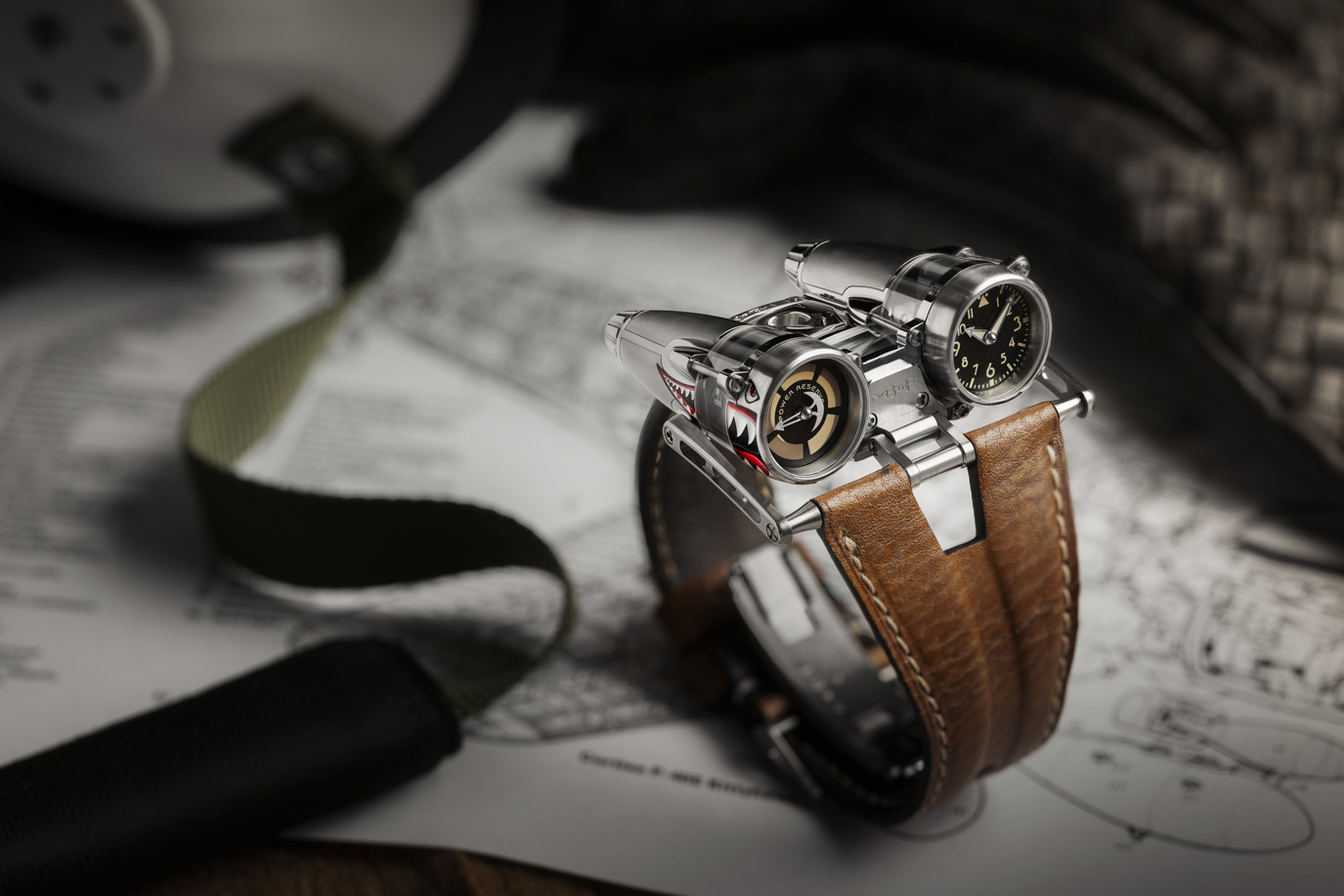 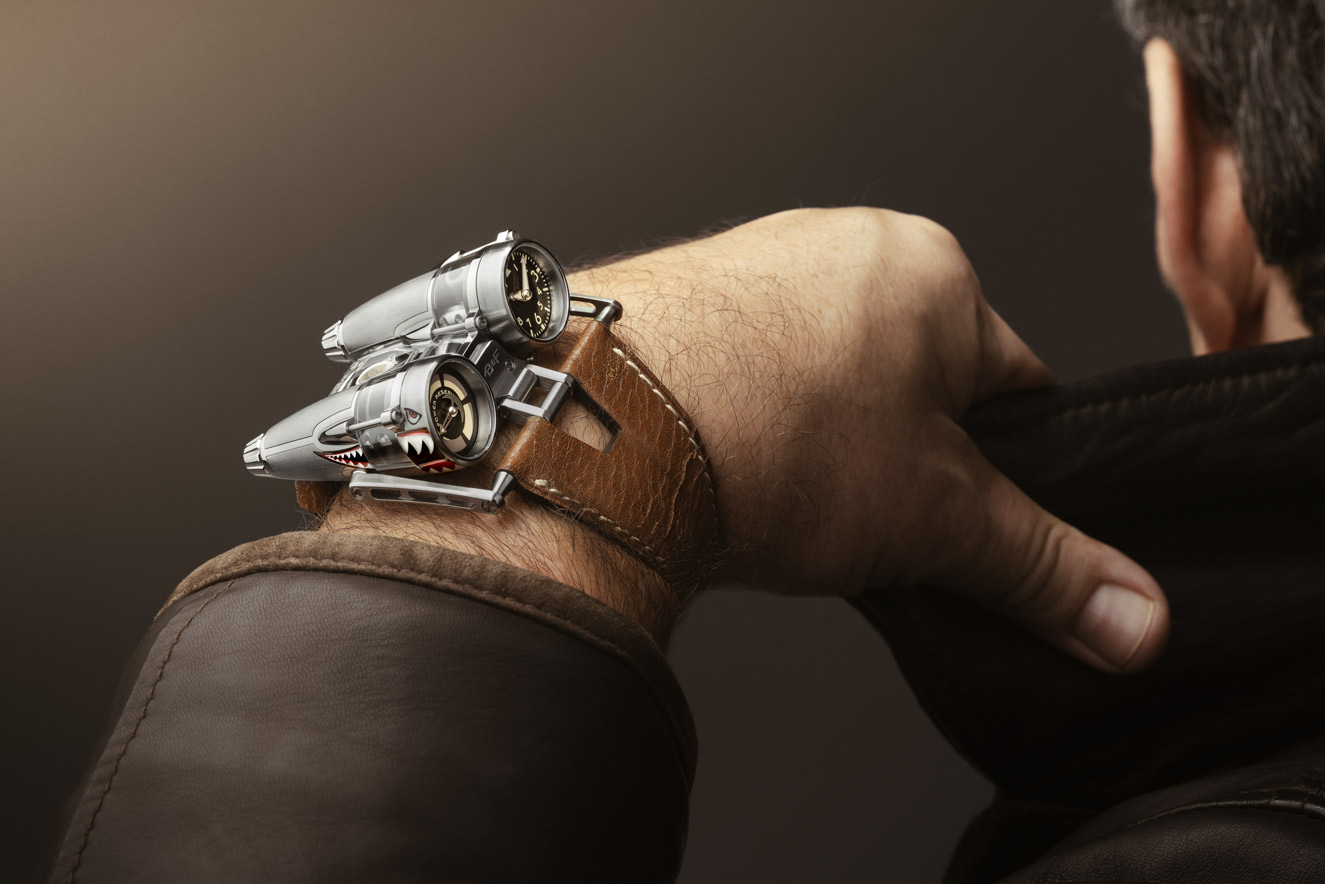 HM4 is not a traditional wristwatch.

The aviation-inspired case and engine of the HM4 are one. Neither would, nor could, exist without the other, yet each is so transcendental as to be able to stand alone as a work of art in its own right.

The HM4 engine is the culmination of three long years of development. Each of the 300-plus components – including the regulator and even the screws – was developed specifically for this anarchistic calibre. Horizontally configured dual mainspring barrels drive two vertical gear trains, transferring power to the twin pods indicating hours/minutes and power reserve.

But describing HM4’s engine through its mechanical functionality is like describing Renoir’s work through the chemical composition of his paint. Only careful contemplation enables full appreciation, and the sapphire case section and display panels top and bottom allow full access to the flawless fine finishing of HM4’s intricate and vibrant micro-mechanics.

The sleek aerodynamic form of Horological Machine No4’s envelope has its roots in Maximilian Büsser’s childhood passion for assembling model plane kits, though none looked remotely as futuristic as these. The striking transparent sapphire section of the case requires over 185 hours of machining and polishing to transform an opaque solid block of crystal into a complex, exquisitely curved panel allowing the light to come in and the beauty of the HM4 engine to stand out. Every component and form has a technical purpose; nothing is superfluous and every line and curve is in poetic harmony. Articulated lugs ensure supreme comfort. Highly legible time is a fringe benefit.

– HM4 Thunderbolt: launched in 2010, nicknamed after the A-10 Thunderbolt aircraft; case in titanium/sapphire.

– HM4 ‘Razzle Dazzle’ & ‘Double Trouble’: presented in 2011, these limited editions of 8 pieces each take the aviation theme even further with real rivets in their titanium fuselages and hand painted nose art, inspired by the rebellious paintings on WWII aircraft.

– The HM4 Final Edition closes the HM4 series in 2013 with a limited edition of 8 pieces in blackened titanium and sapphire. 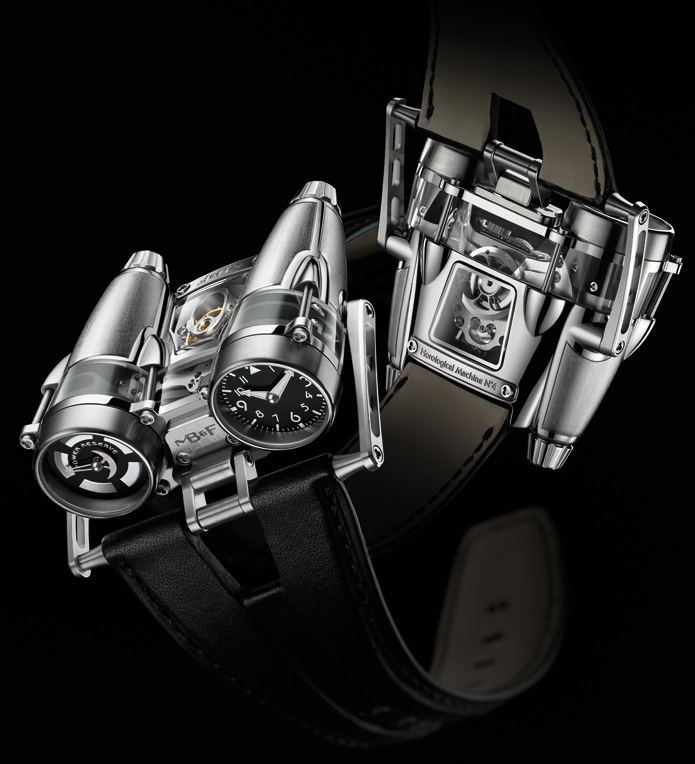 Many boys sketch supercars and fast planes, but few have the drive and determination to make their dreams come true. Büsser created MB&F to do just that. The HM4 Thunderbolt is born of the child’s fantasy and the man’s tenacity.

HM4’s engine was entirely designed and developed by MB&F over three years of intensive work with Laurent Besse and Beranger Reynard. Each of the 311 components were developed specifically for HM4, no off-the-shelf mechanisms or parts were used at all due to the extreme nature of its architecture.

Two mainspring barrels connected in parallel provide 72 hours of energy, and they transfer their power to the dual jet-turbine-like indication pods (one displaying the hours and minutes, the other the power reserve) via vertical gear trains.

Visible through a shaped sapphire display panel on the top of the case, a distinctive streamlined cock supports the balance, its centre cut away to reveal as much of the oscillating wheel as possible and validating the “kinetic” in MB&F’s “kinetic art”.

A work of art rewards when viewed from different angles and the HM4 is no exception. Turning the machine over reveals a veritable panorama of meticulously finished micro-engineering through the sapphire sections. In a playful trompe l’oeil, what at first glance appears to be a micro-rotor in the form of MB&F’s iconic battle-axe is actually a bridge.

For a timepiece not developed specifically to tell the time, HM4 performs that role superbly. In fact, with its highly legible dials perpendicular to the wearer’s wrist, Horological Machine No4 might be described as the perfect pilot’s or driver’s watch.

On the left pod, the power reserve is clearly indicated by a skeletonised hand echoing MB&F’s battle-axe motif. On the right, hours and minutes are displayed by bold, arrow-tipped Super-LumiNova filled hands. Each of the two aviation instrument-styled dials is directly controlled by its own crown, one to wind and re-fuel the tanks, the other to set the time, which provides direct and instantaneous feedback of the action performed.

Inspired by aviation, more specifically the model aircraft kits of Maximilian Büsser’s childhood, the case of HM4 imparts speed, power, technology and refinement in equal measure. Visually, the case is composed of three parts: two streamlined jet-turbine-styled pods supported by a horizontal section housing the engine, which is clearly visible through transparent sapphire display panels and the central section of the case itself.

Technically there are also three main sections, but these comprise a fore section in titanium (red gold/titanium for HM4 RT), which includes the dials and articulated front lugs; a central section in sapphire offering unprecedented 360° access to the superbly finished engine; and an aft section tapering down to the dual crowns and framing the animated balance, which is supported by an aerodynamic cock. Methods borrowed from aeronautic engineering are visible in the externally mounted screws, which provide both rigidity and watch resistance to hold the case’s three sections solidly and elegantly together.

Beginning with a solid piece of sapphire, more than 185 hours of intricate machining and meticulous polishing are required to turn an opaque block of crystal into the clear, light-filled atrium of the central case section, which reveals part of the HM4 engine and engineering details. The metal case sections are milled from solid blocks of high-tech grade 5 titanium (red gold for HM4 RT), which undergoes hundreds of hours of machining before polishing, masking and finally satin-finishing of the surfaces. The results speak for themselves.

The contrasts of matte with highly polished surfaces, metal with sapphire, straight lines with seductive curves and rigid forms with articulated arms endows Horological Machine No4 with a life and vibrancy that sets it apart from anything that has ever gone before.

HM4 is the quintessential machine as three-dimensional kinetic art. 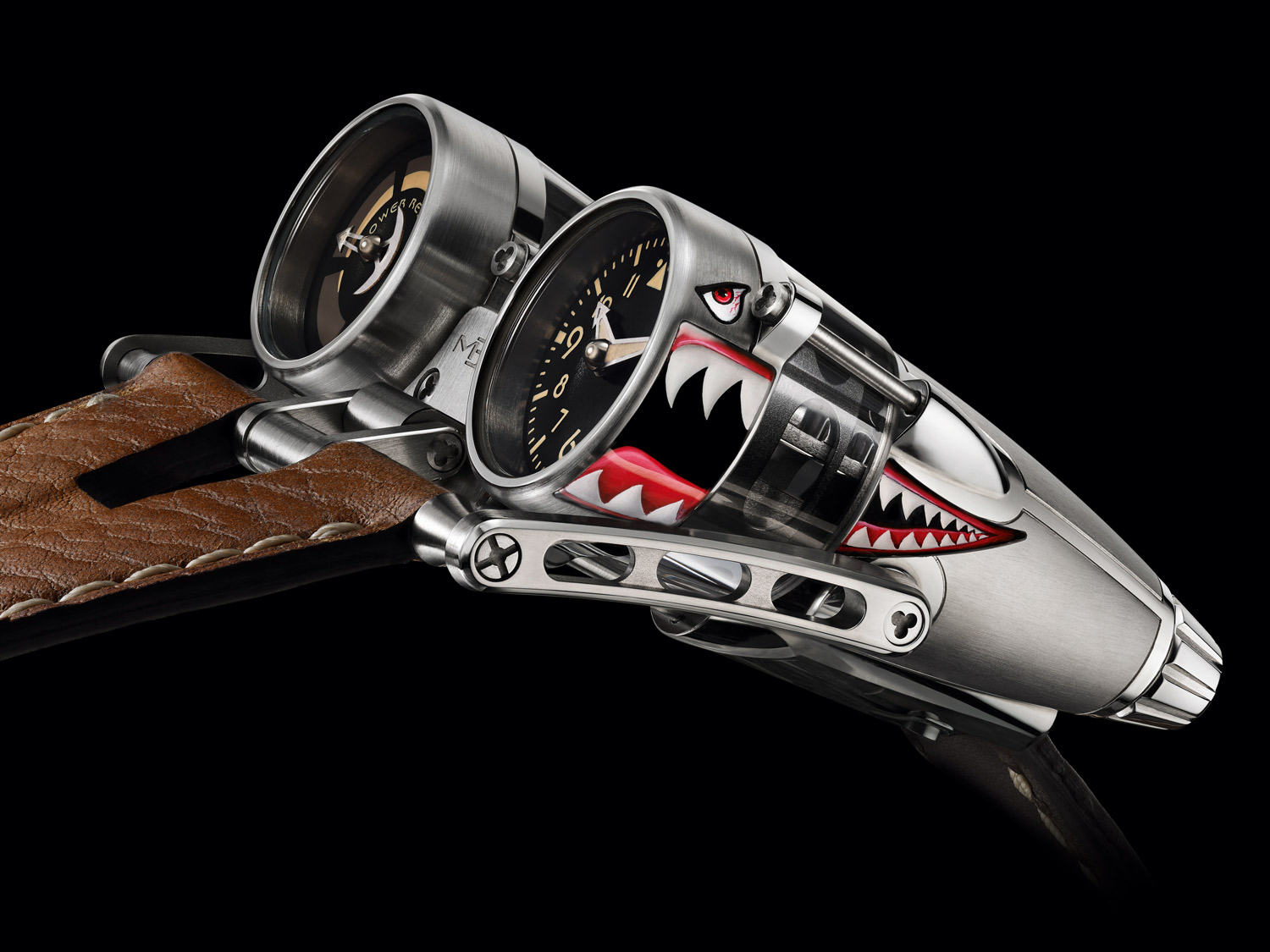 ‘Friends’ responsible for the HM4 Series

Hand-finishing of movement components: Jacques-Adrien Rochat and Denis Garcia of

MB&F – The Genesis of a Concept Laboratory 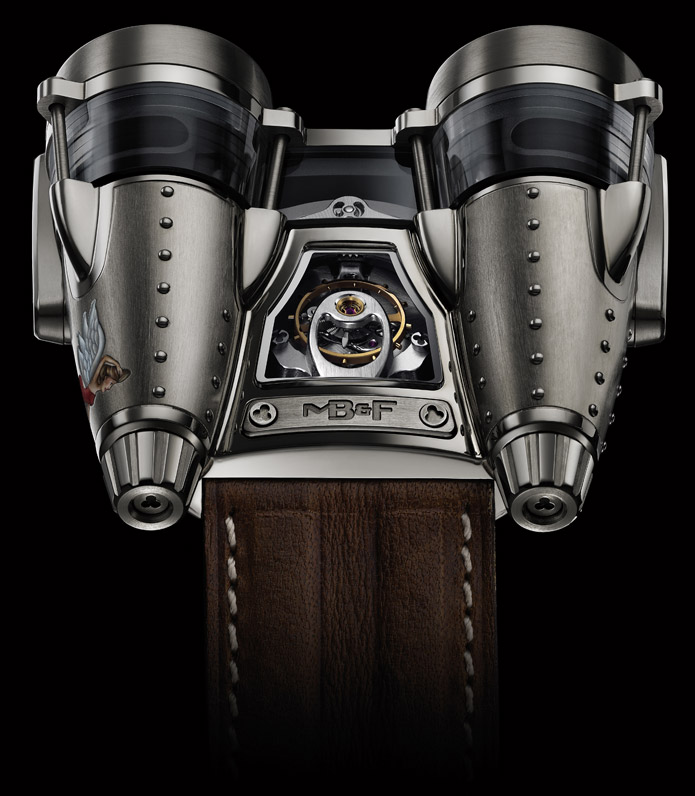 The projects that gave Maximilian Büsser the most pleasure and personal satisfaction during his fifteen years managing prestigious watch brands were those working with talented independent watchmakers. An idea for his own personal utopia emerged: that of creating a company dedicated solely to designing and crafting small series of radical concept watches in collaboration with talented professionals he both respected and enjoyed working with. The entrepreneur in Büsser brought the idea to reality.

MB&F is not a watch brand, it is an artistic and micro-engineering concept laboratory in which collectives of independent horological professionals are assembled each year to design and craft radical Horological Machines. Respecting tradition without being shackled by it enables MB&F to act as a catalyst in fusing traditional, high-quality watchmaking with cutting-edge technology and avant-garde three-dimensional sculpture.

MB&F’s first timepiece, Horological Machine No1 (HM1) was delivered from 2007 and introduced the concept of three-dimensional architectural horology. This was followed by HM2 in 2008 and HM3 in 2009, which were both inspired by science fiction. The year 2010 heralded the HM4 Thunderbolt, considered by many to be MB&F’s most audacious machine to date. Legacy Machine No1 introduced a new traditionally inspired line in 2011, while the 1970’s inspired HM5 On the Road Again was launched in 2012. 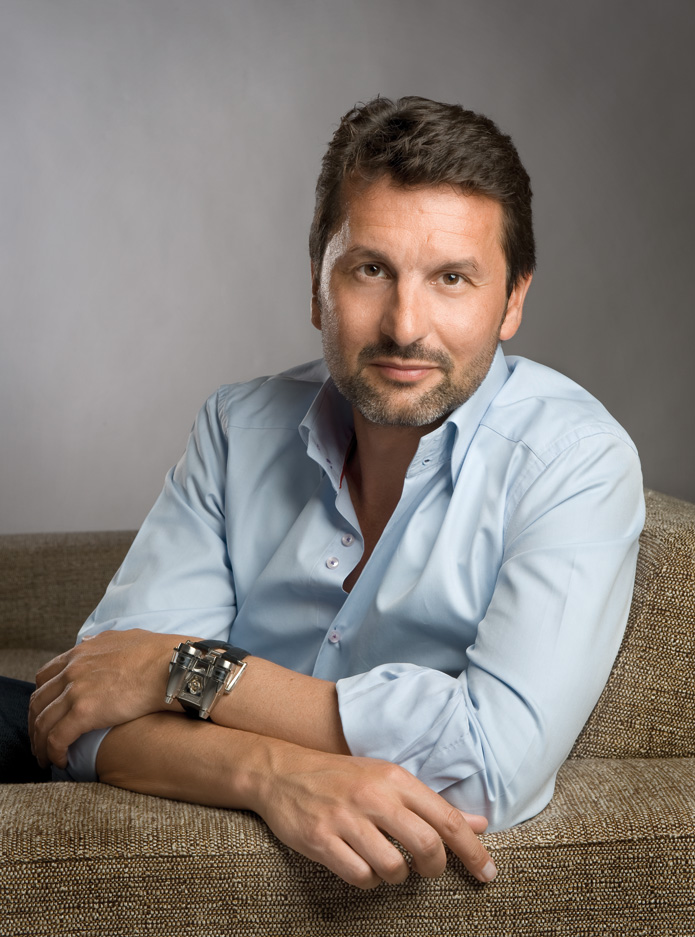 Maximilian Büsser was born in Milan, Italy, before moving at an early age to Lausanne, Switzerland where he spent his youth. Growing up in a multi-cultural environment and family – his father was a Swiss diplomat who met his mother, an Indian national, in Bombay – led Büsser to develop a cross-cultural, broad-based approach to life and to business.

In July 2005, at the age of 38, Büsser created the world’s first horological concept brand: MB&F (Maximilian Büsser & Friends), in which he is now partnered with Serge Kriknoff. Büsser’s dream with MB&F is to have his own brand dedicated to developing radical horological concepts by working in small, hyper-creative groups composed of people he enjoys working with.

Entrepreneurship is Maximilian Büsser’s forte. In 1998, when only 31, he was appointed Managing Director of Harry Winston Rare Timepieces in Geneva. During his seven years there Büsser developed the company into a fully-fledged and well respected haute horlogerie brand by developing the strategy, products, marketing and worldwide distribution, whilst integrating design, R&D and manufacturing in-house. The results were a 900 per cent increase in turnover and the positioning of Harry Winston as one of the leaders in this very competitive segment.

Maximilian Büsser’s love for high-end horology was nurtured by his first employer, Jaeger-LeCoultre. During his seven years in the senior management team during the 1990s, JLC strongly increased its profile and multiplied its turnover by a factor of ten. Büsser’s responsibilities at Jaeger-LeCoultre ranged from Product Management & Development to Sales & Marketing for Europe.

Büsser graduated in 1991 with a Masters in Microtechnology Engineering from the Swiss Federal Institute of Technology, Lausanne.