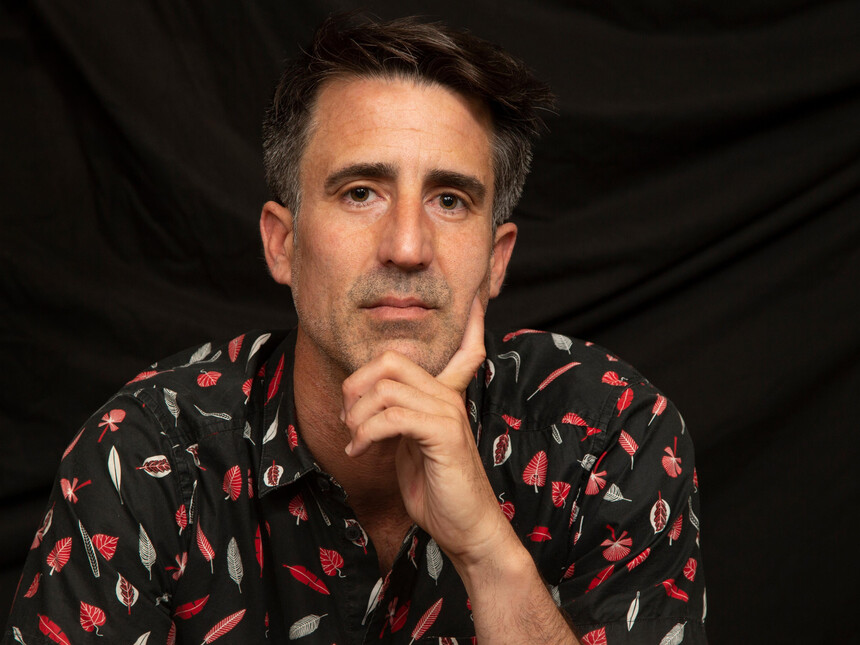 California-based author Jose Antonio Villarán was born and raised in Lima, Peru. Jose and his siblings grew up speaking English and celebrating Peruvian, Mexican, and American holidays. Jose’s parents met each other while attending university in Texas. His father is Peruvian, and his mother is American-Mexican. Two of his siblings were born in the States, and he and his sister were born in Peru. He has lived his life equally in both countries. Jose says, “I exist somewhere in the liminal space between these two countries. I’m something other.” Jose earned his Bachelor’s Degree in Creative Writing from San Francisco State University, a Master’s of Fine Art in Writing from the University of California San Diego, and recently a Doctorate in Literature with a Designated Emphasis in Critical Race and Ethnic Studies from the University of California in Santa Cruz.

Jose’s Antonio Villarán’s book of poetry, Open Pit, reveals the hard truths about open-pit copper mining and its toll on the inhabitants of Morococha and its environment. Jose’s poetry gives a voice to the people of Morococha. Open Pit is to be read by actants representing the body of the open pit, the capital, the people, the government, an extra-human, and the parent-writer. Redacted names are to protect individuals from repercussions since many worked for Chinalco (Aluminum Corp of China). The redactions Jose finds add a sculptural quality to his poetry. Doubling up on the letters of some of the words adds a lyrical quality to the text. I could see it performed as a contemporary opera of sorts. Jose weaves in autobiographical aspects of his life and his love for his son.

Morococha is located in Yauli, in the department of Junín, Peru. It is a challenging drive from Lima through the Andes as one makes their way through the mountainous region to a high altitude of 4,540 meters. The remote location is notable since it may contribute to the lack of awareness of the conditions miners and inhabitants of Morococha endure. In a few years, the open pit will likely reach the village.

They were obliged to move to New Morococha without consent. It is a terrible situation since they are economically dependent on mining. When they protested, they were penalized with the closure of schools and health services.

I hope that you will read Open Pit. It is an eye-opener I can no longer see the everyday appliances I have taken for granted the same way again from the ever-efficient household appliances to computers and mobile phones. I hope you will be at least grateful to all the laborers who contribute immensely to our expected convenient way of life. However, we must keep in mind the Earth has limited resources and the non-stop extraction of them cannot go on indefinitely.

Jose’s Spanish Version of Open Pit will publish in June 2023 by Album del Universo Bakterial. Jose will return to Morococha to present his book, and he aims to gift a minimum of seventy-five copies to the event’s attendees.

I met Jose at the launch of his book this past May in New York, and later I followed up with him via Zoom.

Why is copper needed in the industry? Can we do without it?

The use of copper is crucial in the construction, equipment manufacturing, and transportation industries, making it one of the most sought minerals worldwide. Furthermore, billions of electronic devices rely on copper to function properly, hence it would be complex to imagine a way to replace copper in the short term.

What’s our responsibility in all of this?

This is perhaps one of the most important questions that folks living in the industrialized parts of the world can ask themselves: what’s my responsibility in all of this? How am I, as a global citizen-consumer, implicated in the climate-related disasters happening everywhere? How is my way of life also generating an untenable future for life on this planet?

How does open pit mining affect the environment?

Open pit is the most common mining method used throughout the world. It does not require underground tunnels, because the minerals are extracted from a huge open pit (hole) in the ground. From an environmental point of view, open pit mining is extremely harmful. It permanently alters landscapes and destroys habitats, requires huge amounts of water, and air pollution is much worse.

How is racism a part of the mining problem?

Extractive violence is racial violence. I believe this to be an observable fact. The location of extractive projects around the world affects indigenous, black, brown, and low-income folks disproportionately. In Peru at least, as in other parts of Latin America, the state doesn’t seem to serve marginalized communities in the same manner as it does its more privileged citizens. The government of Peru would’ve never declared a state of emergency and closed schools in San Isidro or Miraflores for example, two of the most affluent and white districts in Lima.

Why should people care about Morococha?

Because we’re all implicated in the story of Morococha. Every single person is implicated when it comes to large-scale environmental decisions because we live on the same planet. Do you own a laptop or a tablet or a smartphone? Do you live in a city or a town with an electrical grid? Do you use cars or trains or airplanes? Then you’re implicated. What happens in Morococha affects you, it’s just hard to realize this because the violence is happening so far away. It’s elusive and distant, but it’s happening.

What are you working on now?

I’m interested in exploring my family’s intergenerational migratory movements against the backdrop of broader historical events, such as the Mexican Revolution and Obama’s presidency.