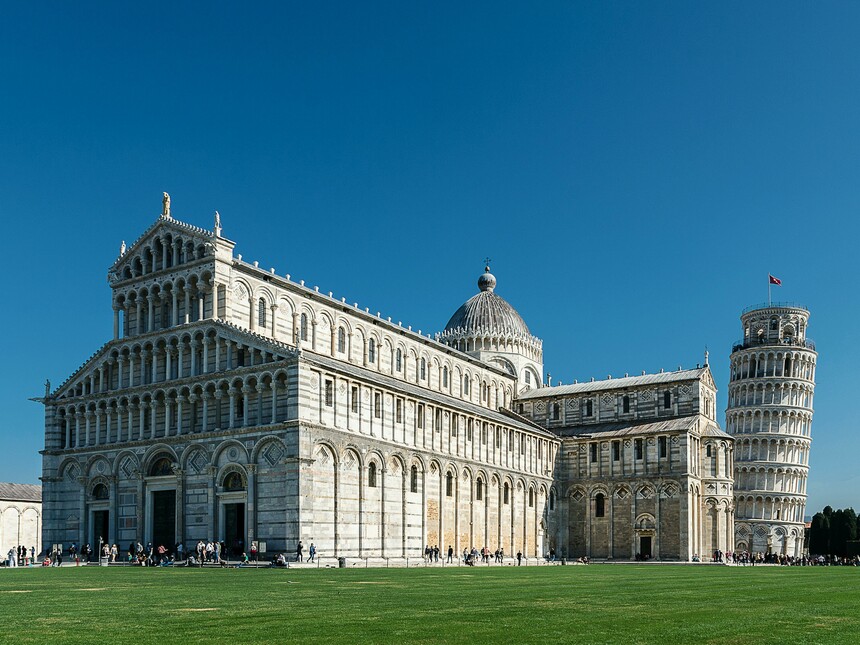 You might believe the Tower of Pisa is famous because it’s leaning.

The slope provokes seductive chills, that’s for sure, and we are attracted by the mostrum. But some believe that straight, the Tower of Pisa would be equally famous. It was built by medieval masters with unprecedented knowledge, and perhaps determined to arouse admiration, it’s a sensational building erected in a city with international customs.

“We don’t want to go back to talking about the Tower – reassures humorously Monica Baldassarri, professor at the School of Specialization of Archaeological Heritage of the University of Genoa and director of the Civic Museum of Montopoli Valdarno – but just thinking about something like allows us to imagine the cluster of experimentation and ideas of the time in Pisa and the importance of the architects. The architects were what we call today “archistars”, or maybe more, and they measured themselves with a complex construction – not only as circular – but because the ground is soft and they knew its characteristics very well, so much so that they designed the basin at the base of the bell tower as a ‘donut’. I also dug the foundations of the Pisan tower-houses and saw that they were made to become continuous and discharge the forces, with free arches filled with wood to lighten them “.

According to the professor, these particular traits are three: cosmopolitanism, color and Romanitas (other aspects, such as the use of the bestiary, are common to other Romanesque styles). She tells us about them and, that the formula is a winner with her students, and she recommends venturing into the visit with the attitude of someone taking part in a treasure hunt.

Shall we start with a look beyond the borders?

Pisan Romanesque is a more cosmopolitan style compared to others. The decorations with polychrome marble lozenges and geometric motifs are clearly of Islamic origin and also the ceramic bowls placed between the blind arches come from both the Spanish and North African Islamic areas, less from the Middle Eastern and Byzantine. It’s not just a Pisan phenomenon, but Pisa used it extensively and before than elsewhere.

You can really recall the Mediterranean and beyond, that’s why I speak of cosmopolitanism. We would not expect artistic influences from different religions in the Romanesque Catholic Church because we are used to interpreting everything from the mind of those born and lived after the Tridentine Council and the cultural closure of the world. Instead, at the time, the aspects intersected and, despite the Crusades, there was a great opening in terms of knowledge. We Pisans often speak about this, but nobody probably knows it outside of here.

On the facade of San Paolo in Ripa d’Arno there is a Byzantine Madonna on one side sided by Romanesque arches and on the other side, a Romanesque Madonna sided by pointed arches in Islamic style.

What about the color?

The polychrome lozenges and the metallic luster green ceramic basins and in blue, are a sign of the fact that the Middle Ages were colorful, much more colorful than one imagines, especially after the year 1000. The churches were especially colorful, mostly because they had to touch the poor people who lived in the dark but when they went outside to pray, they were able to see a sparkled golden glow and color, in spite of the churches being only lit with torches and lamps. And on the outside, in addition to lozenges and basins, the restorations revealed that there were painted plasters which were then removed (for this reason we had the idea of a gloomy Middle Ages, with severe constructions as a symbol of the poverty of the Church). The traces of painted plaster are difficult to spot, while the ceramic basins and the lozenges are clearly visible: just look up.

The other aspect, perhaps more obvious, is the reference to Rome which is very evident in Pisa and is also found in the area. Re-purposed capitals were brought from Rome, thanks to the functioning Porto Pisano. Other than the capitals, which may now seem similar to the others but were probably well refined at the time, there are some architectural forms and Roman epigraphs in the masonry. Moreover, when the Municipality of Pisa had to invent its own seal because it felt like a state, it chose an eagle resting on a capital. Not a German eagle: a Roman eagle. Pisa wanted to be the new Rome. The German emperors, in turn, took the eagle.

What are the spots that need to be seen?

Islamic hints can be found in all the churches in the city, but also near the sea in the beautiful church of San Piero in Grado which is very interesting because, among other things, is the one closest to the coast. St. Peter is believed to have celebrated his first mass there as soon as he arrived on Italian soil. It is the only Romanesque church in the Pisan area that basically does not have a facade: on one side it has three apses and on the other side has an apse rebuilt after its destruction and a small door on the side. There are different explanations for this.

The last one I heard seems excessive to me: the manufacturers would have referred to the German models because Pisa is a Ghibelline city. Pisa was Ghibelline because it suited the city politically, but from the cultural and artistic point of view, all this did not have such an influence as to justify German inspiration on such an important basilica for the Pisans, one of most ancient as revealed by the excavations, and the closest one to the port. In my opinion, there are other reasons, perhaps even more trivial, or maybe statical.

However, San Piero in Grado has very beautiful basins which, moreover, stand out on the lawn that surrounds it and inside it still has a medieval decorative apparatus, including interesting fourteenth-century frescoes, without the Baroque transformations that are found elsewhere.

The use of polychrome lozenges and two-color attempts can also be found when going to the Monte Pisano area: the Pieve di Calci is splendid. Taking a path along Monte Pisano you will cross both the parish churches and the chapels, such as that of San Martino al Bagno, in Uliveto, which are pretty and almost act as pointers to an itinerary between the countryside and the important churches and from there you can get to Vicopisano where there are the re-purposed capitals.

Less rich and less cosmopolitan is the Romanesque in the Volterra area. The style in the Pisan Mountains, towards the coast and up to a certain point in the Valdarno, Cascina, San Casciano is very similar to that of the city, but in Val di Cecina, Valdera, in Montopoli, in the area between San Miniato it’s more hybrid and blends with the Romanesque elements of Lucca. These are cultural border areas. However, the ceramic basins can be found again in the church of Santa Maria Novella in Montopoli. The portal of the cathedral of Volterra has a small arch with polychrome decorations but it is, in fact, the cathedral.

The decorative apparatus is reduced to a minimum, it’s more severe except in really important churches. Everything is a little yellowish in the Volterra Romanesque, but it suits the badlands, and its peculiarity is that of being immersed in a wonderful landscape: the churches not far from the inhabited areas are fascinating, bare, and fit to the idea of the Middle Ages that we have.

The paradox is that the parish church of San Piero in Grado and the church of San Casciano (which has the architrave decorated by Biduino), are both richer than the cathedral of Volterra. Among other things, in the Volterrano they use a local stone that is more damageable while in Pisa they use limestone, sandstone, and tuff. Pisa and Volterra were very different cities, even in terms of cultural contacts and this is reflected in the artists and workers. It is significant when comparing tower-houses: in Volterra, they are completely closed, in Pisa, they soon become wider, freer with large arches, more “airy”, with pointed arches that were present very early, already in the 12th century.

In short, in Pisa “they saw things”…

In Siena, Florence and Umbria there are remarkable Romanesque churches, but this Romanesque, which is so forward and at times seems almost “non-Romanesque”, is in Pisa and its surroundings. Maybe in Genoa, in certain contexts. Another peculiarity of the cosmopolitanism of Pisa is that there are circular churches inspired by the Holy Sepulcher: the chapel of Sant’Agata and San Sepolcro where there was also an order of hospitallers with a bishop who became the first patriarch of Jerusalem.

Do not forget the loggia churches, not seen elsewhere: the one dedicated to SS. Felice and Regolo is in the heart of the old town. When it is said that haggling was done in the church, one imagines that it was done in the churchyard, but in this case, there was precise loggia where you could haggle above the church. It is believed that some churches in the area were originally made like this.

Back to the decorative bowls placed on churches, were you going to add something?

Yes, they were the same ones that the Pisans used to set the table. They are so beautiful and colorful that when they started to be imported they first conquered the aristocrats, but then, in the middle of the 12th century, we can find them in artisans’ shops and everywhere. The houses were also lively, the Mediterranean was on the table. Until the beginning of the thirteenth century, we did not yet know how to make colored ceramics: it is a technique that is imported to Pisa from the Islamic world to Genoa and Venice from the Byzantine world, in two slightly different ways, but I don’t want to lecture you.

Not that it would harm…

We have to restate the discourse on color and on these bowls that were not produced by us. When the Pisans went to the Mediterranean saw these objects, and loved them in the second half of the 1100s then, after the Crusades they literally explode. In the early 1200s, they decided to make them themselves and probably called them Islamic potters. The assumption is that the first majolica was made in Pisa, archaic majolica that has characteristics similar to that of the Balearic Islands. Do you know, I always ask, where does the name majolica come from? And they all say no. From Mallorca!

Why NFTs Are the Next Mega Segment in Luxury | Jing Daily

Yilan Hua & the Rise of the Chinese Supermodel | Jing Daily