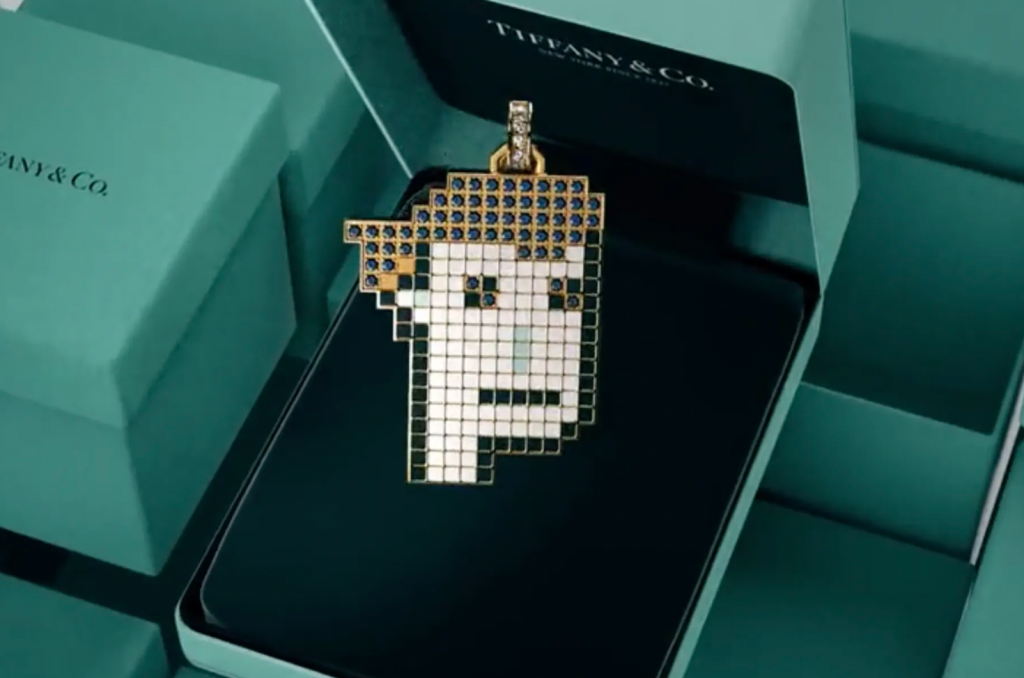 What Happened: After months of teasing, luxury jewelry giant Tiffany & Co. has officially entered the metaverse with a limited-edition run of Cryptopunk-inspired pendants, available only to those who are part of this exclusive, small-scale NFT community. Between August 5-12, the “NFTiff” launch will see the house release 250 NFTs. When purchased, these allow holders of CryptoPunk NFT PFPs (non-fungible profile pictures) to transform their own CryptoPunk into a custom-designed physical counterpart. Executive Vice President Alexandre Arnault commemorated the announcement with a few simple words: a tweet, stating, “Looks like we listened to the community.”

The Jing Take: The news hails an exciting time for jewelry and crypto aficionados, as it marks the brand’s inaugural foray into the virtual space. In April, Arnault hinted at the possibility of Tiffany & Co.’s digital metamorphosis after converting his own CryptoPunk token into a physical emblem crafted from sapphire, rubies, and yellow diamonds. After turning heads across the CryptoPunk community with his rose gold-plated piece, Arnault took to Twitter to ask the question: “Shall we custom make @TiffanyAndCo CryptoPunk pendants available for CryptoPunk owners to order for 1 week?” After the poll was met with an impressive 80 percent “yes,” Arnault’s idea has finally come to fruition.

Holders of the CryptoPunk PFP’s will be given the chance to transform their NFTs into a Tiffany pendant featuring at least 30 diamonds or gemstones. Photo: Tiffany & Co.

But not everyone’s convinced. When legacy companies like Tiffany enter the market, they have a reputation to uphold — and the jeweler’s latest move hasn’t exactly been met with gleaming feedback from either the Web2 or Web3 community. Users have taken to social media to voice their outrage at the price of the pendant at 30ETH (over $50,000, or 338,000 RMB), as well as the intention behind it. Some have stated that the initiative is “tone deaf,” while others have suggested that the brand should restrategize its digital roadmap to one that’s more sustainable and realistic for consumers. “When you order Homer on Shein,” one account (@magic___micah) commented, implying that the line has imitated a design similar to that of the independent American luxury outfit owned by Frank Ocean. Another remark (from @ladicius) reads, “how the mighty have fallen.”

However, for luxury giants like Tiffany, it’s plausible that they’re banking on the fact that there will be someone willing to pay the price, however extortionate it may be. The fact that the NFT comes with its own unique physical counterpart will amplify its appeal. Moreover, CryptoPunk holders are known for wanting to signal their status and display their position as part of one of the crypto space’s most exclusive coteries. Tiffany’s move is a clever way of offering luxury to an online group through recognizable emblems that can be worn in the physical world.

The overlap of top players in both crypto and luxury fashion doesn’t always equate to total success; this has become resoundingly evident through Tiffany’s new move — which, if nothing else, has sharply divided opinion. But just how necessary is it for high-end labels like Tiffany to produce campaigns that cater to the masses, which clearly wasn’t what this drop was trying to achieve?

When it comes to the metaverse, projects like this defeat what many consider to be the point of Web3 in the first place: an accessible — even utopian — new landscape. The curation of exclusive, closed-off communities is incompatible with this ideal. With that in mind, perhaps a roadmap rethink really is necessary.

Sportswear Meets Luxury with the Adidas for Prada Re-Nylon Collaboration

Pandora Wants to Triple Its Revenue in China. Will It Succeed? | Jing Daily

What to Order at Fiamma, Chef Mauro Colagreco’s First Italian Restaurant in Singapore