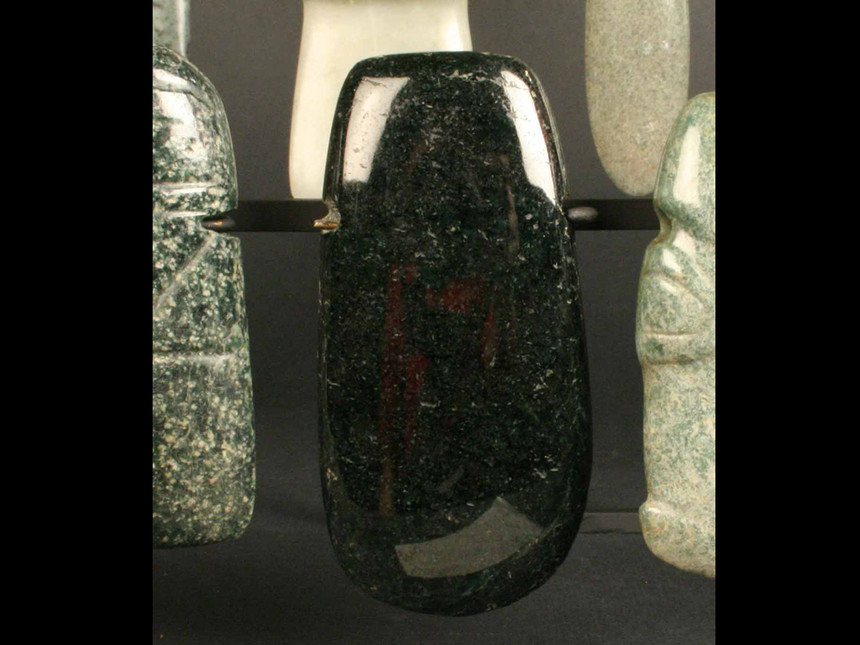 The word “jade” is used for jadeite, nephrite and other similar semiprecious stones. Although the objects carved in jade come from many places, outcrops of this stone have only been found on Mexico’s west coast and in southern Guatemala. The sheets were cut in a straight line with a sand abrasive perforated with hard cane drills or bird bones and carved with sharp stones. They were polished with beeswax, with an already polished piece of jade or with pieces of bamboo.

Jade was very much appreciated and heavily traded from 1000 BC up to the arrival of the Spaniards, but its more exact significance is unknown. Apparently, it was a sacred substance mainly associated with water. It was also related to wealth. In fact, the necklace beads carved in this material were also used as money.

In general, jade was used to make jewelry and other clothing accessories, even for decorating teeth. It was probably not used only by the aristocracy, but its abundant presence in rich offerings suggests that it was concentrated in the hands of the elite.

The Drop: All the Hottest Fashion Launches in January 2022

Are Japanese Wines Worth It?

Mr. Pascal Raffy, Owner of Maison BOVET 1822, honored with “Lifetime Achievement Award” for his visionary contribution to fine Swiss Watchmaking, during the Watch & Jewellery of the Year 2019, in Dubai