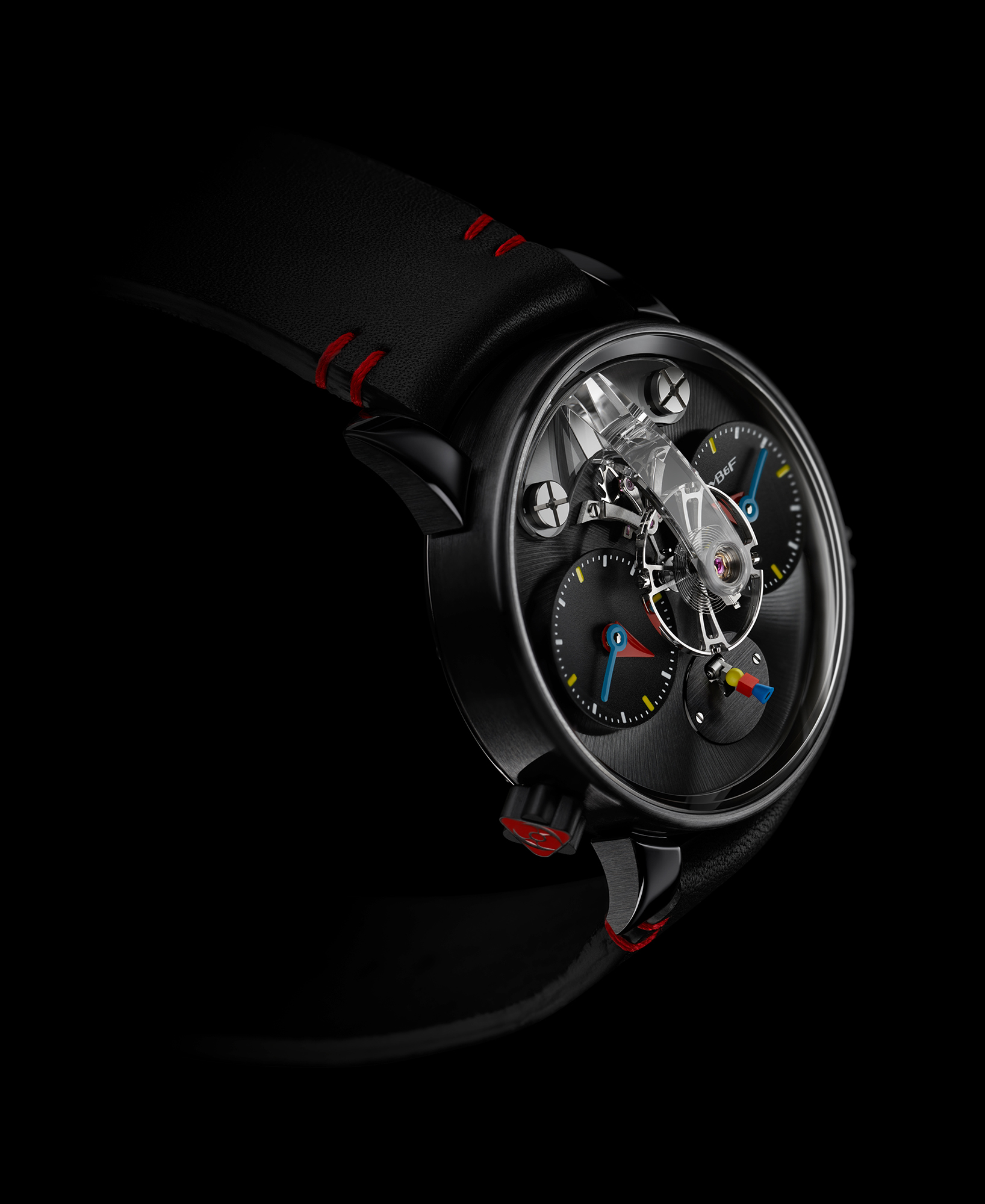 Engraved in French on the case band between the lugs of LM1 Silberstein is a paraphrased quote from Gustave Flaubert: “Le vrai bonheur est d’avoir sa passion pour métier” – which translates roughly as, “Making a profession of your passion is true happiness”.

In 2009, MB&F had called on Silberstein to create its very first piece of ‘Performance Art’ – reinterpretations by external artists and designers of existing MB&F Machines. The result was the HM2.2 ‘Black Box’, followed by a long list of collaborations with other creators. For this new Performance Art series, Silberstein has taken MB&F’s classic Legacy Machine N°1 and imbued it with his unique flair for the unconventional. His use of his signature three bright colours and shapes: red, blue and yellow; triangle, rectangle and circle for the hands and dial markers; and three-dimensionally translated as a cone, cube and sphere for the power reserve, catch the eye as they contrast against the more subdued movement plate below.

However, it is the concave curve of the subdials that highlights the artist’s philosophical approach most. While the convex sapphire crystal dome and balance bridge offer protection from outside forces, the concave subdials attract and welcome the “eternal time” of the universe into the movement, where it is transformed and displayed as two completely independent time zones. Naturally, the hands are similarly concave so that they seamlessly complement the curvature of the dials.

“I resonated with LM1 because by highlighting the balance – the mechanism that splits time into miniscule increments – it highlights how man converts eternal time into something he can use”, Silberstein explains.

Silberstein felt strongly that, as the balance is the “beating heart” of the timepiece, nothing should break the view of the dial side regulator or block “eternal time” from reaching the time indications. He also thought that as graceful as the dual arcing bridges of the original LM1 were, they took too much visual attention from the indications. Two years of development were required to create the transparent sapphire crystal balance bridge to the incredibly tight tolerances required to support the balance wheel. And all of that work for an elegantly shaped component that is essentially designed to be invisible. “It was a pleasure to work from such a creative timepiece as LM1 because the suspended balance and arched bridge made it feel like working on the set of a science fiction film”.

Inspiration and realization: Alain Silberstein had one overriding aim in his vision of creating a ‘Performance Art’ edition of LM1: to welcome the “eternal time” of the universe into the movement, where it would be transformed into time on a more human scale. To realise this, he envisaged concave subdials to catch “eternal time”, rather than the convex subdials of the original LM1. He also envisaged replacing the original dual arches of LM1’s balance bridge with a single, transparent bridge, allowing full visual access to the time indications and dial-side escapement. The colours and shapes of the concave hands highlight Silberstein’s meticulously practical approach to artistic design. When reading the time, the hour is generally the first bit of information required. So the hour hands are a brighter colour (red) on a larger surface area (triangle) than the thinner blue minute hands.

The six-pointed crowns (comprising two overlapping triangles) also reinforce the collaborative aspect of this Performance Art piece: the shapes and colours of the crown are pure Silberstein, while the battle-axe logo represents MB&F.

Silberstein uses contrast and materials to surreptitiously guide the eye to key elements on the dial: the hands are both brightly coloured and high gloss, while the underlying dials and movement plates feature more subdued colours with matte finishes.

“I like playing with materials and finishes. The more matte there is, the more the high polish pops”.

Engine: LM1’s ingenious three-dimensional movement was specifically developed for MB&F from Maximilian Büsser’s sketches by Jean-François Mojon and his team at Chronode together with independent watchmaker Kari Voutilainen. The balance wheel and spring at the very heart of any mechanical watch movement are responsible for regulating timekeeping accuracy. Büsser has long been fascinated by the large slowly oscillating balance wheels of antique pocket watches –18,000 bph compared with the 28,800 bph common today – so it was no surprise this was the starting point from which to let his fertile imagination roam free. What was surprising, though, is just how radically he re-interpreted tradition by relocating the balance wheel from its more usual position hidden at the back of the movement to not just the top of the movement, but floating above the dials!

While the location of Legacy Machine N°1’s regulating organ may be considered avant-garde, ‘tradition’ is upheld by the large 14mm diameter balance wheel with regulating screws specifically developed for MB&F, balance spring with Breguet overcoil, and mobile stud holder.

Another very special feature of the LM1 movement is the ability to set the two time zones completely independently. The vast majority of dual time zone movements only allow the hours to be independently adjusted, a rare few offer setting to the half hour. Legacy Machine N°1 allows both hours and minutes of each dial to be set to whatever time the user wishes.

The world’s first vertical power reserve indicator on LM1 is driven by an ultra-flat differential with ceramic bearings allowing for a slimmer complication and a more robust and longer-wearing mechanism.

Dial and indications: The rate keeping of the twin dials is controlled by the same regulator (balance and escapement) so that once set, the two times stay perfectly synchronised with each other. Both the hours AND minutes on both dials can be set to any time desired via their respective crowns.

Complementing the three-dimensionality of the balance floating in space, the dual concave dials with their brightly coloured hands float above the top of the movement. To ensure aesthetic purity of the dials, a sophisticated fixation system underneath negates the necessity of visually obtrusive screws.

Fine finishing and historical legitimacy: Acclaimed master watchmaker Kari Voutilainen assumed responsibility for ensuring the historical accuracy of the style and finishing of the Legacy Machine N°1 movement. No easy task with such an unconventional suspended-balance design from which to begin.

On the back of the movement, oversized ruby jewels set in highly-polished countersunk gold chatons provide striking visual counterpoints to the frosted, sensually curved bridges. While providing historical links with the large jewels seen in high-grade antique pocket watch movements, the ruby bearings have a practical application in reducing wear and increasing longevity by accommodating large diameter pinions and holding more lubricating oil. Alain Silberstein was born in 1950 in Paris, France. After graduating with a diploma in interior architecture and model making, he worked first as an interior designer in Paris, then continued in that field after moving to Besançon in 1979 − the centre of France’s watchmaking industry. Silberstein fell in love with watchmaking and in 1990 founded his own brand, Alain Silberstein Créations, which ceased operations in 2012.

While interior design and designing watches share quite a few commonalities including the harmonious juxtaposition of colours and textures, the scale is quite different: Silberstein replaced working in metres with working in microns.

“In all my creations I search for the radical, which is finding the very essence of what should be highlighted”.

Silberstein’s watches are known for the signature use of three bright primary colours (red, blue, and yellow); three simple geometric shapes (triangle, square/rectangle, and circle or in three dimensions pyramid, cube, and sphere); and sophisticated juxtaposition of materials and finishes.

Silberstein was the first to create a watch with a sapphire crystal case, and he was a pioneer in making haute horlogerie playful with his use of bright colours and non-traditional materials.

“Colour is important, but you have to always keep in mind that you cannot disassociate colour from the material. Finishes can also convey a sense of colour”.

Silberstein now works as an independent watch designer. He is a long time Friend of MB&F, having first collaborated on the Bauhaus-inspired HM2.2 Black Box Performance Art piece in 2009.

In 2015, MB&F celebrated its 10th anniversary – and what a decade it has been for the world’s first ever horological concept laboratory: 10 years of hyper-creativity; 11 remarkable calibres forming the base of the critically acclaimed Horological Machines and Legacy Machines for which MB&F has become renowned.

As well as Horological and Legacy Machines, MB&F has created space age Music Machines (1, 2 and 3) in collaboration with Reuge; unusual clocks in the form of a space station (Starfleet Machine) and a spider (Arachnophobia); as well as two robot clocks (Melchior and Sherman).

And there have been distinguished accolades reminding us of the innovative nature of MB&F’s journey so far. To name a few, at the Grand Prix d’Horlogerie de Genève in 2012, MB&F was awarded the Public Prize (voted for by horology fans) and the Best Men’s Watch Prize (voted for by the professional jury) for Legacy Machine No.1. At the 2010 Grand Prix d’Horlogerie de Genève, MB&F won Best Concept and Design Watch for the HM4 Thunderbolt. In 2015 MB&F received a Red Dot: Best of the Best award – the top prize at the international Red Dot Awards – for the HM6 Space Pirate.

A Food Lover’s Guide to Paris This Summer 2022

Why we need spiritual ecology