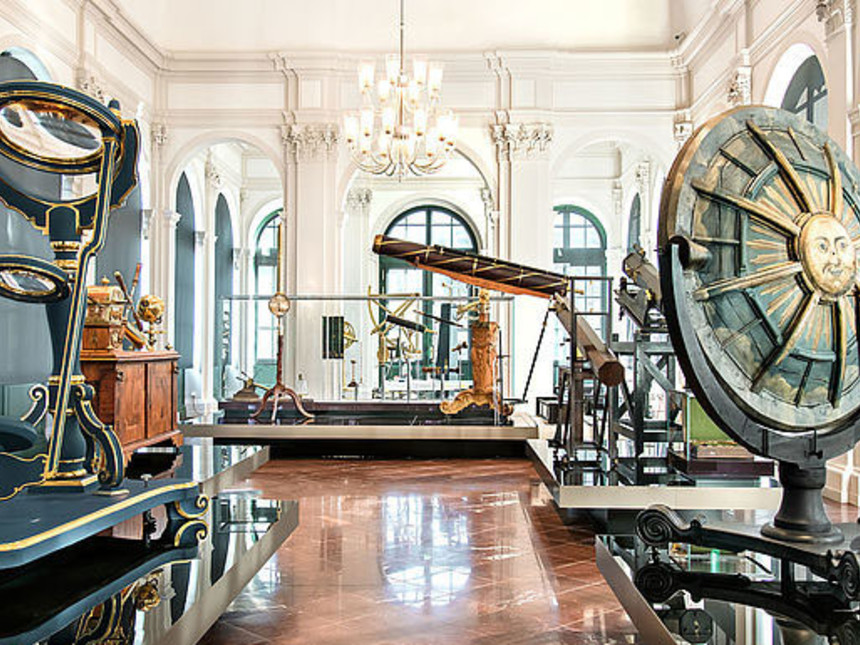 Today’s permanent exhibition in the Zwinger shines a spotlight on objects that show how we began to understand our world: The development of the clock – from the early modern period to its production in the manufactory in Glashütte, Saxony, in the nineteenth century – is presented next to a celestial globe from the late thirteenth century, one of only five known globes from this period, created in today’s Iran. The calculating machine developed by the French mathematician and philosopher Blaise Pascal can be tried out by visitors as a 3D model, and elaborate digital animation allows for a glimpse of the inner life of many objects: for example, the drumming bear of 1625, who sports real fur and a clock-face on his chest. As long as the clock ticks, the bear’s eyes roll back and forth.

The Langgalerie, which extends from the Kronentor to the central pavilion, now houses the display on mechanical marvels and mathematical instruments from around 1600. This part of the exhibition reveals how the collection originated in the 16th-century Kunstkammer, or ‘chamber of the arts,’ of the Electors of Saxony, which was housed within the Palace at their court seat in Dresden. It explores the Electors’ intensive engagement with questions relating to measurement, surveying, and astronomy, and their enthusiasm for elaborate mechanical devices.

In the newly-created exhibition space within the Zwinger ramparts an array of terrestrial and celestial globes are on display from the Salon’s world-famous collection. The oldest exhibit on show here is an Islamic celestial globe dating from the 13th century. For the first time, these fragile artifacts will be able to be presented completely protected from the harmful effects of daylight.

The pavilion’s upper floor, the grand Festsaal, is dedicated to the history of the Salon within the Zwinger itself. Until 1945 this room housed the Salon’s entire holdings. Visitors can retrace the original idea and motives that lay behind installing a cabinet of physical instruments here in the mid-18th century. It is here that the official local time for Dresden was determined over period of 150 years and that the first systematic meteorological measurements of the region were made.

The history of clocks, watches and automata since the Renaissance is re-told in the dramatically curving Bogengalerie. A highpoint of this part of the exhibition centers on the origins of precision watchmaking in the Saxon town of Glashütte, which the Mathematisch-Physikalischer Salon helped to found. It was here that Ferdinand Adolf Lange came up with the idea of becoming a watchmaker.