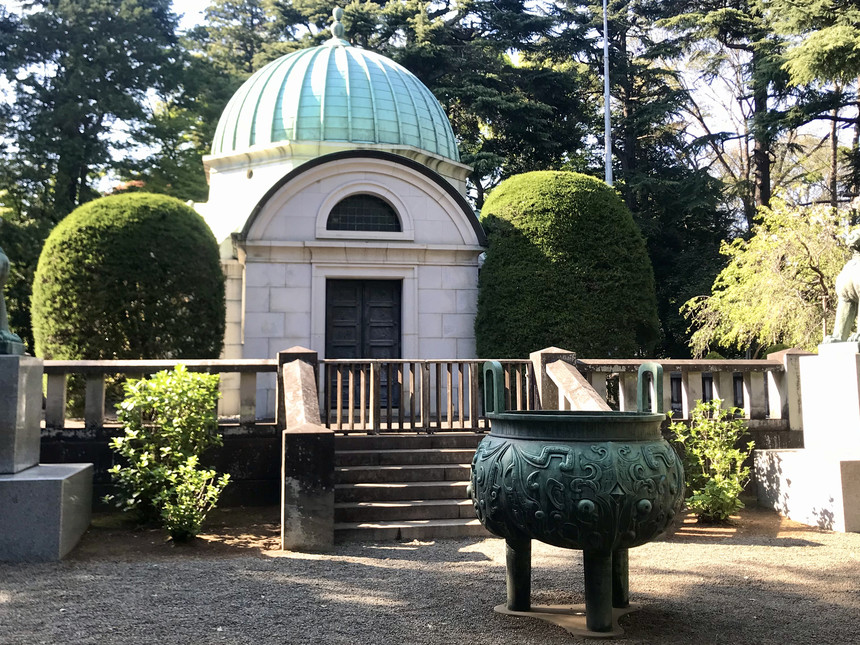 What is pertinent is the calmness of beauty, its sense of restraint. It is as though the land knows of its own beauty, its own greatness, and feels no need to shout it.

One of the most rewarding merits the global pandemic has bestowed upon us is the limitless opportunity to immerse in nature, which perhaps, we had often neglected before the merciless virus penetrated our daily lives. Setagaya, the residential district of west Tokyo, is indeed, blessed with numerous parks and forest-like oases—some with historical backgrounds.

The Seikado Bunka Art Museum in Okamoto, Setagaya, opened in 1940, is a hidden treasure of art and culture surrounded by a surprisingly vast forest property referred to as the Okamoto Seikado Green Space. The museum was founded by Baron Yanosuke Iwasaki (1851-1908), the second president of Mitsubishi Corporation, and his younger brother Yataro (1835-1885). The museum pieces inside the museum—art objects; swords, tea-ceremony utensils, paintings, calligraphy, pottery, lacquerware, and Buddhist sculptures came from Yanosuke’s expansive collection since 1892, which evoked his profound passion for antiquities and desire to preserve them. His heir, Koyata Iwasaki (1879-1945), the fourth president of Mitsubishi, continued the collection after his father’s death. Today, the library and art museum houses around 200,000 classic books and 6,500 artworks, including seven National Treasures and 84 Important Cultural Properties. The library building is designed in the Western style with large manicured cone-shaped bushes and a picturesque fountain outside the entrance, which renders a nostalgic feel of Japanese pre-war architecture, fused in traditional and modern concepts.

Surrounding the museum property, the Okamoto Seikado Green Spaces boasts of huge camphor, cider, fern, evergreen, and Japanese zelkova trees. The main attraction in the forest is the Mausoleum of the Iwasaki Family, which was designed by British architect Josiah Conder (1852-1920) and built by Koyata Iwasaki in 1910. Conder was the pioneer of Western architecture in Japan during the Meiji era and who also designed the Kyu-Iwasaki mansion and western gardens of the Iwasaki family in Taito ward. The European-styled mausoleum in white concrete with a blue green dome is guarded by two lion-dogs, which are commonly spotted at the entrances of Shinto shrines. They resemble gargoyle beasts and are believed to be protectors of evil. In front of the mausoleum is a large, ancient and decorative Chinese bronze vessel that exudes a slight mysterious sensation of an East Asian spiritual existence amidst a European atmosphere, hence, completing the picture of Western and Eastern aesthetics. There are also tall stone lanterns and sculptured rocks for sitting around the forest. While wandering through the thick woodland, one can’t help feeling spellbound and at the same time, sublime at the marvel of such nature tucked in the city.

Behind the museum is another stoned pathway leading down to a small garden of flowering beds, such as cherry blossoms in spring, and a delightful peek of tall bamboo trees among the giant evergreens. As the museum property sits atop a hill, one can stand on a wooden ledge that opens to a spectacular panorama of Setagaya ward and its vicinity. Taking my leisurely afternoon walks in this wilderness as I have done occasionally during this time of the pandemic has surrendered a soothing calmness in the soul and a reassuring sense of contentment that despite the frenzy lifestyle of Tokyo and the prevailing constraints we have been subjected to for over a year, the raw beauty of nature’s gift can never fail us.

What Inflation Is Doing to Luxury Buyers in China, the US & the EU | Jing Daily

Why comfort is the killer of creativity

Geneva Watch Days: 17 watch Maisons for the only multibrand event to be held in Switzerland in 2020.

Brands Shy Away From Celebrity Marketing in China | Jing Daily