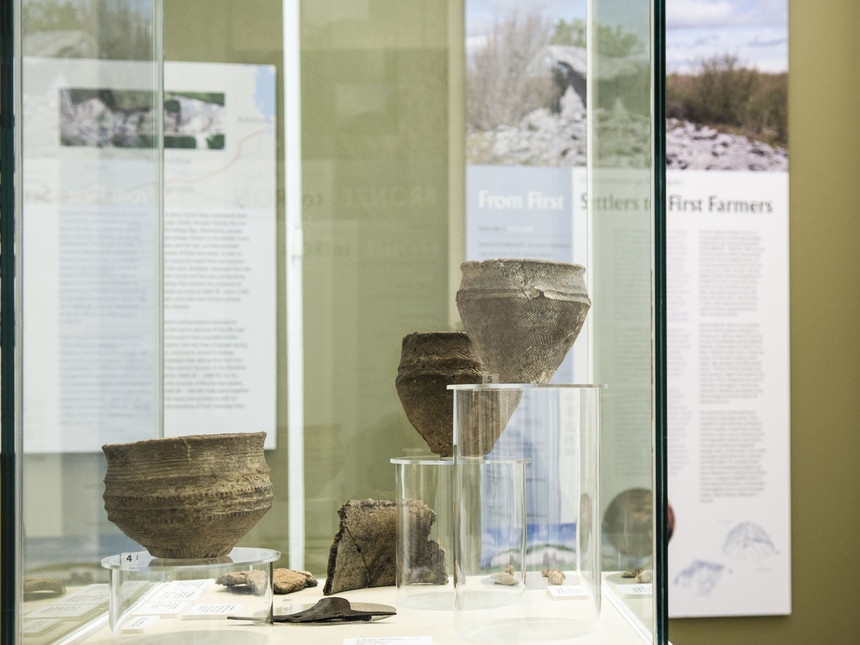 The River Corrib flows southwards from Lough Corrib, through Galway City and into Galway Bay. Historically, people have always chosen to live beside rivers, lakes and the sea, as they provided sources of food and water, as well as the means to travel from one location to the next. Artefacts recovered from the River Corrib and the area surrounding Galway City indicate the presence of people as early as 6000 BC, some 2,000 years after the first humans arrived into Ireland.

Recent archaeological excavations carried out in advance of the M6 road construction have provided further insights into the lives of people during the prehistoric period in Galway. Excavated sites dating from the earliest farmers of the Neolithic period (4000 BC – 2500 BC) to the burial grounds of Bronze Age people (2500 BC – 500 BC) help piece together their story and provide us with an understanding of their everyday lives.

The first settlers to Ireland, known as ‘hunter-gatherers’ arrived approximately 10,000 years ago during the Mesolithic period (8000 BC – 4000 BC). With the end of the ice age the climate had improved, resulting in dense woodland cover and increasing populations of birds, fish and animals such as pigs and deer. The first settlers hunted animals and gathered or foraged food such as nuts and fruit to survive. As they moved from place to place, they built temporary huts with wood and animal skins, close to rivers or lakes. Tools made from stone were used for hunting, preparing food and skins and wood-working.

Around 4000 BC, there was a transition from the hunter-gatherer lifestyle to a farming one, with the advent of the first farmers of the Neolithic period (4000 BC – 2500 BC). People began to settle in one place, cultivate cereals such as wheat and barley, rear livestock including cattle, sheep, pig and goat and build wooden houses. Pottery, for both domestic and ritual purposes, began to be made for the first time. Stone continued to be used to make tools and weapons. Forests were cleared for cultivation and grazing using the archetypal tool of the period, the polished stone axe.

The early farmers constructed burial monuments using large stones. These megalithic tombs generally consisted of a burial chamber, covered with a mound of earth or stone, and an entrance at one end. Four types of tombs are recognised: passage tombs, portal tombs, court tombs and wedge tombs (which were used into the Bronze Age). The cremated burials were often accompanied by pottery and stone implements. In Galway City at Menlo there is a collapsed megalithic tomb, while, in north-western Connemara, a concentration of 38 megaliths (court, portal and tombs wedge) reflects intense settlement in the area.

Changes in the material culture and burial traditions marked the beginning of the Bronze Age (2500 BC-500 BC) in Ireland. Whilst copper was used initially to make tools, it was discovered that by melting copper with tin, that a harder metal, bronze was produced. Copper was mined within Ireland, but the tin was most likely imported from south-western England. Various types of tools and weapons were produced including axeheads, spearheads, swords, daggers and halberds. Bronze Age Ireland is also renowned for its ornamental gold-work. Ireland’s rich copper and gold resources made it an important metal producing area in early prehistoric Europe.

During the Early Bronze Age the megalithic tomb tradition remained in use for a transitional period but burial practices then changed to single burials in a stone-lined cist or pit grave. Beaker pots, a style of pottery used in Britain and Europe, were used for both ritual and domestic purposes. Other vessels such as vases and bowls, possibly containing food or drink, and goods such as flint knives and beads also accompanied burials. With cremations, the burnt bone was placed within or beside the vessel. The graves, which were frequently marked with a mound of earth or stone, occurred in groups or cemeteries. In Galway two concentrations of cairns, cists and barrows have been identified along the east side of Lough Corrib and north of Clifden.

The Bronze Age is also synonymous with new forms of megalithic monuments such as stone circles, stone rows and standing stones, all of which seemed to have had a ceremonial function (some of which may be Late Neolithic in date). Single standing stones and a stone pair have been identified east of Lough Corrib, while in north-western Connemara, a concentration of stone rows, stone pairs and single standing stone has been identified as the third largest group of free-standing megaliths in Ireland.

The Iron Age (500 BC – 500 AD) marks the emergence and development of an iron technology in Ireland, leading up to the introduction of Christianity. Iron had been in use in Europe since 1000 BC. Much of the metalwork produced in Iron Age Ireland was decorated with an art style in use throughout Europe, known as ‘La Tène’. Various types of metal objects were produced including spearheads, swords, horse harnesses, trumpets and personal ornaments such as pins and brooches. The La Tène decoration executed on the renowned Turoe Stone, near Loughrea, Co. Galway also shows exceptional stone-working skills.

The Iron Age population lived in rural homesteads, many of which were defended by earthen or stone ramparts, and some of which were located within hilltop enclosures. Pottery seems to have been abandoned in favour of wooden or metal containers. A network of wooden trackways discovered in the Midlands indicates that wheeled transport such as horses and carts was in use during the Iron Age. Important developments in this period included the appearance of the first Irish script called Ogham, which was carved on stone pillars, and the use of a Celtic language.

Very few burial sites are known from the Iron Age. Burials, both inhumations (where the body is placed in the grave) and cremations, were interred in pre-existing mounds or pits and were occasionally provided with grave goods.

Dotted around the country there are a number of so-called ‘Royal’ sites associated with the period including Tara, Co. Meath, Navan Fort, Co. Armagh and Cruachain in Co. Roscommon which was the royal site in Connacht. Such ‘Royal’ sites indicate a hierarchical structure within society. Legends and folklore from later centuries, together with archaeological evidence from key Iron Age sites such as Navan Fort and the Black Pig’s Dyke, Co. Monaghan recall a time of cattle-raiding and warfare. One such legend, the Táin Bó Cúailgne, tells the story of Queen Maeve of Connacht and her attempt to steal a prized bull from an Ulster chieftain.

Apple Opens a Douyin Account. Will It Pay Off? | Jing Daily