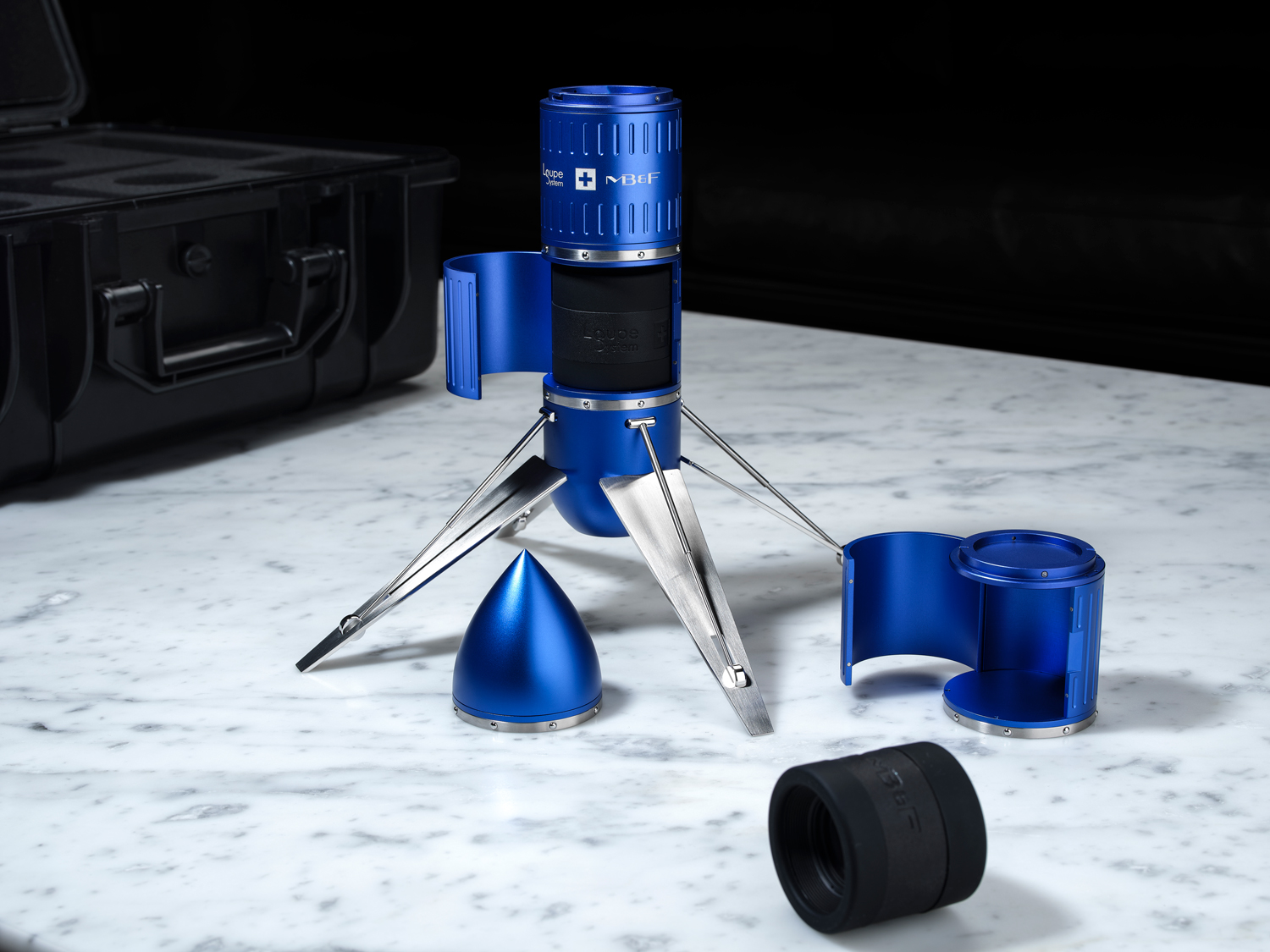 If you’re a serious watch enthusiast, you have undoubtedly heard of Loupe System – quite simply the most advanced portable magnifying loupes in the world today.

Loupe System has teamed up with MB&F to create Project LpX: an intergalactic magnification station enabling accurate viewing of watch movement details, while simultaneously reminding you of the immensity of our galaxy. Five elements combine to make a rocket entity much larger than the sum of its parts.

This versatile rocket ship offers dust-free storage of the highest quality magnification loupes, but does much more than that while sitting on a desk looking pretty: Project LpX is a smile-on-your-face reminder of the space-themed stories many of us read as a child, inspiring countless dreams of space travel and explorations of the unknown.

And then, you turn off the lights to discover an eerie greenish glow emanating from underneath the rocket base, making the capsule appear to lift right off the desk. The smile on your face broadens as more childhood memories flood back.

Project LpX is made up of five modular parts, perfectly packaged in a sturdy travel case: 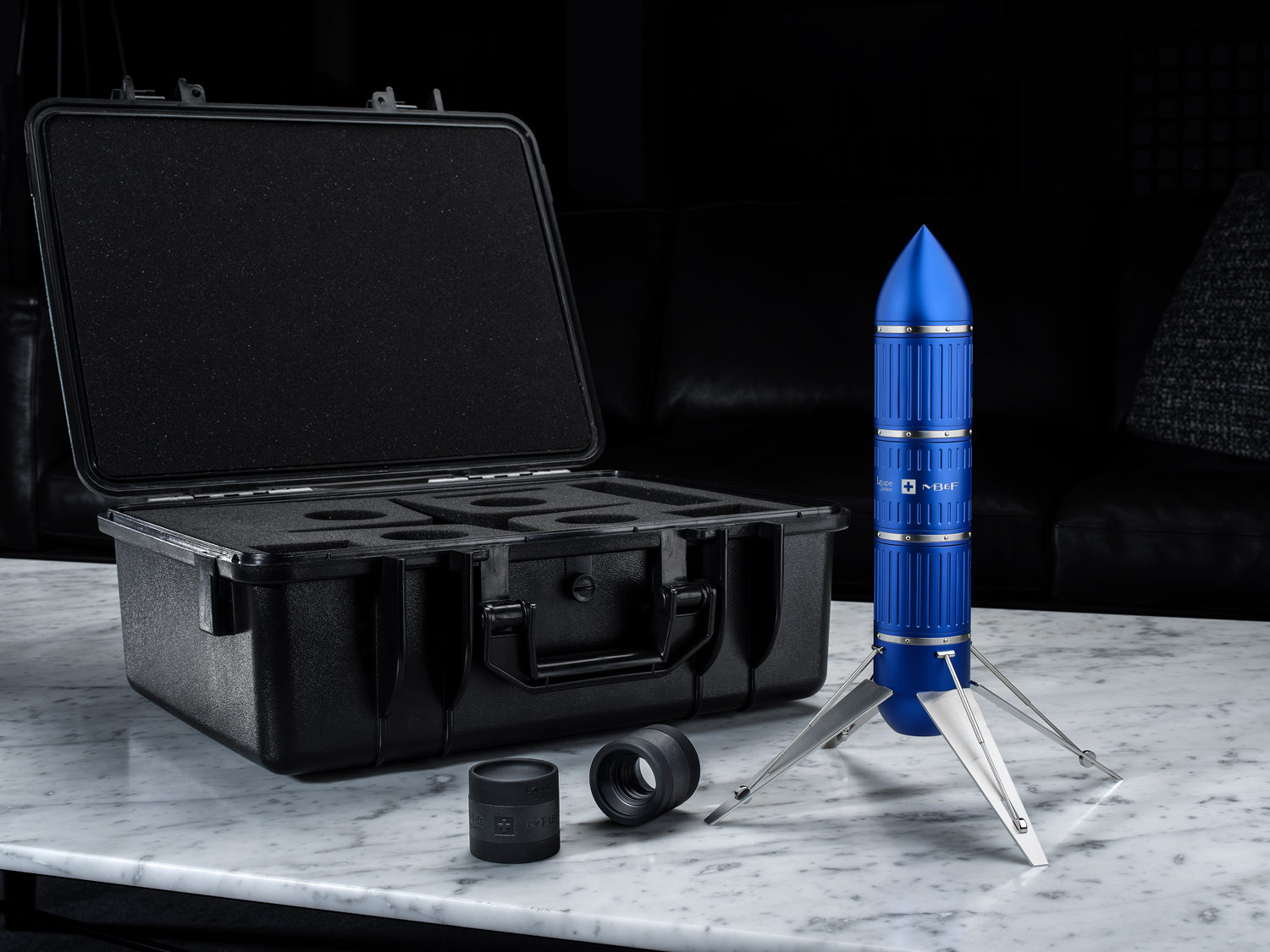 The anodized aluminium rocket base contains a tritium capsule “booster” emitting a cosmic glow in the dark, making it ready for take-off in search of new lifeforms. The light comes from a self-luminous tritium capsule with a half-life of 15 years; torches/flashlights using the same technology were part of the equipment that NASA issued to Apollo astronauts. The glow requires no supplementary power sources and it is not affected by temperature, humidity, or altitude. Polished and satin-finished stainless steel, non-articulated landing struts are also attached to the base so that Project LpX can stand on its own.

The rocket can be configured to accommodate one, two, or three Loupe System loupes, each hidden inside the rocket to be revealed at the owner’s leisure (and pleasure). The three anodized aluminium “stage” components attach to each other using a clicking bayonet system (similar to the lens mount for an SLR camera), making them easy to assemble and disassemble (or play with). Project LpX comes with two Loupe System loupes in different strengths: 3x and 6x magnification.

The anodized aluminium top rocket section doesn’t just minimise aerodynamic drag, it points toward space providing a constant reminder that there’s more to discover out there. The nose cone can be attached to any of the modular “stage” components using the same bayonet system.

Loupe System’s universal clip is also included in the case, allowing you to attach the loupes to any mobile phone or tablet, and thus use them to take macro photos or videos.

Project LpX launches in 4 limited editions of 99 pieces each in black, blue, red or green. 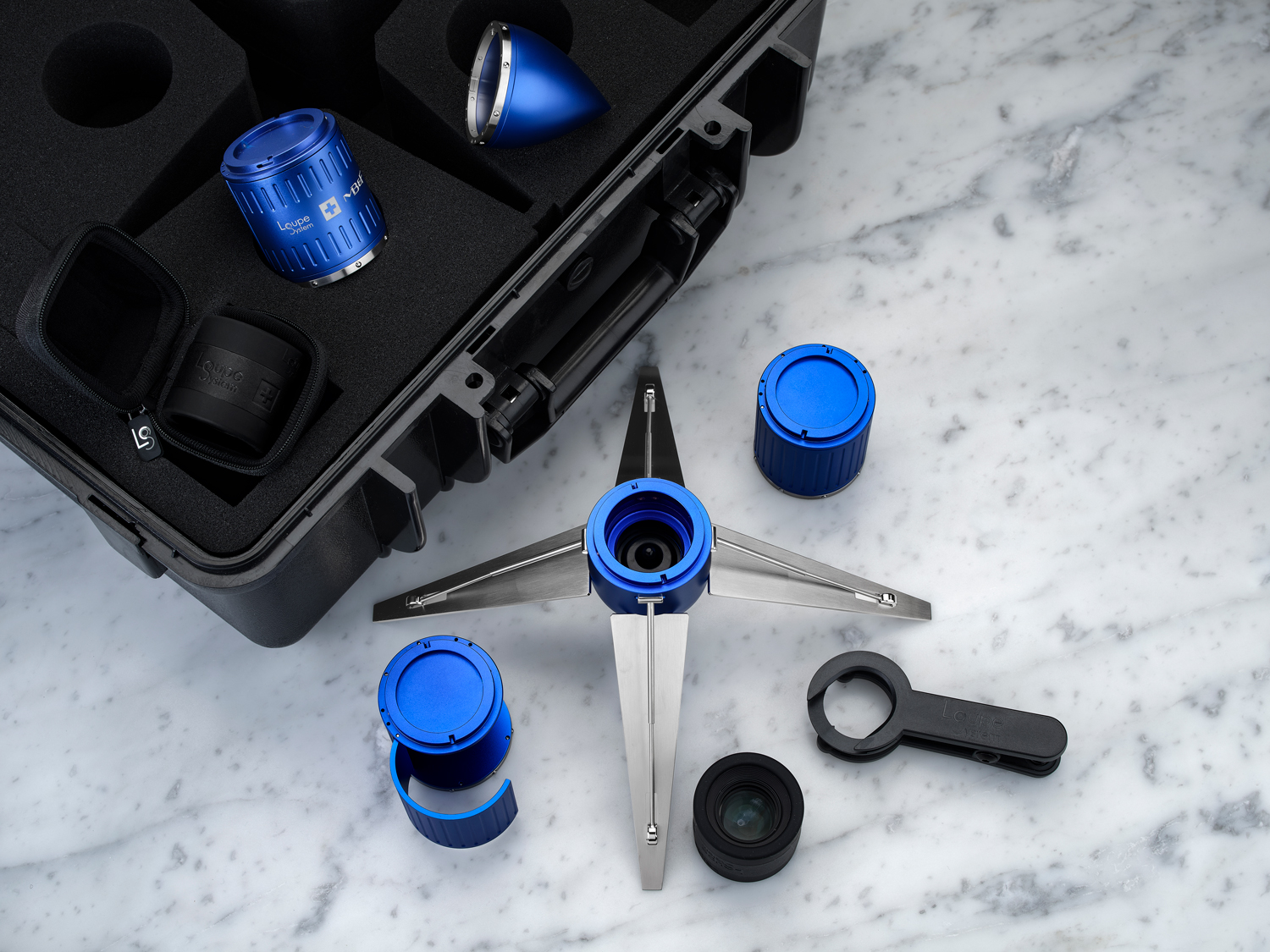 Synchronous, forward-thinking imagination knows no bounds: the idea for this ballistic project began when the founder of Loupe System saw MB&F’s just-launched Arachnophobia at Baselworld 2016. As fate would have it, he simultaneously presented a spider-shaped holder for his high-quality loupes at his booth at the same fair. The following year at Baselworld, when MB&F launched the rocket-shaped Destination Moon clock, Loupe System had a rocket-shaped loupe-stacking system. And then again at Baselworld 2018, when MB&F launched the spacecraft-like Fifth Element weather station, Loupe System had a flying saucer-shaped loupe holder at its booth. That final act of synchronicity convinced MB&F founder Max Büsser that a cosmic co-creation with Loupe System was virtually predestined.

“For three years running, we separately came up with the same ideas presented at the same editions of Baselworld,” says the founder of Loupe System. The third time was obviously a charm!

Project LpX was designed by Maximilian Maertens, the same designer responsible for the recently introduced clock T-Rex (which MB&F co-created with clock specialists L’Epée 1839). Maertens, who began as an intern working with Büsser on various projects, was loosely inspired by both past MB&F projects and the SpaceX Falcon, a partially reusable two-stage heavy-lift launch vehicle.

“Project LpX” (pronounced “loupe ex”) derives from the working code name for the project begun in 2018 – “Project X”. The X caught on, and prefixed with an abbreviated version of Loupe, became Project LpX. 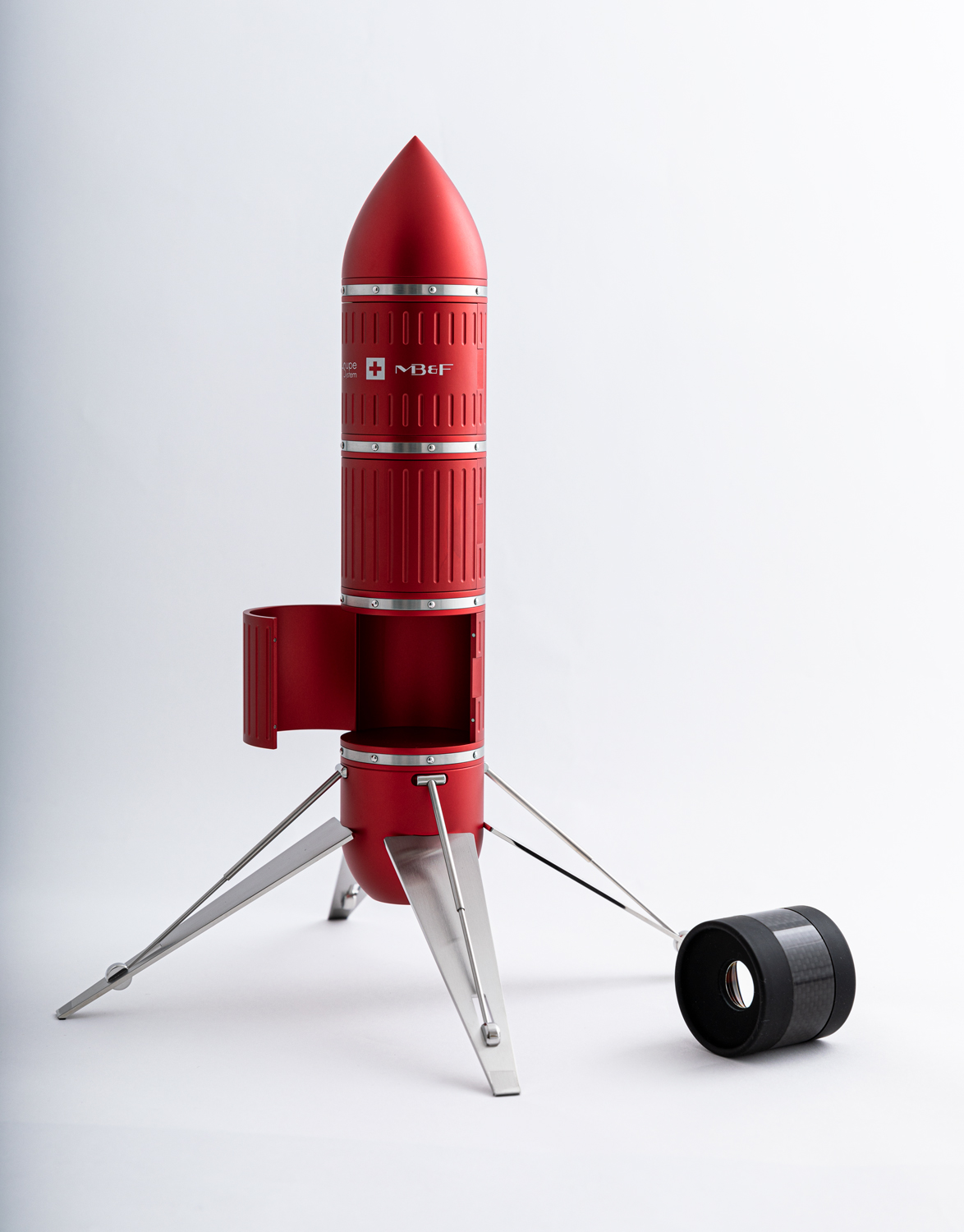 Project LpX launches in 4 limited editions of 99 pieces each in black, blue, red or green.

Accommodates one, two or three magnifying loupes (delivered with two); rocket booster glows in the dark.

Light: in base, tritium capsule

Contents: rocket split into base with tripod, three stages and nose cone; 2 loupes with own protective cases; and a universal clip to attach a loupe to a mobile phone or tablet 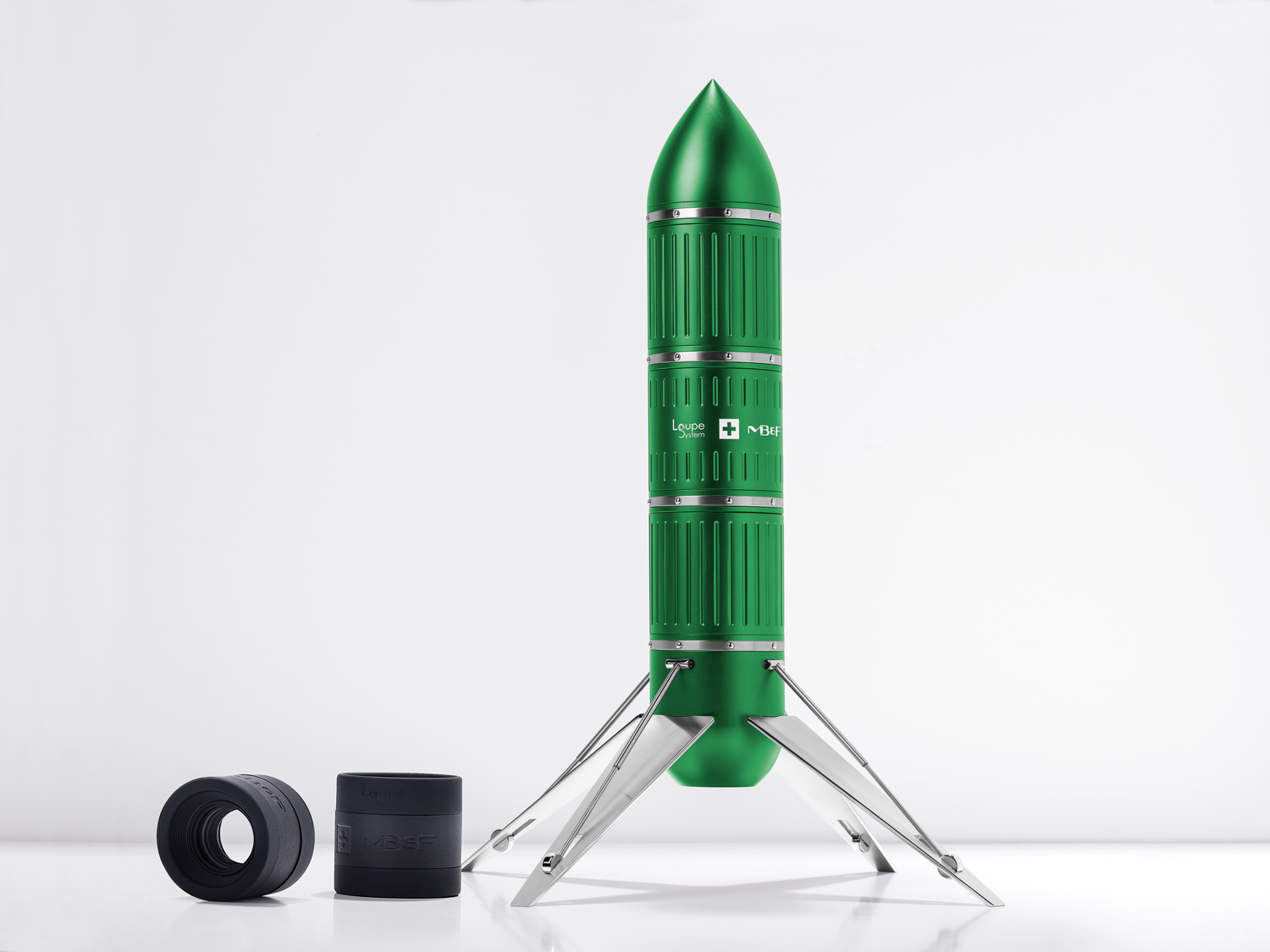 Founded in 2012, Loupe System was born from the quest for a superlative portable loupe to accurately admire the details of fine watches. The founder of Loupe System – a serious watch collector – was irritated by the simple loupes widely available in the watch industry comprising a single optical element for magnification, which provided a good view only in the centre of the viewing field. Along the edges, chromatic aberration (diffraction and/or colour shift) were the order of the day.

Realizing that such effects can be chiefly corrected by the use of additional optical elements with the right optical layout, the founder of Loupe System decided to make his own loupe to meet his high standards and provide himself better viewing of the horological treasures he so loved. He used a professional optical system from an early 1980s camera comprising five optical elements arranged in three groups: two as doublets sandwiching a single lens in the middle. While the central lens magnifies the image, the pair of doublets correct distortion. Once properly modified, this arrangement provided a clear viewing field 40mm wide with 6x magnification, largely free of chromatic aberration and distortion.

This homemade loupe was noticed at watch fairs and other events by some of his watch-collecting and -making friends, who also wanted such a superior magnifier. So he made a few more, selling out within a matter of hours at Baselworld 2012 to clients that included the cream of today’s independent watchmaker crop – some of the most discerning eyes in the business. These first 32 handmade loupes became the inspiration for Loupe System’s Model 01.

You’d be forgiven for mistaking the Loupe System loupes for camera lenses on first sight. The cylindrical shape adds to the ease of use and comfort in inspecting the miniscule microcosm that is a watch movement. The look definitely harkens back to that early 1980s camera lens, but the light aluminium casing, fully clad in silicone, is grippable, shock resistant, and protects watch cases from scratching should the loupe accidentally come in contact with them. Additionally, the modular construction makes it easy to clean the loupes, and to add other accessories now available in the Loupe System collection, including rechargeable illumination.

Loupe System’s products allow you to appreciate the finest hand-finished watches to the fullest extent conceivable – and can even be used to photograph or video a watch movement (or other item) you are inspecting. A Loupe System free-standing tablet mount, or the Universal Clip, paired with an AirPlay-enabled device, allows you to easily broadcast a live macro image to a big screen and thus explain the inner workings of a movement to a large audience.

2019 marked the 14th year of hyper-creativity for MB&F, the world’s first-ever horological concept laboratory. With 15 remarkable calibres forming the base of the critically acclaimed Horological and Legacy Machines, MB&F is continuing to follow Founder and Creative Director Maximilan Büsser’s vision of creating 3-D kinetic art by deconstructing traditional watchmaking. 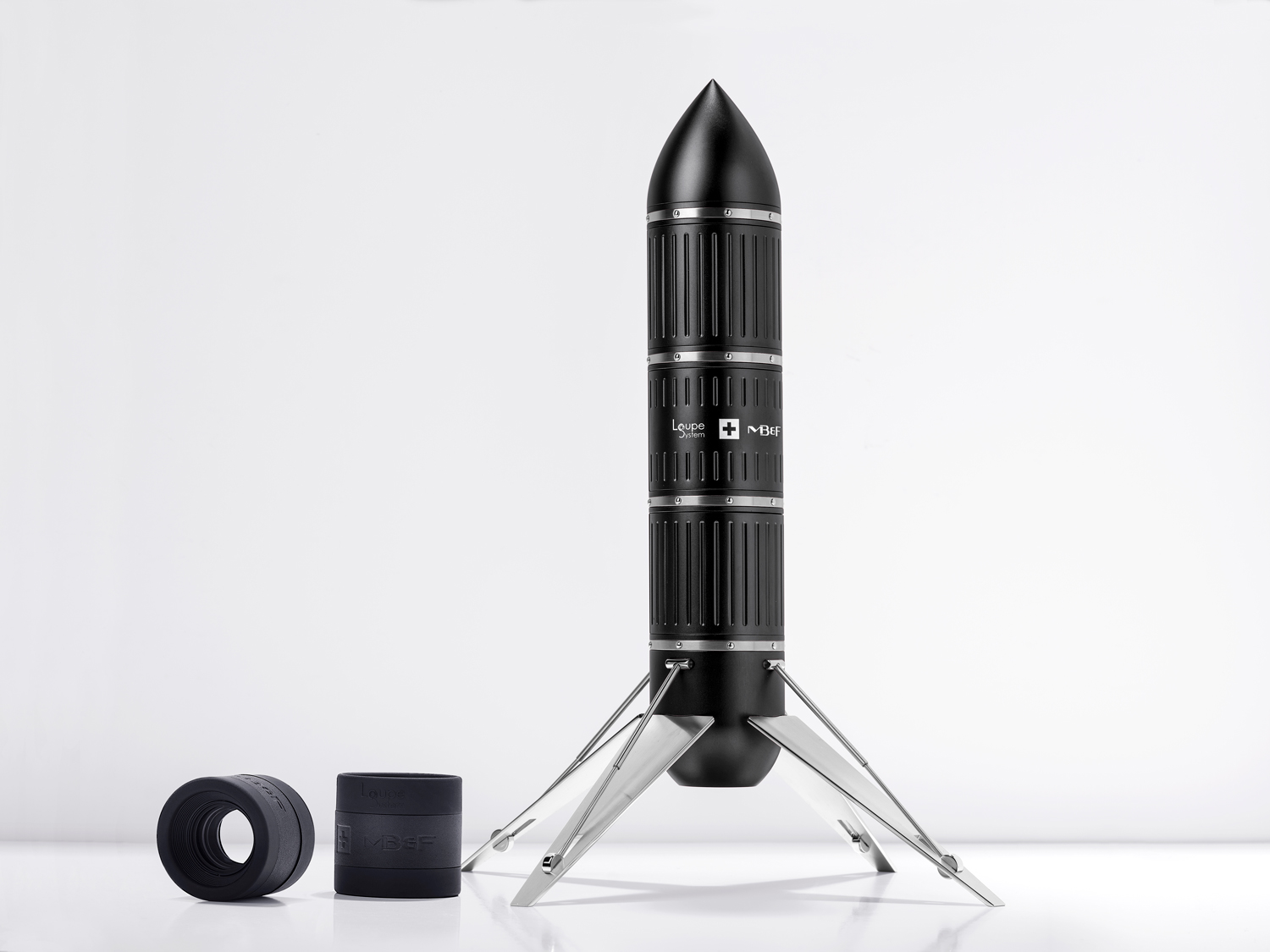 As the F stands for Friends, it was only natural for MB&F to develop collaborations with artists, watchmakers, designers and manufacturers they admire.

This brought about two new categories: Performance Art and Co-creations. While Performance Art pieces are MB&F machines revisited by external creative talent, Co-creations are not wristwatches but other types of machines, engineered and crafted by unique Swiss Manufactures from MB&F ideas and designs. Many of these Co-creations, such as the clocks created with L’Epée 1839, tell the time while collaborations with Reuge and Caran d’Ache generated other forms of mechanical art.

There have been distinguished accolades reminding us of the innovative nature of MB&F’s journey so far. To name a few, there have been no less than 4 Grand Prix awards from the famous Grand Prix d’Horlogerie de Genève: in 2016, LM Perpetual won the Grand Prix for Best Calendar Watch; in 2012, Legacy Machine No.1 was awarded both the Public Prize (voted for by horology fans) and the Best Men’s Watch Prize (voted for by the professional jury). In 2010, MB&F won Best Concept and Design Watch for the HM4 Thunderbolt. In 2015 MB&F received a Red Dot: Best of the Best award – the top prize at the international Red Dot Awards – for the HM6 Space Pirate.