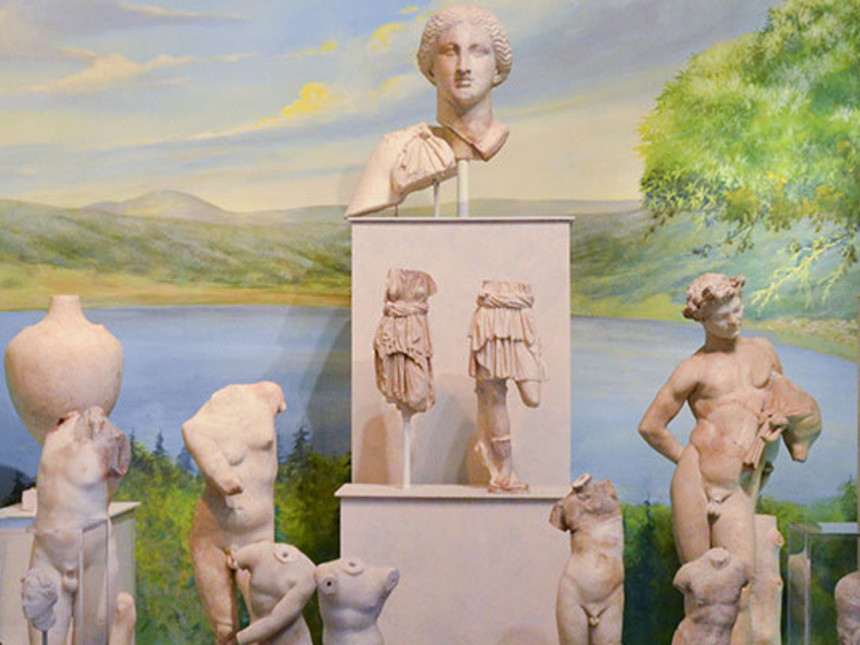 The artistic, commercial and technical achievements of the Romans are evident in The Roman World gallery, which is filled with marble sculptures, including a highly unusual head from a cult statue of the goddess Diana as well as other deities, priests and men and women of the Roman Republic and Empire. Dominating the Roman World gallery is an internationally famous military relief, once part of a commemorative arch for the emperor Trajan, erected in 102 CE at ancient Puteoli near Naples. This monumental sculpture is also a prime example of Roman politics combined with Roman practicality—the opposite side of the marble block contains an earlier inscription honoring the emperor Domitian. Visitors can see how the inscription was painstakingly, but incompletely, chiseled off after Domitian’s assassination and official disgrace by the Roman Senate in 96 CE.

The Penn Museum’s Mediterranean galleries highlight more than one thousand artifacts including marble and bronze sculptures, jewelry, metalwork, mosaics, glass vessels, gold and silver coins, and pottery from the Museum’s outstanding Mediterranean collection of more than 30,000 objects, which date from 3000 BCE to the 5th century CE.

The Romans traced their mythical beginnings to the Trojan War and to Romulus, who supposedly founded the city of Rome in 753 BCE. It was the genius of the Romans to transform Greek ideals and the ways of their Etruscan forerunners into their own civilized and highly organized way of life. During the 4th and 3rd centuries BCE they absorbed many parts of Italy, including the Etruscan homeland. In the 3rd and 2nd century BCE they captured the Carthaginian controlled areas of North Africa, Sardinia, western Sicily and Spain, the Greek colonies of southern Italy and Sicily, the Greek homeland and the Hellenistic kingdoms. Under the reign of Trajan (98-117 CE), the Roman Empire reached its greatest extent. Roman norms embraced the empire, incorporating peoples of various races, language groups, and cultural backgrounds.

The Penn Museum is fortunate to have one of the largest collections of Roman glass in the United States. Beautiful miniature engraved gems, jewelry and gold and silver coins reveal much of the artistic skills of the Romans through their exquisite detail and craftsmanship. Objects from the Museum’s celebrated Roman glass collection–an exhibition of which recently traveled nationally—offer colorful and sparkling reminders of the sophistication of Roman taste and style. Amphoras from the 1950’s explorations of the renowned Jacques Cousteau off the coast of Marseilles tell part of the story of Roman maritime trade. Portraits of Roman women, perfume vials, jewelry and cosmetic implements fill out the theme of women in Roman society, while portraits of children and their toys offer insight into the lives of children in the Roman world.

Objects from the houses of Roman men and women, their dining vessels and household decoration, such as painted wall plasters and mosaics, as well as utilitarian objects—the lead pipes that brought them drinking water—are seen in the section of The Roman World gallery on domestic life. The centerpiece of this part of the gallery is a 4 ft. x 2 ft. model of a Roman house of the type excavated at Pompeii and Herculaneum. Visitors can hear the “voice” of Vitruvius, a famous Roman architect, describing variations in housing design. Numerous bronzes, including several 19th century cast replicas of objects excavated at Pompeii and Herculaneum and given to the Museum by department store founder and Museum board member John Wanamaker in 1904, enhance the display of Roman domestic life.