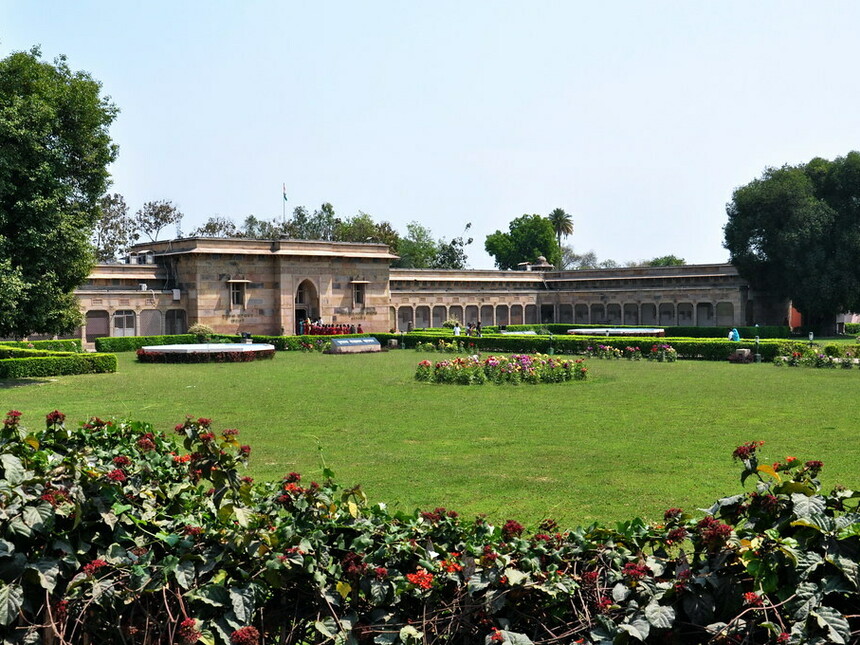 For Buddhists, Sarnath is a holy place. It is where Gautama Buddha taught his first sermon after attaining enlightenment in 528 BC. This is where the Buddhist Sangha came into existence through enlightenment, when he gave his first sermon, the Dhammacakkappavattana Sutta, to his first five disciples Kaundinya, Assaji, Bhaddiya, Vappa and Mahanama.

While excavating lots of sculptures and artefacts were retrieved from the archaeological park. Sarnath Museum houses these ancient remains of Buddhist stupas, monasteries and temples. Add a visit to the Sarnath Museum and Sarnath Archaeological Park to your Varanasi Travel itinerary.

Sarnath’s excavations show proof of continuous occupation from 3rd B.C. to 12th A.D. However after the 12th century, the place faded into oblivion.
In 1798 Mr Duncan, the then Commissioner of Benares, gave an account of a casket of green marble inside a stone box discovered while dismantling the Dharmarajika stupa to procure building materials. The discovery stirred up lots of curiosity and interest in Sarnath.
Later on, more excavations were conducted at the site by Sir Alexander Cunningham (1835-36). Major Kittoe (1851-52), Mr C.Horne (1865), Mr F.O. Oertal (1904-05), Sir John Marshall (1907), Mr H. Hargreaves (1914-15) and Mr Daya Ram Sahni(1927-32).

The construction of the museum building spanned the years 1904 to 1910. Sir John Marshal, the then Director General of Archaeology, conceived the idea of planning the museum as per the pattern of a Sangharam or a vihar. James Ransome designed the museum based on this plan. You will find the similarity of the Central hall as the main chapel of the vihar(monastery). The galleries are monastic cells and the verandah resembles the front of the cells of a monastery. The whole building is made of sandstone with a flat roof.

What is inside Sarnath Museum?

To the extremely curious readers, the answer is that Sarnath Museum preserves many sculptures, artefacts, statues of Goddess Tara, Bodhisattva and the iconic Ashoka Lion Capital, also known as the ‘National Emblem of India’. All of these are grouped in Verandah North, Verandah South, Gold Gallery and Galleries 1 to 5. The two verandahs are on either side of the entrance of the museum, where many architectural pieces are exhibited like lintel, face stone, doorjamb, bas-relief, pediments etc.

Some major exhibits you must see in Sarnath Museum are:

The most unforgettable statue in the Sarnath Museum is that of the “Lion capital”, India’s national emblem. As you enter the main hall, you will see the four lions gazing down at you. It is made of Chunar sandstone and measures 2.31 m in height. Its characteristic Mauryan polish makes it unique. This lion capital once adorned the Asoka Pillar in the deer park of Sarnath!

Or the “Umbrella of Bodhisattva” belongs to the Kushana period 1st century AD. It measures 304×30 cm. It is adorned with concentric circular bands of decorations.

Fragile and broken objects of gold:

Discoveries of more ancient remains are made frequently at the archaeological park. One, very precious, the discovery was made in May 1990. A baked clay plot containing a few gold objects was found on the premises of the Myanmar Temple adjacent to the excavated area of Sarnath. Historians have concluded that they must have had high religious value as they retained religious symbols popular in Buddhist religion and art. The collection has fragile and broken objects of gold foil, copper, copper plated with gold, clay wrapped in gold foil, beads of semi-precious stones and more. You can find them neatly displayed in the Gold Gallery.

Slab with the inscription:

A stone slab measuring 50x63x14 cm dating back to the 12th century bears an inscription of Kumar Devi, the Queen of Gahadwal King Govindrachand. It refers to the construction of Dharmachkra-Jin-Vihara at Sarnath. This is in Gallery nr 2.

The standing image of Bodhisattva of Red sandstone of Mathura. The pedestal and the back of the image bear the inscription of Friar Bala of Mathura. This impressive statue of red sandstone, measuring 250x105x34 cm, belongs to the Kushana period, 1st century AD.

Islam's paradox and the insult