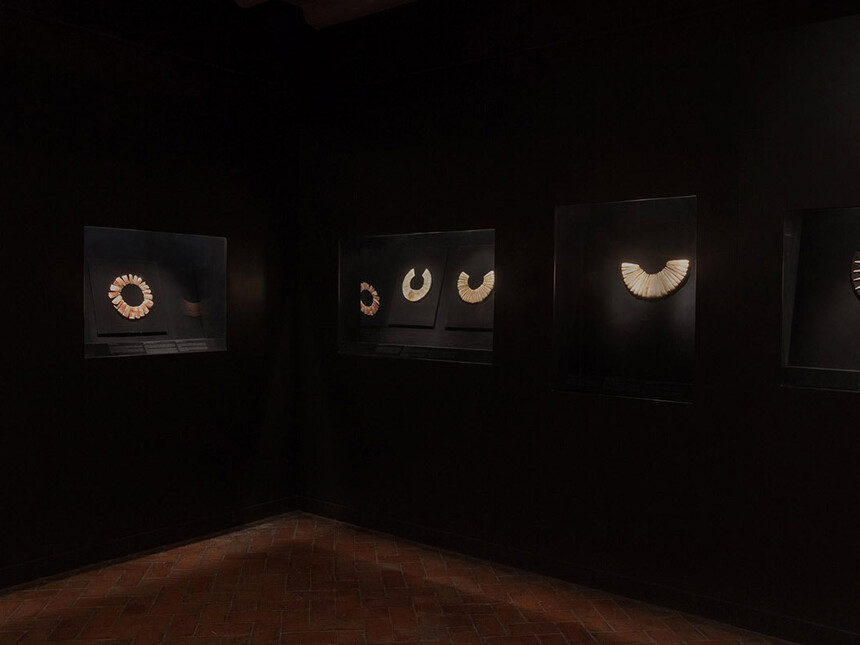 The first European chroniclers emphasized the existence of objects of outstanding manufacture made in shell or bone, whose purpose was to preserve or reproduce mythical narrations. Shells brought from very distant warm seas reveal the existence of exchange networks and alliances stretching over long distances.

The elites of ancient Peru wore ornaments of sea shells, whose organic forms were finely carved and polished, to symbolize the connection between their carriers with the marine world and its regenerating capacity. This bracelet was made from marine snails cut, carved, polished and strung together to create an jewel of great beauty to the eye. The creator resects the natural object but simultaneously intervenes it with delicate incisions.

Snakes express the regenerative power of the underground inner world they can access. This exquisitely and masterfully carved bone pin shows two intertwined serpents one on the other and both with heads of feline traits that underscore these animals’ predatory nature as a metaphor of life that opens the way to but also emerges from below. Serpents are expressions of the regenerative force of the interior and subterranean world they can access.

The Spondylus shell was linked to the cycles of nature and was an important indicator of changes in the environment – such as the El Niño Southern Oscillation – and therefore had important symbolic and ritual connotations. These extraordinary pectorals were made of tiny Spondylus shell beads. The staggered motif was carved with great precision and dexterity to represent the interaction between worlds. Ritual and esthetics merge in the characteristic sobriety of these Mochica artifacts.

The Best Pants for Men Available on Sale Right Now