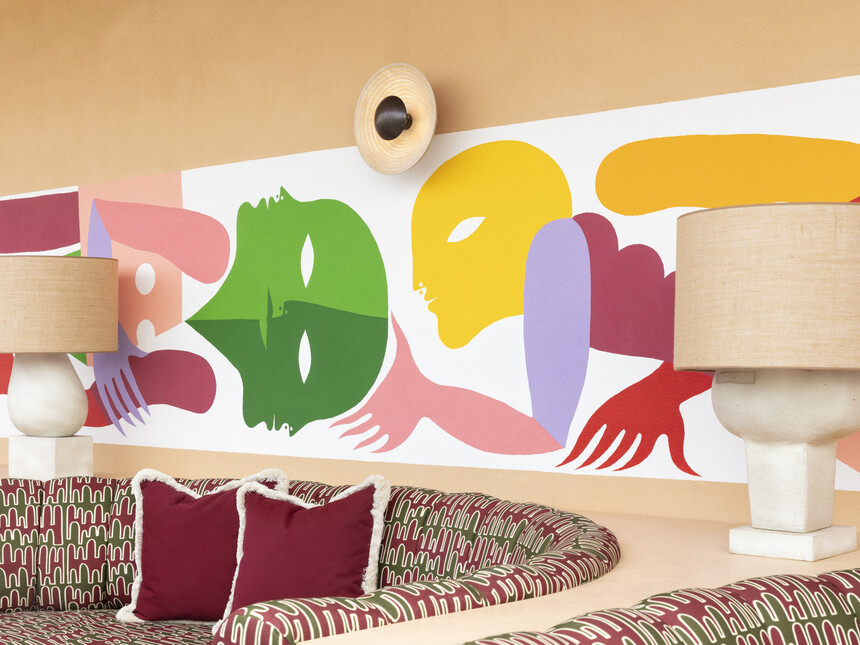 Our most recent visit to Rome didn’t need to involve hopping from one attraction to another; we have done that quite a few times. However, our short weekend window escape from London did allow us to appreciate the atmosphere of this favourite city of ours, however briefly, from the base of Soho House Rome, a novel newcomer to the established hotel scene in the Eternal City. Arriving on a late Friday flight, we were whisked from the airport by a friendly and knowledgeable taxi driver to the heart of San Lorenzo, an arty, anarchic quarter that’s more associated with grunge and grit than tourist groups. Being in Rome, we might as well start with the food awaiting us in the newly opened Cecconi’s Terrazza restaurant on the 10th floor, buzzing that night with the typical energetic Soho House vibe.

Italian favourites are the perfect accompaniment to those panoramic views. Here, you’ll find creamy burrata with cherry tomatoes, basil, and Venetian classics such as beef and ricciola carpaccio with stracciatella and fresh mint. There’s also handmade pasta and seafood: tagliatelle bolognese, prawn ravioli with fresh tomato, and lobster spaghetti served with a fiery puttanesca sauce. The House Kitchen, located on the ninth floor, is a space for all-day eating and drinking. The menu is divided by courses but also by style – this means you can choose between dishes that appear on Soho House menus all over the world and ones that are a speciality of the Rome club. We followed an insider tip on arrival, exhausted after our flight: get the rigatoni amatriciana every time and wash it down with a glass of Sangiovese.

Retreating to a bedroom in a Soho House hotel always contains elements of familiarity and surprise. They are set across three floors; ranging from Tiny to XXL, most have balconies overlooking the city. We admired the Roman Graniglia flooring, stucco-rendered walls, and timber wave-shaped bed frames, not to mention the free-standing bathtub in the living space and the walk-in shower with the familiar range of Cowshed products. The ceramic bedside table lamps, hand-painted with a carved top and crackled glaze finish, are a unique collaboration with Italian designer Bitossi – first made in the 1970s – and have been remade exclusively for the House. The House also includes 20 long-stay apartments: available as studios and one, two, and three beds, and they’re furnished with pieces sourced from vintage markets, as well as bespoke items that take inspiration from classic Italian furniture.

In a first for Soho House, an in-house team masterminded the building: its specially designed travertine and plaster-clad façade makes a Roman statement of intent; here I am, here to stay. It features balconies and Crittall windows on every level, giving it an industrial feel that draws inspiration from the Pastificio Cerere Foundation building and artists’ studios in San Lorenzo. Designed to provide 360-degree views across the city, the 10th-floor rooftop has a pool, bar, and restaurant. The bar and restaurant occupy three sides of the space, and a large mural by artist Gio Pistone is on the wall above a row of banquettes. The bar, finished in terracotta with a brick tile front, features furniture upholstered in Italian burgundy and green, with festoon lighting, lemon trees, and trails of vines adding to the mood.

Before departure, we replenish our energy briefly in the new fitness, health and wellness space, Soho Health Club, set across the seventh and eighth floors. They say it reinvents how we take care of ourselves in today’s world. Hence, your wellness journey could include cryogenic chamber therapy, an ozone machine session, a massage, or even a yoga session on the balcony, where the sun setting or rising would cast a glow over the city’s roofs. However, taking advantage of these novelties will have to wait for our next visit.

How Have China's Regulatory Policies and Stimulus Shaped Its Equities for 2022? | Jing Daily

3 Rules For Luxury In Web3 And The Metaverse | Jing Daily

The Difference is in the Experience

Down to the Wire | Blackbird Automotive Journal