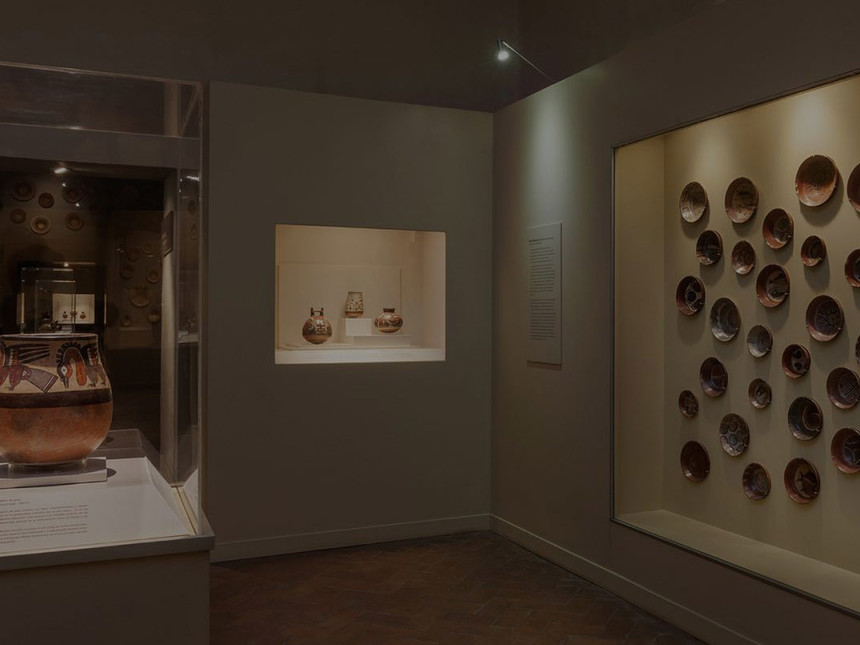 By changing the socio-political organization of the Paracas civilization, the Nasca culture consolidated on the south coast of Peru (1 B.C. – 800 A.D.). Theris was an extremely hierarchical society sustained by an agriculture-centered vision of the world they built in a dry habitat that evolved thanks to the use of groundwater and required highly sophisticated hydraulics for irrigation; however, Nasca perfection was not restricted to this type of infrastructure. Their art as well reached a high degree of abstraction.

In Peruvian colloquial language a huaco is any piece of cooked earth, created by any of the civilizations that evolved between the origin of civilization to its apex with the Incas, that is, three thousand years of civilizing genesis and expansion. The term huaco -derived from huaca, a Quechua word designating a sacred place or object, whether natural or man-made-defines a unique, typically Andean aesthetic style.

These complex, recurring Nasca art scenes show mythological beings holding trophy heads. The human head in the Andean world has been closely linked to vital power, fertility and rebirth. In mythology, supernatural characters act as decapitators who take the heads of their victims whom they regard as their recovered property, perhaps symbolizing an action needed to restore or start a new cycle of regeneration. Nasca artists mastered the use of textures and colors extracted from earth.

In the Andean worldview, the head was a powerful metaphor for the power to regenerate life. When buried in the earth – the underworld of the dead – heads assured the regeneration of life in the world above. Nasca ceramic artifacts often include heads presented as offerings, typically images of the community’s ancestors. These bowls showing faces with eyes wide open and thorn-pierced lips were deposited in Nasca tombs as if seeds on the ground. War has been reflected in art of all times. These Nasca artifacts stand out for the sobriety in their rendering of fierceness and pain.

An extraordinary set of vases evidencing the Nasca artists’ dexterity in using designs, paint and color. These tall vessels showing geometric designs – laden with symbols, such as steps, circles, trophy heads, stars, chevrons, undulating lines, chakana crosses and other geometric lines alluding to mountains or water – were used in ritual toasts with chicha or other beverages. Such ceremonies helped to create social relations and commitments, propitiate the encounter among worlds and secure agricultural production.

Taste: A Celebration of Flavor

Cannes Film Festival 2022: Best and Worst Dressed on the Red Carpet So Far

All About Coarse: Visionary Creations From Mark Landwehr and Sven Waschk