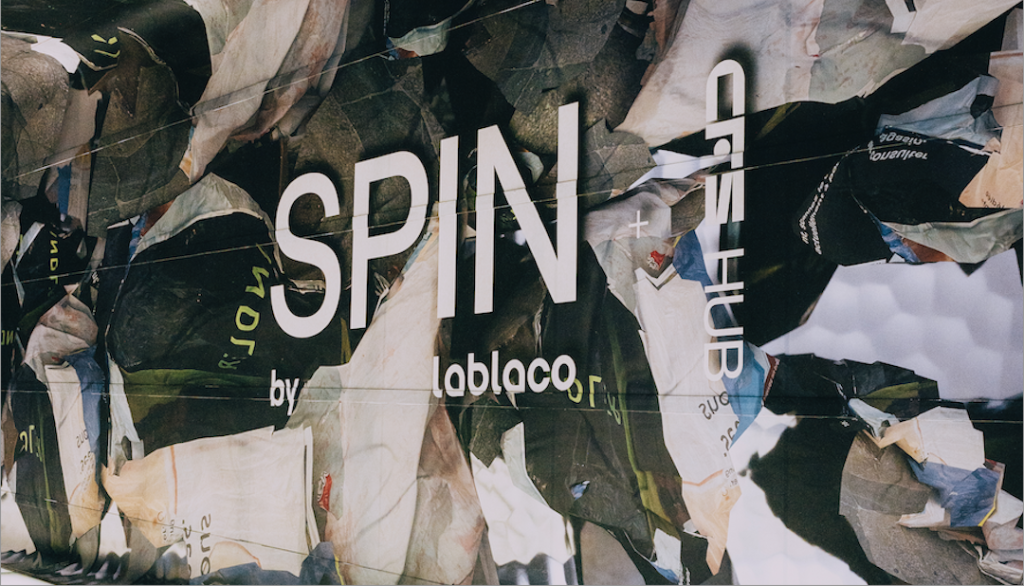 What Happened: Following the launch of its first-of-its-kind meta-retail exhibition at Galeries Lafayette Champs-Elysées, SPIN by Lablaco brings its pioneering, cross-dimensional vision to Paris Couture Week. The Web3 circular retail platform has invited a number of its CFS Hub designers — including Weinsanto, DRESSX, Grace Ling, and Miss Sohee — to showcase previews of their couture collections during the event using phygital NFTs, augmented reality, and VR.

For the exhibition, the iconic Parisian retailer’s atrium has been transformed into “a vision of the future” using a blend of both Web2 and Web3 technology. Visitors are able to try on digital garments using cutting-edge programs, promoting a retail experience both immersive and efficient.

The mixed-reality project thus advocates ownership, zero waste, and sustainability. And so, to avoid dead stock, all of the creations are available to purchase via an ethically made-to-order system. Each design will arrive as a digital NFT twin alongside its physical counterpart.

SPIN by Lablaco is bringing some of couture’s most prolific names to the metaverse through its latest project. Photo: Lablaco.

The Jing Take: A venture of this scale represents a huge step forward for fashion and Web3. The project is evidence of the industry’s long-term unfolding in the digital space. It will also increase accessibility within the notoriously exclusive world of couture, allowing more customers to own and appreciate the designs. For traditional fashion enthusiasts that remain reticent to the prospect of Web3, a demonstration of metaverse couture — and its considerable potential — is a clever move. And one that might just sway (even the most hard-set) opinions.

Platforms like Lablaco are spearheading this movement toward mainstream adoption. The next-gen innovator has already started 2023 with a bang in the metaverse, by partnering with one of the globe’s most famed fashion retailers to bring its digital ecosystem offline.

But the project is more than just smoke and mirrors — something Web3 often finds itself criticized for. The retailer also wants to encourage consumers to make more informed and conscious purchasing decisions. All items for sale during the event will come with IoT-enabled QR codes powered by SPIN and backed by the Flow blockchain, which allows their holders to trace the journey of the design they’re interested in purchasing.

This innovative approach aims to give consumers a sense of responsibility and knowledge about the origins of the clothing. At the same time, it also elevates shopping from a routine task into a thought process — one in which customers are empowered to make informed and conscious purchasing decisions.

As Web3 snowballs, brands will feel compelled to jump upon the digital bandwagon. But Lablaco is showcasing how innovation can be embraced in a way that goes deeper than merely tapping the latest trend. The metaverse marks a pivotal moment in fashion. But for the industry to survive, it is reliant on commitments like Lablaco’s to pave the way for a sustainable, inclusive, and democratized future ahead.

The Sweet Sound Of AMG