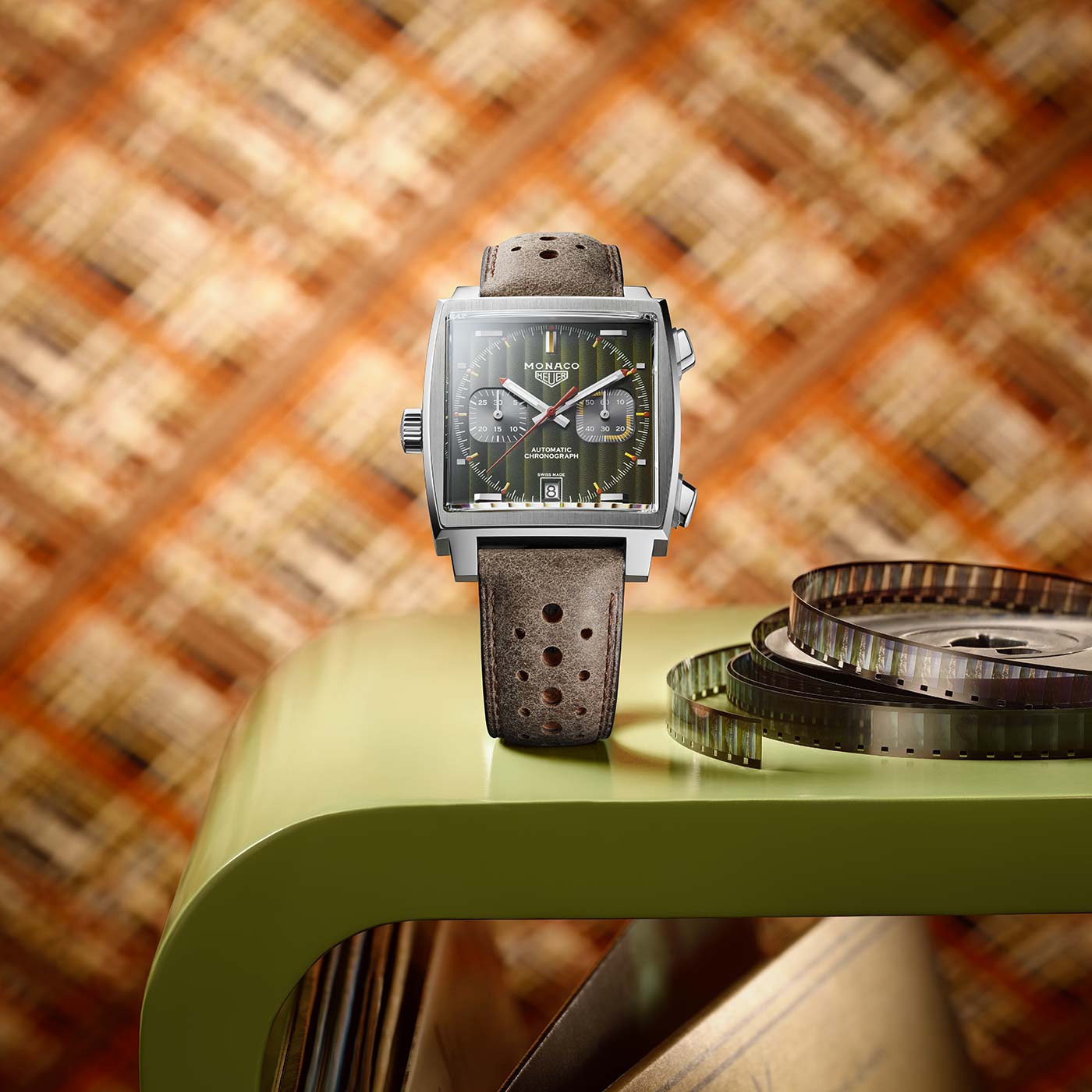 • TAG Heuer kicked off the 50th anniversary celebrations for the Monaco timepiece at the Monaco Formula 1 Grand Prix, the legendary event that gave the watch its name in 1969.
• TAG Heuer unveiled the first of five new collector’s timepieces inspired by the original Monaco. Five creations of the timepiece will be successively revealed throughout 2019.
• Guests were granted access to some of the most prestigious and exciting events in Monaco, including a Saturday evening party on the TAG Heuer Yacht, hosted by Patrick Dempsey and Bella Hadid. 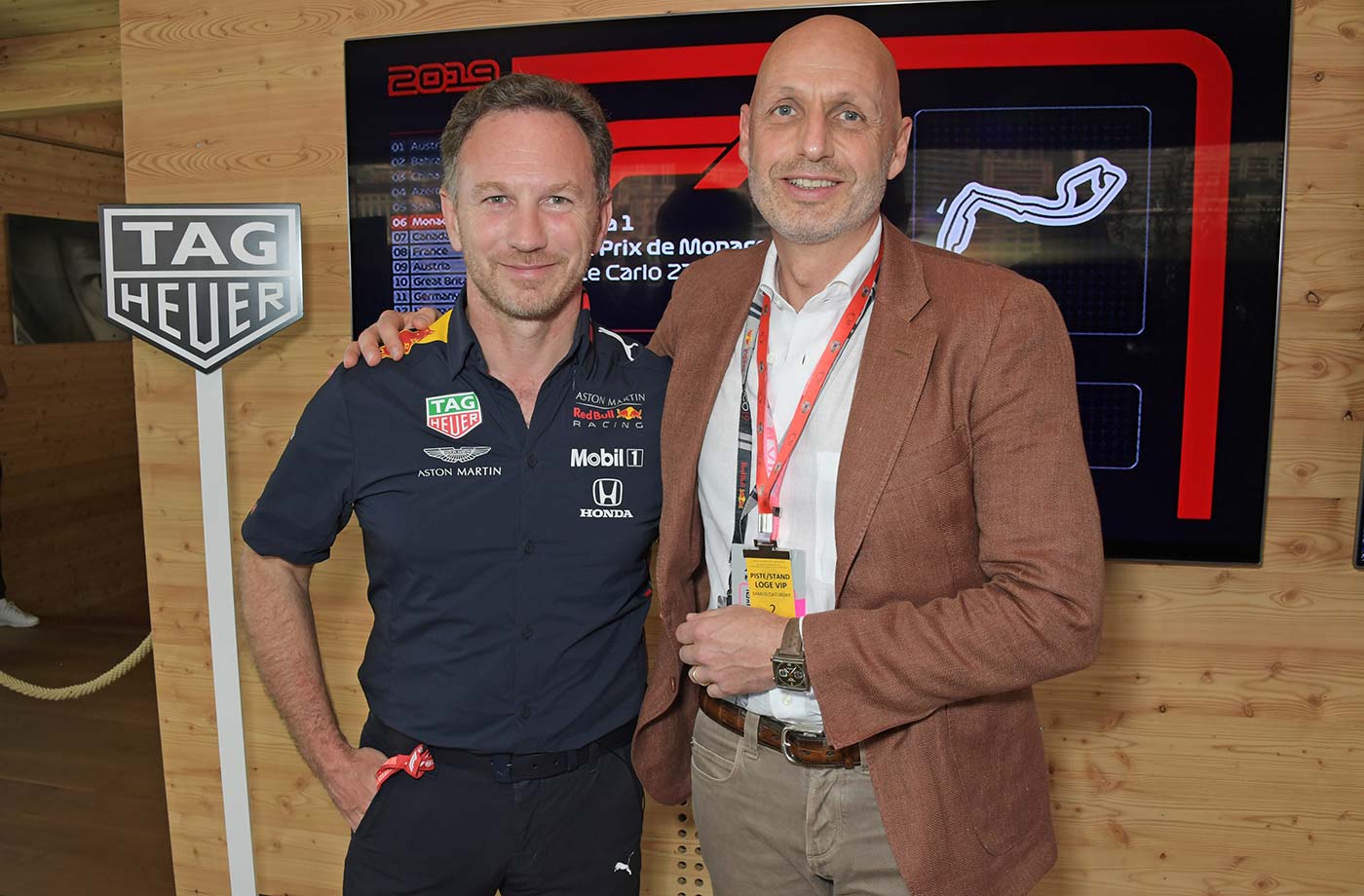 In honour of this milestone, it was announced that throughout the year, five creations will be successively revealed, inspired by the different decades from 1969 to 2019, and paying tribute to timeless design, enduring innovation and a style icon now more contemporary than ever.

The Monaco’s daring and iconic design has made it instantly recognisable. Every aspect of the Monaco timepiece design was radical, and went where no other watch had gone before in terms of design and technology. Not only was the TAG Heuer Monaco the first ever water-resistant square watch, it was also the first to feature an automatic-winding chronograph movement.

Since its debut, the Monaco watch and the Monaco Grand Prix, for which TAG Heuer has been the Official Watch since 2011, have had a strong connection – the most glamorous Grand Prix of the Formula 1 season gave its name to the TAG Heuer Monaco collection in 1969. No other place and location would therefore have been more suitable for celebrating the iconic timepiece’s 50th anniversary.

Taking over Monaco during the busiest weekend of the year, TAG Heuer unveiled the first Monaco limited edition at the beautiful Key Largo Villa, in the presence of Stéphane Bianchi, CEO of the LVMH Watchmaking Division and CEO of TAG Heuer and Frédéric Arnault, Chief Strategy and Digital Officer. They were joined by the rising star of the Aston Martin Red Bull Racing Team Max Verstappen, as well as Patrick Dempsey, Bella Hadid, Winnie Harlow, Kai Lenny and selected guests from all over the world.

Over the course of the exclusive three-day event, guests were granted access to some of the most prestigious and exciting events in Monaco, from a private tour of the Monaco Top Cars Collection museum including a retrospective of the Monaco timepiece, to a debrief of the Grand Prix qualifications with Christian Horner, Team Principal of the Red Bull Racing Formula One team. They also attended an exclusive party hosted on the TAG Heuer Yacht on Saturday evening with an exclusive performance by famous French DJ Bob Sinclar attended by Patrick Dempsey, Bella Hadid, Winnie Harlow, Jourdan Dunn, Kai Lenny and Jean-Éric Vergne. The event culminated on Sunday with VIP access to the coveted Formula 1 Grand Prix, for which TAG Heuer is the Official Watch. 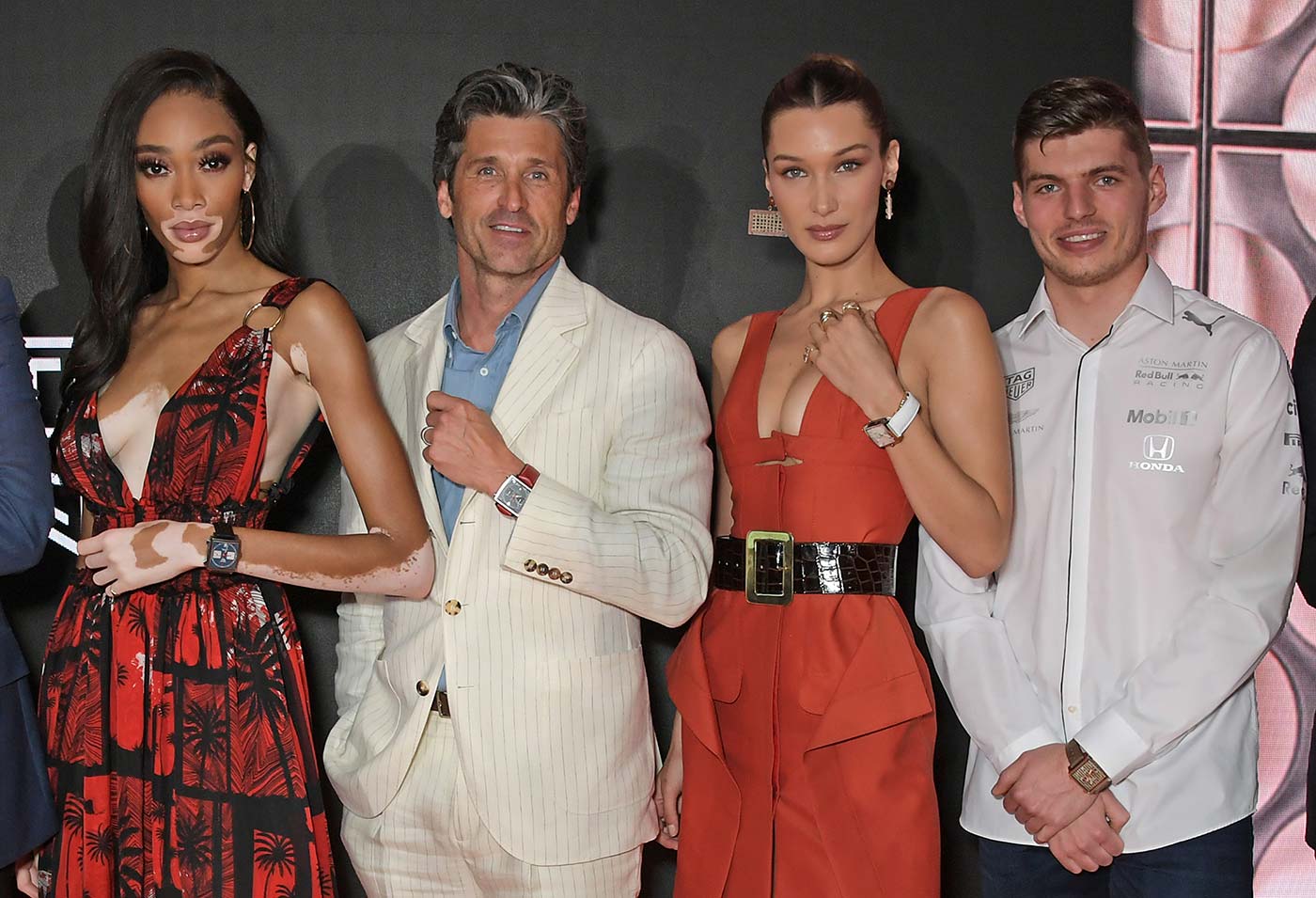 When the Heuer Monaco (TAG was not part of the company name at the time) was introduced at simultaneous press conferences in New York and Geneva on 3 March 1969, journalists and watch aficionados around the world were amazed. Every aspect of the watch’s design was radical, and went where no other watch had gone before in terms of design and technology. The Monaco’s daring and iconic design made it instantly recognisable, with its never-before-seen water-resistant square case.

This was the perfect complement to the advanced technology being presented by the Swiss watchmaker at the time. Developed and commercialised by Heuer, the Calibre 11 was the world’s first automatic-winding chronograph movement.

The CEO of Heuer at the time, Jack Heuer, believed that this groundbreaking innovation required a design that would demand attention. The Monaco did exactly that. A year after it was launched, the Monaco was seen on the wrist of brand ambassador and racing driver Jo Siffert, and in 1971 it shared the cinematic limelight with Steve McQueen in the movie Le Mans.

Already a collector’s edition and a tribute to the 1970s 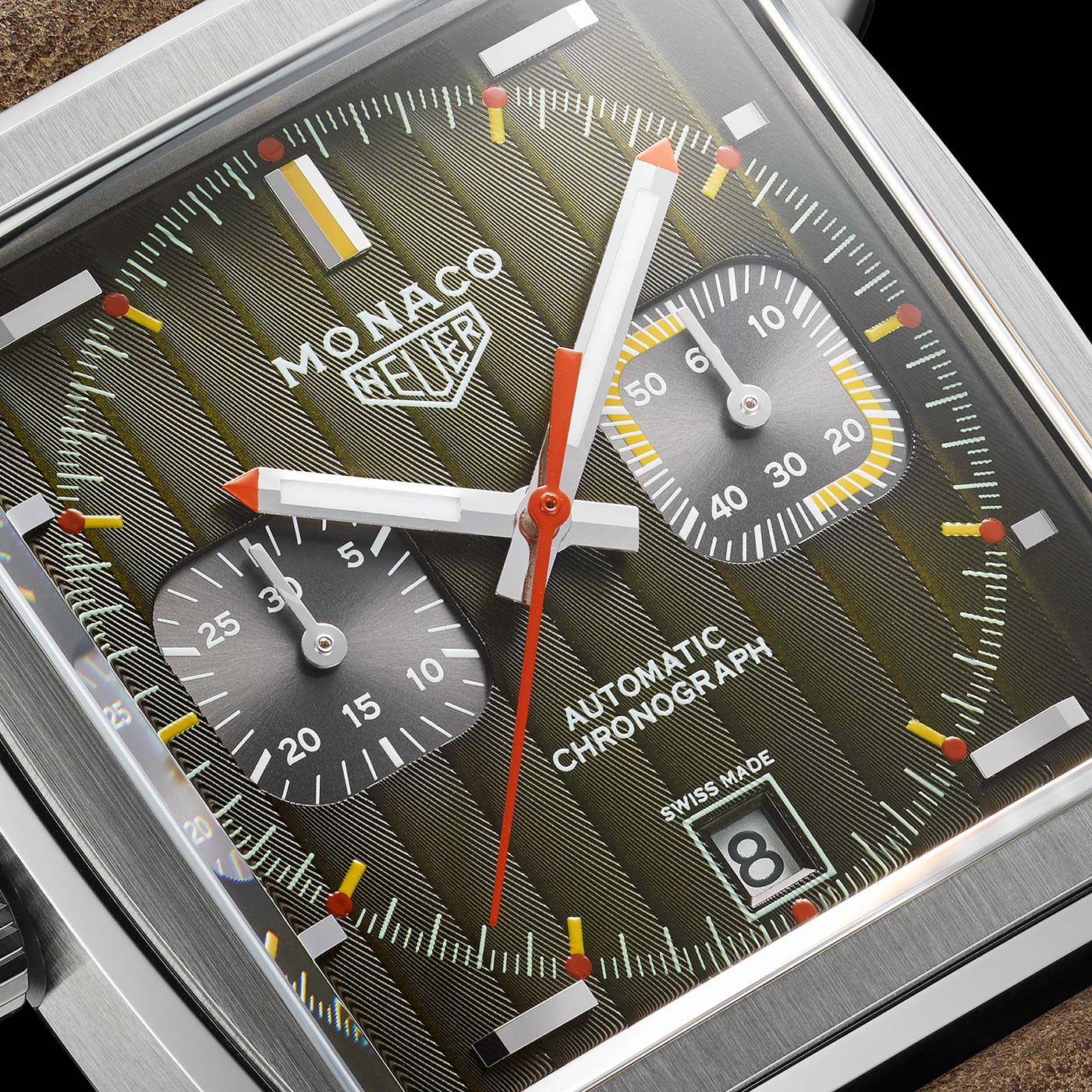 Highlighting the breakthrough and yet timeless design of the original Monaco, TAG Heuer created five new models inspired by the trends, colours and styles that characterised each decade of the Monaco’s half-century history. Emblematic geometric shapes and colours from the 1970s, combined with a timeless Côtes de Genève pattern are some of the features that distinguish the first model to celebrate the Monaco’s 50th anniversary.

Presented on a brown leather strap with holes lined in light brown, this stainless-steel timepiece has been produced in an edition limited to only 169 pieces. The green dial features brown and yellow touches and a Côtes de Genève finishing. The hands are coated with SuperLuminova®. Only a quick glance at the subdials and the position of the crown is needed to recognise this unconventional timepiece’s Monaco lineage.

The caseback of this 1970s-inspired timepiece is engraved with the original “Monaco Heuer” logo as well as “1969-1979 Special Edition” and “One of 169”. Beating inside the case is the renowned Calibre 11, a modern version of the automatic-winding chronograph movement that made its debut inside the original Monaco in 1969. 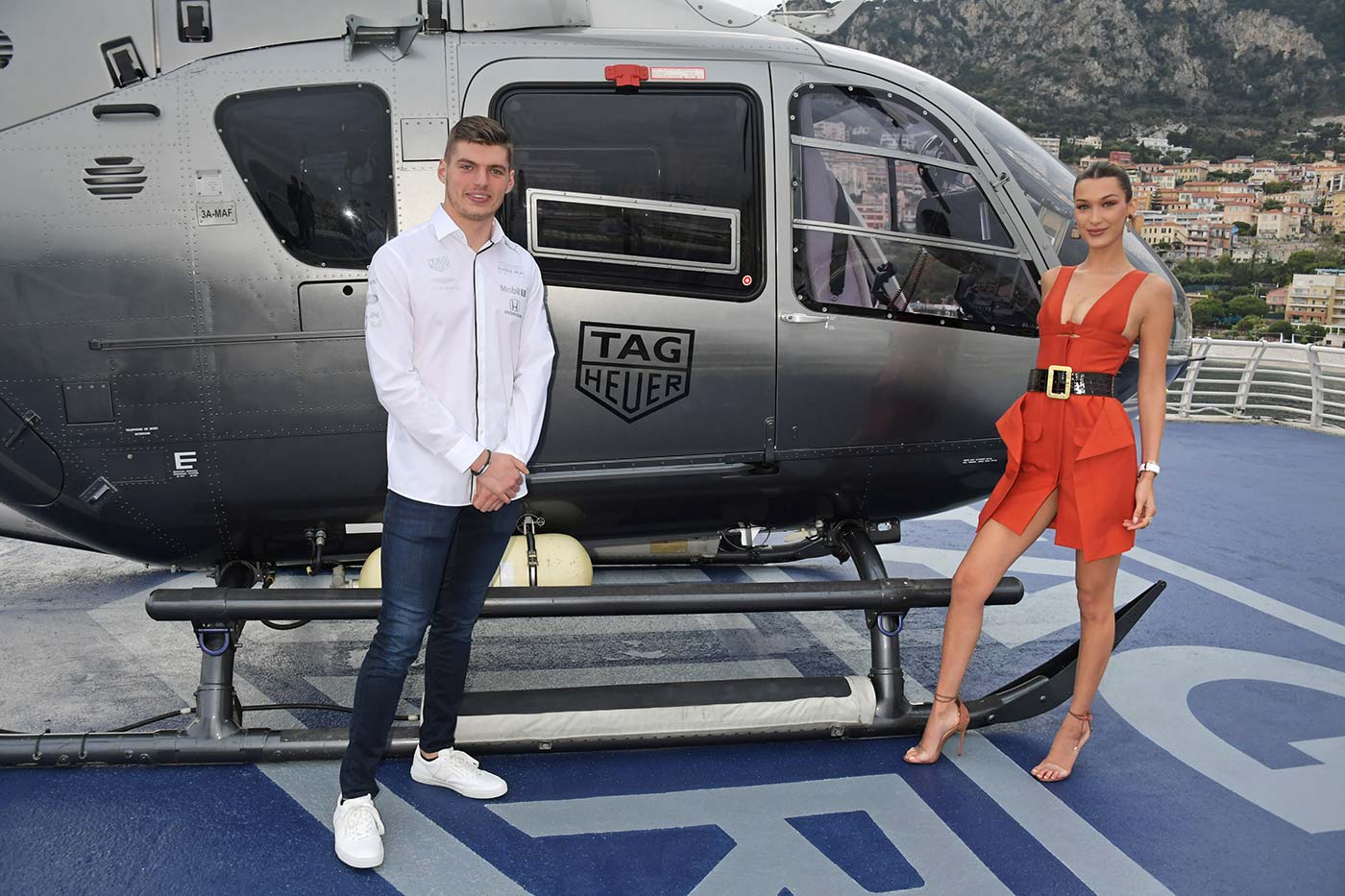 Over the past two decades, the Monaco has been closely linked to haute horlogerie with other versions that feature new complications, designs and materials. As it evolves, the Monaco still has the revolutionary spirit that made it both infamous and famous. The complete story behind this icon is told in the new book Paradoxical Superstar, which includes archive excerpts and sketches of the designs and movements. British author and journalist Nicholas Foulkes, watch expert Gisbert Brunner and American writer Michael Clerizo all contributed chapters that capture the heritage and innovation that define the Monaco. Underscoring the timepiece’s bond with its namesake city, H. S. H. Prince Albert II of Monaco wrote the book’s foreword.

No race or circuit of the Formula 1 calendar can truly match the excellence, glamour and challenge of the Monaco Grand Prix. From Casino Square to the world’s most famous hairpin, through the tunnel and past the luxurious yachts, Monte Carlo is a circuit of legendary corners full of history.

Extremely challenging for both teams and drivers, the narrow circuit through the glamorous streets of the Principality has been fuelling dreams in motorsports for decades. The tight circuit that offers almost no chance to overtake is extremely hard to master, and for some drivers winning the Monaco Grand Prix is even more prestigious than winning the World Championship.

In 2019 the Monaco Grand Prix will be doubly special as it celebrates its 90th anniversary since its first edition on 14 April 1929. In its 90 years this unique Grand Prix has established itself in the world of motorsports and set the scene for some of the craziest Formula 1 Grand Prix moments in history. Unexpected developments and strategies are the keywords of this prestigious mechanical rendezvous. Crashes at Sainte-Dévote, grip changes in the tunnel on rainy days, passing ever nearer the rail at the section with the swimming pool. The 78 laps and 19 turns push the pilots to the limits, all driven by one ambition: getting their name on the record of the Monaco Grand Prix on Sunday, 26 May 2019. 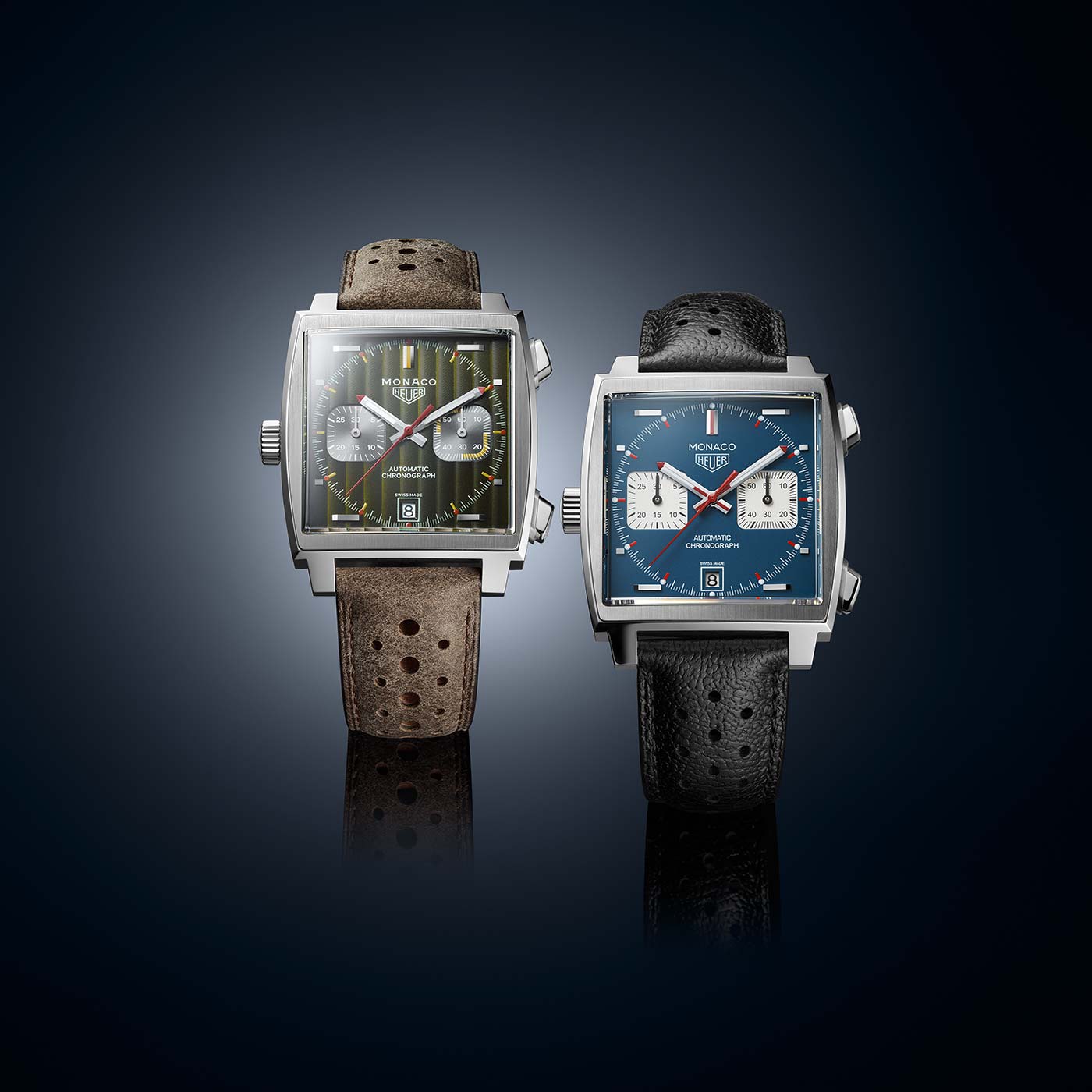 Chronograph with seconds and minutes; date, hours, minutes and small seconds at 3 o’clock

Like the watch itself, the watch box is also inspired by the original. Each of the special-edition models comes in a box with colours that match the watch and the decade it represents. The 1970s-inspired model is packaged in a dark blue box decorated with the Heuer logo and a horizontal chequer-pattern stripe. The watch is placed on a yellow cushion and surrounded by a green interior – the same colour found on the dial.

In 1860, at the age of 20, Edouard Heuer founded his watchmaker’s workshop in the Jura Mountains of Switzerland. Creating the Mikrograph in 1916, sponsoring Formula 1 teams in the 1970s or launching the
first luxury connected watch in 2015 are just a few examples of the major technical innovations, ultimate accuracy and passion for disruptive design that define our unique spirit. Headquartered in La Chaux deFonds, TAG Heuer operates in four production sites – mastering the whole watchmaking process – and is represented on all continents through 4,500 points of sale, including 170 TAG Heuer boutiques that are now directly available on www.tagheuer.com in selected countries. TAG Heuer timepieces are designed for those who love challenges. Our influence is enhanced by our unique communication based on three pillars: sport, lifestyle and heritage, embodying our legacy and DNA. Our partnerships and ambassadors illustrate our open-minded and open-door culture, with the most prestigious and avant-garde names teaming up with TAG Heuer: the Red Bull Racing Formula One team, the Formula 1 Monaco Grand Prix, the Formula E championship, the biggest football leagues in Europe, the Americas and Asia, Manchester United, trendsetter Cara Delevingne, and actors Chris Hemsworth and Patrick Dempsey.
#DontCrackUnderPressure is much more than just a claim – it’s a state of mind. Find out more at

Downloads
All press material can be obtained free of charge at https://presscorner.tagheuer.com/directlogin

Get Ready For Action

Can PatPat Become the SHEIN for Childrenswear? | Jing Daily

BACK TO HAVANA: ZENITH CELEBRATES THE 55TH ANNIVERSARY OF COHIBA CIGARS WITH A SPECIAL CHRONOMASTER OPEN