Tesla Vs. BYD: Which EV Giant Will Race Ahead In China? | Jing Daily 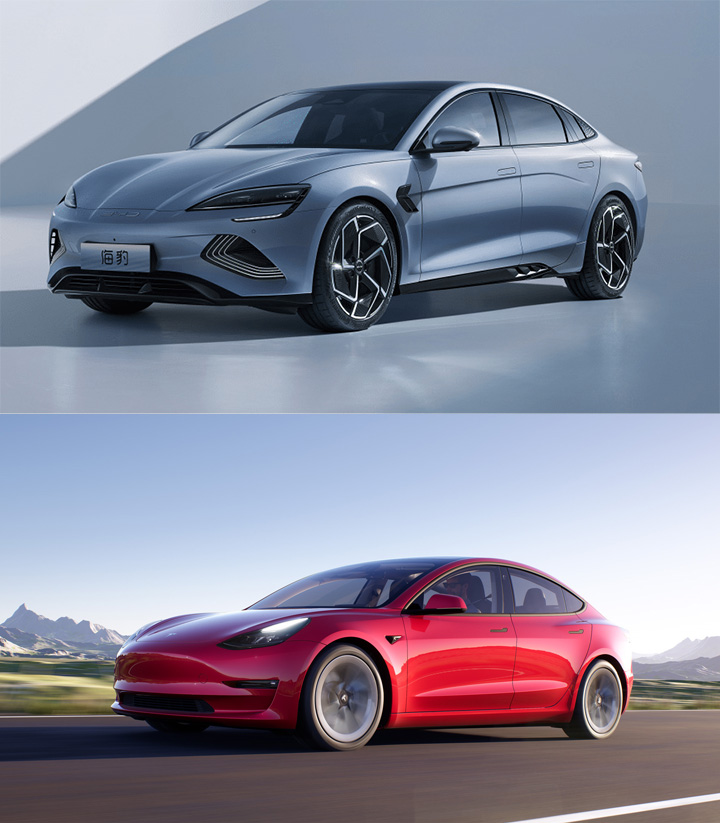 Tesla Vs. BYD: Which EV Giant Will Race Ahead In China? | Jing Daily

What Happened: Chinese automobile maker BYD, which stands for “Build Your Dreams,”  is accelerating into the premium car segment with the launch of two new luxury electric-vehicle models this year. On January 5, the Warren Buffet-backed company unveiled the Yangwang U8 sports utility vehicle and the U9 sports car, both priced at more than $145,000 (1 million RMB) and equipped with new in-house technologies.

According to BYD founder and CEO Wang Chuanfu, the Yangwang line “will reshape the contours of the global luxury car market,” putting the company on track to compete with the likes of Mercedes and Lamborghini. Both vehicles come with four electric motors that enable it to move sideways and perform 360-degree tank turns. The U8 off-roader also boasts a waterproof sealed body and can go from 0 to 62mph in just three seconds.

the crab walk quite astonished right?…
How can U8 do this?
– one of the core technologies in ‘Yisifang’ platform, four independently driven motors #Yangwang pic.twitter.com/SoF4ViccT3

The Jing Take: BYD Auto is starting off the new year as strongly as it ended the last. In 2022, BYD became the world’s top EV maker after selling a record number of vehicles in December, up 4 percent to 235,197 units, and ending the year with a total of 1.86 million units sold. Although the majority of BYD’s models are more affordable (retailing around $29,000), expansion into the high-end category now opens doors to a new consumer base — and competition.

These gains encroach on the market share of luxury rival Tesla, which has faced major roadblocks in the Chinese market recently. The American EV manufacturer sold around 56,000 cars in the country in December, a decline of 21 percent from a year earlier, and missed Wall Street’s quarterly estimates in the last three months of 2022. In total, it sold 1.31 million units in 2022, 29 percent fewer units than BYD. It didn’t help that the Gigafactory Shanghai — which produced more than half of all Teslas sold last year — was forced to shut down repeatedly due to the pandemic.

However, Tesla is trying to even the score by slashing its prices in China. This latest price adjustment — the second in three months — will put the Model 3 at $33,515 and the Model Y at $37,899, reduced by 13.5 percent and 10 percent, respectively. (As a comparison, the BYD Seal sedan, a competitor to Model 3, starts at $31,000.)  Although the news was met with protests from recent Tesla owners who paid the higher old price, the move has already resulted in longer wait times on Tesla’s China website, suggesting an uptick in demand.

The BYD Seal (top), a competitor to Tesla’s Model 3 (bottom), was released in August 2022 at a cheaper starting price. Photo: BYD, Tesla

But if Tesla wants to retake the lead in the world’s largest car market, it will need to go beyond price cuts. BYD not only has more competitive prices but also better control over its supply chain, and the ability to produce its own chips, batteries, and semiconductors. Plus, as the Chinese government stops providing subsidies for EV purchases, and consumers tighten their wallets amid the recession, analysts expect a plateau in the EV market which could stunt future sales.

Tesla may have started as the EV champion, but Chinese brands like BYD are right behind it gaining speed: Objects in the rear view mirror are closer than they appear.

How Do Italian Luxury Retailers Connect with China in 2022? | Jing Daily

In Photos: All your favourite faces at the 2023 Tatler Dining Awards