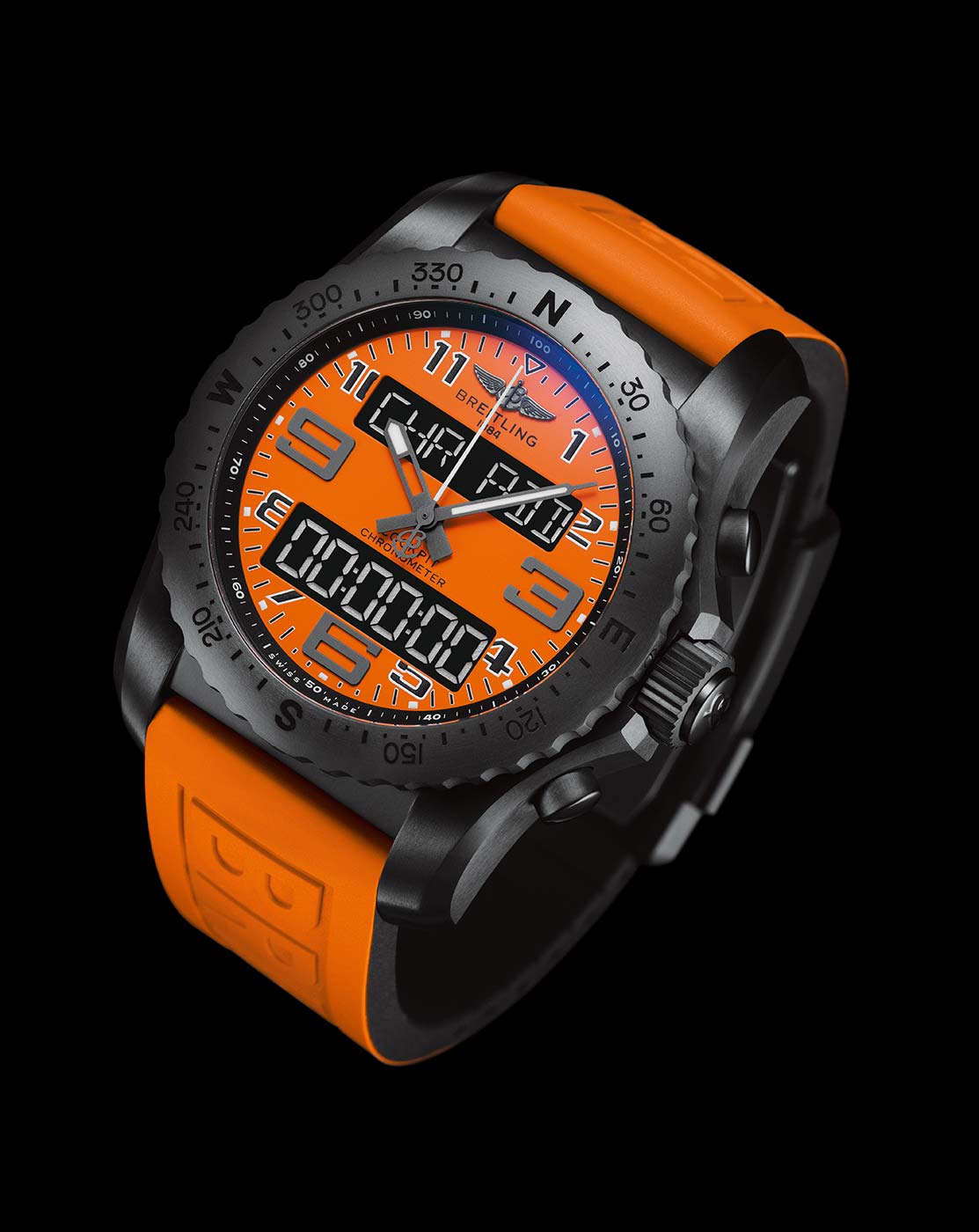 On March 21, 1999, balloonists Bertrand Piccard and Brian Jones safely landed their Breitling Orbiter 3 in a remote region of the Egyptian desert. In doing so, they became the first people to circumnavigate the globe non-stop in a balloon. Twenty years later to the day, Breitling – who sponsored the unique journey – will celebrate this incredible feat of human ingenuity with the Cockpit B50 Orbiter Limited Edition, a SuperQuartz™ timepiece with features worthy of a true scientific and aeronautical milestone. 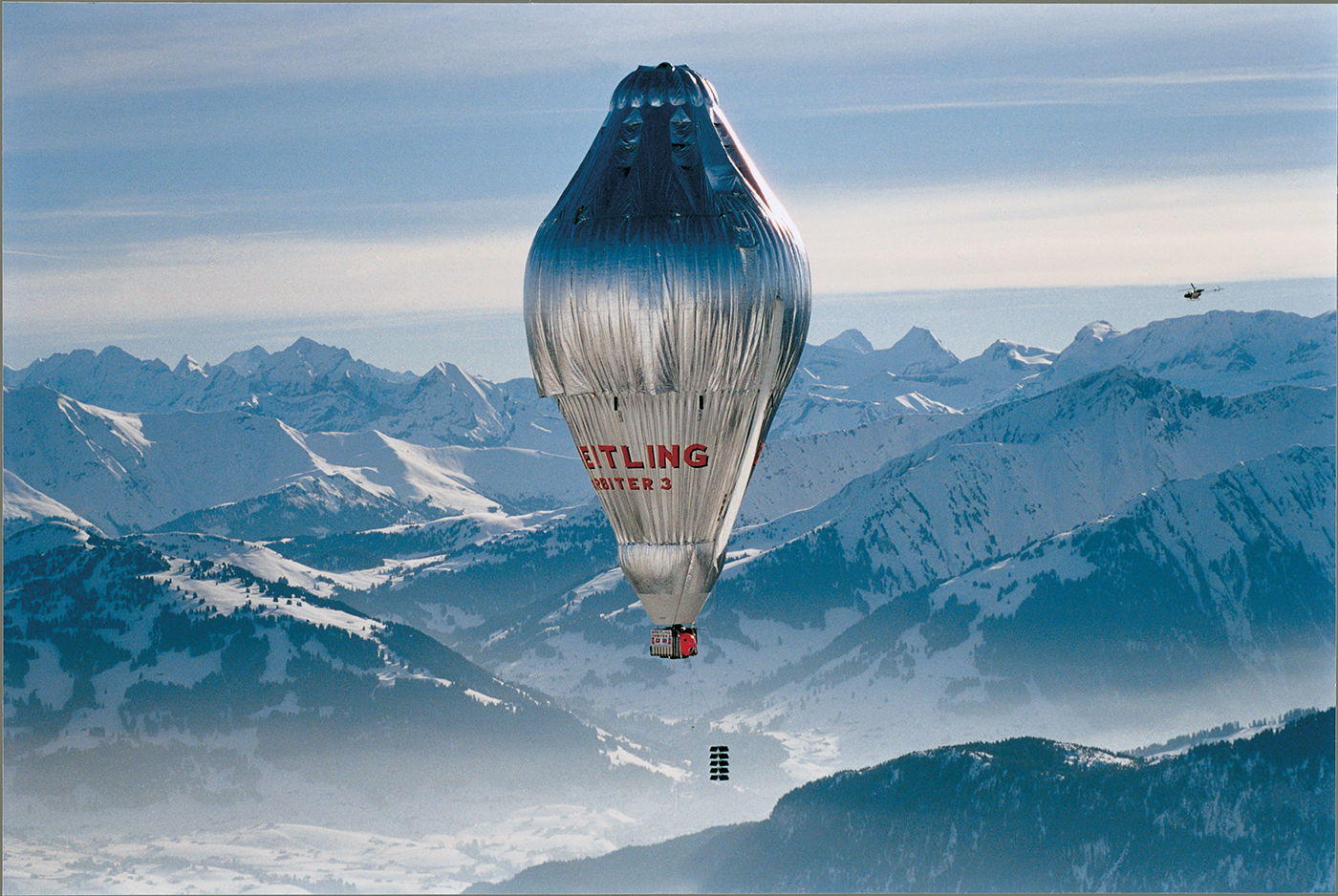 With the release of the Cockpit B50 Orbiter Limited Edition, Breitling celebrates the twentieth anniversary of the first non-stop balloon flight around the world.
It is appropriate that the feature-packed SuperQuartz™ watch will be launched on March 21, 2019, exactly 20 years after the Breitling Orbiter 3 set down in Egypt, completing a journey that had tantalized adventurers for centuries. Balloonists Bertrand Piccard and Brian Jones accomplished something widely thought
to be impossible. And on each pilot’s wrist was a Breitling Emergency.

Breitling CEO Georges Kern is proud of his brand’s historic link to the mission and of its ongoing partnership with Bertrand Piccard, who is a member of the
Breitling Explorers Squad and with the Solar Impulse Foundation: “Bertrand is an explorer of the first rank, and he is also one of the world’s true visionaries. He
always dares to dream big, and, with every challenge he undertakes, there is always a level of humanity. He inspires all of us and constantly strives to make the
planet a better place. We knew that we had to create a very special watch to honor him and the twentieth anniversary of the Breitling Orbiter 3.”

For Bertrand Piccard, the collaboration with Breitling combines friendship and loyalty. “When I started to dream of flying around the world non-stop in a balloon, Breitling supported me with passion. Now, 20 years later, we are still partnering through the Solar Impulse Foundation to create solutions for a better quality of life on this planet. Therefore, the new Cockpit B50 Orbiter Limited Edition is not only celebrating the twentieth anniversary of the Breitling Orbiter 3, it is projecting us into new dimensions to explore.”

Circumnavigating the globe in a balloon was considered as the final great adventure of the twentieth century. In total, ten teams of prominent personalities tried 21 times to reach this Holy Grail. Bertrand Piccard himself failed twice in 1997 and 1998 before attempting the third flight with Brian Jones. The balloonists successfully landed in the Egyptian desert on March 21, 1999, after traveling 45,755 km in 19 days, 21 hours, and 55 minutes, thus achieving the longest flight in the history of aviation in terms of both distance and duration.

The Ultimate Wristwatch for Visionaries and Adventurers 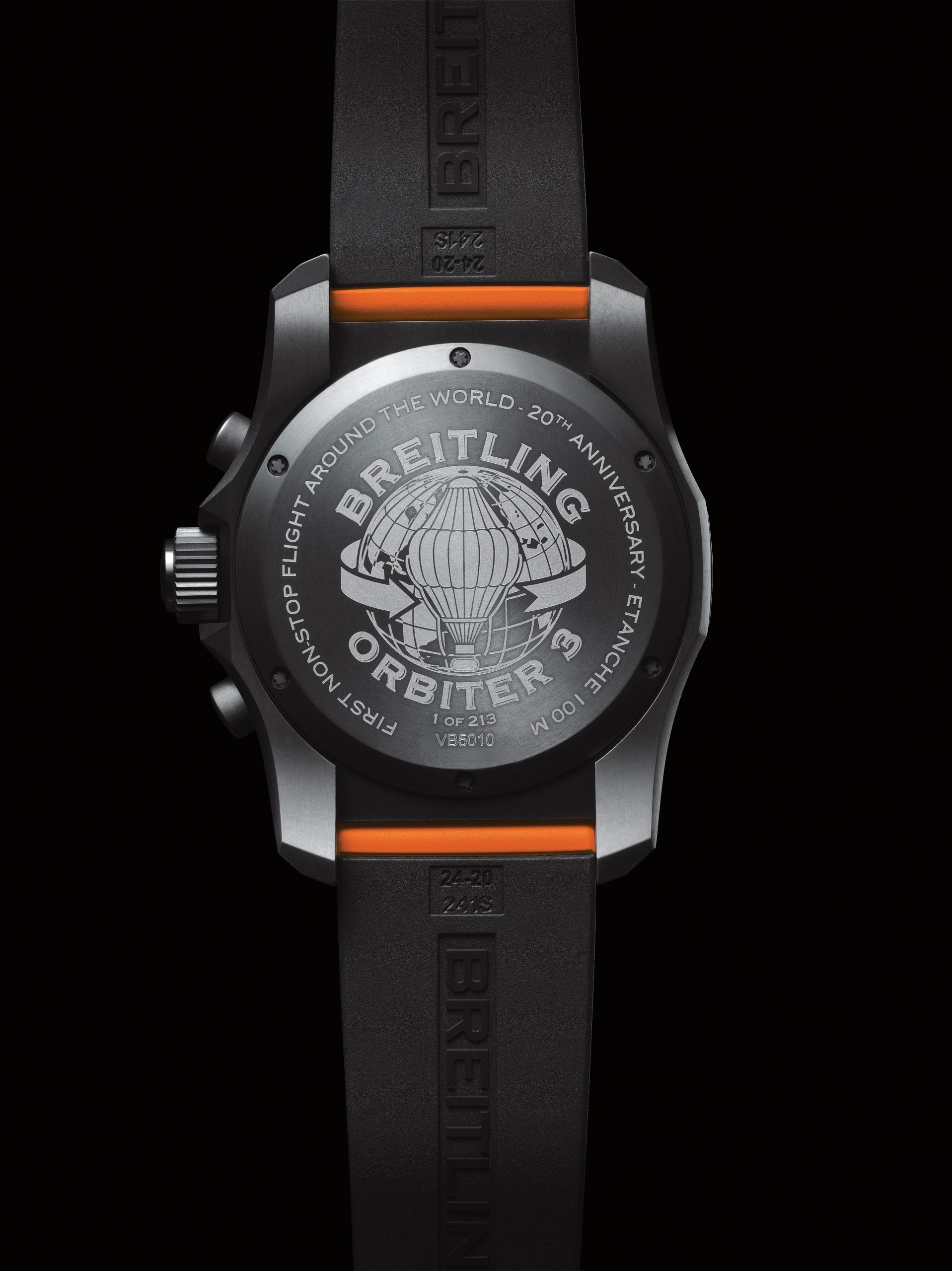 The Breitling Cockpit B50 Orbiter Limited Edition has been crafted from striking black carbon-coated titanium and is limited to 213 pieces, a number chosen to commemorate the date the Breitling Orbiter 3 landed in Egypt – 21.3. – 20 days after it had taken off from Château-d’Œx in the Swiss Alps.

Presented on an orange rubber strap with a folding clasp and featuring an orange dial, the Cockpit B50 Orbiter Limited Edition will stand out in any crowd. The numerals, indexes, and hands are coated with luminescent Super-LumiNova®, which makes them legible in any lighting conditions.

On its distinctive screwed titanium caseback are an image of a balloon superimposed on a globe and the words “BREITLING ORBITER 3”. Around its perimeter is the legend, “FIRST NON-STOP FLIGHT AROUND THE WORLD – 20TH ANNIVERSARY – ETANCHE 100 M” as well as the limited-edition number (1 OF 213).

The watch is powered by the Breitling Manufacture Caliber B50: a thermocompensated SuperQuartz™ analog and digital display movement designed
in-house that delivers ten times the accuracy of a standard quartz watch. The Cockpit B50 Orbiter is a COSC-certified chronometer that includes functions
that will prove particularly useful even on the most extreme missions.

In addition to the chronograph with split-time and flyback capabilities, this model features a second timezone display, a perpetual calendar, two alarms with buzzer and/or vibrate mode, a lap timer function and a countdown complete with its own alarm.

And that is only the beginning. The Cockpit B50 Orbiter is equipped with an electronic tachymeter, a countdown/count-up system, and a chrono flight device,
which records flight times by memorizing departure and arrival times as well as the date.

Another special feature is the Cockpit B50 Orbiter’s use of Coordinated Universal Time (UTC), which enables the watch to ensure the smooth juggling of timezones for frequent travelers. This function can also be used to switch between the time displayed by the hands and that of the second timezone shown on the screen simply by pressing a pusher, with the system automatically taking account of a potential date change.

The Cockpit B50 Orbiter has numerous other functions and features – the ones presented here are just the beginning –, but it is particularly user-friendly, with
an intuitive, logical, and consistent control system, featuring function selection via crown rotation and activation/deactivation with its two pushers. This
impeccable user-friendliness is complemented by the interface messages appearing on the screens to guide the user through the various operations.

When the definitive history of scientific achievement of the twentieth century is written, it will include a chapter about two pilots circumnavigating the globe in
a balloon. The Breitling Orbiter 3 flew from the past – after all, ballooning around the world was one of mankind’s early flying dreams – into the future. And a
stunning high-tech chronograph whose black titanium case offers a stark contrast to its orange dial and strap is a perfect way to celebrate that mission.

Since 1884, Breitling has established a global reputation for high-precision timepieces, its pioneering role in the development of the wrist chronograph, and its uncompromising commitment to design excellence. With the brand’s storied association with aviation, Breitling has shared the finest moments in humankind’s conquest of the skies. Renowned for its spirit of innovation, it has also earned a place of privilege in the worlds of science, sport, and technology. Breitling manufactures its own movements inhouse and the quality of every watch is confirmed by its status as a COSC-certified chronometer, made in Switzerland.

It is in Bertrand Piccard’s DNA to achieve the impossible. As part of a legendary dynasty of explorers and scientists who conquered the heights and depths of our planet, he made history by accomplishing the first ever non-stop around-the-world balloon flight on board the Breitling Orbiter 3. With a vision to demonstrate the immense potential of renewable energies, he then initiated the Solar Impulse challenge and circumnavigated the globe in an airplane powered only by the sun. Being a pioneer of clean technologies, his goal is now to select 1000 economically profitable solutions to protect the environment. With his dual identity as a doctor and a serial explorer, Bertrand Piccard has become an influential voice as a forward-thinking thought leader for progress and sustainability.

FACTS ABOUT THE WATCH: 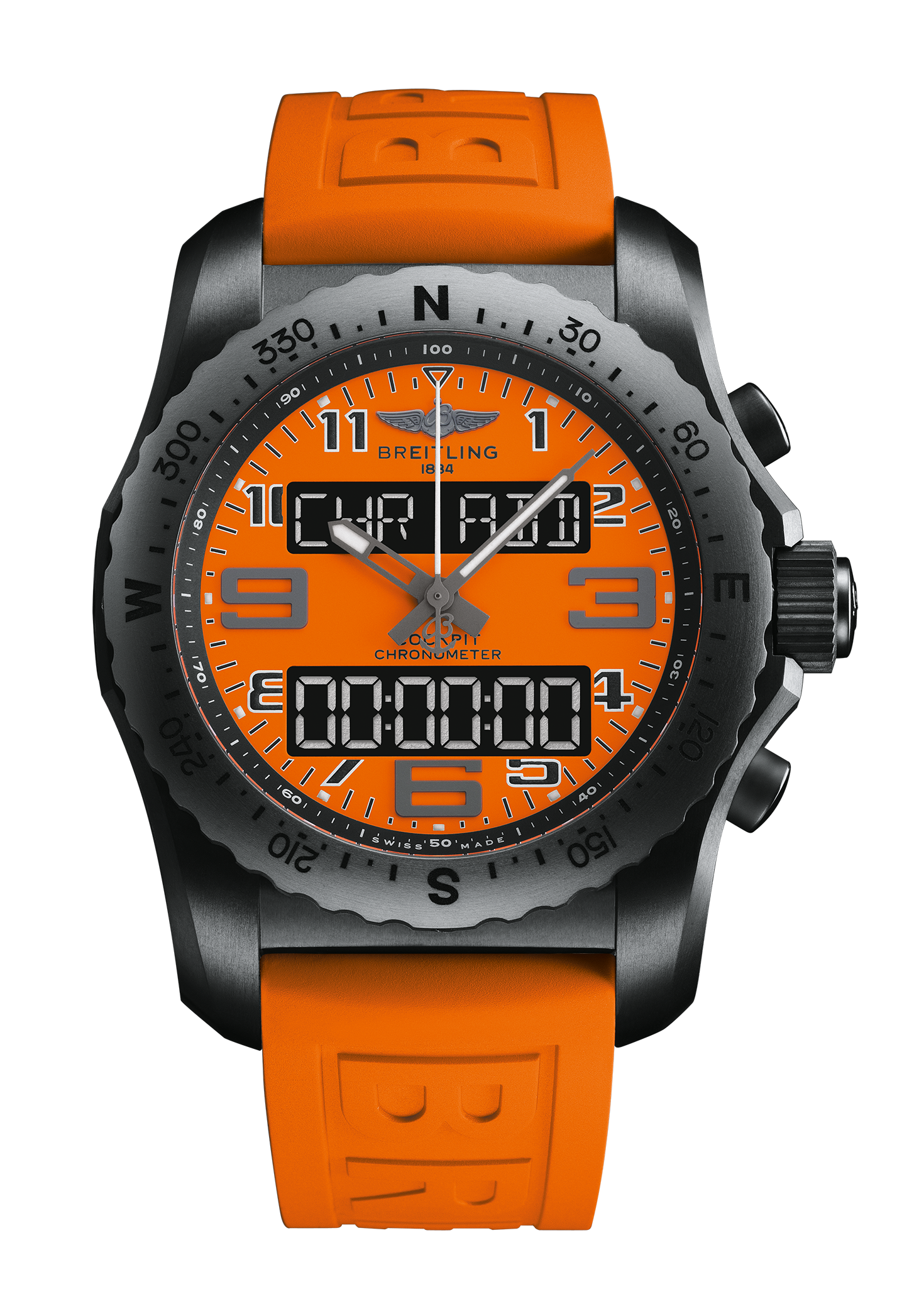 All press material can be downloaded free of charge at
press.breitling.com/cockpit-b50-orbiter

Are human traits stopping us from achieving peace?

The Wish List: Let The New Bohemian Be Your Style Inspiration This Week