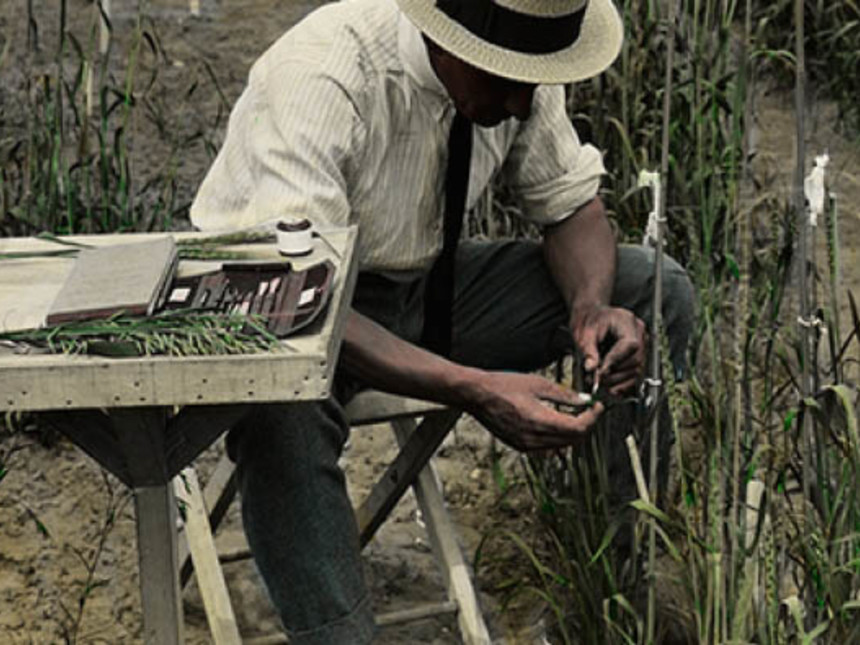 The Canadian Agricultural Hall of Fame honours men and women who have made outstanding contributions to Canada’s agriculture and food industries. Located in Toronto, the Hall of Fame was established in 1960 and is open annually during the Royal Agricultural Winter Fair. Thanks to our donors, the Canada Agriculture and Food Museum will recognize selected Hall of Fame members each year. This year, theme is wheat rust prevention, focusing on cereal production and ongoing efforts in the early 20th century to find solutions to this perennial problem.

Rust is a plant disease that affects grain — including wheat, Canada’s most important crop. Rust is an airborne disease that weakens stems and leaves, reducing yields. Caused by several related species of fungi (Puccinia spp.), rust flourishes during wet weather. Since the mid-19th century, Canadian farmers and plant scientists have worked to develop rust-resistant wheat. This work continues as new strains of rust emerge to threaten grain crops. These Hall of Fame members demonstrate early efforts to confront the challenge of wheat rust in Canada.

David Fife was nominated by the David Fife Memorial Society, and was inducted in 1963.

Wheat rust was well known to 19th-century Canadian grain farmers. In the 1840s, Peterborough, Ontario farmer David Fife (1805–1877) began searching for rust-resistant varieties of wheat. In 1842, Fife secured seeds of a disease-resistant wheat from Eastern Europe. He grew and distributed this variety, which was named “Red Fife” in his honour. In the 1880s, it was planted across Western Canada, which became a major wheat-growing region following construction of the Canadian Pacific Railway.

The railway brought many settlers to the West, including Dr. E. Cora Hind (1861–1942). Hind was born in Toronto and emigrated to Winnipeg in 1882. She found work as a stenographer for farm organizations, and acquired first-hand knowledge of western farming. In 1901, the Winnipeg Free Press hired Hind as its first agricultural editor. An early feminist working in a male-dominated profession, Hind gained a reputation for crop-forecasting. She accurately predicted the impact of rust on western wheat harvests, curbing market speculation. While Canadian farmers benefited from Hind’s forecasting, rust continued to evolve and affect previously resistant varieties, including “Red Fife.”

Dr. Charles Saunders was nominated by the Canadian Seed Growers’ Association, and was inducted in 1961.

Dr. Cyril Goulden was nominated by the Agricultural Institute of Canada, and was inducted in 1979.

Dr. Cyril Goulden (1897–1981) addressed the challenge of rust as a plant scientist. After a severe rust outbreak in 1916, the Canadian government established the Dominion Rust Research Laboratory. Goulden led the lab, which opened in Winnipeg in 1925. Over the following decades, Goulden worked with other scientists to develop several promising rust-resistant varieties. In the early 1950s, a new strain of rust caused severe losses in Western Canadian wheat, except in one variety, “Selkirk,” developed during Goulden’s tenure as chief cereals scientist. Under Goulden, Canadian researchers advanced knowledge of rust-resistance genetics — work that continues to this day.