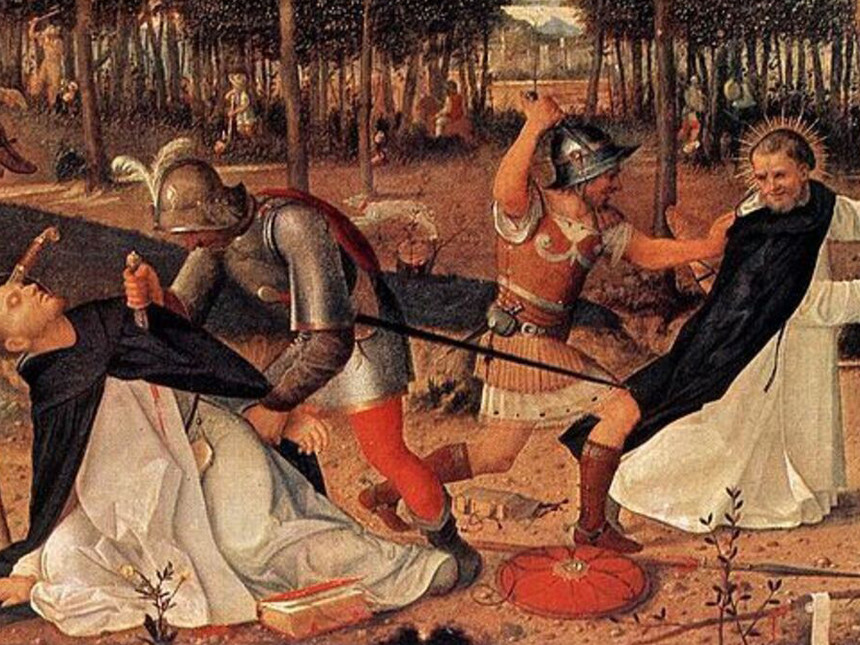 The Cathar castles of southern France, situated mostly in Languedoc, near Toulouse, and Albi and Carcassonne, are among the most fascinating in France. For an effective visit, knowledge of the Cathar religion itself towards a better understanding of the events that have taken place is needed. In addition, to better evaluate the stories of bravery and persecution that surround them, a draft analysis is necessary.

Catharism had been a dualistic or gnostic Christian movement arriving in southern France from the Balkans between the 11th century and especially in the Languedoc region. The popularity of the Cathars in France was at least partially a response to the exaggerations and excesses of the Roman Catholic Church. Both farmers and nobles – maybe 10% of the population were supporters of the Cathar “religion”.

Their doctrines were similar in many respects to those of Bogomils and Paulicians. What really happened out there?

In the Balkans at the end of the 10th century, a Christian group known as “Bogomils” emerged. Through Bogomil, a Bulgarian priest, meaning “dear to God” they targeted the prevailing Christianity of the time and proclaimed a belief in a dualistic form. He preached on a world highly divided among the forces of good and evil. The Slav rural population in parts of Bulgaria was probably the first in closer contact with Bogomilism and the young Bulgarian church was aware of the danger. The Bogomils started spreading westward and settled in Serbia, where they were to be called Babuns. The most active region became West Bosnia, centered in the valley of the Bosna River.

An important transmission of rituals and ideas from Bogomilism to Catharism was achieved with this interpretation of Christianity spreading quickly throughout medieval Europe. The spread of their ideas influenced strongly the local populations with the Cathars becoming the most popular sect in the Christian world in the twelfth century. But soon accused of being heretics by the Catholic authorities.

The Cathars and Bogomils both believed in the saving power of Jesus Christ, emphasizing a radically dualistic view of the world. They believed our world is based on a struggle between good and evil or right and wrong. The Cathars believed that God in the New Testament was the good God, creator of the spiritual realm and of the pure (Cathar). On the other hand, God in the Old Testament was the evil God (Satan), creator of the physical world. Absolute dualism has led to the simultaneous existence of good and evil and that have always existed together. The Catholic Church has opposed this assertion of such a view as antithetic to monotheism, a fundamental principle that there is only one God.

But the idea of two deistic gods or principles, one good and another evil, proved to be a critical point by the Catholic Church.

The Cathars also believed that human spirits were no more than the sexless spirits of angels, but trapped in this material world ruled by the evil god. Cathars believed that everyone would be reborn repeatedly until they committed themselves to the self-denial of the material world.

Cathar practice focused on antimaterial asceticism different from the main Christianity on certain doctrinal issues such as marriage and, sex, which led to the religious authority of women. They were permitted to perform priestly duties such as hearing confession, absolving people of their sins, and conducting community prayers. The initiatory ritual known as Consolamentum, or spiritual baptism, was open to men and women. Both could deliver it.

The material world was looked upon by the Cathars as the evil created by Satan. It also led them to believe that sexuality plays a significant role in separating the soul from its true nature. Their refusal to marry was a repudiation of sexual relations. They also refused to eat what they considered to be sex-generational products. That included eggs, meat, and most dairy products. Cathars also withdrew from worldly matters like war, politics, and oaths.

The equality with which women participated in the Cathar ritual may indicate that Catharism has not embraced traditional notions of gender. The same is true for marriage and gender. The Cathars viewed gender distinctions as a by-product of the unhappy material embodiment of the soul. They believe that these distinctions do not reflect the true nature of the soul. Therefore, gender classes and gender rules and restrictions have not had any impact on Cathars. The Cathars attributed more importance to the role of Marie-Madeleine in the diffusion of the first Christianity than before. In reverence for John’s Gospel, the Cathars regarded Mary Magdalene as perhaps even more important than St Peter.

The few Cathars who actually followed the specific prohibitions formed an elite group known as Perfecti, “The Perfect” among them many women. Because of their belief, the Cathars considered women equally capable of being spiritual leaders.

It must be emphasized that the Cathar understanding of creation and the fate of humanity have many common features with Gnostic mythology and especially Manichaean.

A Council, held in 1167 at St Felix Lauragais, was a milestone in the “institutional history” of the Cathars. The council was attended by numerous local personalities and also by Papa Nicetas probably the ex-bishop of Bogomils of Constantinople, and later the Cathar bishop of (North) France. They say the objective was to strengthen the dualistic beliefs of the Cathars in those regions.

However, the Cathars had many problems with their religious opponents. In 1147, Pope Eugene III sent a legate to the Cathar region to stop the progress of the Cathars. But things worse obliging in 1208 the Catholic pope to undertake a crusade against the Cathars. This crusade, known as the “Albigensian Crusade”, lasted twenty years and decimated the Cathar community. In 1215, the bishops of the Catholic Church met at the Fourth Lateran Council under Pope Innocent III with the program of fighting the Cathar heresy.

On January 15, 1224, Armaury de Montfort achieved a semblance of normality in the area. But the new king of France, Louis VIII, saw it as a chance to take control of the lands of the south.

With the support of the new Pope, Honorius III, a further crusade was launched in May 1226. Towns like Beziers (22 July 1209) were besieged. After the successful siege of Carcassonne, which followed the massacre of Béziers in 1209, Simon de Montfort was appointed head of the Crusader army. The official war ended with the Treaty of Paris (1229), by which the king of France dispossessed the House of Toulouse and the house of the Trencavels. The independence of the Cathar women of Languedoc came to an end.

Despite their massive massacre during the war, Catharism was not yet extinct, and Catholic forces would continue to pursue the Cathars. This resulted, after many decades of harassment and re-proselytizing, in the systematic destruction of their religious texts. The exhausted and worn-out sect could not find any more followers. At the foot of the Pyrenees, the Cathar leader Peire Autier was arrested and executed in April 1310. Finally, Guillaume Bélibaste, the last complete Cathar known in Languedoc, was arrested and executed in 1321.

But at this point, a question appears. The Cathars as we know have been defeated, but what happened to their descendants?

There is no clear answer to the question, but many suspect that whatever remained from the long conflict would probably have formed dynamically dangerous sleeper cells seeking revenge for their defeat. Many incidents and stories have been examined revealing a possible Cathar presence in France. But one of them surprisingly caught our interest. It was the assassination of the French foreign minister and not only before the second world war. We had to do with the story of the famous double assassination in 1934 in Marseille.

In the Balkans, the Bogomils (Cathar associates and mentors) were transformed but did not change their original hostile objectives against the Byzantines and Macedonians. In the city of Bogomila, their spiritual capital, near the town of Veles, their priest Arso ordered his son Peter to create the successor body of Bogomilism. Indeed, Peter Poparshov and his friends founded the VMRO (a Bulgarian revolutionary organization) as the secret successor of Bogomilism.

Things stayed so until King Alexander of Serbia before WWII scheduled a visit to France arriving at Marseilles as his first stop. It was his intention to meet with the French authorities to accommodate things. But the remnants of the Cathar sect in south France needed revenge. Their target was specified and the plot outlined, but the assistance of brother Bogomilism in the Balkans was needed. Their siblings in the Balkans VMRO (Bogomilism successor) responded with pleasure sending Vlado Chernozemski as the executioner.

How true is that story, we don’t know yet.

A 1935 ballistic report on the bullets revealed that the French minister Barthou had not been hit by Vlado Chernozemski’s pistol.