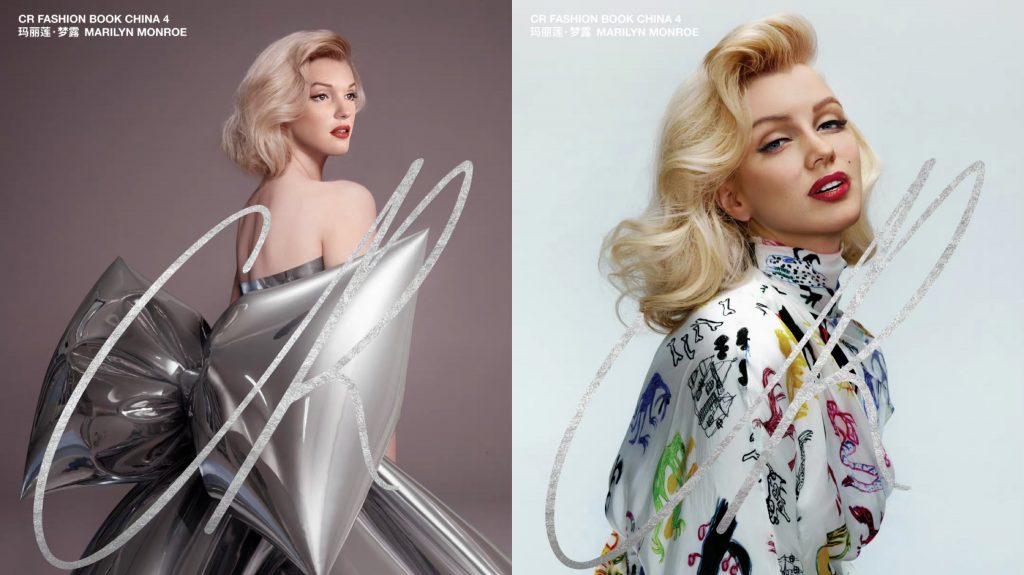 What Happened: On June 22, the newest cover series for CR China Issue 4 debuted on Weibo. Using cutting-edge CGI imagery, it shows an uncanny valley representation of iconic actor Marlyn Monroe dressed in contemporary designs — including clothing from Thom Browne, Miu Miu, and Fendi. Following the print debut, the eight cover images will be minted as NFTs and made available through Web3 startup Amethyst’s digital platform.

In China, influential fashion accounts @mrjiliang and @baidaxingjun as well as niche blogger @fashion_mok have all published content about the cover on Weibo, while #Monroe reappears in the metaverse# and #CR Marilyn Monroe China Cover# have 100,000 and 320,000 views, respectively.

The Jing Take: Even though it’s been 60 years since the death of the Hollywood star at age 36, Monroe (or 玛丽莲梦露) is still as recognizable as ever, not least in China. And she has been firmly back in the headlines recently, chiefly thanks to Kim Kardashian. The Balenciaga favorite wore the actor’s legendary “Happy Birthday” dress for four minutes on the Met Gala’s red carpet — which allegedly damaged the historical garment. Some such as industry watchdog Diet Prada were quick to call this out. Between June 16-20, the Weibo hashtag #kim kardashian# received over 10 million views with nearly all related posts discussing the celebrity’s reported damage; #kardashian wore out monroe’s antique dress# has nearly 100 million views on the platform so far.

Both Kardashian’s stunt and CR China’s covers raise pertinent issues about consent and ownership in a digital age. This is an era where celebrities may profiteer from appearing in a dead woman’s clothing (a cultural relic) — regardless of the impact.

Now it is Monroe’s body itself that is up for grabs. It is hard not to feel uncomfortable about the digital exhumation of a woman, one who can have no agency about how she is to be dressed, stood, photographed, looked at. Preternaturally preserved in the metaverse, this is a person who once declared: “I want to grow old without facelifts.”

@Jessica陈嘉伦, who is the publisher for Roitfeld’s tome, explained in a post that the project had taken eight months and had support for the restoration from the entertainment company that owns Monroe’s estate, Authentic Brands Group. But the low engagement shows it has hardly had the desired impact on the mainland.

There are innumerable ways to celebrate her legacy: her work, her radical politics, her activism. She was not just a pretty face. The potential of the metaverse is enormous, and it’s a shame that while our technology has moved on, our ideas are still stuck firmly in the past.

Architecture in a metaverse: designing in the new dimension