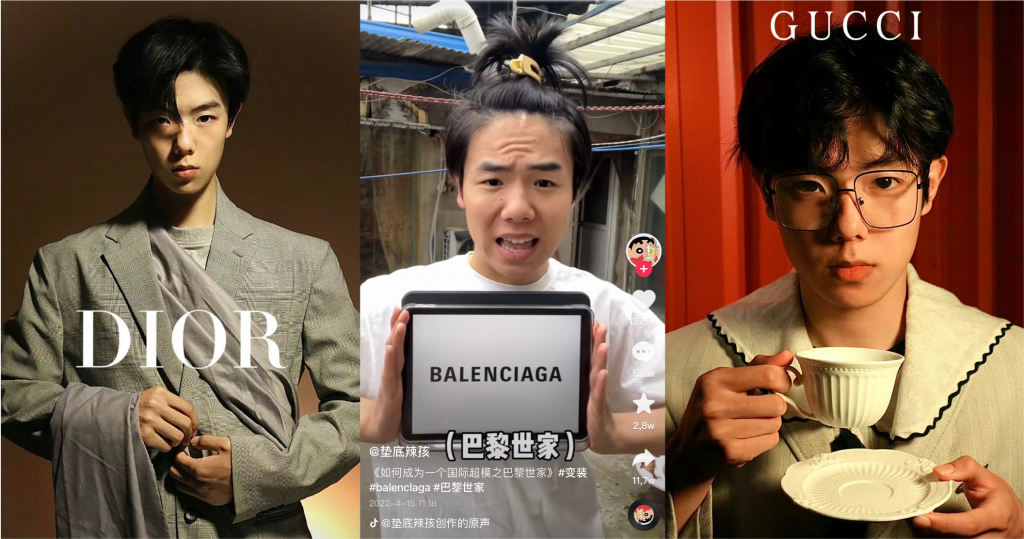 What happened: Over the last month, the Douyin KOL @diandilahai 垫底辣孩 has seen his popularity skyrocket thanks to his fun, witty videos that pay homage to luxury houses. The “little fresh meat” influencer now has more than 7.26 million followers, with over 5 million of these gained in the last month alone. His newfound fame has been building since April when he started creating content that recreated luxury brands’ campaigns from items lying around his house and village.

So far, he has emulated looks from the likes of Prada, Dior, and Balenciaga, all from what’s available in his own wardrobe. The Saint Laurent video has 2.87 million likes, followed by Chanel’s at 2.51 million and Celine’s at 2.35. His short video series “How to become an international model” has been viewed more than 500 million times.

The Jing Take: What on the surface might look like a frivolous trend is in fact a very telling note of many low-tier consumers’ relationship with luxury. What’s powering the interest — and initiating countless copycats — is not only his good looks but the rural setting of these humorous videos. @diandilahai 垫底辣孩’s IP is registered in Anhui, a province in the East of China, which is one of the country’s most undeveloped areas.

The intense contrast between the high fashion and the provincial background is powerful. Satirical? Yes. It’s this disconnect that creates the wonder — and the humor — of the final transformation. But there’s also an aspirational element in how it leaps the gaps of capital and place via the tradition of a video “glow up.” Both of these should be understood within the context of recent price hikes to luxury — not to mention the recent class division of consumers by a certain brand.

So far, the Douyin star has already collaborated with a number of domestic labels while many others are using his account for engagement. Florasis, bubble tea firm Mixue Bingcheng, and Hongxing Erke have all received impressive traffic on their comments (the latter’s received 21,000 likes). International names are lining up, too. So far he’s worked with Giorgio Armani and Lancôme.

A Two-pronged Approach for Emperador inc. and its Brandy and Whisky Brands