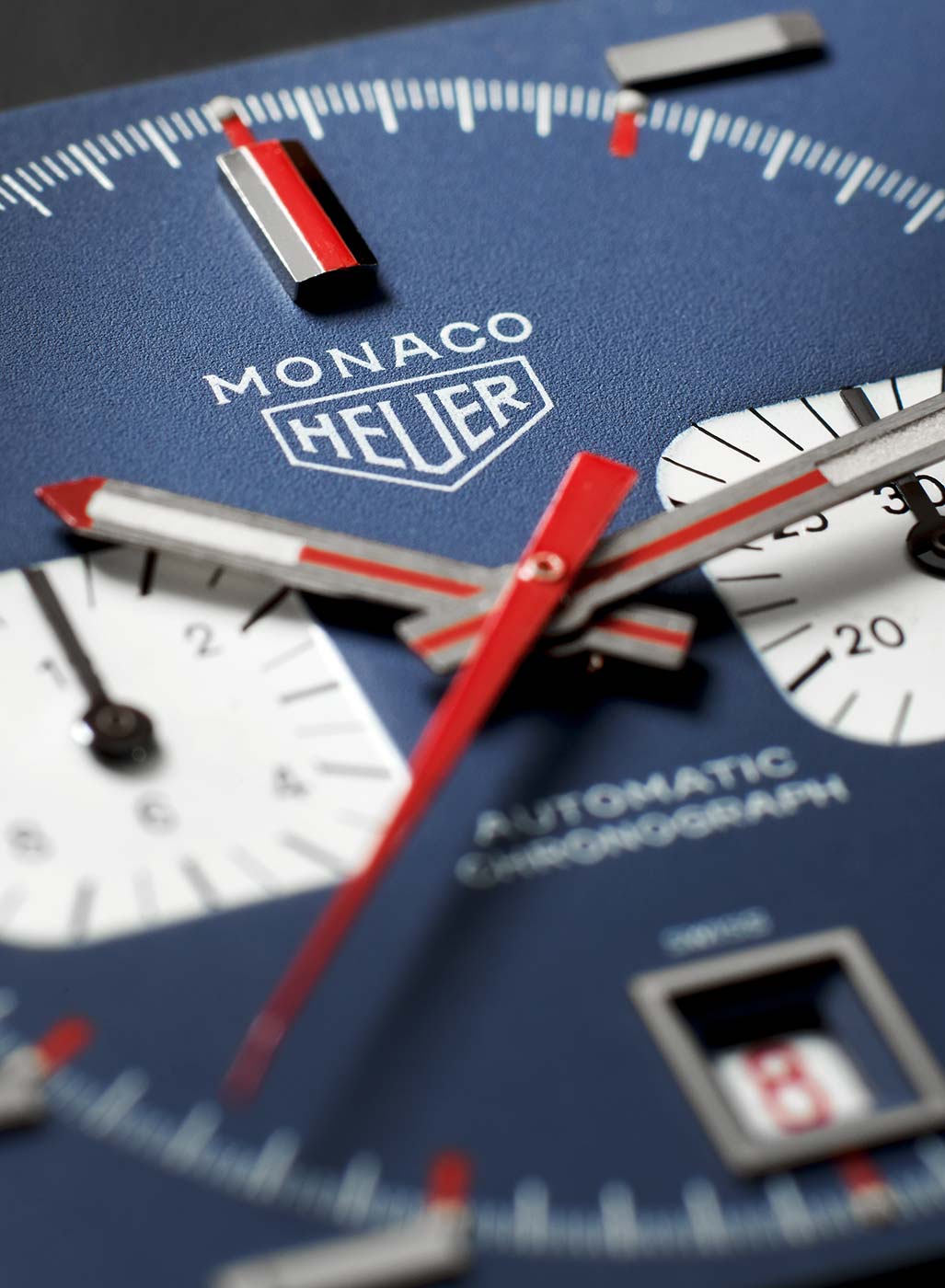 A stunning work of artistry and watchmaking craftsmanship, the Monaco Piece d’Art is TAG Heuer’s most unique tribute to the iconic Monaco, launched half a century ago. 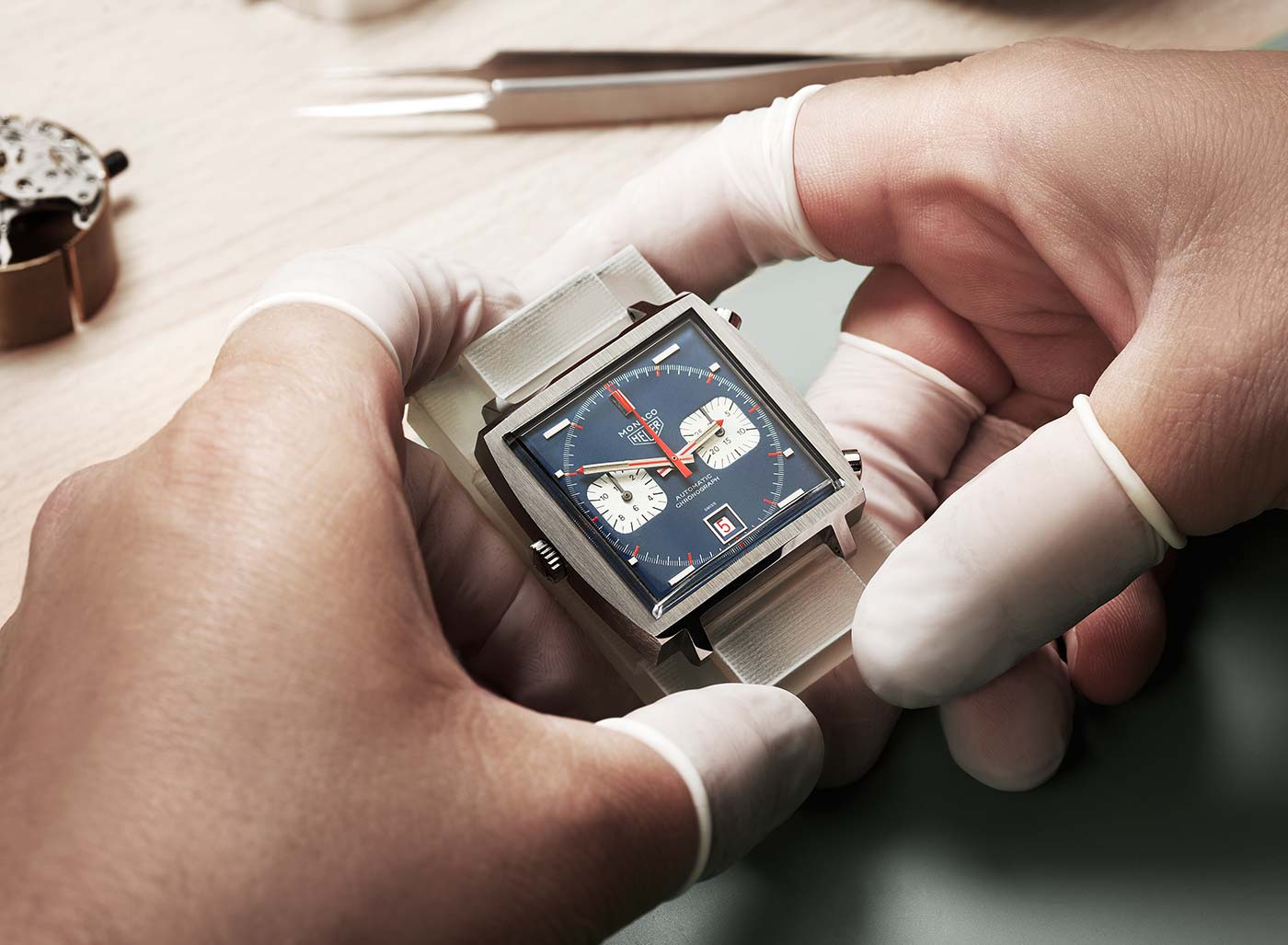 La Chaux-de-Fonds, Switzerland – 25 October 2019: As a culmination of the 50th-anniversary celebrations of the Monaco, TAG Heuer has created the one-of-a-kind Monaco Piece d’Art. This restored and decorated version of an original 1969 model of the iconic timepiece (reference number 1133B) will be submitted to Phillips in New York for the Game Changers watch auction, set to take place on 10 December 2019. Proceeds from the auction will be donated to the US charity United Way of New York City. Dedicated to improving the lives of underprivileged children and families, TAG Heuer will support United Way of New York City’s education campaign ReadNYC.

The Monaco Piece d’Art was reworked by TAG Heuer’s in-house experts in the Vintage After-Sales department. Selected from the TAG Heuer Museum at the brand’s headquarters in La Chaux-de-Fonds, Switzerland, the timepiece features the original Calibre 11 – the first automatic-winding chronograph movement, launched in the Monaco in 1969 – and the original steel bracelet.

“In the lead up to this significant milestone, the Heritage department wondered what gift it could offer the Monaco for its 50th anniversary. We decided to create a one-piece edition: a work of art that commemorates our icon and pays tribute to its uniqueness. We have taken original components and decorated them – something that has never been done”, explained TAG Heuer Heritage Director Catherine Eberlé-Devaux.

The most outstanding aspect of this unique timepiece is the decorated movement, now visible through the transparent caseback. Initially, the caseback was closed, but the highly skilled watchmakers at TAG Heuer cut out a circle of the stainless steel and replaced it with sapphire crystal. This enhancement provides an unobstructed view of the decorated movement within. The watchmakers disassembled the movement and components and worked on every part of the chronograph module. This included bevelling all the components and enhancing the parts with straight graining, mirror polishing functional surfaces and screw heads, and adding three new jewels to bring the total to 20 rubies. The most impressive artistry is visible on the bridges; engraved by hand, in a font reminiscent of the style of the 1970s, the words “Cal. eleven” feature on the chronograph bridge for the minute and seconds counter, with “Monaco” appearing on the hour counter bridge. The two bridges had to be remade, as the originals were too thin for the elaborate engraving work. The date disc was also replaced, with the numerals now in red instead of black. 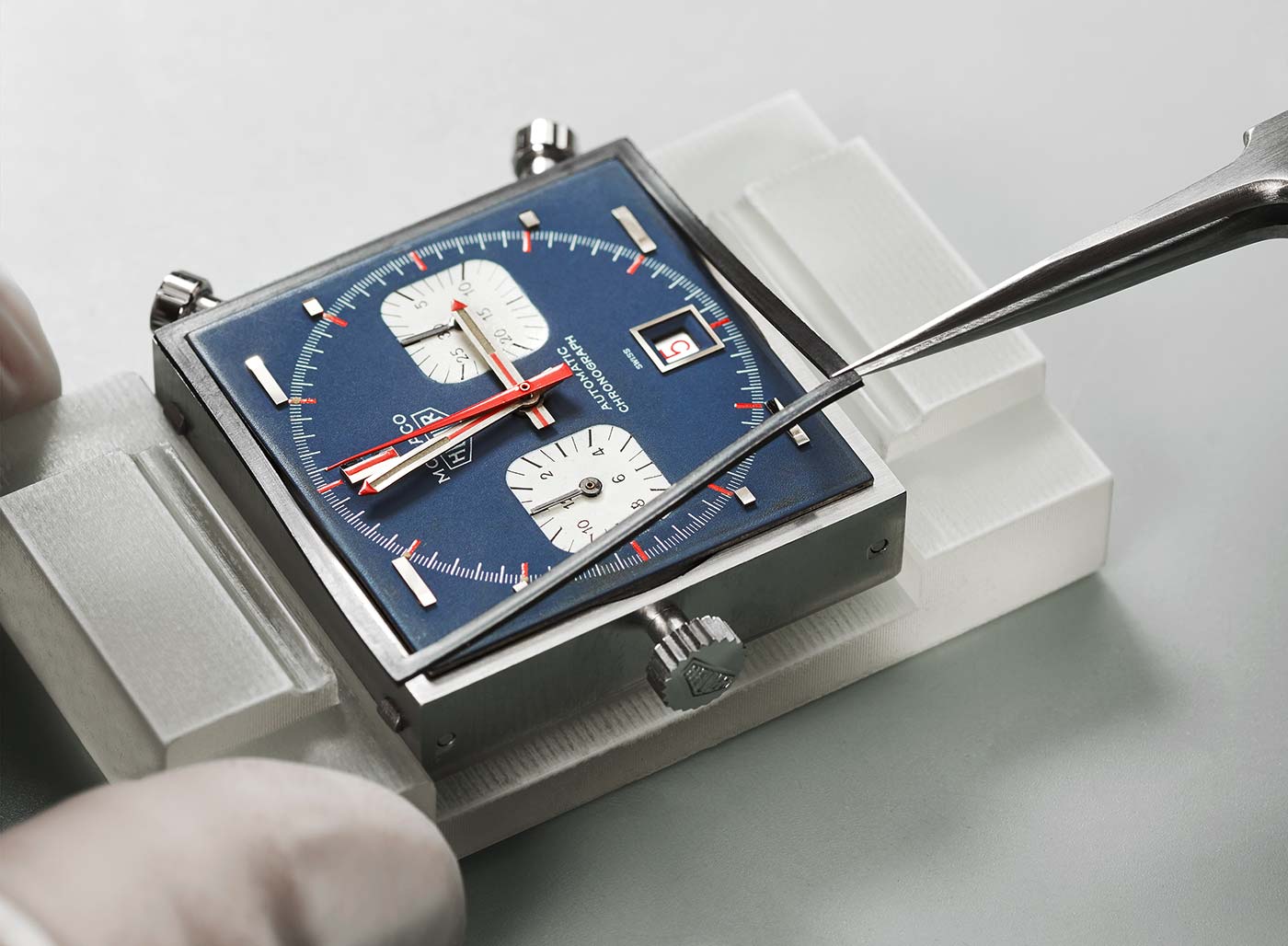 Decorating the timepiece by hand required the highest level of craftsmanship. Four expert watchmakers worked on the Monaco Piece d’Art for a period of three months. They even had to create special tools for the work, because what they required did not previously exist. There was absolutely no room for error and the decoration needed to be completed exclusively by hand, as a machine would not have been able to judge the quality of the work. This human touch allowed each of the watchmakers to leave their mark on the movement, case and overall aesthetic, enhancing the originality and value of the final timepiece.

A watch box that contains the whole story

The Monaco Piece d’Art is presented in a special wooden box decorated with red lacquer. The white leather interior holds the stainless-steel circle cut out from the caseback and a loupe. The historic Monaco leaflet that came with the original timepiece is also included. The intricate caseback is captured in a piece of artwork by renowned visual artist Julie Kraulis. The 18 × 18-inch black-and-white drawing is framed in the same wood as the watch box. A copy of Paradoxical Superstar, signed by TAG Heuer’s Honorary Charmain Jack Heuer, comes with the distinctive watch. The book was published in honour of the Monaco’s 50th anniversary and includes archive excerpts and sketches of the designs and movements of the iconic timepiece.

A year of celebration 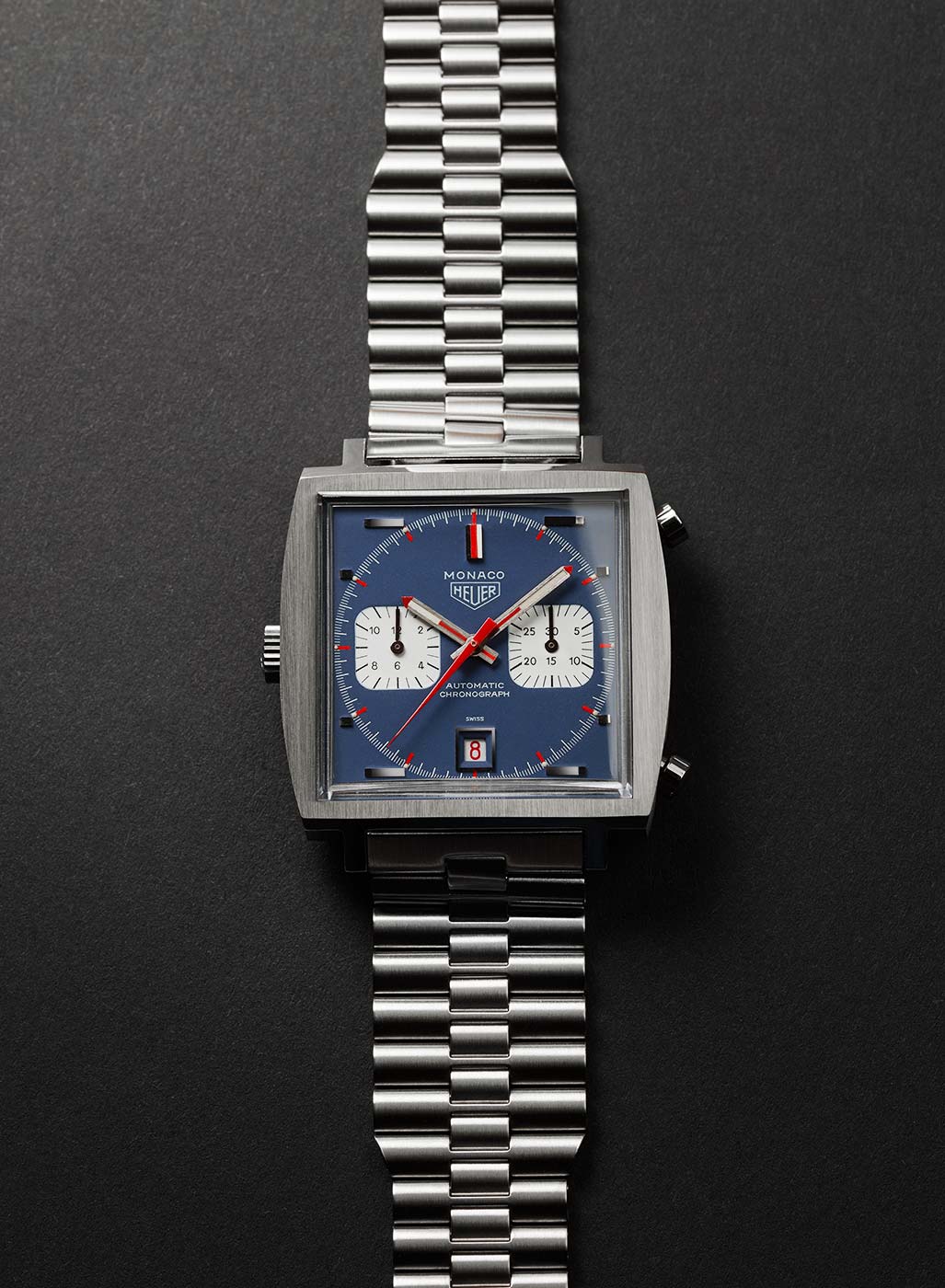 Chronograph with seconds, minutes and hours; date, hours and minutes

In 1860, at the age of 20, Edouard Heuer founded his watchmaker’s workshop in the Jura Mountains of Switzerland. Creating the Mikrograph in 1916, sponsoring Formula 1 teams in the 1970s or launching the first luxury connected watch in 2015 are just a few examples of the major technical innovations, ultimate accuracy and passion for disruptive design that define our unique spirit. Headquartered in La Chaux-de-Fonds, TAG Heuer operates in four production sites – mastering the whole watchmaking process – and is represented on all continents through 4,500 points of sale, including 170 TAG Heuer boutiques that are now directly available on www.tagheuer.com in selected countries. TAG Heuer timepieces are designed for those who love challenges. Our influence is enhanced by our unique communication based on three pillars: sport, lifestyle and heritage, embodying our legacy and DNA. Our partnerships and ambassadors illustrate our open-minded and open-door culture, with the most prestigious and avant-garde names teaming up with TAG Heuer: the Red Bull Racing Formula One team, the Formula 1 Monaco Grand Prix, the Formula E Championship, the biggest football leagues in Europe, the Americas and Asia, Manchester United, trendsetter Cara Delevingne, and actors Chris Hemsworth and Patrick Dempsey.

#DontCrackUnderPressure is much more than just a claim – it’s a state of mind. Find out more at www.tagheuer.com

All press material can be obtained free of charge at https://presscorner.tagheuer.com/directlogin

On the Fashion Map: 8 Emerging Asian Designers to Know