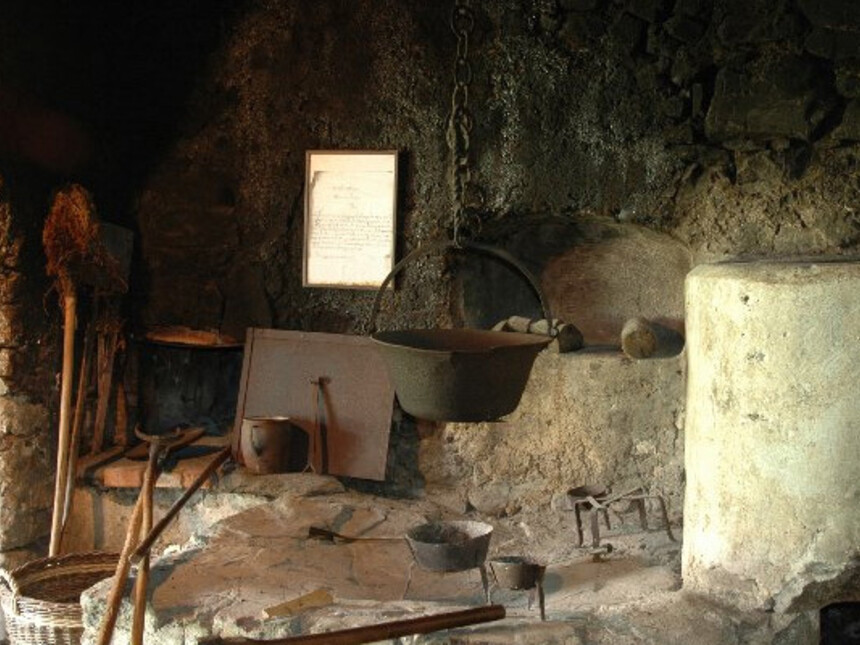 The house of the Oplen homestead is the elongated type, which, under the same room, houses the living as well as the working areas. It is one of the rare houses in which it is still possible to start a fire in the hearth of the black kitchen. The building is made of brick and wood, while the driveway to the bridge that leads to the barn above the stable runs alongside the living quarters, which is an architectural design peculiar to the Bohinj region.

The living quarters are comprised of an entrance hall with a kitchen, “a house” and a room (the “kamra”), and an attic and basement. The black kitchen with a chimney is separated from the entrance hall by an arch – the “šipovnik”. In the kitchen there are three fireplaces: an open hearth, an oven and a brick kettle for cooking pig-feed. Even today the smoke from the black kitchen rises to the ceiling of the attic.

The house is the central living area with a table under the domestic altar (the “bogkov kot”), benches and clay stove topped by a bed, the so-called “pungrat.” In the last century the house was in the wintertime, used for weaving, a fact attested to by the exhibited house looms. The “kamra” was primarily a bedroom, but also, as an old document proves, the room used by the retired former owner of the estate. Wheat and other produce, as well as clothes, shoes, tools and so on, were kept in the attic, the so-called “ispa,” and also in the partitions and chests. A lot of farming land was attached to the house in the last century, a fact attested to by the, for the period, large stable, barn and a separate storage area for litter. The last owners had little farming land but a lot of forest, therefore they only raised a small number of goats, and to feed them, hay and foliage was kept in the barn. Just as in the old days, the barn still houses farm tools and utensils, such as the rack wagon, the “krtiči” sledge, the manure basket, tools used for splitting shingles and fixing wooden objects, a whetstone, and so on.

The current building was most likely built in the beginning of the 19th Century and replaced the older, wooden house, since they used a beam with three small windows in the construction of the cellar ceiling. During the archaeological excavations in the entrance hall and kitchen many 19th Century coins were found.