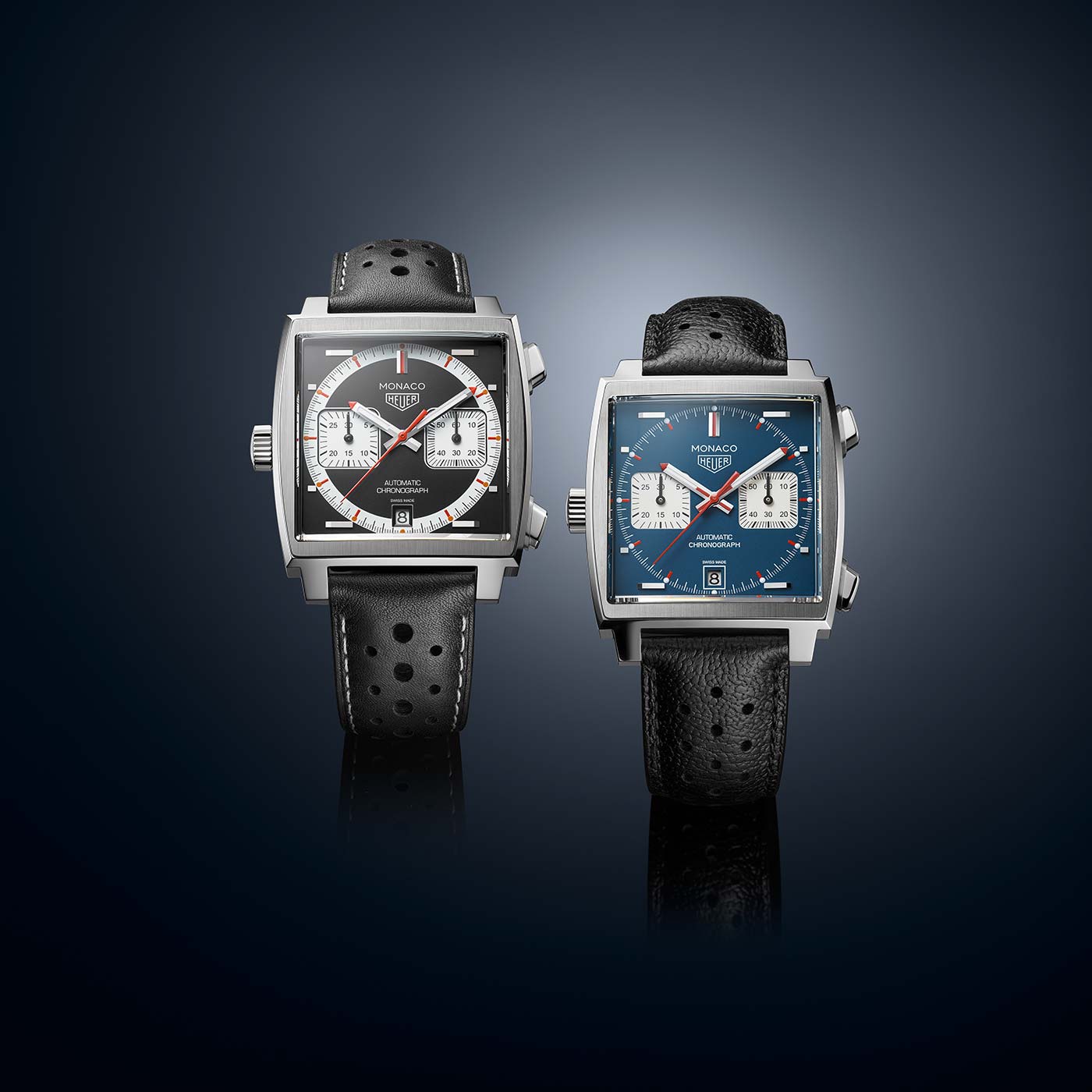 TOKYO, JAPAN – 25 September 2019: Yesterday, TAG Heuer celebrated the unveiling of the fourth timepiece in the Monaco Through Time saga in the Gallery of Horyuji Treasures at the Tokyo National Museum in Japan. Celebrated for its daring contemporary design combining beauty and functionality, Japan was an ideal place to honour the legendary Monaco and the bold design that has set it apart from all others for half a century.

The event kicked off with a stunning drone performance in front of the museum. The drones were equipped with 6,000 LED lights that lit up to represent the design of the Monaco’s flange. The animation reflected the ‘00s style of this anniversary edition bringing together the contemporary architecture of the venue and the timelessness of the renowned Monaco timepiece.

In the gallery, guests could admire heritage pieces, novelties and the previous three editions of the Monaco anniversary collection. DJ FPM set the mood throughout the cocktail party with his unique style and throwback tunes from the early 2000s.

Starting today, visitors of the TAG Heuer Omotesando Boutique in Tokyo can take a journey through the brand’s history, exploring famous and rare pieces from TAG Heuer’s museum as well as a tributes to TAG Heuer’s involvement in motor racing and the iconic Monaco. This exhibition is open to the public from September 25 through October 1, 2019.

To honour the 50-year milestone, TAG Heuer is launching throughout 2019 five new Monaco models that capture the design spirit of each decade since the launch of the original in 1969. This event in Japan marked the unveiling of the fourth model. The first of these models, inspired by the years 1969 to 1979, was unveiled at the Monaco Formula 1 Grand Prix in May, and the second limited edition, celebrating the period from 1979 to 1989, was presented in June in Le Mans, France. The third edition of the new Monaco watch, inspired by the 1990s, made its grand debut in New York in July.

The host country was a fitting choice for this grand event. Contemporary Japanese design revisits traditional style and uses it as an inspiration to transcend everyday objects and give them greater meaning. The Monaco, with its revolutionary and impactful design, reflects this Japanese take on design. 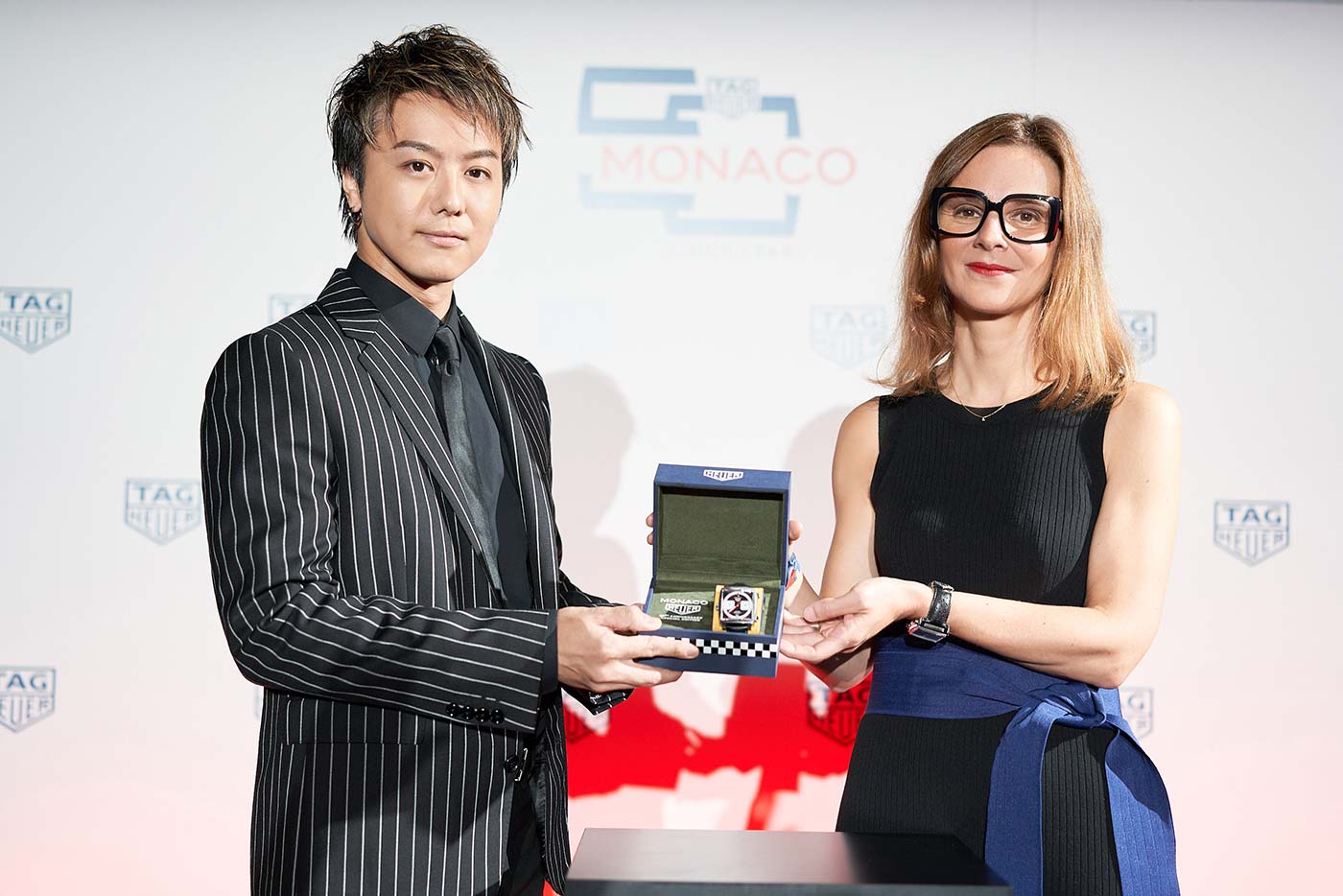 Capturing the bold architecture and daring design codes of the decade from 1999 to 2009, the fourth wristwatch in the Monaco Through Time line-up is a special collector’s edition with a classic black and white appearance that lets the unconventional shape of the watch truly shine. The white opaline seconds sub-dial and chronograph minutes counter stand out from the pitch-black background. Striking red and orange touches serve as stylish hour markers and the hour and minute hands and facetted applied indexes are filled with Superluminova for improved legibility. The stainless steel watch is presented on a perforated black calfskin strap with black lining and crisp white stitching.

As with the original, the pushers are on the right of the case while the crown is on the left – an unconventional feature that has distinguished the Monaco over the past 50 years.

The caseback of this 2000s-inspired wristwatch is engraved with the “Monaco Heuer” logo as well as “1999-2009 Special Edition” and “One of 169”. Sporting a design inspired by the original model, the stainless-steel caseback has vertical and circular brushed patterns and features a polished, vertical and circular brushed finishing. The case houses the renowned Calibre 11, a modern version of the automatic-winding chronograph movement that made its debut inside the original Monaco in 1969. This watch has been produced in an edition limited to 169 pieces.

When the Heuer Monaco (TAG was not part of the company name at the time) was introduced at simultaneous press conferences in New York and Geneva on 3 March 1969, journalists and watch aficionados around the world were amazed. With its never-before-seen water-resistant square case, the Monaco’s daring and iconic design made it instantly recognisable.

The watch’s design was the perfect complement to the advanced technology being presented by the Swiss watchmaker at the time. Developed and commercialised by Heuer, the Calibre 11 was the world’s first automatic-winding chronograph movement.

CEO at the time Jack Heuer believed that this ground-breaking innovation required a design that would demand attention. The Monaco did exactly that. In 1971, the Monaco was worn by Steve McQueen, the “King of Cool”, in the movie Le Mans.

Over the past two decades, the Monaco has been closely linked to Haute Horlogerie with other versions that feature new complications, designs and materials. As it evolves, the Monaco still has the revolutionary spirit that made it both infamous and famous. The complete story behind this icon is told in the new book Paradoxical Superstar, which includes archive excerpts and sketches of the designs and movements. British author and journalist Nicholas Foulkes, watch expert Gisbert Brunner and American writer Michael Clerizo all contributed chapters that capture the heritage and innovation that defines the Monaco. Underscoring the timepiece’s bond with its namesake city, H. S. H. Prince Albert II of Monaco wrote the book’s foreword. 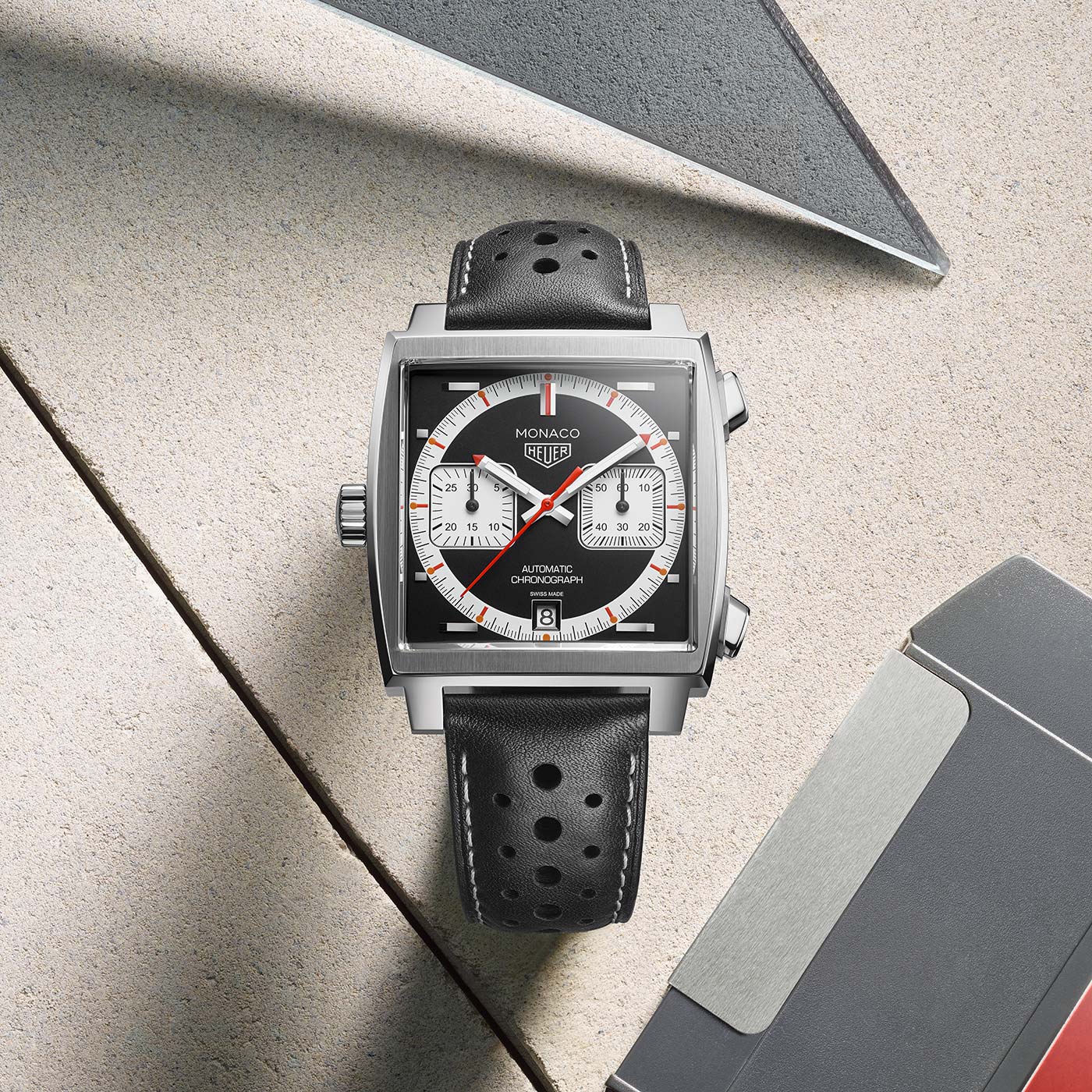 Like the watch itself, the watch box is also inspired by the original. Each of the special-edition models comes in a box with colours that match the watch and the decade it represents. The 2000s-inspired model is packaged in a dark blue box decorated with the Heuer logo and a horizontal check-pattern stripe. The watch is placed on a grey cushion and surrounded by an orange interior. 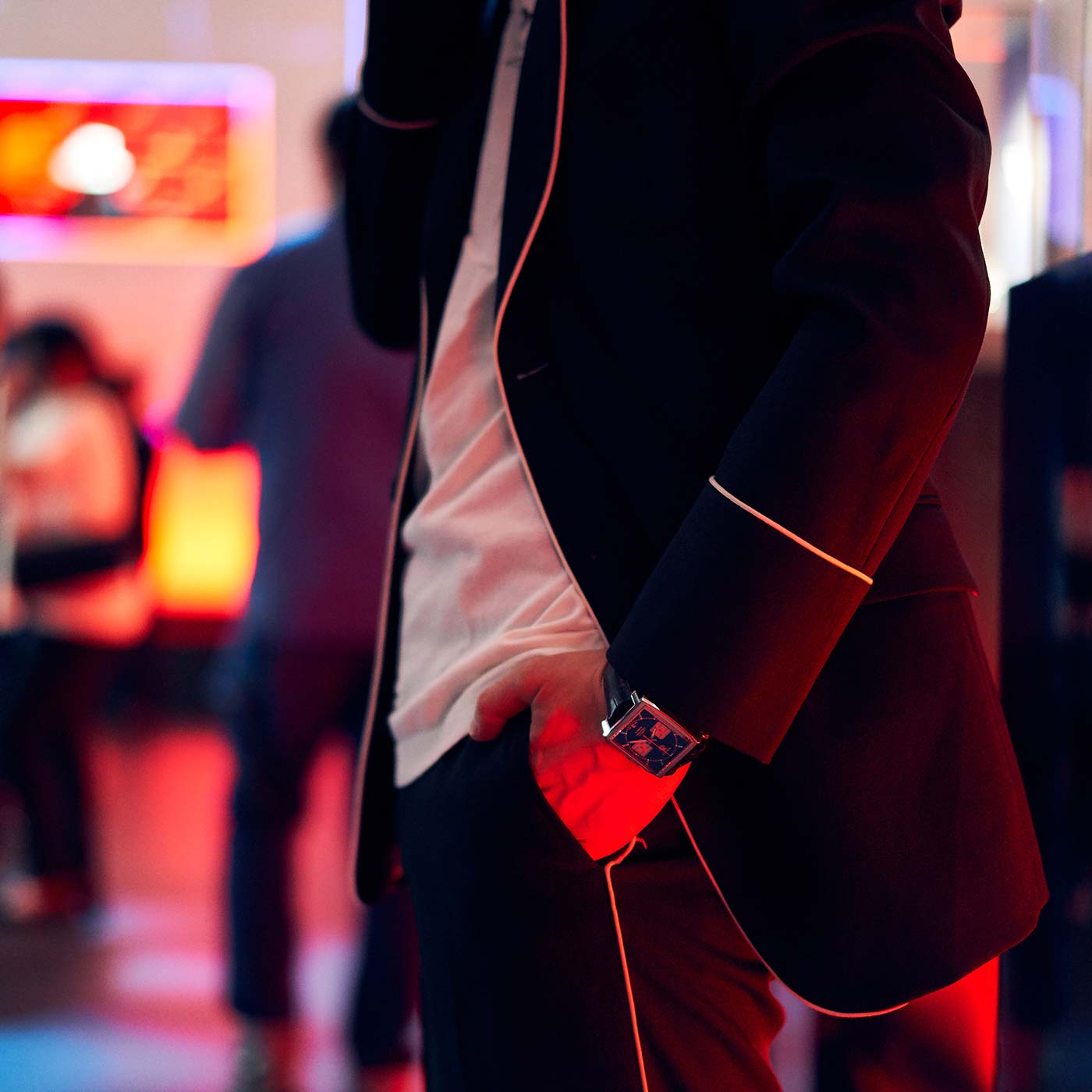 In 1860, at the age of 20, Edouard Heuer founded his watchmaker’s workshop in the Jura Mountains of Switzerland. Creating the Mikrograph in 1916, sponsoring Formula 1 teams in the 1970s or launching the first luxury connected watch in 2015 are just a few examples of the major technical innovations, ultimate accuracy and passion for disruptive design that define our unique spirit. Headquartered in La Chaux-de-Fonds, TAG Heuer operates in four production sites – mastering the whole watchmaking process – and is represented on all continents through 4,500 points of sale, including 170 TAG Heuer boutiques that are now directly available on www.tagheuer.com in selected countries. TAG Heuer timepieces are designed for those who love challenges. Our influence is enhanced by our unique communication based on three pillars: sport, lifestyle and heritage, embodying our legacy and DNA. Our partnerships and ambassadors illustrate our open-minded and open-door culture, with the most prestigious and avant-garde names teaming up with TAG Heuer: the Red Bull Racing Formula One team, the Formula 1 Monaco Grand Prix, the Formula E championship, the biggest football leagues in Europe, the Americas and Asia, Manchester United, trendsetter Cara Delevingne, and actors Chris Hemsworth and Patrick Dempsey.

#DontCrackUnderPressure is much more than just a claim – it’s a state of mind. Find out more at www.tagheuer.com

All press material can be obtained free of charge at https://presscorner.tagheuer.com/directlogin

Supremacy in the Baltic

AFTER IBIZA, HUBLOT CONTINUES TO CELEBRATE SUMMER IN MYKONOS WITH THE 8TH EDITION