The House of BOVET is proud to highlight the Engineering Brilliance presented in the three icons of the astronomic collection. The RÉCITAL 18 SHOOTING STAR®, RÉCITAL 20 ASTERIUM®, RÉCITAL 22 GRAND RÉCITAL® combine the decorative arts with watchmaking excellence in an innovative structure characterized by the emblematic “writing slope” case designed by Mr. Raffy.

Nine patents have been filed throughout the development of these three jewels of the high watchmaking craft, including one for the last creation, Tourbillon Récital 22 Grand Récital®, which was awarded the 2018 Aiguille d’Or at the Grand Prix d’Horlogerie de Genève.

In 2018, a jury formed of the greatest specialists in watchmaking awarded its highest distinction, the Aiguille d’Or, to BOVET’s Récital 22 Grand Récital. With its 5 patents, this timepiece invites the collectors and enthusiasts to observe the three heavenly bodies that set the pace of our lives: the sun, earth, and moon. The Récital 22 Grand Récital features hours, retrograde minutes, seconds on the double face flying tourbillon, precision moon phase, retrograde double-sided date, a 9-days power reserve as well as a retrograde perpetual calendar on the back.

This tourbillon forms the third chapter in the poetic watchmaking narrative that started in 2016 with the launch of the first astronomical timepiece, The RÉCITAL 18 SHOOTING STAR®. With the objective of providing a celestial vision of the earth while making it possible to read its twentyfour time zones simultaneously, this precious timepiece provides a more intuitive, innovative vision of telling the time based on two of the heavenly bodies that define it: the earth and moon.

Continuing the narrative, in 2017, the House of Bovet launched RÉCITAL 20 ASTERIUM®. Inspired on the fact that the position of the stars in the sky defines time, a celestial dome was chosen to occupy the “star” function of this BOVET timepiece. The stars and constellations that are visible from the earth have been charted on a translucent blue quartz dome. The stars are coated with Super-LumiNova® for a realistically scintillating sky. The celestial dome and all the sidereal
indications of the Astérium® are driven by an annual calendar calculated on a cycle of 365.25 days to correspond with the real duration of the earth’s full orbit. This combination of the display mode and timekeeping exactitude enables the instantaneous display of the stars’ position in the sky with unrivaled precision.

Together, each one of these timepieces challenged the House of Bovet’s watchmakers, artisans, and Mr. Raffy to continue innovating the art of precision of time. 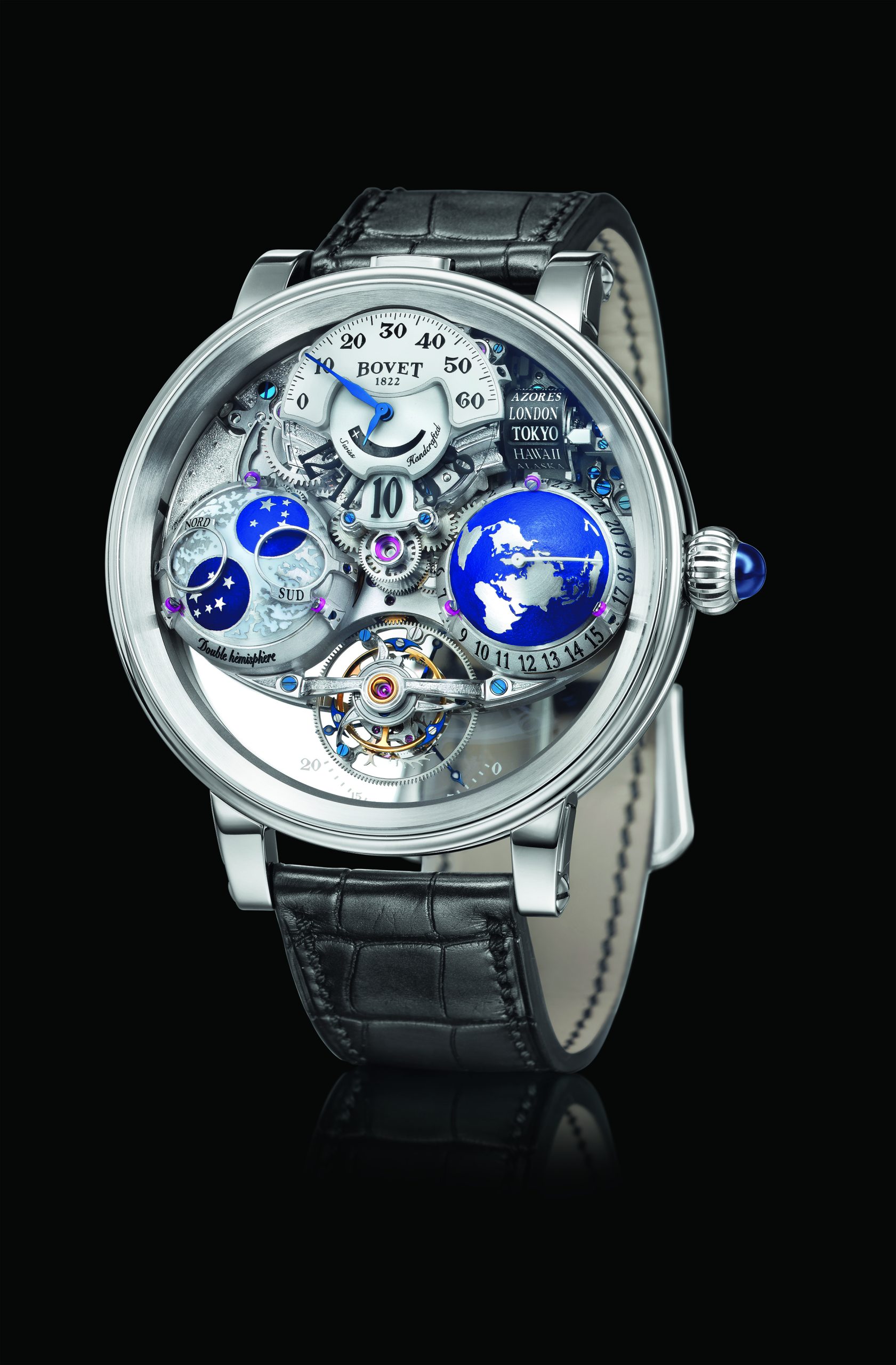 The trilogy begins with the first astronomical timepiece launched by Maison BOVET. The objective was to provide a celestial vision of the earth while making it possible to read its twenty-four time zones simultaneously. Thus providing a more intuitive, innovative vision of telling the time based on two of the heavenly bodies that define it: the earth and moon.

Two hemispheres occupy the space: the universal time at 3 o’clock and the moonphase indicator at 9 o’clock.

Bovet’s first three-dimensional hemisphere, the earth, appears at 3 o’clock. A set hand at the North Pole follows its entire curve. The concentric ring along its edge displays the selected time zone, while the name of the city corresponding with that time zone appears on one of the concentric rollers indexed to the hemisphere. A single hemisphere therefore simultaneously provides the exact time of each zone on the earth; which is a most useful complication.

This universal time is completed by a moon phase indicator in the form of a hemisphere located at 9 o’clock. Two circular display windows fit against the curve of this lunar hemisphere and indicate the phase of the moon as it is observed respectively from the northern and southern hemispheres of the earth. The moon’s surface and the starry sky alternately appear in the two display windows. The moon phase indicator is driven by a precision mechanism. It only requires
a correction of one day every 122 years.

The space located at 12 o’clock features a jumping hour display, retrograde minutes and the 5-day power reserve. The combination jumping hour and retrograde minute display poses the technical problem of synchronizing instant jumps. This complication is perfectly mastered, and has already met with great success in other Bovet timepieces.

In all, seven domes – including the four hemispheres of the movement, the dials, the tourbillon cage and the overarching crystal – add an ultimate symbolic touch to this timepiece. 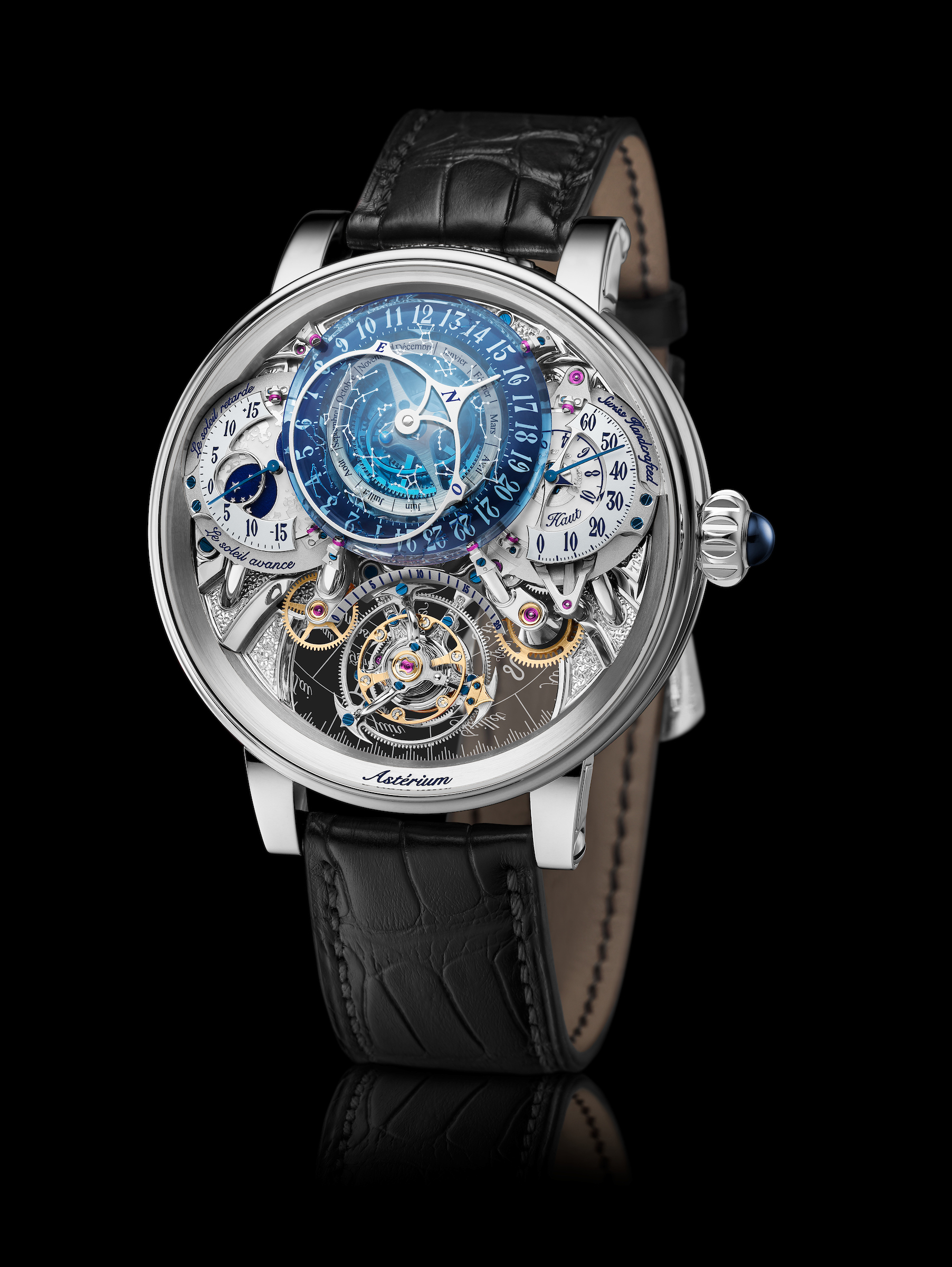 The position of the stars in the sky define time. Based on this observation, a celestial dome was chosen to occupy the “star” function of this BOVET timepiece. The stars and constellations that are visible from the earth have been charted on a translucent blue quartz dome. The stars are coated with Super-LumiNova® for a realistically scintillating sky.

According to the sidereal calendar, the celestial dome and all the sidereal indications of the Astérium® are driven by an annual calendar calculated on a cycle of 365.25 days to correspond with the real duration of the earth’s full orbit. This combination of display mode and timekeeping exactitude enables the instantaneous display of the stars’ position in the sky with unrivaled precision.

In the 9 o’clock position is a precise hemispheric moon phase display with the equation of time indicator. At 3 o’clock is a double hemispheric indicator of the power reserve and its 10 days of autonomy on an inner dome which rotates beneath a fixed hand. The retrograde minute hand is superimposed over it on a peripheral display.

In keeping with astral reality, the hours rotate concentrically to the celestial dome on a twentyfour hour dial. The hour hand is designed to simultaneously combine three functions. It indicates the hours, points to the north to facilitate map-reading, and bears the elliptical window characteristic of the night sky.

The second, a basic time measurement, is driven by the patented double face flying tourbillon, which is equipped with a variable inertia balance wheel.

A single barrel releases the energy of the timepiece and maintains the oscillations of the balance wheel at a frequency of 18,000 vph for 10 days of autonomy. This power reserve remains entirely unaffected despite the many indications and the technical intricacy of their displays. The domes are adjusted by patented variable micrometric bearing-blocks composed of ruby runners. The ingenious mechanism is extremely energy-efficient.

At the back is a transparent sapphire dial that covers the entire movement and bears a multitude of gradations relating to astronomical indications through which a single central hand travels. This hand is driven by the annual calendar, and therefore performs a complete rotation precisely once every 365.25 days.

On the back bezel are annual calendar gradations (days and months) which is used to precisely regulate the starry sky. The central hand also runs along a gradation indicating the Zodiac signs, symbolized by the constellations in front of which the sun appears throughout the year. The sun is finely hand-engraved and riveted to the part of the hand that passes over this gradation. Further inwards, the seasons – and lastly, the solstices and equinoxes – are displayed.

With its 5 patents, the timepiece invites you to observe the three heavenly bodies that set the pace of our lives: the sun, earth, and moon.

The sun is represented by the flying tourbillon, whose carriage bridge evokes fiery rays. The tourbillon carriage has been raised above the surface of the movement. Its original patented construction is characterized by its central attachment, endowing the timepiece with exemplary chronometry, while achieving a peerless level of transparency.

The earth is represented by a hemisphere with luminescent substance. Its surface is adorned with an engraved and hand-painted map. The earth rotates on its own axis and shows the hours on a natural 24-hour cycle. As in reality, it naturally performs one anti-clockwise rotation every 24-hours. The hour is situated between the tourbillon and the globe. Lastly, a spherical moon orbits the earth according to the exact length of its synodic period, i.e. 29.53 days. The sphere is divided into two parts: one black, while the second is engraved with the textured surface of the moon. The engraved sections of the second half are filled with a luminescent substance, which makes it possible to clearly see which part of the moon is directly illuminated by the Sun.

If this is not enough complications, the back features a perpetual calendar. The perpetual calendar is driven by a retrograde mechanism with a patented micrometric rack, which optimizes operation while reducing the amount of required space.

These awe-inspiring complications are cased in Bovet’s trademarked design which was inspired by the shape of a writing slope desk. The case measures 46 mm in diameter and is inseparable from the structure of the movement.

The Best Nasi Lemak in Singapore, According to Local Chefs

A Whimsical World Of Cars

This Patek Philippe Watch Could Sell for US$7.7M