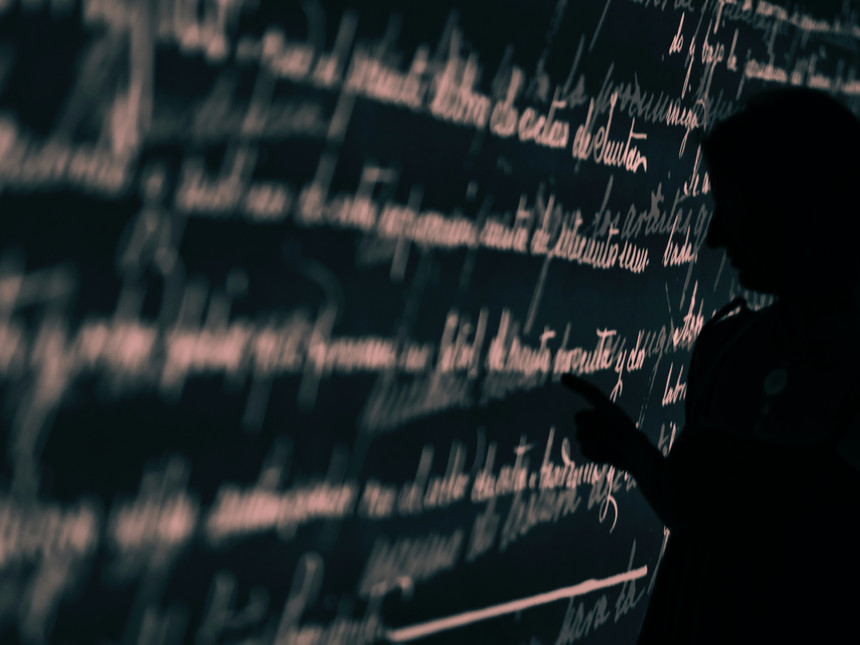 Anyone surprised by this reflection should know that language is a very strange thing. Although language can be an object of scientific study, it is not a philosophical subject like any other. Language can be studied, but at the same time it is the means to do so. We cannot speak about language without language. To speak at all is to speak about something, so there is an intimate relationship between words and whatever we use words to refer to. Or, as Francis Wolff puts it: “le langage fait monde,” while ‘telling the world,’ language becomes world. This becomes all the more clear when we think about aspects of the world for which we have no language. What we ‘perceive’ for which we have no words cannot easily be shared; it remains private perception. If we want to communicate about something, we need words. Thanks to language, the world becomes a shared reality.

This means two things: should things not exist in the world, even in our thoughts, we would have no words to speak of them. And should we have no words, the things we perceive would have no shared meaning. In other words, our view of the world depends on the way we use language to communicate about it.

There is more. Either the things we perceive are an identity, an essence, about which there can be only one way of speaking – something is what it is, for which there is but a single word, which excludes dialogue; or, if that essence is not there and everything is change and chance, then we are trying to speak of something that cannot be defined. In the latter case, neither communication nor dialogue is possible, because we are grasping at something that is not really there or at least has no essence. In this way, it becomes clear how every essence-thinking and every absolute relativism makes communication and dialogue impossible.

Francis Wolff thus opts for an intermediate solution, an imperfect language-world that we need to make communication possible. We act as if the essence were there, but we accept that we can say different things about it. Dialogue requires us to identify differences. In short: democracy, the organized difference of opinion, depends on our acceptance of imperfection, on our pretending there is essence and on our belief in different ways of talking about it. From this perspective, there is not a single world, but rather different possible worlds.

If we could live with this truth and navigate it critically, life would remain relatively simple. But that’s not how society works. We need meaning, certainly, but often an equal need to impose our own meaning on others. Then it happens that we co-opt words that have already acquired a precise meaning to mean something else. Only then does the great confusion begin. Following Berger and Luckmann’s sociology of knowledge, language realizes a world. Language is used by people, groups and institutions to construct a world – a reality, and language is used by individuals to apprehend such a reality: through conversation, the reality of the world that language objectifies becomes an object of individual consciousness, by which a social reality can be shared.

This is a long and hopefully not too tedious introduction to the great confusion of concepts in political discourse that exists today. There is a lot of talk about fake ‘truths,’ and this does not always have to do with something that is verifiably wrong, such as claiming election fraud where there is none. Fake truth also arises through the misuse of words, by giving a new meaning to words – unnoticed. This creates a different ‘social reality’ because it is often the product of a single speaker, institutional or otherwise, but it is usually the deliberate misleading of readers and listeners who think that a conventionally established meaning is being referred to, when that is no longer the case.

I want to give a few concrete examples, to show how we can unwittingly end up in someone else’s reality, due to them giving new meaning to existing words.

Social protection is perhaps the most dramatic example. All over the world, governments have looked for mechanisms to protect citizens against illness or loss of income. These mechanisms, based on solidarity and rights, took their most elaborate form in Western Europe and some countries of Latin America. They were called ‘welfare states’ and in principle – but not in fact – they were universal. They were closely linked to the process of industrialisation and the wage-earning society, which grew strongly from the nineteenth century onwards.

It was also the model advocated by development thinkers for the countries that gained independence in the twentieth century. Social protection was seen as a means of breaking down ethnic differences and community ties. By giving people security, they became less dependent on their communities and could more easily respond to the expectations of the labour market. In this way, it was also thought, it was easier to create national cohesion for national development projects. This is brilliantly described in Lester Pearson‘s famous report.

It never really worked in the countries of the South. From the 1990s onwards, international institutions proposed to start with ‘poverty reduction’ and with an implicit campaign against forms of social insurance. From then on, according to the World Bank, governments were only responsible for supporting extremely poor people. All others could buy insurance on the market.

In that line of thought, developed over several decades, the purpose of social protection changed completely. It was no longer a policy to insure against the whims of the market, but an incentive to participate in the market. The World Bank now also speaks of ‘social protection‘ but it remains a poverty policy with very minimal solidarity. The ‘social contract’ that comes with it is not the result of a democratic debate between government, the market and civil society, nor a question of rights and duties. Today it is a matter of adapting to the market, not of regulating or adjusting it.

We still talk about ‘social protection’ today, but the concept has taken on a completely different meaning from what it used to be. Even in the countries of Western Europe, where the ‘old’ system still exists, a new paradigm is being introduced through step-by-step changes. The words remain, but the values underpinning them, and thus the policies, are changing.

Basic income is another concept that now hides a multitude of meanings. Although Thomas Paine or even Milton Friedman are often referred to for the origin of the idea, Philippe Van Parijs‘s original concept was very clear: a basic income creates ‘real’ freedom by granting an unconditional amount of money to everyone, rich or poor, working or not working. This amount should be high enough to allow someone who did not want to work to live in dignity and “go surfing in Malibu every day.”

The idea was particularly popular with ecological and left-libertarian movements that saw in it an opportunity to promote voluntary community ties and to make total individual freedom possible.

Such a system is necessarily very expensive and difficult to combine with the existing social protection with health care, support for young families or disabled people. That is why even the greatest advocates switched to a limited amount, which unfortunately also meant that total freedom disappeared from the agenda.

Still others, however, use the concept of ‘basic income’ for the financial support that can be given to poor people, a form of guaranteed minimum income. This is, however, a completely different philosophy. Today, the term is used interchangeably to refer to the two different policies, such that nobody knows exactly the concept being talked about. The reason may have to do with ignorance or with a deliberate avoidance of the difficult value debates to which a basic income may give rise. It does not make communication easier.

Finally, I would like to address a third confusion of concepts: charity vs solidarity. The meanings of both concepts are clear, yet they are increasingly used interchangeably.

Solidarity comes from ‘solidus’; a common responsibility, or in contemporary language ‘reciprocity.’ Social security is originally a system of solidarity: everyone pays to provide for everyone. Everyone gives and everyone receives, according to income and need, through redistribution.

There are many other examples, such as the way in which ‘freedom’ is spoken of in this COVID-19 crisis. It becomes absolute and individual, while forgetting that every freedom depends on the freedom of others and is therefore necessarily collective. Or think of the ‘dictatorship’ under which we live with the COVID Safe Pass, as if this had anything to do with the so-called violation of individual freedom that people grant themselves. Collective measures for public health then become impossible and unthinkable.

The ‘genocides’ taking place today should really be a matter of shame. Extreme poverty, as the UN Secretary-General Kofi Annan once said, may be something that kills, but it is not a genocide. Just as the reprehensible embargo against socialist Cuba is not genocide. Or the discrimination and persecution of the Uighurs in Western China.

Fortunately, for many of these political concepts we have precise definitions in international law. The victims of real genocides and real dictatorships in which there is no longer any freedom at all deserve respect. Their suffering must not be diluted in the ideological soup that some people make of it.

Social agreement on the values that underpin questions of policy and thus on the meaning of the concepts we refer to is of vital importance to be able to distinguish fact from fiction, to communicate with each other, to be able to say what must be condemned or must be improved and thus exactly what can and cannot be done. It sometimes seems like child’s play, but it is of the utmost importance to give concrete meaning to the democratic values we claim to adhere to. Everything hinges on the possibility of communication and dialogue. That must be nurtured. And for that we need words with clear and shared meanings.

Let this be a fervent wish for the new year.

SUMMER 2019, HUBLOT DECLARES THE SEASON OPEN ON THE ENCHANTING ISLAND OF IBIZA!