As Extreme E is gearing up for its second season, Zenith is unveiling the first in a series of special editions of the DEFY Extreme Carbon, incorporating recycled elements from the electric rally championship. The highly exclusive series will feature a limited edition for each of this season’s races, beginning with the Desert X Prix in the emerging futuristic city of NEOM. Located in north-western Saudi Arabia, NEOM is being built on a unique terrain alongside the Red Sea coast that boasts vast sand dunes as well as mountainous areas that have remained largely undeveloped and uninhabited, setting the stage for the perfect showdown in a raw and extreme environment like no other. 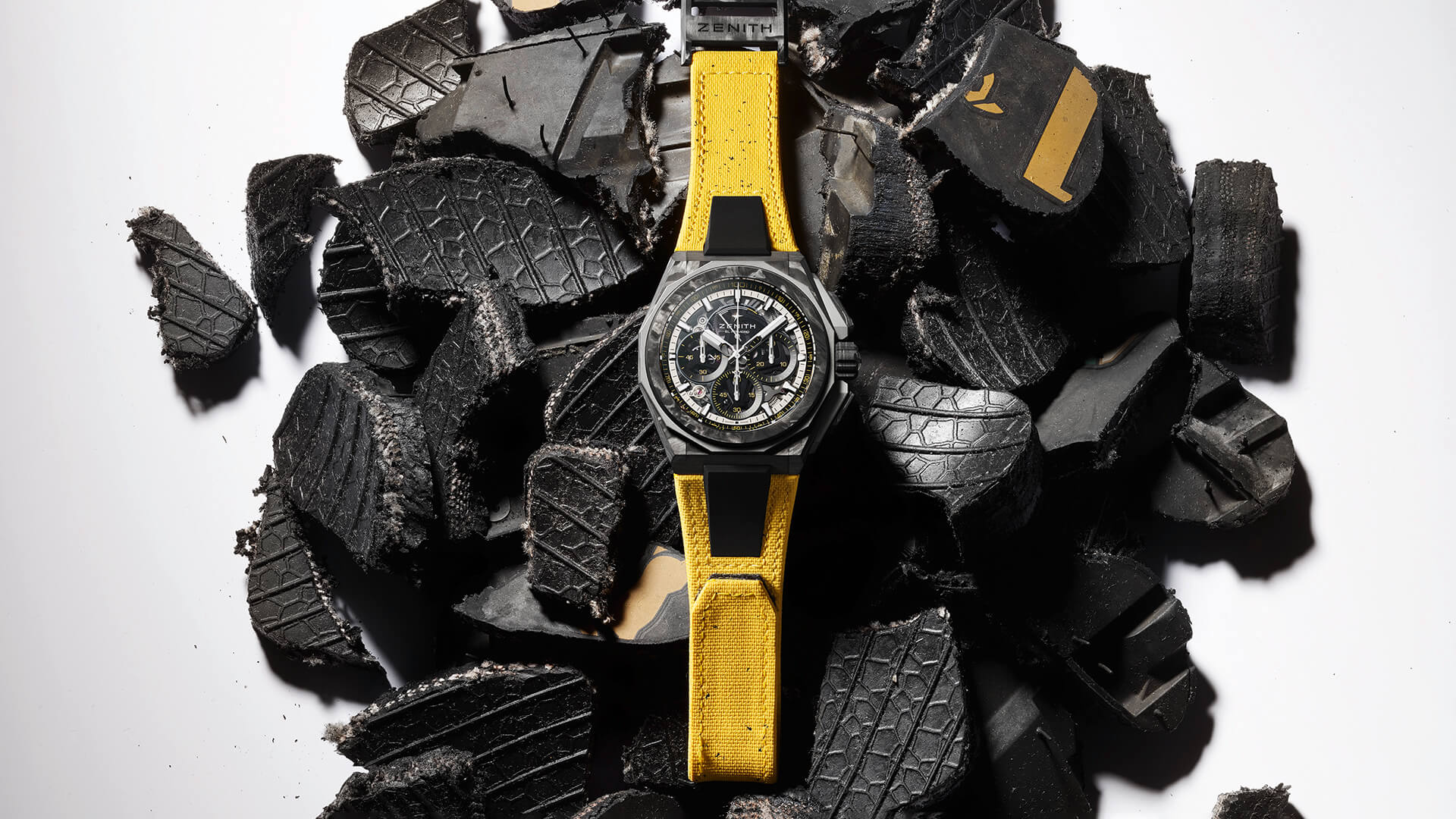 It’s time to warm up the electric motors. After a successful inaugural first season with Extreme E as its Founding Partner and Official Timekeeper, Zenith is getting even more involved with the world’s first electric rally championship in what’s shaping up to be a spectacular second season with more teams, new destinations and more environmental action. To commemorate each of the 5 Extreme E races this year – beginning with the Desert X Prix in Neom, Saudi Arabia – Zenith is creating 5 special and highly exclusive editions of the boldly rugged DEFY Extreme 1/100th of a second chronograph inspired by each of the vastly different X Prix off-road circuits.

Completing the Extreme E experience, the DEFY Extreme E “Desert X Prix” – the first edition dedicated to a specific race – is delivered in a suitably sturdy waterproof and crushproof watch case inspired by the extreme conditions of the rally, incorporating various upcycled elements from the side-lines of the first season’s races. The case’s lid coating is made from E-grip recycled tires, while the plate covering is made from parts of an Extreme E racing tarpaulin.

Perfectly adapted for the world of motorsports and specifically Extreme E’s adrenaline-infused off-road courses where every gram of weight can have an impact on the Odyssey 21 car’s performance as it makes its way through wild and often unforgiving terrains, the DEFY Extreme E “Desert X Prix” edition is crafted in astonishingly light yet highly durable carbon fibre, including the crown and chronograph pushers. Highlighting the audaciously angular geometry of the case, the pusher protectors as well as the twelve-sided bezel are made in microblasted titanium.

Within the monolithic case, the open multi-layered dial features deep yellow-beige accents, the official colour of the “Desert X Prix” that evokes the vast sand dunes of Saudi Arabia, home to the world’s largest continuous sand desert. Partially visible through the dial as well as the case back is the fastest automatic high-frequency chronograph calibre, offering1/100th of a second time measurements, with two escapements beating at 5Hz (36’000 VpH) for the timekeeping part and 50Hz (360’000 VpH) for the chronograph. The movement is also visible through the sapphire display back, emblazoned with the Desert X Prix logo.

As the ultimate Extreme E memorabilia, the DEFY Extreme E is delivered with a rubber strap containing sustainable materials of recycled Continental CrossContact tires that were used in the first season races. Matching the Desert X sandy yellow accents on the dial, the Velcro strap features a black rubber central element surrounded by a yellow cordura effect rubber inlay. The DEFY Extreme E “Desert X Prix” edition also comes with two additional straps in black rubber and black Velcro, which can be easily interchanged without any tools by using the case back’s ingenious and intuitive quick strap-change mechanism.

The DEFY Extreme E “Desert X Prix” will be made in a limited edition of only 20 pieces and will make its debut at the Extreme E Desert X race in NEOM, Saudi Arabia, on February 19-20, 2022. The watch will be available at Zenith’s physical and online boutiques around the world. 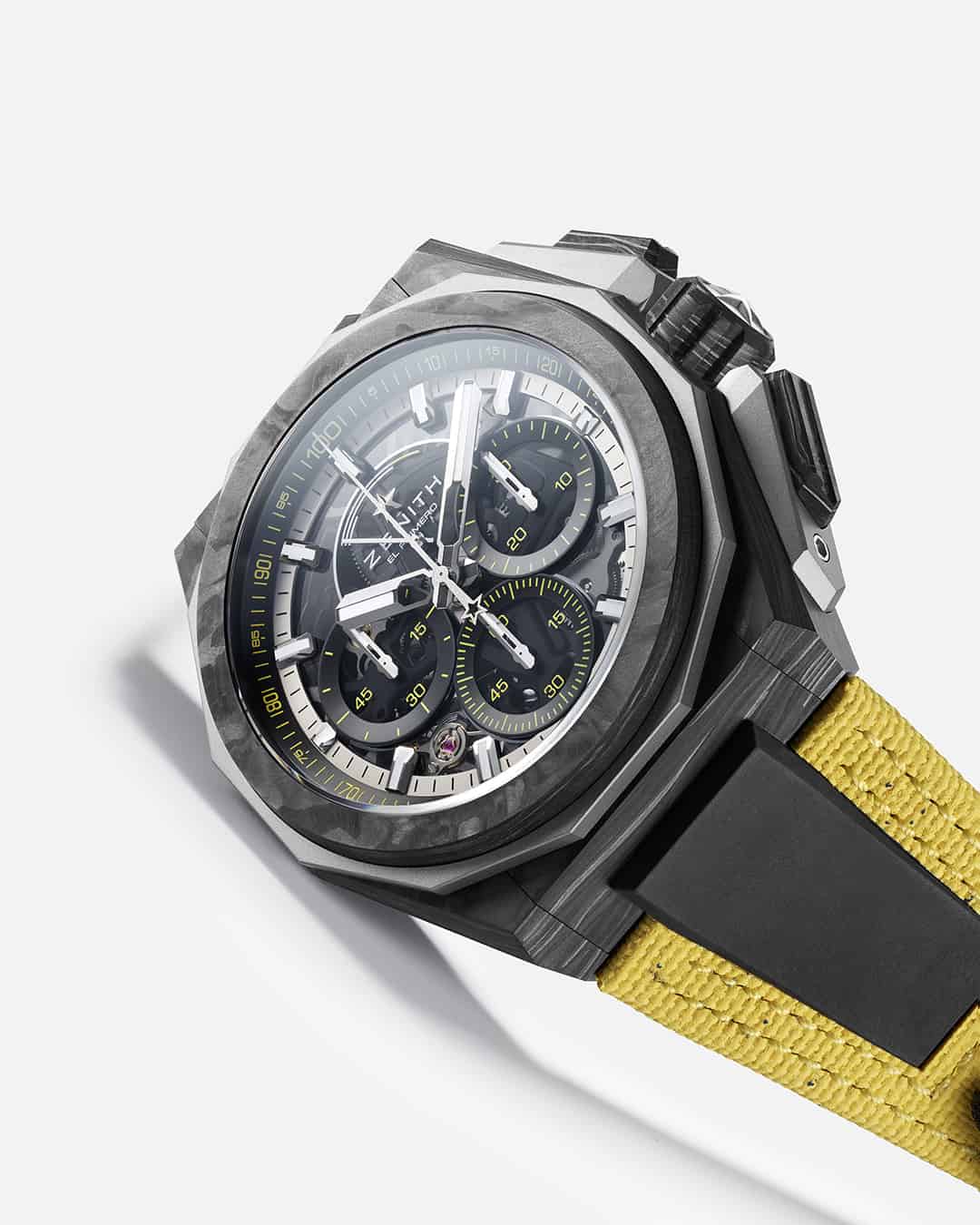 ZENITH: TIME TO REACH YOUR STAR.

Zenith exists to inspire individuals to pursue their dreams and make them come true – against all odds. Since its establishment in 1865, Zenith became the first watch manufacture in the modern sense of the term, and its watches have accompanied extraordinary figures that dreamt big and strived to achieve the impossible – from Louis Blériot’s history-making flight across the English Channel to Felix Baumgartner’s record-setting stratospheric free-fall jump. Zenith is also highlighting visionary and trailblazing women – past and present – by celebrating their accomplishments and creating in 2020 its first-ever collection dedicated entirely to them, Defy Midnight.

With innovation as its guiding star, Zenith features exceptional in-house developed and manufactured movements in all its watches. Since the creation of the El Primero in 1969, the world’s first automatic chronograph calibre, Zenith has gone on to master fractions of the second with the Chronomaster Sport and its 1/10th of a second precision and the DEFY 21 with a precision of 1/100th of a second. Zenith has been shaping the future of Swiss watchmaking since 1865, accompanying those who dare to challenge themselves and break barriers. The time to reach your star is now.

Functions : 1/100th of a second chronograph functions. Chronograph power-reserve indication at 12 o’clock. Hours and minutes in the centre. Small seconds at 9 o’clock, Central chronograph hand that makes one turn each second, 30-minute counter at 3 o’clock, 60-second counter at 6 o’clock

A Food Lover’s Guide to Paris This Summer 2022

Why NFTs Are the Next Mega Segment in Luxury? | Jing Daily